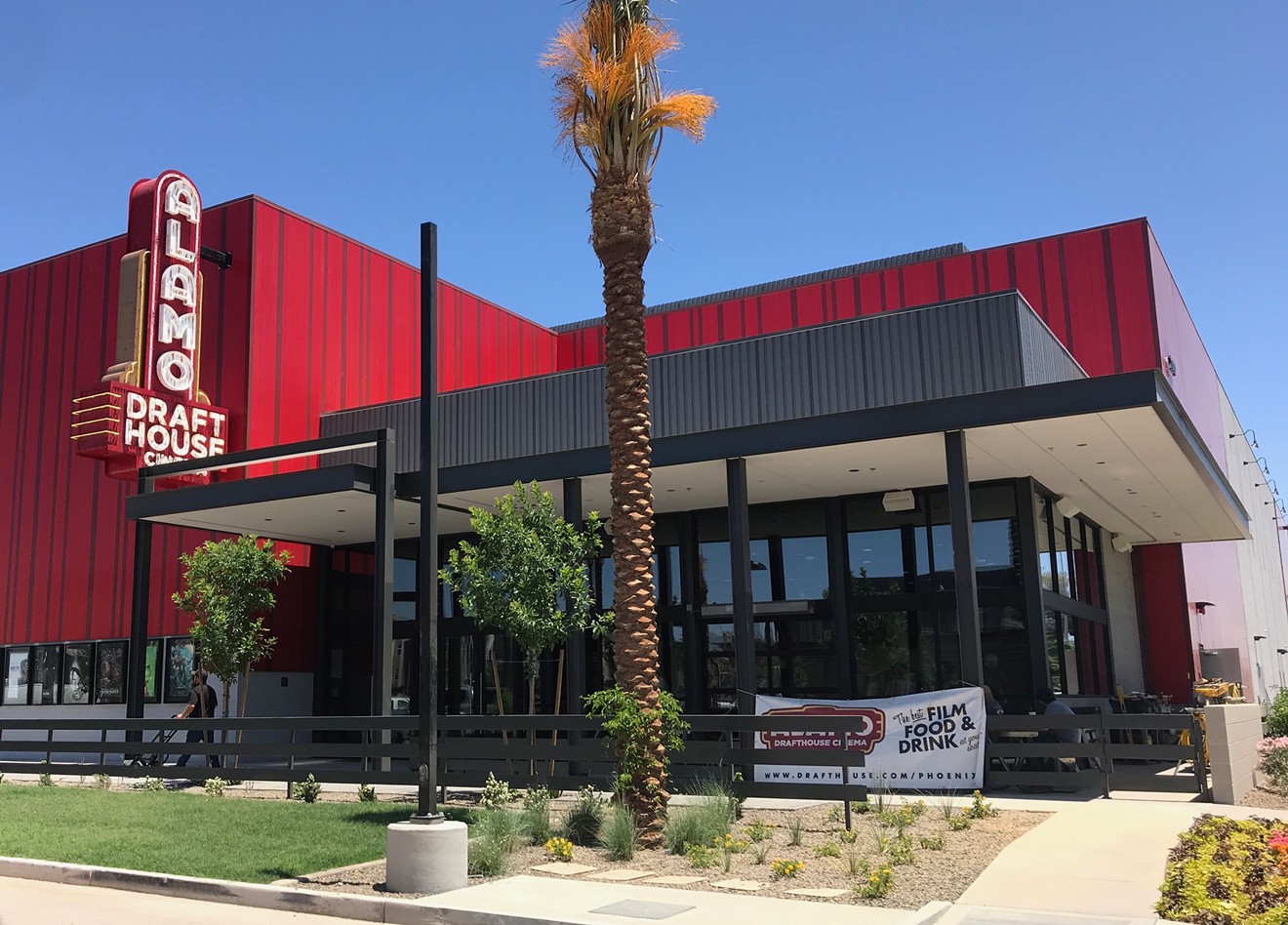 Approaching the entrance for a behind-the-scenes tour at Alamo Drafthouse Cinema in Tempe. Lynn Trimble

Like candy bars and Seinfeld episodes, having a favorite movie theater is, well, not exactly important. But knowing what you like and why? It makes all the difference, especially when you're looking to cool off with the latest blockbuster or indie must-see.

In metro Phoenix, moviegoers have plenty of great options. Everyone has his or her favorite movie theater – and for very specific reasons. This place has reclining seats, another has food, another has student discounts, and yet another has some actual good movies.

Across the Valley you'll find theaters (including Arizona-based Harkins Theatres, a still-in-operation drive-in, and a few locations of Alamo Drafthouse) with a little something special to take in everything from booming summer blockbusters to moody art films.

Here are our 15 favorite movie theaters in the Valley.

The Valley’s first location of Alamo Drafthouse Cinema, the nine-screen theater in Chandler makes it so filmgoers can catch new movies and re-screenings, as well as special events while enjoying the full service, dine-in experience (i.e. beer and food brought to you). For before the show, the in-lobby bar features 32 craft beers on tap from 25 Arizona breweries, plus cocktails. As we’re sure you know, the concept originated in Austin, Texas, in 1997, and not much has changed – especially the "you talk, you text, you're gone" rule. Approaching the entrance for a behind-the-scenes tour at Alamo Drafthouse Cinema in Tempe.
Lynn Trimble

Opened spring 2018, the Alamo Drafthouse Cinema in Tempe is a mostly 18-and-over, dine-in movie theater showing first-run, independent, and rerelease films. The second Arizona Alamo location, this 32,300-square-foot theater has seven screens, over 750 reservable reclining or rocker seats, a full-service kitchen and bar, and outdoor patio dining area. Theater size range from 61 to 172 seats, with one theater equipped for 3-D films and one with a 35 mm projection for reel-to-reel films. Spot it in the Collective complex by the movie-themed Joe Pagac mural.

Arizona State University students might not like that student discounts aren’t offered this close to campus, but what they will like about AMC Centerpoint 11 is the fully reclining plush seats. You can practically lay down during the whole three-hour sequel you just signed up for. Set on Mill Avenue in downtown Tempe, this renovated theater used to be MADCAP Theaters – but is now the 11-auditorium AMC Theatres at Centerpoint, showing first-run movies and midnight premieres. Standard popcorn, nachos, and Coca-Cola freestyle machine drinks apply here, unless you check out the attached Pedal Haus Brewery. Just don’t forget to validate your Centerpoint parking garage ticket.

You’re in the Biltmore area, so you would expect nothing less than what you’ll find at AMC Dine-in Theatres Esplanade 14 – set just east of 24th Street and Camelback Road. This is the type of theater with luxury seats, plus a full menu with seat-side service. The sole AMC Dine-In Theatres location in Arizona, the Esplanade 14 offers the date-night appropriate Cinema Suites theaters – best before and after a visit to the on-site MacGuffins Bar & Lounge – or the more family-friendly Fork & Screen auditoriums. To cut it down a bit, AMC offers the AMC Stubs, plus reduced prices for student, military, and senior moviegoers at certain times.

The AMC Westgate 20 has an IMAX screen.
New Times Archive 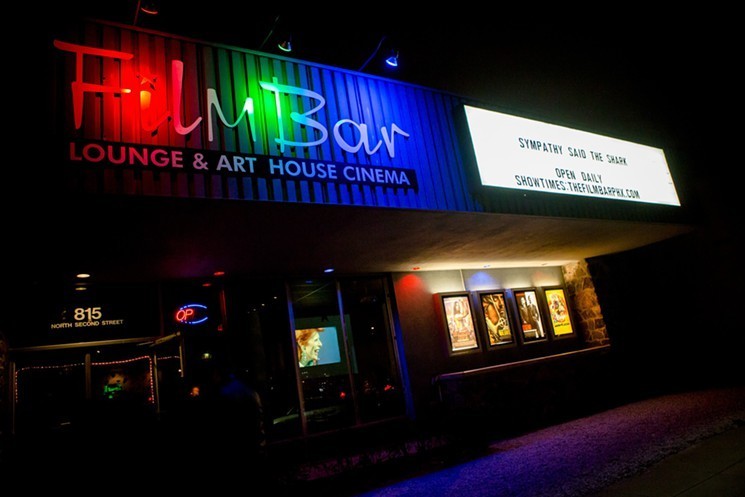 Billed as “Phoenix's true indie alternative,” FilmBar has been around since 2011, and in the past ei ghtyears has done some pretty innovative things. This downtown indie theater is at Second and McKinley streets, and features a soundproof, 76-seat microcinema with 2K digital projection technology. FilmBar is known for screening independent and foreign films, plus current, locally made, and cult films during special nights. The front of the house is a 21-and-over beer and wine bar, also offering tamales, nachos, popcorn, and candy. Stop by for a drink, and you don’t even need to see a movie to enjoy this part of FilmBar.

When news hit that the iconic Harkins Camelview 5 Theatres was closing in December 2015, many a Phoenician groaned. Where would we see our independent, foreign, artistic, and Oscar-worthy movies now? Harkins Theatres Fashion Square 7, nestled in the Scottsdale Fashion Square food court area, was also closed. But now the go-to mall is home to a perfect blend of both now-closed theaters: Harkins Camelview at Fashion Square 14, found on the second floor of the East Wing. The current Camelview features 14 wall-to-wall curved screens, those plush, reclining Harkins’ Ultimate Loungers in all auditoriums, and Fashion Square-worthy amenities like the Harkins’ Lobby Café and the Vérité Lounge. 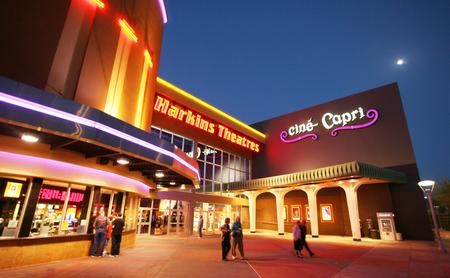 Billed as the “Ultimate Moviegoing Experience,” the Ciné Capri at Harkins Scottsdale 101 is a unique viewing experience for a couple of reasons. The Cine Capri screen is 30 feet tall and 80 feet wide, and backed by Dolby Atmos system pumping out 40,000 watts of digital sound to 600 stadium-style Ultimate Rocker loveseats. If you’ve seen a movie in the Cine Capri auditorium before, you know the people at Harkins might give a little spiel about the screen, and signature golden curtains will open dramatically right before the preview starts. And if the Loop 101 and Scottsdale Road is a little north for you, the Valley is home to a second Cine Capri screen at Harkins Tempe Marketplace 14. 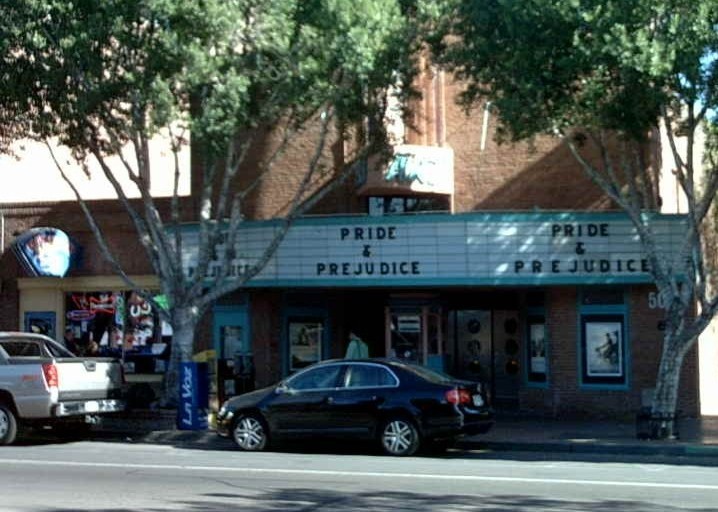 Pinned by that classic neon sign jutting above Arizona State University-adjacent nightlife, Harkins Theatres Valley Art is on the east side of Mill Avenue near Fifth Street. Open daily from 2 to 11 p.m., the historic Valley Art theater was built in 1940 as College Theatre, covers 4,600 square feet, and offers one screen for its schedule of art and indie films. Though this place looks like a classic movie theater from an old movie itself, don’t be fooled; the entire theater was renovated in 2001. Valley Art is equipped with Ultimate Rocker and stadium seating, digital sound, an expanded snack bar, and the ability to purchase tickets online.

Walking into the iPic Theaters at Scottsdale Quarter may be a little jarring if you’re just used to the noisy, arcade-filled, popcorn-dotted carpet lobbies of typical movie theaters. It’s swanky, more like a hotel foyer than anything else thanks to the decor and Salt Lounge. iPic has a full menu of appetizers, entrees, and cocktails, plus complimentary popcorn. The pleasantries continue straight into the eight auditoriums, where moviegoers find two tiers of plush seats. The lower level welcomes food and drink from the lobby onto the personal tray for each seat (preselected by you), while seats in the higher tier hold blankets and headphones, and offer food and beverage service during the film for a little extra. When the credits roll, you’ll remember you were also treated to complimentary valet parking. 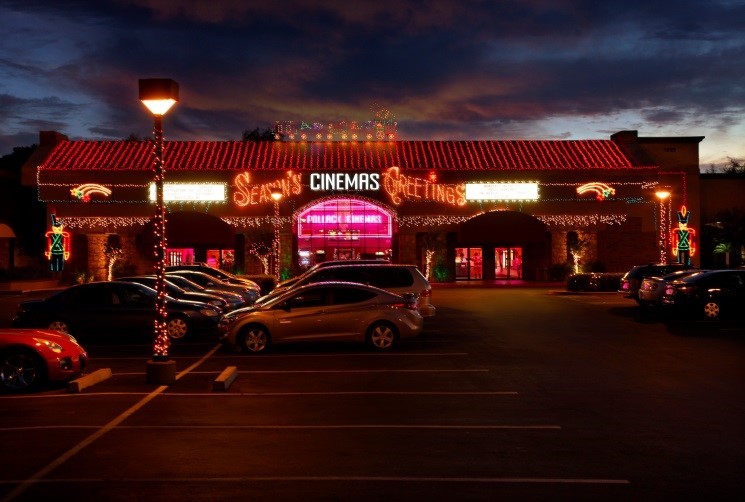 Found in the Royal Palm Plaza at Elliot Road and McClintock Drive in Tempe, Pollack Tempe Cinemas can almost be considered a tourist attraction. A discount theater around since 2000, Pollack Tempe Cinemas is mostly known for its elaborate, pink-neon-lit lobby, featuring a classic arcade room, signed movie memorabilia, giant movie posters, and life-size wax figures of some Hollywood icons. Pollack Tempe Cinemas offers six theaters (all refurbished in 2014) for digital and surround sound screenings. Wait a month or so for new films to hit PTC. Special Monday and Wednesday screenings will also include some throwback favorites like the Back to the Future or Harry Potter series.

This is another “eat and drink while you watch the movie” theater experience. RoadHouse Cinemas is a locally owned and operated movie house showing first-run films in spacious auditoriums – meaning they leave plenty of room for your server to bring over orders like the Cool Hand Luke salad, the Moonstruck pizzetta, Glazed & Confused popcorn, and the Robert Brownie Jr. Sundae. There’s also wine and Arizona craft beers going around during the state-of-the-art digital projection and 7.1 Dolby Digital surround sound. The lobby is also pretty cool, so be sure to take a look around before the show. 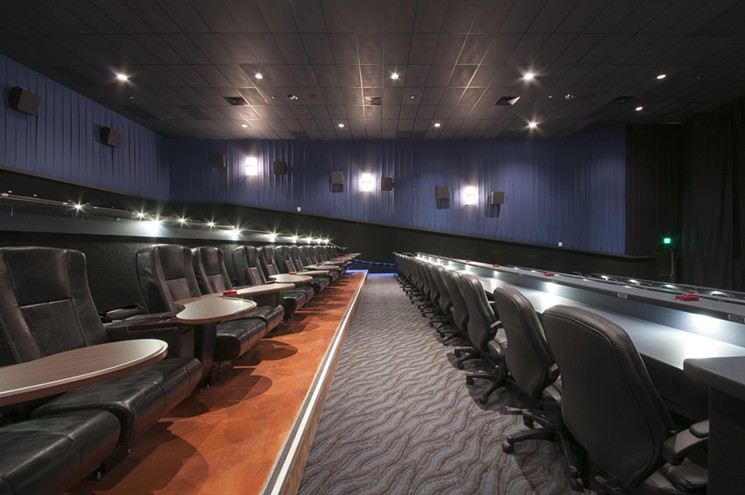 
This dine-in theater has been around since 2011. Studio Movie Grill has nine theaters with state-of-the-art digital projection and sound, plus a full-service bar and lounge. SMG Scottsdale screen first-run movies, and hosts special events like the SMG's Classic Film Series (think Halloween, Lord of the Rings, E.T.) and the Real Life Women Superheroes (honoring influential women from across the country, including Mary Hadsell, director of the Camelot nonprofit in Scottsdale). So in summation: a movie theater with purpose, new films, cocktails, and blackened chicken sliders. 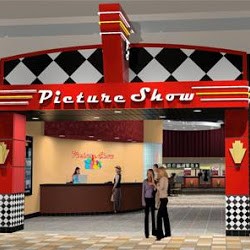 North Phoenix's Picture Show is a first-run movie theater located across from the food court at Paradise Valley Mall. The space was remodeled in 2012 to include new seating and surroundings, while all eight theaters offer digital surround sound and projection with 3-D capability that’ll cost you an extra $2.50. The Paradise Valley Mall movie is set apart thanks to its ample stadium seating – meaning you’re probably not going to be sharing an armrest with a stranger. Special pricing applies for senior, military, and student moviegoers. Concessions are pretty reasonable over here, too, including $1 hot dog and popcorn combos.

Tucked away at 55th Avenue between Missouri Avenue and Bethany Home Road, the Glendale 9 Drive-In is the sole Arizona location operated by West Wind – one of the largest drive-in theater chains. Glendale 9 screens first-run movies, and still keeps up with midnight showings and special premieres. Movies are shown by digital projection, and sound is piped in by a digital signal sent straight to car stereos or portable FM players. There’s also a snack bar in the hut toward the middle of the outdoor theater. This west Valley drive-in can show up to 18 different films, and runs double features each night.

Editor's note: This post has been updated since it was originally published in July 2016.
KEEP PHOENIX NEW TIMES FREE... Since we started Phoenix New Times, it has been defined as the free, independent voice of Phoenix, and we'd like to keep it that way. With local media under siege, it's more important than ever for us to rally support behind funding our local journalism. You can help by participating in our "I Support" program, allowing us to keep offering readers access to our incisive coverage of local news, food and culture with no paywalls.
Make a one-time donation today for as little as $1.