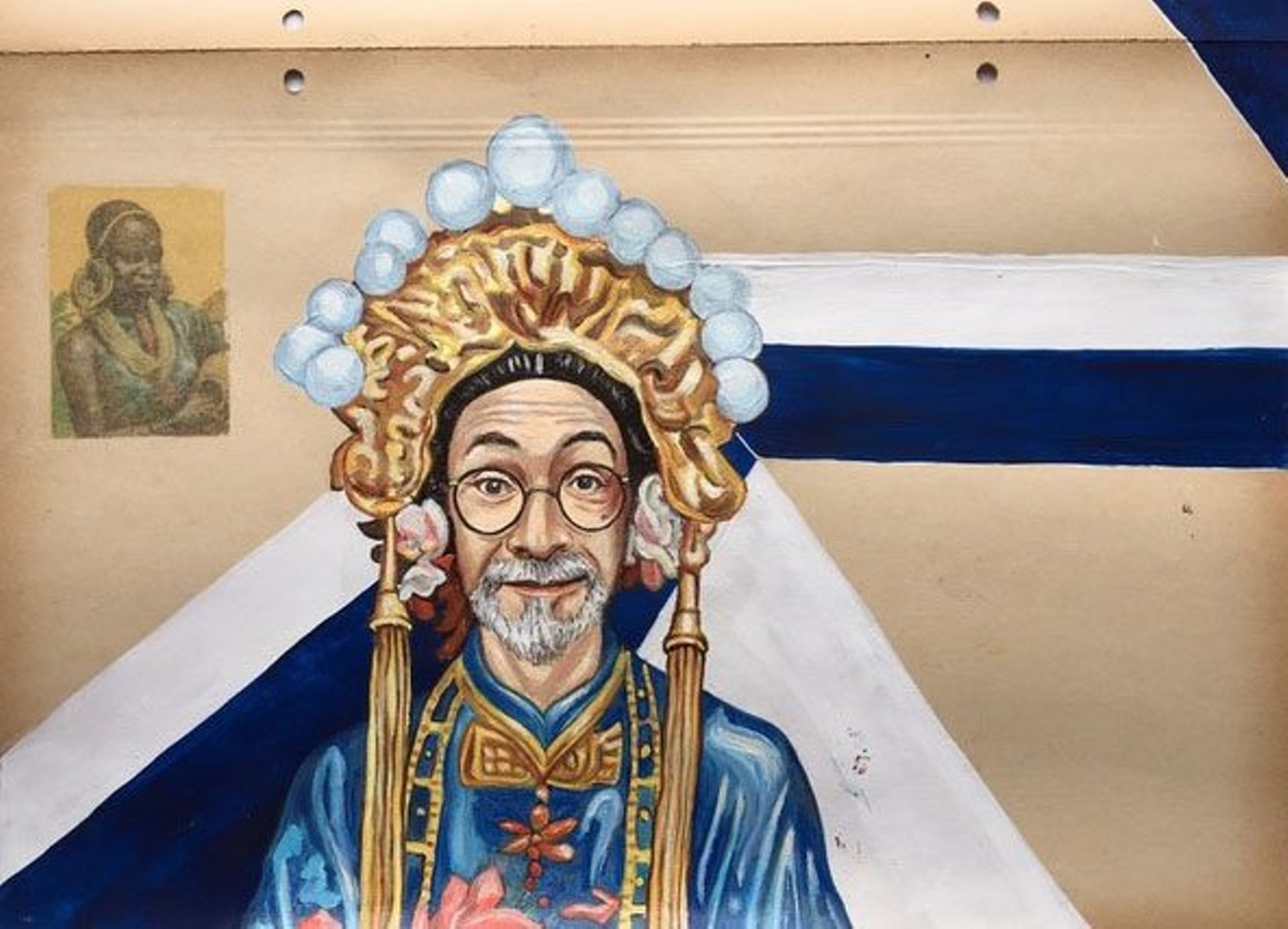 Enrique Chagoya's Mindful Alien’s Guide to Reverse Anthropology (detail), acrylic and water based oil paint on de-acidified vintage paper, 11.25” x 93”, unique. Courtesy of Lisa Sette Gallery
Hey, Phoenix. We planned your week. And it's going to be a busy one, between the St. Patrick's Day parade, the final days of a Childsplay Theatre classic, and a sporting event or two. Need more? Take a gander at our curated calendar.

Cubs vs. Angels
Now that America’s most lovable losers, the Chicago Cubs, are bona fide winners, having shaken a 108-year-old monkey off their backs last season, they face a new question: What will they do for an encore? Make up for lost time, of course.

Barring any major injuries, the Cubs enter 2017 as formidable as they were last year, with a championship pedigree to boot. The team’s core is young, and many of their stars are under contract for years to come. So if you want to see the best baseball team on earth take the field before they migrate back to Chicago, consider stopping by Tempe Diablo Stadium, 2200 West Alameda Drive, on Monday, March 6, when the Anaheim Angels host the defending champs starting at 1:05 p.m. Tickets are $25 and up. Visit the Cactus League website or call 480-350-5265 for details. Rob Kroehler Trash gets a new look.
Rebecca Blume Rothman
"Reimagined Trash"
If you found the Derelicte fashion line featured in Zoolander not only funny but kind of an interesting idea (we’re not excusing John Galliano), attend the “Reimagined Trash” Celebration and Reception.

Artists are tasked with “forging new ideas, objects, and purposes from old expectations, methods, and materials.” The repurposed work of resident artists Ann Morton and Christine Lee will be showcased from 5 to 8 p.m. on Monday, March 6. See artwork in the Gallery @ City Hall, 200 Washington Street, from 5 to 6 p.m., followed by large-scale installations and light refreshments at the Arizona Science Center, 600 East Washington Street. The Friends of Phoenix Public Art will provide trolley transport between showings.
Each event is free to attend. See Facebook for details. Lauren Cusimano Mark Pomilio surely decided he needed to “Go big or go home” with this abstract artwork.
Lynn Trimble
"Abstraction in the Singular: Part I"
If you’re ready to exercise your brain, get to Bentley Gallery, 215 East Grant Street. That’s where Grant Vetter has curated an exhibition called “Abstraction in the Singular: Part I.” It’s a survey of works by Arizona and West Coast artists that hints at the intriguing variations within contemporary abstract art. Never fear if you’re an art novice. You don’t need an art degree to appreciate these works.

Several featured artists are well-known on the local gallery scene, including Bill Dambrova, Rachel Goodwin, Mark Pomilio, and Travis Rice, to name a few. Whatever your stereotypes about abstract art, their work likely will challenge them. “GOVT 101: How to Make a Downtown — Density, Arts, GPLETs, and More” is a gathering of city officials, business types, and political operatives who are ready to hear and discuss questions like, “What is the best way to foster the growth of downtown Phoenix?” and “Why is density so important?” The panel features Downtown Phoenix Partnership executive director Dan Klocke, Michael Levine of Levine Machine, Jeff Sherman from Downtown Voices Coalition, and more.

Don't miss this hilarious love letter to the stage.
Courtesy of Phoenix Theatre
Bullets Over Broadway
Filmmaker Woody Allen told reporters that he initially opposed transforming Bullets Over Broadway, the 1994 Academy Award-nominated backstage screwball comedy Allen co-wrote with Douglas McGrath, into a musical. The director changed his mind when he paired the story of a young playwright getting his first play on the Great White Way financed by a wealthy mobster with the jazz standards of the 1920s. Phoenix Theatre actors Toby Yatso and Sally Jo Bannow keep the high jinks ensuing as Michael Barnard directs this hilarious love letter to the stage.

What's it like to work in fashion? Hear all about it at PAM.
University of the Fraser Valley/Flickr Creative Commons
Phoenix Fashion Industry
What’s it really like to have a career in fashion? A trio of heavy hitters will let you in on their experiences during Phoenix Fashion Industry, an 11:30 a.m. luncheon presented by Arizona Costume Institute at Phoenix Art Museum, 1625 North Central Avenue, on Wednesday, March 8.

Arizona-born model Kelly Mittendorf, best known for her work with Prada, will sit down with public relations pro Margaret Merritt and Agency Arizona director Terri Camberlango at 12:30 p.m. to discuss their journeys in the fashion industry. The luncheon is $30 for Costume Institute members and $33 for nonmembers. The lecture, sans lunch, is free with museum admission, which is $18 for adults. For details, see Phoenix Art Museum's website or call 602-257-2138. Becky Bartkowski

Anwar Newton hosts TWST!
Gabriel King Radley
This Week Sucks Tonight!
By Thursday, we’re ready to drop the façade. No more smiling, no more pretending all’s well, no more falling asleep sober at a decent hour. Come what may on Friday, it’s time to cut loose and make mischief.
Or at least watch other people make it, as they might at the new late-night comedy event This Week Sucks Tonight! in the lounge of Crescent Ballroom, 308 North Second Avenue. Host Anwar Newton is also known for Valley Bar’s Literally the Worst Show Ever, which has, despite the finality suggested by its name, recurred for several months.

www.crescentphx.comTWST is “a roundup show,” according to Newton. “The goings-on of entertainment, politics, music, my week — personally ridiculous and also sucky things.” (And apparently, per our notes, “slocila,” always a crowd-pleaser.) Bring your 21-or-over self to the free show on Thursday, March 9, at 11 p.m. Call 602-716-2222 or visit Crescent Ballroom's website. Tip your server. Julie Peterson

V.E. Schwab
Before heading down to Tuscon for the Annual Festival of Books, best-selling fantasy author V.E. Schwab returns to the Valley to sign copies of her latest, A Conjuring of Light. She visits Changing Hands, 300 West Camelback Road, at 7 p.m. on Thursday, March 9.

The finale of her “Shades of Magic” trilogy, A Conjuring of Light picks up in the immediate aftermath of last year’s A Gathering of Shadows. It features universe-hopping magician Kell through parallel Londons as he confronts evil bent on draining the magic from each London. Joining Kell is the cross-dressing pirate queen Lila, who is coming into her own magical powers — threatening Kell’s place as the last Traveler between worlds.

Hardcover copies of A Conjuring of Light are available now for $25.99. The price includes admission for two to her talk and signing. Call 602-274-0067 or visit the Changing Hands website for more information. Michael Senft

What a difference seven seasons can make. When the Suns and Lakers face off on Thursday, March 9, at Talking Stick Resort Arena, 201 East Jefferson Street, both teams will battle to avoid the dubious distinction of being the worst in the West. Aside from a few mid-level veterans, both teams are in the throes of a youth movement, and with nothing but their pride on the line, expect both teams to throw down for this nationally televised game, starting at 8:30 pm. Tickets are $20 and up. Visit the Suns' website or call 602-379-7800 for details. Rob Kroehler