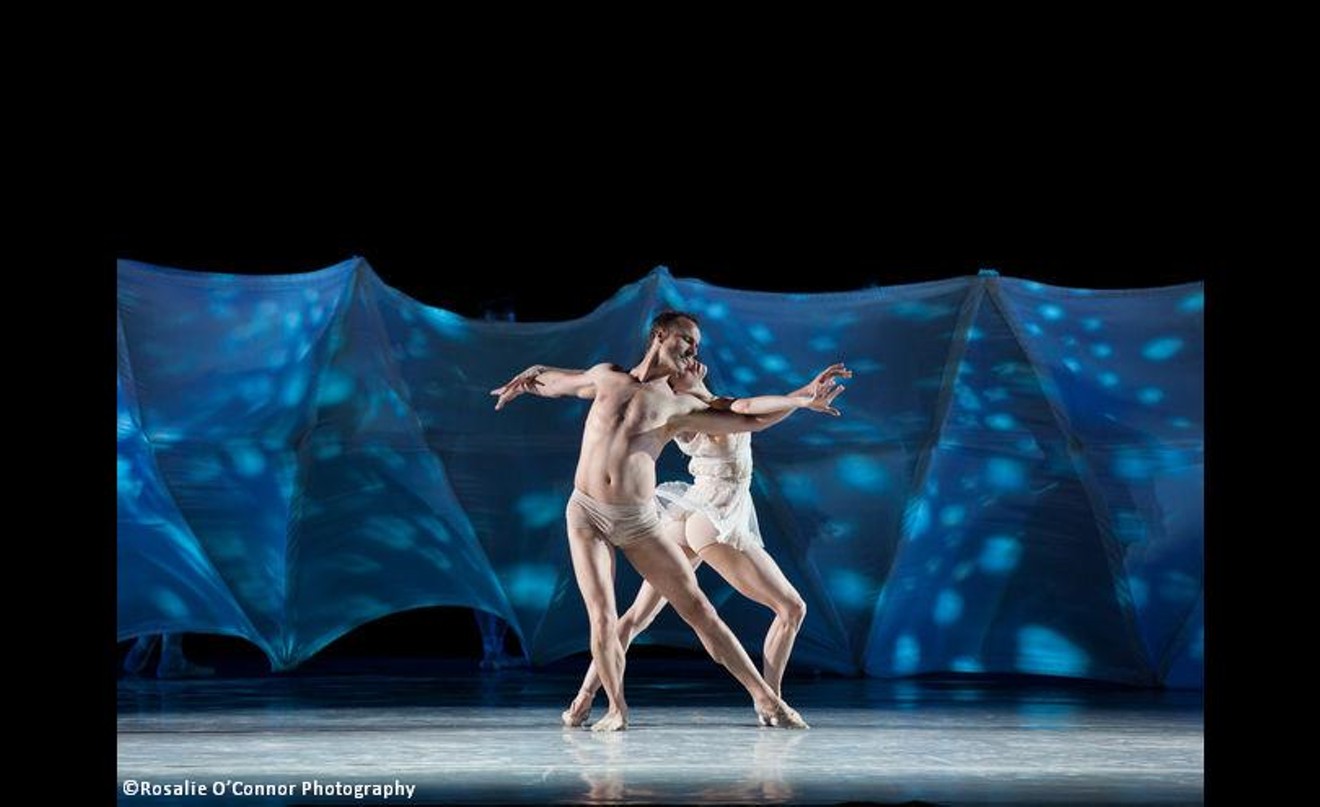 Previous Ballet Arizona Topia performance at Desert Botanical Garden. Rosalie O'Connor
Some say the third time's a charm. But that's not quite true for Ballet Arizona's Topia, which opened its third run at Desert Botanical Garden on Tuesday, May 23. The site-specific work, choreographed by Ib Andersen, still shines. But the company itself could use a bit more polish.

Andersen created Topia for Ballet Arizona, where he's been the artistic director since 2000. It premiered at the Garden in 2012 and returned the following year. Each time, it was a crowd-pleaser.

Last year, Andersen premiered another site-specific work called Round. Also performed at Desert Botanical Garden, the new piece took a theater-in-the-round approach. But surrounding a square stage with audience members meant sight lines included not only the dancers, but also a sea of white chairs and onlookers seated there.

Round was strangely detached from the desert that surrounded it. Billed as a ballet that embodies “themes that explore man’s connection to nature,” it never gave nature the spotlight it deserves.

So Topia's ongoing popularity is completely understandable, for several reasons.

Topia is performed atop an 80-foot-long stage plopped smack down in a desert expanse, where the Papago Buttes serve as a backdrop. Native plants, like saguaro and yucca, are bathed in vibrant hues from violet to burnt orange during the performance. And dancers don subdued, ecru-color costumes that accentuate the aesthetic of the human form without distracting from the natural beauty that surrounds it.

There's also the choreography, which seamlessly blends elements of classical and contemporary ballet. Topia opens as three pairs of male dancers enter the stage in sequence, their measured movements conveying reverence for the majestic desert backdrop.

But minutes later, after more dancers stream onto the stage, the gracefully outstretched arms and lyrical turns are replaced by less conventional fare. Chests facing skyward, several dancers, with hands and feet supporting their torsos that parallel the stage like tabletops, make their feet playfully patter.

By the end of the evening, a couple of dancers have body surfed, rock concert-style, atop the skyward reaching palms of fellow dancers. Others have been tossed midair between one small group of dancers and another.

Previous Ballet Arizona Topia performance at Desert Botanical Garden.
Rosalie O'Connor
At one point, a pair of dancers turn their backs to the audience. They stand perfectly still, side by side, at the back of the stage as if paying homage to a towering saguaro that anchors all the land that surrounds it.

Even so, this year's Topia doesn't quite live up to expectations.

The precision typically shown by Ballet Arizona dancers just isn't there this time around. When performing the same movement, something that should be executed uniformly, dancers show obvious differences in basics — like how high to kick a leg or the degree to which an arm is curved.

The problem wasn't limited to just one or two dancers on opening night. Instead, it pervaded the entire performance.

It's understandable, perhaps, when you consider that three-fourths of current company members joined Ballet Arizona during or after 2014. That means they've never performed this piece before. Judging from opening night of this year's Topia, they've yet to really gel into one cohesive unit.

It's not that their technique suffered. Instead, their characteristic charisma wasn't there. And frankly, that sapped some of the show's energy on opening night.

Simply put, these dancers could use more passion and finesse.

But that doesn't mean you should skip this ballet. Because despite some minor flaws, Topia is still a delight.

Ballet Arizona's Topia continues at Desert Botanical Garden through June 10. Tickets are $36 to $80.