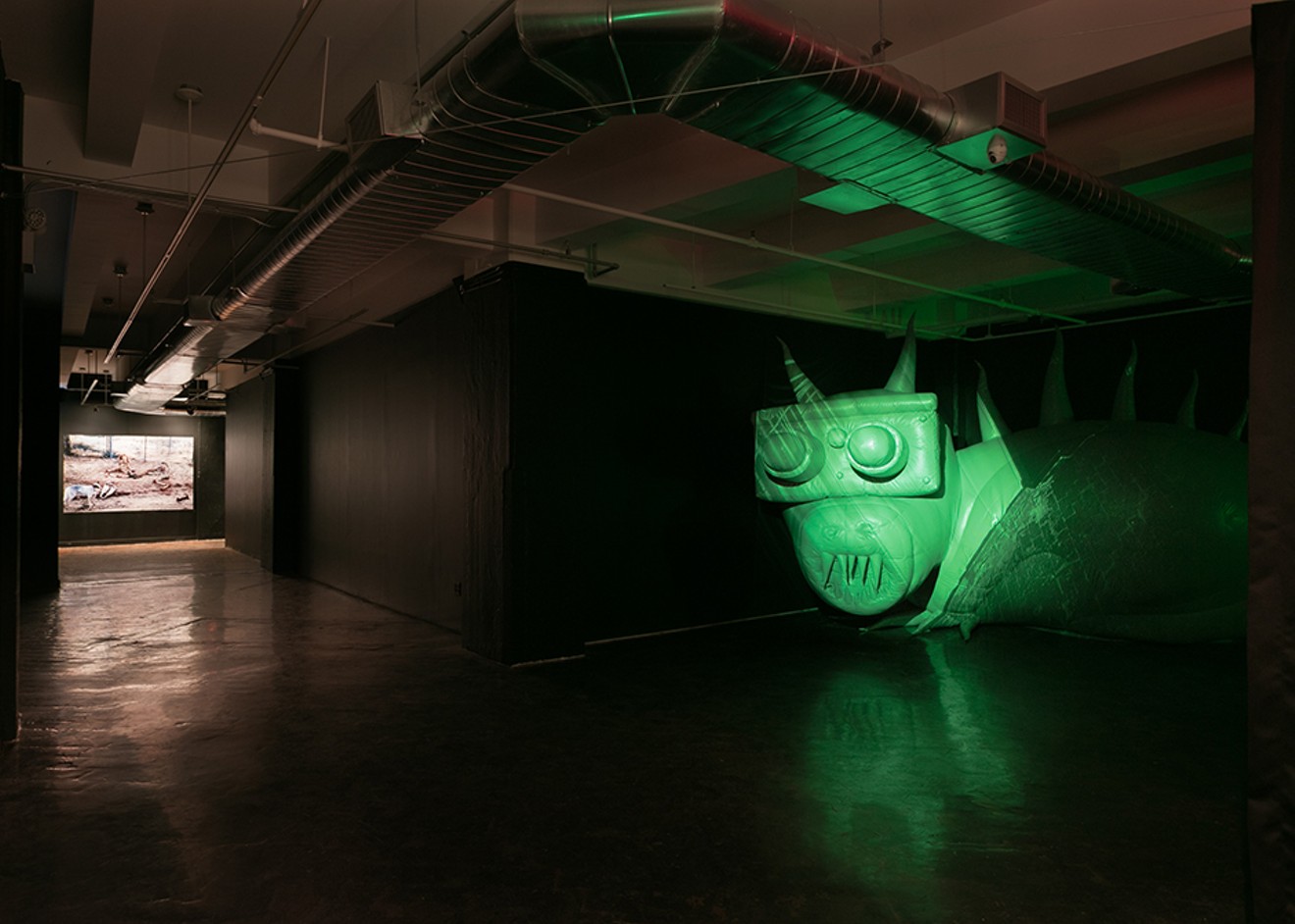 Postcommodity, Coyotaje, 2017. Postcommodity/Courtesy of Bockley Gallery
As debates continue about immigration-related issues such as building a border wall, justice for young dreamers, and the impact of Trump’s zero-tolerance policy on families, several artists with Arizona connections are contributing to the wider discussion of immigrant rights through their work.

Here’s a look at 10 artists whose recent or current work touches on immigration or the U.S.-Mexico border. 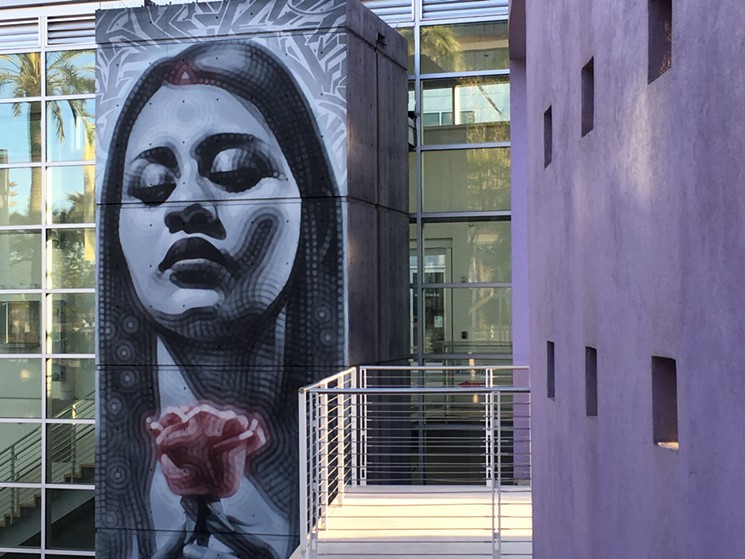 El Mac, Desert Rose (Nuevas Generacioners), 2016, Aerosol. Commissioned by Mesa Contemporary Arts Museum.
Lynn Trimble
El Mac
That beautiful mural you see off a Mesa Arts Center courtyard features the image of Karen Bracamonte, an immigrant from Guatemala married to one of the artist’s closest friends. El Mac was born in Los Angeles, where he lives today, but grew up in Phoenix, where friends know him as Miles “Mac” MacGregor. The aerosol artwork painted in 2016 was commissioned by Mesa Contemporary Arts Museum. It features Bracamonte, then seven months pregnant, holding a single red rose. El Mac collaborated with Mesa artist Mando Rascón on the designs at the top of the mural, which he titled Desert Rose (Nuevas Generacioners). And he wrote these words about the mural on his website: “I was honored to paint for this museum something that can hopefully be seen as beautiful and affirming of love, life, and diversity.” 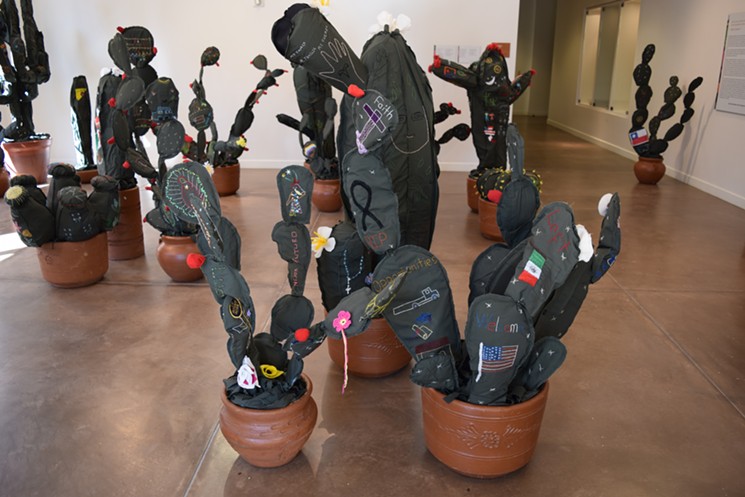 Margarita Cabrera. Space in Between (detail). Exhibited at Desert Botanical Garden.
Lynn Trimble
Margarita Cabrera
During a September 2015 artist residency with ASU Art Museum, Margarita Cabrera worked with community members to create soft sculptures with an immigration-related twist. About 30 people, including many immigrants, worked with Cabrera to create saguaro cactus sculptures made of Border Patrol agent uniforms. Every cactus was also decorated with words or images taken from stories of actual immigrant experiences. ASU Art Museum collaborated with the Desert Botanical Garden, which showed the works in an exhibition titled “Margarita Cabrera: Space In Between.” Cabrera has since joined the faculty at ASU School of Art, and her work is part of the ASU Art Museum collection. 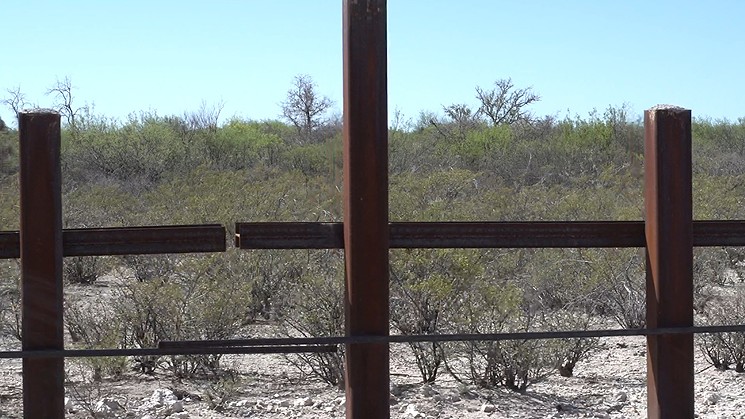 Postcommodity, A Very Long Line, 2016. Video still.
Courtesy of Postcommodity and Bockley Gallery
Postcommodity
When the artist collective Postcommodity manifested their cross-border land art installation called Repellent Fence in October 2015, collective members were based in Arizona and New Mexico. The installation, created using large-scale balloons, prompted reflection on why so many people attempt to create artificial barriers between cultures and landscapes. It’s the subject of a 2017 documentary called Through a Repellent Fence: A Land Art Film, which premiered at Scottsdale Museum of Contemporary Art, and is currently available online. Postcommodity artists Raven Chacon, Cristóbal Martínez, and Kade L. Twist created a four-channel video with sound titled A Very Long Line, which was part of the 2017 Whitney Biennial in New York City. Other immigration-related works include Coyotaje, a 2017 installation for Art in General in Brooklyn, which addressed the ways border patrol agents “weaponize indigenous knowledge.” 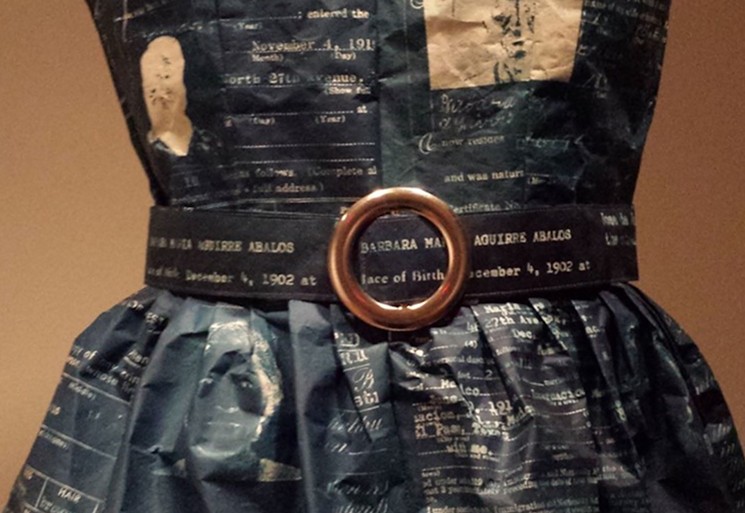 Detail of Annie Lopez work previously exhibited at Phoenix Art Museum.
Lynn Trimble
Annie Lopez
Artist Lopez has been active in the Phoenix art scene since 1982, when she helped to start a collective called Movimento Artistico del Rio Salado (MARS) for Chicano artists. It’s since disbanded, but Lopez is one of many MARS artists continuing to address immigration-related issues. For Lopez, it takes the form of dresses created using cyanotype photographs on tamale paper. Often, Lopez's cyanotype images reference her family’s own immigrant history, or social justice issues surrounding immigration. Recently, her work was featured in “Walk in My Shoes” at The Gallery at Tempe Center for the Arts, and "True Blue" at Walter Art Gallery. In 2012, Lopez received a prestigious artist award from Phoenix Art Museum’s Contemporary Forum support organization, and her work was exhibited at the museum in 2013. Look for Lopez's work when Phoenix Art Museum opens its new "In the Company of Women" exhibition in early July. 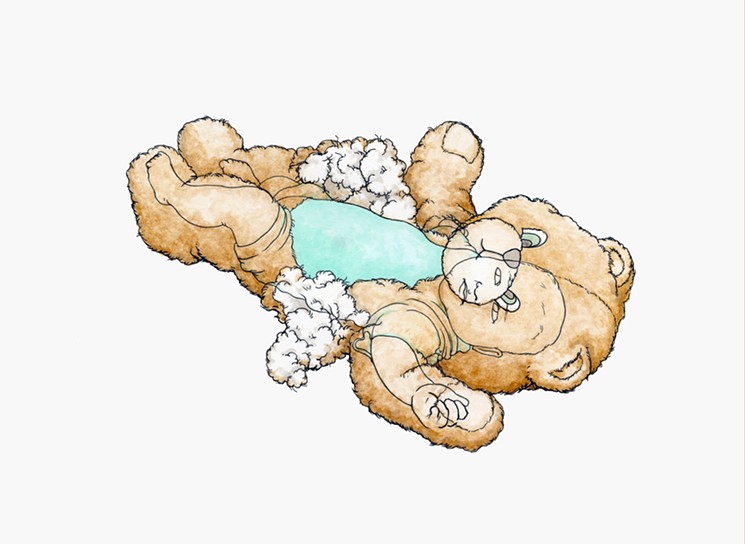 Julio Cesar Morales, Undocumented Intervention #22, 2007-18, Watercolor and ink on paper.
Courtesy of artist and Gallery Wendi Norris
Julio César Morales
As curator for ASU Art Museum, Morales often presents works exploring immigration and border-related issues. But he’s also an artist specializing in “social-based abstracted artwork that uses whatever medium necessary." He’s represented by Wendi Norris Gallery in California. Morales’ watercolor paintings of people being smuggled in desperate yet creative ways across the Mexico-United States border have been shown at Palabra in downtown Phoenix and The Gallery at Tempe Center for the Arts. Morales' bright pink neon work featuring the word “Invaders” was part of the controversial “This Machine Kills ________” exhibit that opened in late 2016 at Fine Art Complex 1101 in Tempe. Morales received the 2018 Contemporary Forum artist award at Phoenix Art Museum in May, which means he’ll have an exhibition at the museum in 2019.

Ana Teresa Fernández
While others talk of building walls, artist Ana Teresa Fernandez works to erase them. She’s done several installations along the U.S.-Mexico border, combining visual and performance art that often includes painting metal slats of existing border fencing the color of the sky, so they seem to disappear within the landscape. She’s based in San Francisco, but created an installation called Oasis in 2016 at the Rio Salado Habitat Restoration Area in south Phoenix. It was presented by Project in the Borderlands, in conjunction with ASU Art Museum and CALA Alliance, a nonprofit that fosters cultural understanding in the Americas through shared arts experiences. Her border-related work was also part of the museum’s “Energy Charge: Connecting to Ana Mendieta” exhibit in 2016. 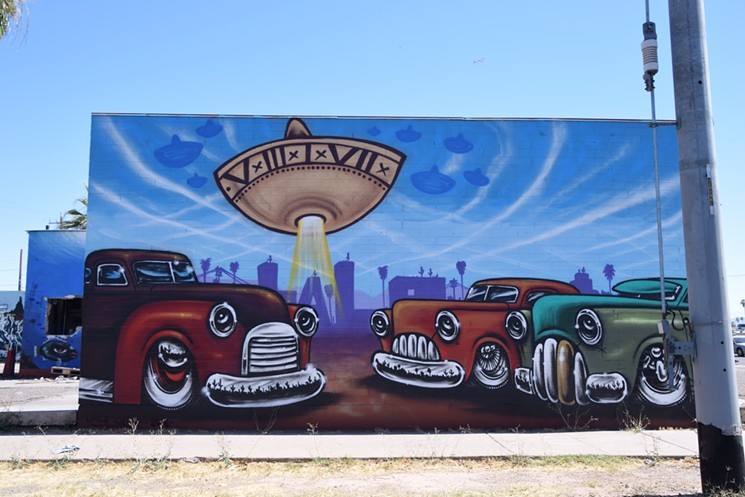 Mural by Lalo Cota that was located on a building demolished in 2017.
Lynn Trimble
Lalo Cota
One of Phoenix’s best-known and prolific muralists, Lalo Cota was born in Navojoa, Sonora, Mexico. He’s one of several artists who collaborated with the Tucson-based Colibri Center for Human Rights on a 2015 mural raising awareness of migrant deaths in the desert borderlands. But he’s also painted several works that reference the “illegal alien” language of former Maricopa County sheriff and Trump pal Joe Arpaio. Those works feature surrealist images of sombreros stylized to look like flying saucers hovering over desert skies. One of Cota's best-loved murals painted many years ago on a car wash in Roosevelt Row, has since been demolished to make way for a new Starbucks. But fans can see more of Cota’s work inside the Roosevelt Row gallery and studio space he opened in early 2018. 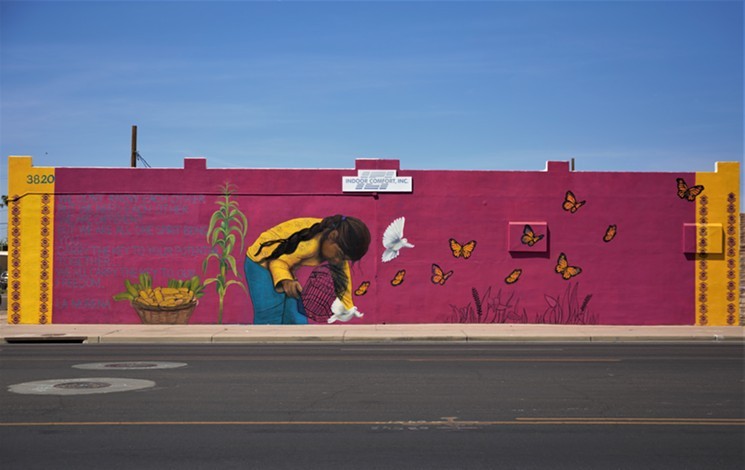 Unlocking Your Potential and Freedom mural by Lucinda Hinojos.
Melina Zuniga
Lucinda Hinojos
Lucinda Hinojos, who uses the artist moniker La Morena, was one of the group of artists to collaborate on the mural created on Grand Avenue in 2015, on the La Melgosa building housing several small businesses. The mural was organized by the Colibri Center for Human Rights in Tucson, which works to prevent migrant deaths in the borderlands. More recently, she painted a mural titled Unlocking Your Potential and Freedom, in collaboration with a local art teacher and several elementary school students. Located on the east wall of Bloom’s Flower & Gift Shop in South Phoenix, the mural 2018 is meant to highlight the fight for social justice for young immigrants called “dreamers,” whose immigration status is threatened by Trump’s approach to the Deferred Action for Childhood Arrivals policy (also called DACA). The mural depicts a field worker releasing butterflies, a creature commonly used to symbolize migration, from a cage. 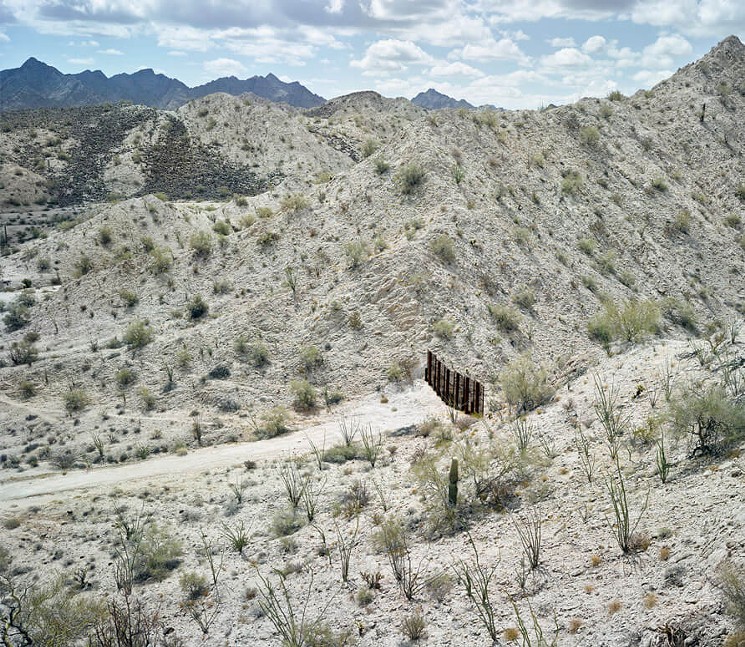 Detail of Labor by M. Jenea Sanchez and Gabriela Muñoz.
Lynn Trimble
M. Jenea Sanchez
Born and raised in Douglas, Arizona, M. Jenea Sanchez has centered her art practice around border communities including Douglas and Agua Prieta, located in the Mexican state of Sonora. She’s part of Border Arts Corridor, which explores borderland complexities by engaging people in trans-border arts and cultural experiences. For a group exhibition called “Push Comes to Shove,” which opened at Scottsdale Museum of Contemporary Art in October 2016, she collaborated with Phoenix-based Gabriela Muñoz on a piece called Labor. The work comprised a short wall of bricks made with Mexican soil and serigraph images of women artists in a collective located near the U.S./Mexico border. It’s one of several collaborative projects she’s undertaken related to border life or immigrant experiences.
KEEP PHOENIX NEW TIMES FREE... Since we started Phoenix New Times, it has been defined as the free, independent voice of Phoenix, and we'd like to keep it that way. With local media under siege, it's more important than ever for us to rally support behind funding our local journalism. You can help by participating in our "I Support" program, allowing us to keep offering readers access to our incisive coverage of local news, food and culture with no paywalls.
Make a one-time donation today for as little as $1.