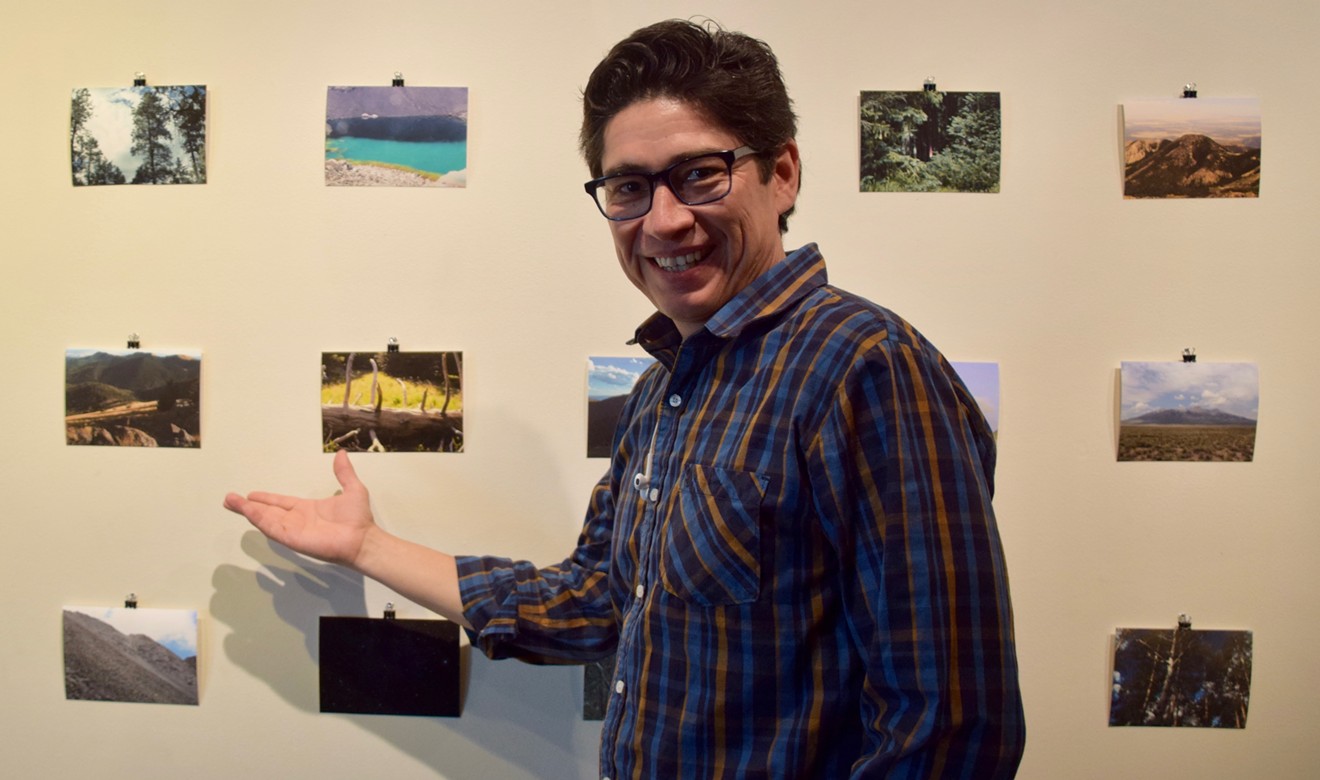 It’s a four-channel video and sound installation meant to inspire greater connection between people and landforms, and it continues through Sunday, March 12.

Yazzie started by hiking and exploring regions where sacred mountains comprise geographic borders and cultural signifiers for the Navajo/Diné people.

“Each mountain carries with it: forms of symbolic and sacred power, protection, stories, female or male identities, and a color,” Yazzie shares in his artist statement for the show. Along the way, Yazzie documented his journey through videos, photographs, and audio recordings.

Installation view of Steve Yazzie's "Black White Blue Yellow" exhibition at the Heard Museum.
Steve Yazzie
"Most of the exhibition is brand-new, but some of the elements were drawn from earlier works," Yazzie says.

He’s manipulated some of the recordings and photographs, and left others as is. It’s a way of adding magical elements, Yazzie says. And it’s meant to leave people wondering about which parts of what they’re seeing might be real, and which manufactured. It’s an important question not only inside the gallery, but within culture at large, Yazzie says.

In addition to videos – one on each of four screens facing north, south, east, and west – he’s installed a wall filled with 40 still shots of his mountain excursions. Many capture natural elements encountered along the way. But gallery-goers who linger will also see visual artifacts, from fireworks to tiny bubble-like spheres, Yazzie created and superimposed into the actual mountain scenes he encountered.

"The photographs are really fragments of my life," he says.

Installation view of Steve Yazzie's "Black White Blue Yellow" exhibition at the Heard Museum.
Steve Yazzie
Yazzie used yellow lighting to infuse the space with a warm glow. It’s most evident over large-scale polished rocks repurposed from earlier Heard Museum exhibitions. They’re big enough that viewers can use them as seating, soaking up the light as they survey shifting images on the four screens at the heart of the installation.

Installation view of Steve Yazzie's "Black White Blue Yellow" exhibition at the Heard Museum.
Steve Yazzie
Yazzie has long incorporated walking into his work, after discovering the joys of hiking as a child. In 2014, he co-founded the Museum of Walking with multidisciplinary artist Angela Ellsworth. Currently housed on ASU’s Tempe campus, the Museum of Walking promotes walking as an art practice. And it will be presenting an activity at the Heard Museum during First Friday’s opening reception for Yazzie’s show.

Yazzie’s previous work with the Heard Museum includes Fear of a Red Planet, a multi-panel mural he painted over the course of six months in 2000, which was removed last year as the museum undertook renovations to transform two smaller gallery spaces into one larger space. The public reveal of those changes, funded by the Virginia G. Piper Foundation, happens on February 10.

The mural, which was part of a National Endowment for the Arts initiative, features scenes of Navajo, Yaqui, and Colorado River people being displaced or assimilated during the boarding school period. Currently it’s on view just above the “Black White Blue Yellow” exhibition, on the second story of the Jacobson Gallery.

Fear of a Red Planet panels on view at the Heard Museum.
Lynn Trimble
So those who head to the Heard Museum can see not only Yazzie’s most recent work, but also work created more than a decade ago – with a vastly different focus and medium. "I painted for 20 years, but being in a studio is restrictive," Yazzie says of making the shift to work that's tied more directly to the land.

The recent work is all about connection, he says. "It's really a spiritual journey of trying to reconnect with sacred places."

The “Black White Blue Yellow” exhibition, which runs from February 3 to March 12 at the Heard Museum, is free with museum admission ($18/adults or free after 6 p.m. on First Friday).