And it had nothing to do with the phenomenal performance his band laid down at Crescent Ballroom a few nights ago.

Capone was reportedly arrested by the Phoenix Police Department on Tuesday, September 12, a few hours prior to Quicksand’s packed show at the popular downtown music venue. 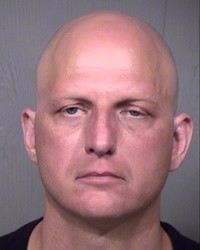 Tom Capone's mug shot.
MCSO
According to police reports, the 47-year-old guitarist is accused of shoplifting more than three dozen items from the CVS pharmacy located within CityScape at First Avenue and Jefferson Street.

Capone was reportedly seen on security cameras by employees stuffing a total of 43 items in both his backpack and pockets before leaving the store without paying.

An off-duty officer at CityScape was quickly notified of the alleged theft and reportedly attempted to stop and question Capone.

And then things got physical.

Capone attempted to walk away, but the cop ended up nabbing him, resulting in the musician being tackled and handcuffed.

As a result, Capone was charged with one count of shoplifting and one count of resisting arrest. (Each is a misdemeanor.)

He wound up spending the night in Fourth Avenue Jail and was released on his own recognizance the following morning.

Meanwhile, the other three members of Quicksand performed as planned for a packed house at Crescent Ballroom on Tuesday. And according to one of those in attendance, the band “brought it.”

Capone is scheduled to appear in court on the matter on September 27. Barring a continuance, we’re guessing that he might wind up missing Quicksand’s scheduled performance that night in Chicago as well.