Backpage.com 'Censors' Itself on Eve of U.S. Senate Subcommittee Testimony 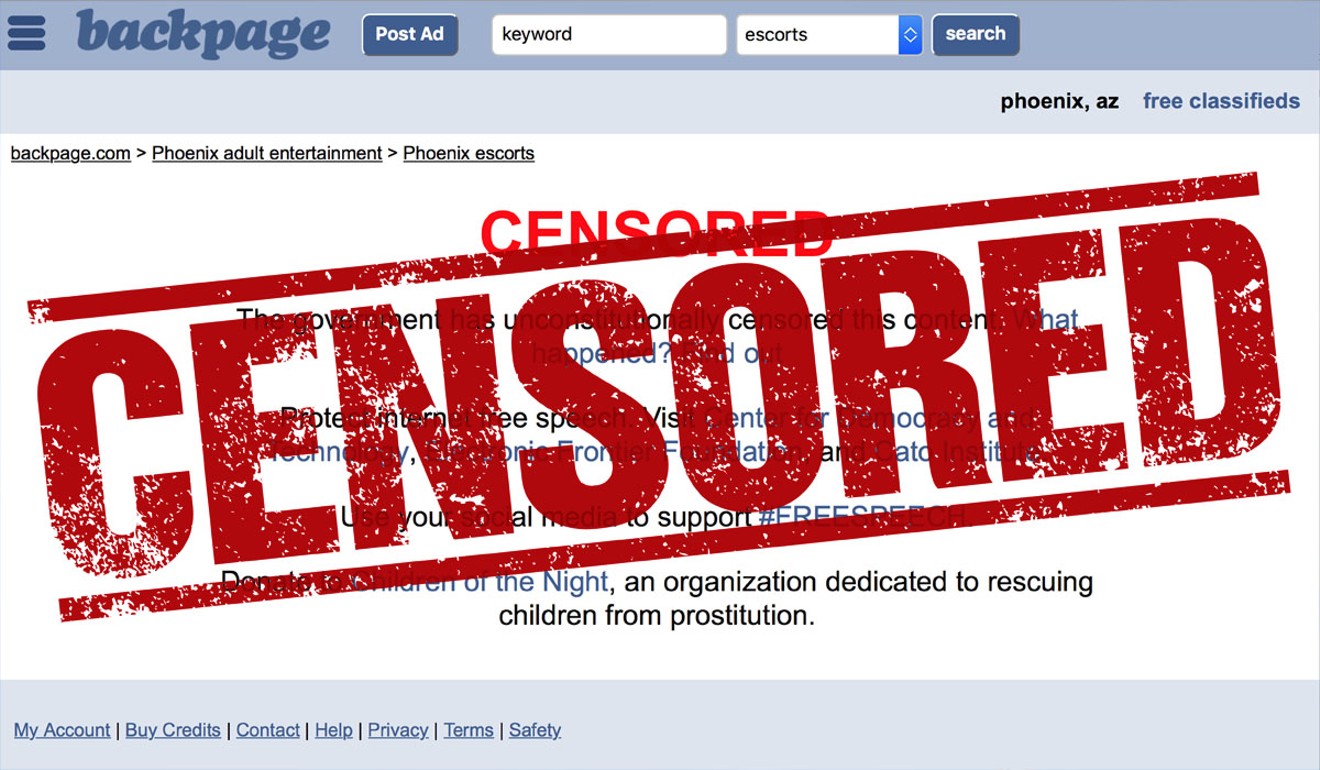 In a bombshell development on the eve of a January 10 hearing convened by the U.S. Senate's Permanent Subcommittee on Investigations that was to include testimony from the creators of Backpage.com, the online classifieds giant has shuttered its controversial adult listings section.

"The government has unconstitutionally censored this content," every "Adult" page on the site now reads, followed by a hyperlink to Backpage's "Media Resources" page, which is topped by a January 9 press release: "What happened? Find out."

"Use your social media to support #FREESPEECH."

"Donate to Children of the Night, an organization dedicated to rescuing children from prostitution."

In its press release, Backpage vows to fight on, asserting that it has been backed into a corner by the heavy hand of the government:

"As the direct result of unconstitutional government censorship, Backpage.com has removed its Adult content section from the highly popular classified website, effective immediately. For years, the legal system protecting freedom of speech prevailed, but new government tactics, including pressuring credit card companies to cease doing business with Backpage, have left the company with no other choice but to remove the content in the United States....

"This will not end the fight for online freedom of speech. Backpage.com will continue to pursue its efforts in court to vindicate its First Amendment rights and those of other online platforms for third party expression."

The senate subcommittee is scheduled to convene tomorrow, January 10, at 10 a.m. This post will be updated as events warrant.

Backpage's decision to self-censor came hours before its current and former executives were set to testify before the U.S. Senate's Permanent Subcommittee on Investigations, which had telegraphed its hostile view of the listings leviathan. At issue are the company's controversial adult advertisements, which critics claim are responsible for acts of prostitution and human trafficking.

Backing up its claims, late on Monday the subcommittee issued a 50-page report based on Backpage memos, emails, and other subpoenaed documents. The report asserts that the company used internal filters and human moderators to edit the ads placed on its site by escorts, strippers, dominatrixes, and the like, in order to hide the true nature of listings that advertise illicit sex.

"Backpage has maintained a practice of altering ads before publication by deleting words, phrases, and images indicative of criminality, including child sex trafficking," the report’s executive summary states. "Backpage has avoided revealing this information.... Those practices served to sanitize the content of innumerable advertisements for illegal transactions — even as Backpage represented to the public and the courts that it merely hosted content others had created."

The report details a process by which an electronic feature called a "Strip Term From Ad Filter" deleted code words such as "lolita," "teenage," "innocent," and "school girl" prior to publication. Backpage also employed a team of monitors to police the ads, according to the report, which includes quotes from some Backpage monitors, one of whom described the filtering process as trying to put "lipstick on a pig."

Additionally, the report claims that former owners Michael Lacey and Jim Larkin financed the sale of the company to current CEO Carl Ferrer in 2014 to the tune of $600 million. As a result, Lacey and Larkin "retain significant financial and operational control, hold almost complete debt equity in the company, and still receive large distributions of company profits."

Lacey and Larkin — the co-founders of the Phoenix New Times and former owners of the alt-newspaper chain Village Voice Media (now Voice Media Group) — fired back in a statement released Monday night, framing the battle over Backpage in First Amendment terms and stating that two years ago they sold their interest in Backpage "to the classified advertising operator who had founded the company," an obvious reference to Ferrer.

They point out that Backpage was created to compete with Craigslist, which in 2010 closed its adult section, bowing to government pressure. Advertisers in the adult section migrated to Backpage, which inherited the fight for freedom of speech, one in which the newspaper execs already were battle-hardened.

"Within a week state and federal officials demanded that Backpage.com follow suit," the statement reads. "We made the decision to fight what we saw as the same attempts at censorship we had faced numerous times in our four decades of print journalism."

Over the years, that First Amendment fistfight took Backpage into the courts, where the company has won significant legal victories, bolstered by Section 230 of the federal Communications and Decency Act of 1996, which states, "No provider or user of an interactive computer service shall be treated as the publisher or speaker of any information provided by another information content provider."

Section 230's grant of immunity intentionally offers a safe harbor for online publishers to edit and restrict certain material posted by third parties on their sites. That's what shields Twitter from being held liable for terrorists tweets and Facebook from being liable for libelous posts by its users. Backpage attorneys have used the statute to enjoin laws in three states written with Backpage in mind.

More recently, Section 230 prevented California Attorney General Kamala Harris from prosecuting Lacey, Larkin, and Ferrer on criminal charges of pimping and conspiracy to pimp. Harris, whom California voters elected to the U.S. Senate this past November, argued that the men had profited from prostitution allegedly advertised on Backpage. She had the three men arrested and fought against their release on bond.

But the defendants won a decisive victory in December, when Sacramento County Superior Court Judge Michael Bowman ruled that Backpage is protected by Section 230 and threw out the case.

"Congress has precluded liability for online publishers for the action of publishing third party speech and thus provided for both a foreclosure from prosecution and an affirmative defense at trial," Bowman wrote in his decision. "Congress has spoken on this matter and it is for Congress, not this Court, to revisit." [Emphasis in original.]

Bowman addressed the issue of the alleged editing of Backpage ads, rejecting Harris' argument that because the ads had been reposted in a slightly altered form to other sites the company owned, Backpage had crossed the line from publisher to content provider.

Days before her term as attorney general ended, Harris refiled the pimping charges and added 27 counts of money laundering.

In the shadow of this development, the Permanent Subcommittee on Investigations announced its January 10 hearing, at which the men would appear.

That release, and the subsequent report of the same name, showed the senators were intent on payback for Backpage's defiance of the subcommittee's 2015 subpoena for the company's records and for Ferrer's failure to appear at a November 2015 hearing at which Portman and others painted Backpage as the epicenter of an international online black market for illicit sex.

As a result, in March of last year the Senate unanimously voted in favor of a civil contempt resolution authorizing legal action to force Backpage to comply with the subcommittee's records subpoena. A U.S. District Court judge ordered Backpage to obey the subpoena, whereupon Backpage asked the U.S. Supreme Court to intervene. The high court issued a temporary stay, but ultimately the motion was denied.

In its Friday release, the subcommittee estimated Backpage's annual revenues at more than $150 million and alleged that the company "has been linked to hundreds of reported cases of sex trafficking." In addition to Ferrer, Larkin, and Lacey, the announcement promised testimony from Backpage's chief operations officer, Andrew Padilla, as well as from parents of sex-trafficking victims.

Contacted for comment, lawyers for Lacey, Larkin, and Ferrer referred New Times to the statements from Backpage and others released last night.

Asked last week for his opinion of the upcoming hearing, Santa Clara University law professor Eric Goldman — co-director of that school's High Tech Law Institute and author of the Technology, Marketing and Law blog, a go-to site for tech legal news and analysis — scoffed at the subcommittee's lack of subtlety.

"I love when the hearing title assumes its own conclusion," Goldman wrote in an email. "This is fairly typical 'spin' for Congressional inquiries. Why bother having the hearing unless it's addressing an important issue?"

At the time, Goldman speculated that "[t]he testifying Backpage witnesses are going to pick their words extremely carefully because their testimony is relevant to the active criminal prosecution and plenty of potential ones, And if the witnesses misstate anything, they face an additional risk of being prosecuted for lying to Congress.... I assume the witnesses' remarks will all be tightly scripted in advance and they will do everything they can to avoid deviating from that script."

Goldman noted that Congress passed a law in 2015 aimed at Backpage: the Stop Advertising Victims of Exploitation (SAVE) Act, which made it a felony to knowingly publish ads that involve child prostitution or adults coerced into prostitution.

The key word is "knowingly," which lawyers call a scienter requirement: Federal prosecutors would have to prove that Backpage executives knew that an add posted by a third party involved minors or adults forced to prostitute themselves — a high bar to meet.

But the subcommittee's conspicuous deployment of the word "knowing" when titling the hearing and its 50-page report indicates that it may believe it has met that bar.

Regardless, as Lacey and Larkin's Monday-night statement makes clear, the subcommittee's determination to try them in the court of public opinion may well have implications for Section 230's status as a firewall — and, by extension, for the entire online tech industry.

"We believed we would secure Backpage's free speech rights in the courts, and we did," the statement reads. "What we did not foresee is that a vindication of Internet speech and privacy rights in the federal courts would lead to what Judge Richard Posner of the Seventh Circuit U.S. Court of Appeals called illegal 'official bullying' by government actors aimed at the 'suffocation' of Backpage. This effort is spearheaded by headline hunting politicians who understand that government-regulated banks and credit card companies won't lift a finger to protect the First Amendment rights of websites and Internet users from government intrusion."

Read Backpage's statement on the removal of its adult section:

Read the report on Backpage from the U.S. Senate Permanent Subcommittee on Investigations:

The PSI's report on Backpage
KEEP PHOENIX NEW TIMES FREE... Since we started Phoenix New Times, it has been defined as the free, independent voice of Phoenix, and we'd like to keep it that way. With local media under siege, it's more important than ever for us to rally support behind funding our local journalism. You can help by participating in our "I Support" program, allowing us to keep offering readers access to our incisive coverage of local news, food and culture with no paywalls.
Make a one-time donation today for as little as $1.