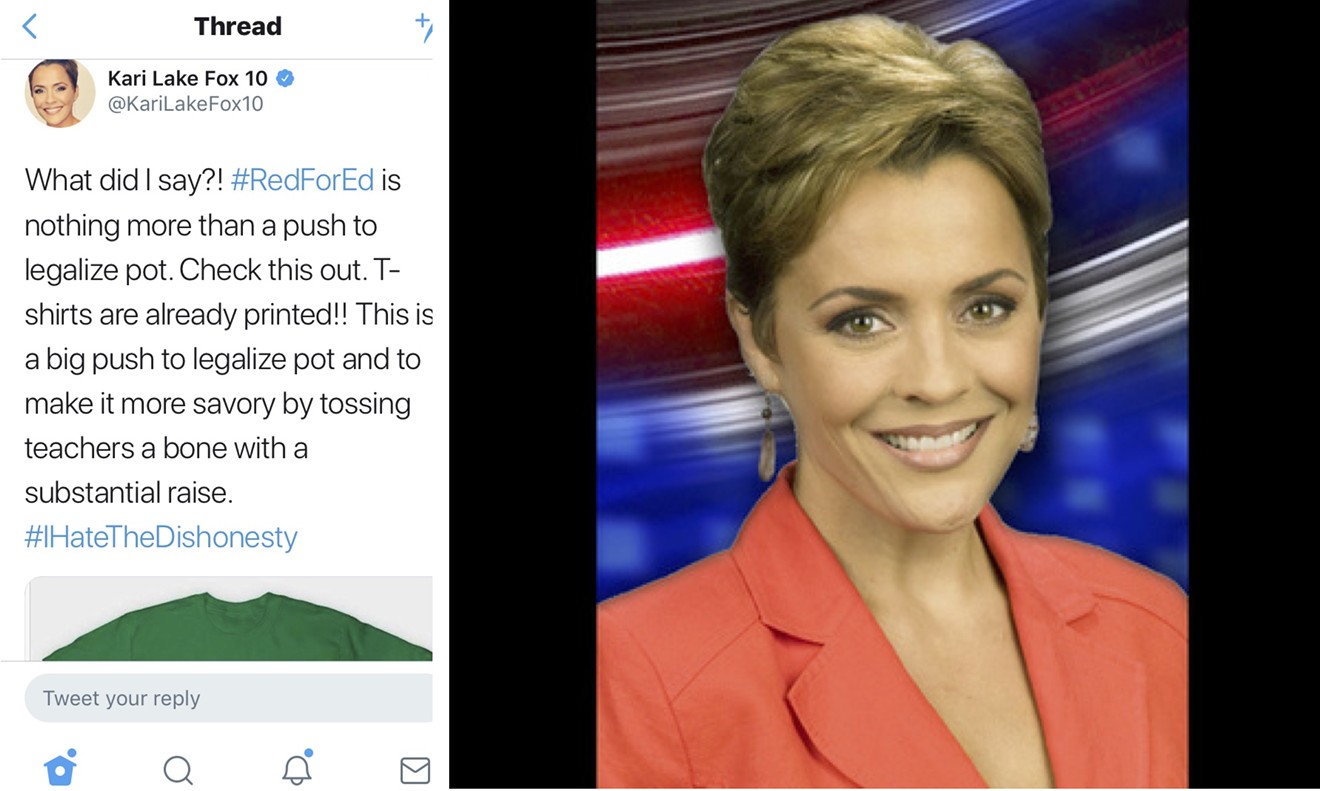 A Phoenix television anchor is claiming that the #RedForEd movement of striking teachers is actually an underhanded maneuver to legalize recreational marijuana in Arizona.

On Tuesday, Fox 10 Phoenix (KSAZ-TV) host Kari Lake tweeted an image of a T-shirt to back up her idea. The shirt showed a marijuana leaf overlaid on the state of Arizona and the words #GREENforED. A version of the design that Lake tweeted is for sale on the independent T-shirt marketplace Teepublic.

"What did I say?!" Lake wrote on Twitter. "#RedForEd is nothing more than a push to legalize pot."

The existence of this T-shirt proved that her theory was right, Lake said in her tweet.

"This is a big push to legalize pot and to make it more savory by tossing teachers a bone with a substantial raise," she wrote.

By Tuesday evening, Lake's tweet had been deleted amid a slew of backlash. In the replies to Lake's tweet, people criticized her for using a single T-shirt design to draw sweeping conclusions about the grassroots push to raise teacher pay.

"That's it?" replied Ian Schwartz, a local meteorologist at 3TV/CBS5. "lol One t-shirt to make that claim?"

Teachers in Arizona will go on strike tomorrow over low wages and school funding, a move spearheaded by the #RedForEd movement which began in early March.

A ballot measure to legalize recreational marijuana in Arizona was defeated in 2016. Medical marijuana, however, is legal.

Lake, who co-anchors the evening Fox 10 news programs, was unavailable for comment, according to a Fox 10 representative. Emailed questions to the newsroom were not returned.

Before deleting her tweet, Lake wrote back to some of the commenters. Lake said that she is "pro-teacher" and wants them to get a pay increase, but added that "raises shouldn’t come at the expense of legalizing a substance that could very easily get into the hands of our kids."

Earlier on Tuesday morning, Lake had floated the teacher-marijuana conspiracy on her Facebook page, where she surmised that marijuana-legalization proponents are funding #RedForEd.

"Keep hearing calls for legalizing pot to fund teacher raises. Starting to think that has been the end-game all along," Lake wrote. "How much Legalize-Pot $$ is being poured into Red For Ed? Or are the legalize-pot-folks just piggybacking on the teacher pay issue? Either way, it seems unsavory."

When teachers announced on April 19 that they would walk out of schools, Lake also raised doubts about their intentions. "The elephant in the room nobody wants to talk about is the impending governor election," she wrote on Twitter. "How much of the teacher strike is politics?"

"I made an incorrect conclusion in my tweet, and for that, I'm sorry," Lake said. "I respect teachers deeply and I'm concerned that some are trying to use the teachers' fight for higher pay to move forward with their own separate agendas."