Screen grab from YouTube.com
The President of the United States unleashed fire and fury on just about everybody but North Korea on Tuesday night at the Phoenix Convention Center. And then there was smoke outside the arena.

Donald Trump lashed out at Arizona’s two senators, “obstructionist” Democrats who won’t fund the wall that he once vowed Mexico would pay for, the conviction of former Sheriff Joe Arpaio “without a jury,” and especially “the very dishonest media.”

It’s what the president didn’t say, though, about Arpaio and Senators John McCain and Jeff Flake that resonated most in Phoenix.

Earlier in the day, the White House said there would be no pardon of Arpaio during the Phoenix visit. The former Maricopa County Sheriff was convicted of criminal contempt of court for during a bench trial earlier this month.

But then Trump couldn’t resist teasing the partisan crowd about halfway through his 75-minute speech.

“Do the people in this room like Sheriff Joe?” Trump asked. “So was Sheriff Joe convicted for doing his job?”

“I’ll make a prediction: I think he’s going to be just fine,” he continued. “But I won’t do it tonight because I don’t want to cause any controversy.”

Which, of course, he did.

Then he took on McCain and Flake without mentioning them by name.

He reminded everyone that the U.S. Senate "was one vote away" from replacing the Affordable Care Act. And of course that vote was McCain's, who was recently diagnosed with brain cancer.

"They (his advisers) said you made a beautiful speech (Monday) night ... don't mention any names," Trump bellowed. "So I won't."

Then he paused. "One vote away. But I will not mention name names ... that's very presidential."

Next, he turned on Flake. Again, no names.

“Nobody wants me to talk about your other senator, who’s weak on the border weak on crime … so I won’t … but nobody knows who the hell he is anyway.”

He pivoted to the border wall. Phoenix is where he first said Mexico would pay for it. Tuesday night, he blamed the Democrats for the failure to build it. Then he threatened them. “If we have to close down our government, we’re going to build that wall.”

The crowd roared, just as they had two years ago when he said Mexico would foot the bill.

But Trump’s strongest blasts were aimed at the media. He spent more than 15 minutes bashing "the very dishonest media ... those people right up there with all the cameras ... totally dishonest people."

His ire was directed at the press' criticism to his response to the racial violence in Charlottesville, Virginia.

“It’s time to expose the media … for their role in fomenting divisions in the country,” he said.

“They are trying to take away our history and heritage … I really think they don’t like our country. The only people giving a platform to these hate groups is the media itself.” 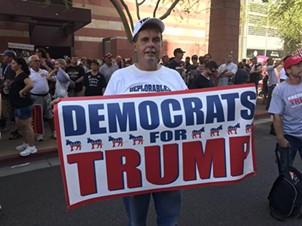 Lindsay Moore
He repeated over and over how he "strongly condemned" the white supremacists, the neo-Nazis, and the KKK who clashed with counter-protesters in Charlottesville, killing one when a white supremacist drove his car into a crowd.

"I openly called for healing ... I love all of the people of our country," he said.

He pulled out copies of his statements in the days following the Charlottesville riot and read directly from them.

However, he never mentioned the two phrases that ignited a hard backlash from conservatives and liberals – that there was blame "on many sides" or that there were "very fine people" on both sides in Charlottesville

He also called the New York Times “failing” as he always does and accused the Washington Post of being a marketing tool for owner Jeff Bezos’ other company, Amazon.

“CNN Sucks! CNN Sucks!” the crowd chanted over and over.

Finally, he dealt with North Korea and its dictator Kim Jong Un.

“I respect the fact that he’s starting to show some respect for the U.S.,” Trump said. “Maybe … just maybe … something positive will come out of that.”

North Korea, which has threatened to attack the U.S. territory Guam, received fewer boos than the media.

The crowd started to go home happy after that, but outside they were greeted by a greenish-gray smoke from pepper balls fired at a small group of protesters after the rally ended. Until that point, the protesters had both sides had been reasonably well-behaved.

Four people, including one juvenile, were arrested in connection to the confrontation. Police said there were no injuries and no property damage.

Phoenix Mayor Greg Stanton, a Democrat who had asked Trump to delay his campaign rally in light of what happened in Charlottesville, said the president’s speech and the potential pardon for Arpaio didn’t help the situation.

"He gave a speech that did continue to divide the country,” Stanton said this morning on MSNBC.

A look at what happened earlier in the rally, which ended around 8:30 p.m.:

"I'm thrilled to be back in Phoenix," the president began his speech, noting that his first appearance in the Convention Center two years ago gave his fledgling presidential campaign a massive boost.

"This was the scene," he continued. "People said right there at the beginning: There's something special happening here.

"You were here from the start and I will never forget Arizona."

After his introduction by the Reverend Franklin Graham, Vice President Mike Pence lavished praise on his boss and his first seven months in office

And at only seven minutes after 7, Pence introduced Trump. How's that for timing?

Official: Phx FD has treated 32 people for heat related illness, 2 to hospital. No arrests or other injuries A group of four camo-clad, heavily armed militia members were standing by the large police presence in riot gear at the corner of North Second and Monroe streets. They wore patches that said "Southern Arizona Militia." One had a patch on his backpack that said "silverback." And they were extremely reticent to talk to this reporter.

"You can't quote what he's saying," one leaned in and said as I stood by another militia member who was talking to a demonstrator.

Asked why they were here, the armed man said simply, "We're here to help."

"We are protecting ourselves," the man added. "That's why we're out here like this."

Earlier, demonstrators had been asking questions of the men: Why they were at the protest? "I don't know why they're trying to razz us," the bulky militia member said. As for identification, he refused to give a name and only offered that he was a "citizen of the great state of Arizona."

And were these four the only militia members? I told him they were the only ones I had seen. "There's more," he said with a grin. "You haven seen us."

6:00 p.m.: We Saw People Parking at Mrs. White's on Ninth and Jefferson streets

The light rails headed to #Phoenixrally are packed. Police have closed the 3rd and Washington stop in front of the convention center.


5:45 p.m.: No Surprise, Congressman Trent Franks Was There to Support Trump

The light rails headed to #Phoenixrally are packed. Police have closed the 3rd and Washington stop in front of the convention center.

A line of police stand between protesters and a few people with anti-Black Lives Matter and Islamiphobic signs downtown. #PhoenixRally pic.twitter.com/9ZKQyn6GDq

As protesters gathered outside the Phoenix rally, a Trump supporter asks a cop, "Hey, can you do me a favor and shoot them for me?" Cop chuckles. — Antonia Noori Farzan

4:30 p.m.: Confrontation Ends With a Handshake

Sarah Kader's grandmother survived the Auschwitz concentration camp during World War II. Kader says it's from her grandmother's example of strength that she learned this: To combat hate, you have to speak up.

The 34-year-old Tempe lawyer emphasized this as she spoke at the Never Again: Jews and Allies Against Hate rally at the Arizona State Capitol on Tuesday afternoon in sweltering 100-plus-degree heat. 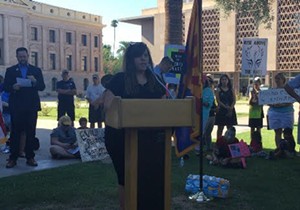 Sarah Kader speaks at the Never Again: Jews and Allies Against Hate rally.
Molly Longman
"If we have learned anything, it's that 'never again' means silence is unacceptable," Kader said. "I will not be silenced today, not tomorrow, not ever."

Just over a week ago, neo-Nazis chanted "Jews will not replace us" in Charlottesville. Today, Schapira said it was important to combat this kind of hateful rhetoric to keep history from repeating itself.

"It's incumbent for all of us ... as Americans to stand up against hate and intolerance," Schapira said. — Molly Longman


Counter protesters arrived and it got a whole lot louder. "We want Trump" chants are being met with "Go back to Russia." #TrumpInPhoenix pic.twitter.com/G6RAO7LEOs

3:00 p.m. What It Looked Like an Hour Before the Doors Opened


Just one side of the convention center for #TrumpInPhoenix. Line wraps around the whole building. Doors open in one hour. pic.twitter.com/Y4xsEmRGts

Those in line for #TrumpInPhoenix shout "peace and love" at protesters after shouting back and forth about the border wall. pic.twitter.com/mplwhPRHzE