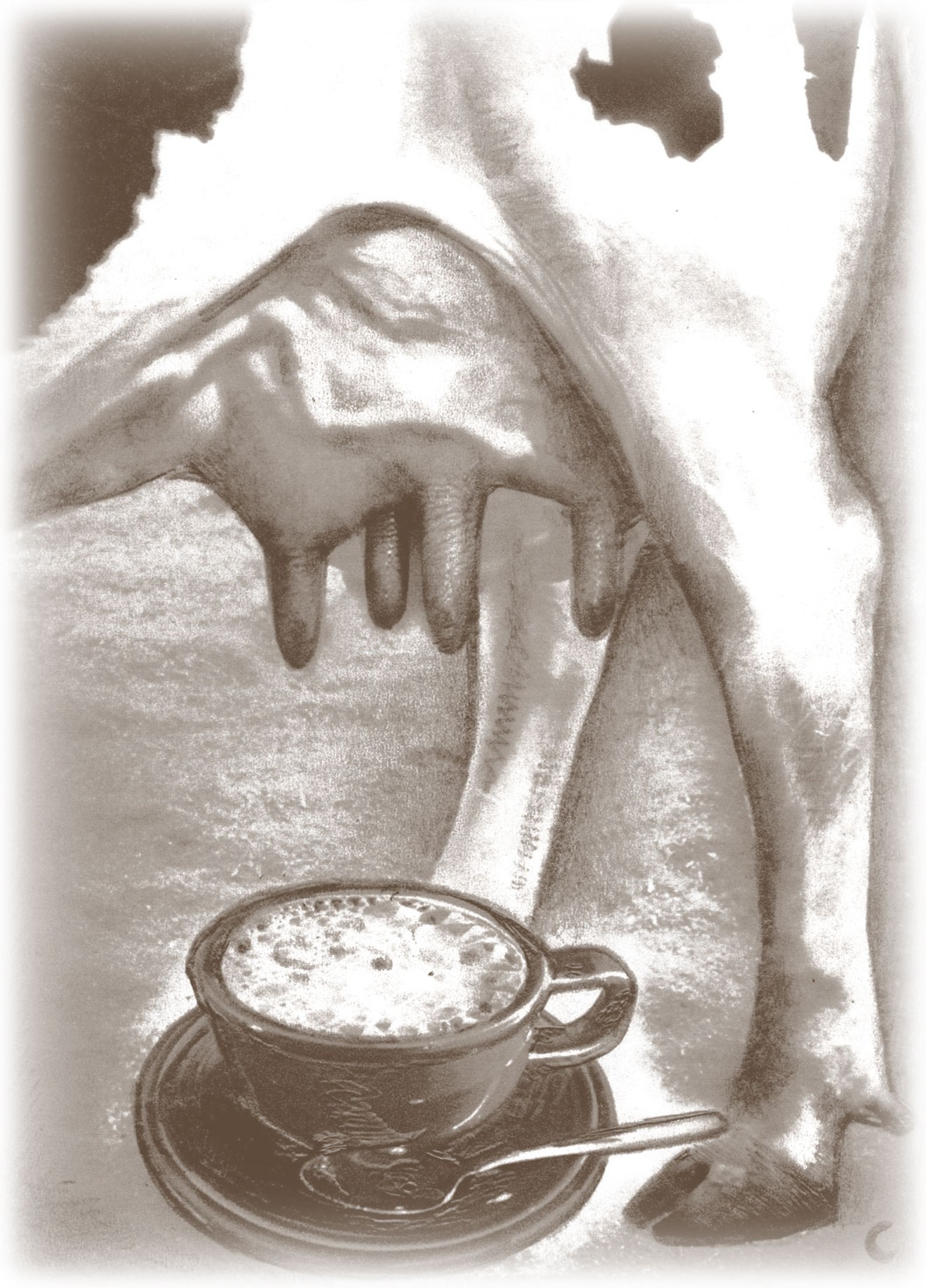 On the outskirts of southwest Phoenix, on a back road with views of alfalfa fields and the placid-looking Estrella Mountains, my husband and I are driving in circles. In my lap, I’ve got a beat-up notebook with the address of a west-side ranchito I’ve never seen or visited. This place, I’ve been told by a friend of a friend, might have the stuff we’re looking for.

We make a couple of wrong turns. We pass the same trailer park twice. Finally, we stop at the foot of a ramshackle horse property, which is framed on one side by a line of pinyon pine trees and on the other by a long, dirt path leading toward a two-story farmhouse. I don’t know the people who live here, but the address and description match the information I’ve been given.

We gaze up at the impressive farmhouse, which looks freshly teleported from the prairielands of Nebraska. A long metal gate, bearing a large and fully engaged U-shaped lock, blocks access to the property. I look around and see nothing resembling a crowd of people and cars, or Styrofoam cups, for that matter.

We sit in the car for a few minutes, entertaining ourselves with the rangy-looking billy goats wrestling in the yard, hoping the gate might swing open soon and other people will start showing up. Soon enough, though, it becomes clear that nothing is going to happen. The morning takes on an air of defeat.

As we leave the neighborhood, my husband — always the optimist — slows the car to study the handwritten signs tacked to every country fence post: Se venden pollos (chickens for sale), or Casa bonita de renta (pretty house for rent). But there are no signs that say: Se vende pajarete. Pajarete for sale.

The word pajarete is derived from paja, the Spanish word for straw. Straw, as in the natural material commonly used for barnyard bedding. Pajarete, as I’ve come to understand it, is the drink analog of a down-home country party. A barn party in a mug.

It’s a simple Mexican folk drink whose central ingredient is fresh cow’s milk, which is pulled straight from the cow’s udder into your cup. What distinguishes pajarete from other early-morning, milk-based beverages is the addition of alcohol, typically tequila, or maybe charanda, a rum-like alcohol derived from sugarcane. The drink’s palatability is enhanced by cocoa or instant coffee, which helps transmute the fiery milk into something resembling a boozy, frothy milkshake.

My husband and I have been searching for pajarete — and the barn party that we hope accompanies its consumption — for weeks. We’ve made several Sunday morning road trips into Buckeye, Rainbow Valley, and Tolleson, among other corners of the Valley, with no luck. We could probably make a version of pajarete at home, but that seems like missing the point of pajarete altogether.

Pajarete, in a larger context, is part of that glorious pantheon of drinks invented to make freezing winter mornings slightly more bearable. It’s a body-warming drink, one that wipes the fog out of your eyes and eases you into the day with grace. It’s a farmhand communion, an easygoing ritual among neighbors and workers. Pajarete, in other words, is not something you drink alone.

The first time I heard of pajarete, I found the idea of it enormously appealing, though I couldn’t really articulate why. It’s not its potentially stomach-churning blend of raw milk, booze, and coffee that intrigues me. It’s not the simple novelty of it, either. I think it’s the mythology of it. Pajarete’s reputation has evolved over the years from simple country drink to general cure-all of quotidian maladies. It’s said to soften the blow of hangovers, and stop migraines in their tracks. I haven’t yet heard it described as an aphrodisiac, but it won’t surprise me if I do some day.

To my knowledge, pajarete’s curative properties have not been proven, and maybe they never will be. The drink’s reputation, like all things a little mysterious, is amplified by its relative obscurity. Pajarete is most commonly found in the countryside, particularly in the Lake Chapala region of the state of Jalisco, not very far from where my mother was born.

This is the part of the story where pajarete, by virtue of the mind’s crude way of making associations, becomes forever linked to my mother. When I think of Jalisco in the 1940s and 1950s, when my mother was a child, I conjure images of handsome charros. I heard stories of them growing up, and we all grew up sighing over them in old black-and-white movies. I imagine them tending to their gorgeous horses in hacienda courtyards. I imagine them around cow stalls, sipping on some version of pajarete. And I imagine my mother as a young girl in that beautiful and isolated red dirt country. She grew up in a small town, a landscape of churches and ranchitos draped over hillsides. I think of her tiny schoolhouse, still standing the last time I visited, where my mother’s teacher, nicknamed Julia la Burra (Julia the Donkey) by the kids behind her back, disciplined students by making them raise both their arms, keeping them high in the air all morning, as a creative form of corporal punishment. Like many girls in that place, my mother was taken out of school after she finished the third grade. Girls from poor families were lucky to make it all the way to third grade, she told me once.

I grew up in a very different time and place, obviously. But the gulf between her childhood and mine was bridged by religion, especially the simple, loving rituals that were practiced daily in our home. Love was often expressed through gesture: She made the sign of the cross over my forehead twice every day for about 18 years. My bendición, my morning and my night blessings. She prayed to obscure saints for favors big and small — to help my brother and me pass our school exams, to keep us safe from kidnappers and deviants, to get us safely across town. Candles were lit for the sick, rosaries murmured in their honor. Like millions of other Mexican-American kids, my childhood was forged in the kind of old-fashioned Mexican-Catholic upbringing that is common enough, but which from the outside probably looks like a strange universe governed by superstitions.

I still take enormous comfort in my mother’s prayers, even as I’ve stopped being the kind of person who prays beside her. There is sadness in things lost. So many of those traditions, even the memory of them, are lost to me now. I did my First Communion as a kid in a south Phoenix church whose name I can no longer remember. I cannot remember the words to songs that used to bring enormous comfort, or the last midnight Mass I attended with my mother. Mine is a common story. Many people, for whatever reason, do not carry on the old family ways, the things we look back on and label “superstition.” What happens, though, to the old rituals? Do we trade them in for new ones? And how do you fill your empty Sunday mornings?

For my part, I’ve come to understand that superstition is not just the province of religious thought. I believe we all need a little magical thinking to survive, rituals whose strange powers only we can see or feel. I look for rituals all the time to connect myself to my own history and culture. I look for excuses to laugh with strangers on wintry Sunday mornings, and hunt for blessings in everything. I go searching for a drink that someone told me once could cure every pain in my body. I hope someday I find it.
KEEP PHOENIX NEW TIMES FREE... Since we started Phoenix New Times, it has been defined as the free, independent voice of Phoenix, and we'd like to keep it that way. With local media under siege, it's more important than ever for us to rally support behind funding our local journalism. You can help by participating in our "I Support" program, allowing us to keep offering readers access to our incisive coverage of local news, food and culture with no paywalls.
Make a one-time donation today for as little as $1.
Patricia Escárcega was Phoenix New Times' food critic.
Contact: Patricia Escárcega
Follow:
Twitter: @piescarcega