The astonishingly good brisket sandwich at Jalapeño Bucks in Mesa. Chris Malloy
If you leave Phoenix on Loop 202 East, the city thins, the highway gleams with hard sun, and the road points to the Superstition Mountains. About 10 minutes into the drive, exit 19 appears. Take that exit; drive a quarter-mile south. There’s not much to see in this neck of Mesa. Not much but an orange grove spreading on both sides of the road. In this orange grove, Jalapeño Bucks smokes brisket.

“These trees were planted in 1915, so they’re 102 years old,” says Duaine Burden, who with his wife, Dianne, oversees Jalapeño Bucks, which I believe is the Valley’s most underrated barbecue joint. “These are the oldest orange trees in Arizona right here.”

Burden’s family purchased the 32-acre grove in 1972. Burden grew up harvesting fruit, navel oranges but for a small section of mixed citrus. “We were five miles out here in the middle of nowhere,” he says. “Nobody came out here. This was as far as you could get away from town.”

The population of Phoenix has tripled since 1970. East Valley towns have seen growth and development. But still, the family grove sprawls through something of an off-highway hinterland.

Duane (far right) with his brother and dad, Todd and Ray, who work the orange grove and ship navels all over the country.
Chris Malloy
That never stopped the Burdens. The family opened a roadside store 35 years ago. Burden first put homemade hot sauce in the store 12 years back. One sauce turned to five. Five sauces turned to brisket that he would smoke on Fridays to sell on Saturdays. And then he incorporated burritos.

The farm store and eatery stand in a roadside lot where gravel pops under your tires. It stands in the ocean of orange trees, a Rivendell of smoked meat in what looks to be a food wasteland. Burden built the long structure from an old shipping container and pine salvaged from the Rodeo-Chediski fire of 2002. A wooden sign in front of the shack blares a painted message: “JALAPENO BUCKS IS ARIZONA STYLE BBQ.”

A line of early lunchers winds from shack to parking lot.
Chris Malloy
The rest of the sign supports this proposition by harping the negative, noting that Jalapeño Bucks is not Carolina, Kansas City, St. Louis, Texas, Kentucky, or Memphis style, all of which have been painted in a circle stricken through with a red slash. Jalapeño Bucks is adamant about its version of Arizona barbecue.

Burden is the pitmaster at Jalapeño Bucks. He smokes brisket, ribs, and pork butts. His 1,300-pound-capacity Oyler smoker from Mesquite, Texas, holds 120 racks of ribs. He hits ribs and pork butts with rub, brisket with just salt and pepper. The Oyler draws heat from Arizona red oak and pecan wood, for Burden “likes the smoke that comes from them.” With a knife like a yardstick he carefully slices brisket, mountain chains of bark separating as the flap and point become fatty slices, lean slices, and burnt ends. Nobody showed Burden any of this. He learned how to source, smoke, slice, sauce, and serve barbecue on his own. Out in an orange grove with no barbecue references, Burden created his own style. His surprisingly great barbecue exists somewhere at the murky meeting of southwestern, Mexican, and Mexican American.

Out back behind the kitchen, Burden pulls a pork butt from the smoker. He places the dark parcel coated with plastic wrap in a wide metal bowl, winds off the wrap. Black bark shows. Steam rises.

“This is what I call Arizona style,” Burden says, breathing coils that rise from the 24-hour-smoked pork. “It’s hot and I’m barehanded, but this is all you have to do to pull the pork.” He thrusts his hands into the bowl and grips the pork. Flicking his wrists he clenches and opens his fingers twice in a second. The pork has imploded, collapsed into pink hunks and shreds.

“I was never a barbecue person,” Burden says. “I figured Arizona style was whatever I made.”

Brisket sliced into its two halves: flap and point
Chris Malloy
At Jalapeño Bucks, Burden serves brisket, pulled pork, and ribs on platters. The best way to eat his brisket may be on a sandwich, lifted by an ethereal sweet bun that, like the smoker, comes from Mesquite, Texas. Burden griddles sliced brisket for a little Maillard brownness. He mounds it on a bun slicked with "thunder sauce," a mayo-based spread (his mom’s recipe). With a bit of the house mustard barbecue sauce, the sandwich is unreal.

When one looks past the platters and sandwiches, the menu at Jalapeño Bucks veers from standard American barbecue. The place does quesadillas. The place does burritos. The place fries its own tortilla chips. Five salsas and three barbecue sauces are offered, all scratch-made; eaters order them ala carte, hot green salsa or sweet barbecue sauce to charge whatever meal(s) you want.

This is where the lines of what we know as barbecue start to blur.

“NEW WAVE MEXICAN SOUL FOOD,” blares a lime-green sign by an orange row out back. 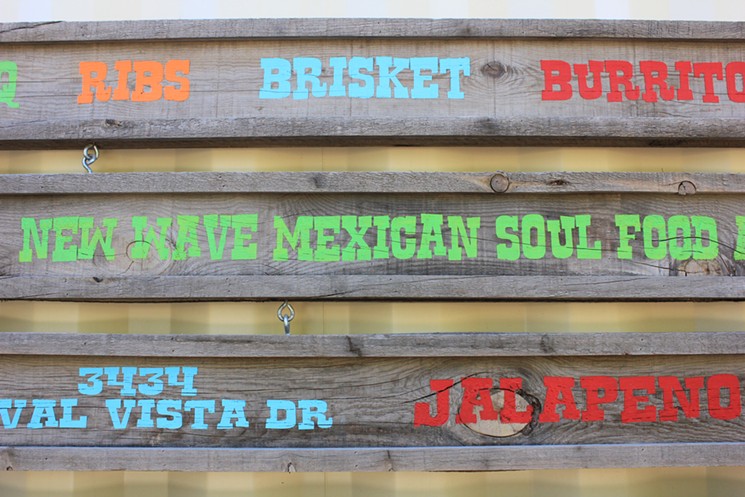 One of the many colorful signs on the Burden property
Chris Malloy
A pastiche of food cultures comes together to form Arizona cuisine. The primary influences that meld here are Southwestern, Mexican, and Mexican American — the same ones that Jalapeño Bucks blends. In The Border Cookbook, a James Beard-winning tome published in 1995, Cheryl and Bill Jamison outline the cuisine of the part of North America Arizona calls home: “In its most intrinsic, hearty form, the home cooking of the American Southwest and northern Mexico is a feast of vibrant and varied flavors developed over centuries of cross-cultural migrations. A culinary border never existed... If there was a boundary at all, it encircled rather than divided the area.”

Here, we have a specific region with a specific cuisine. The food of Arizona is a sub-category within the cuisine of the greater region, which has its own kitchen customs and traditions. Within this greater unit, Arizona has its own culinary contours (such as stronger Sonoran Mexican and general Sonoran influences).

Barbecue culture has recently spread to Phoenix. In the past, American barbecue has adapted to local foodways. Pulled pork is prominent in North Carolina because the state has been one of the country’s principal pig producers. Texas was once the land of longhorns and cowboys; it’s no shock that brisket and beef short rib are king in the Lone Star State. In parts of Texas and Oklahoma where Eastern European immigrants once settled, smoked sausage became a barbecue favorite. Now that barbecue has come to Phoenix in force, shouldn’t it adapt to Arizona?

It should. And however it diffuses, however it filters down the apparatus of our food culture, the result should be considered a legitimate American barbecue style. This may agitate a few southerners. Oh well. Barbecue, like all food, should be flexible and inclusive. 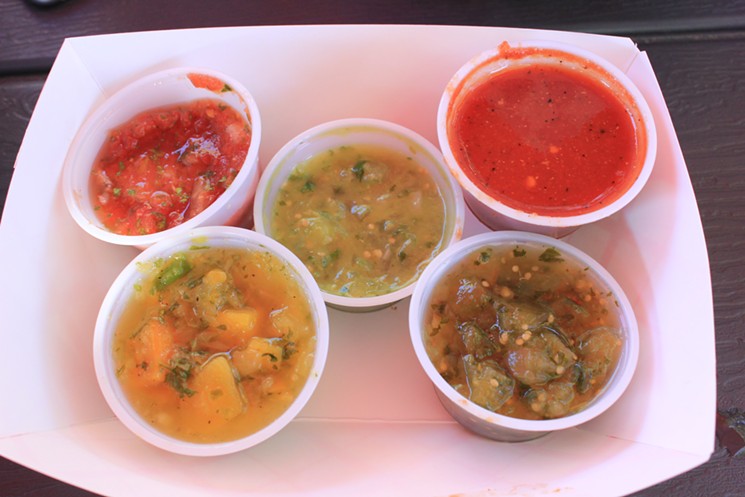 Refreshing house-made salsas bring an Arizonan dimension
Chris Malloy
The perimeters we set around cuisines are somewhat arbitrary. Cuisine is something that is constantly evolving. Italy didn’t have the tomato five centuries ago, and China didn’t have the chile pepper until more recently. There was no American barbecue in the recent past. As recently as 1997, long after American barbecue emerged, the late anthropologist Sindey Mintz was publishing convincing arguments that there was no such thing as American cuisine. The borders we set around foodways are inherently a little phony. On top of this, we live in a country of immigrants where ideas about food have been colliding for centuries, and where they collide faster and more violently now thanks to the Internet, even if you’re living out in an orange grove.

When you order from Jalapeño Bucks, you eat in the orange grove. 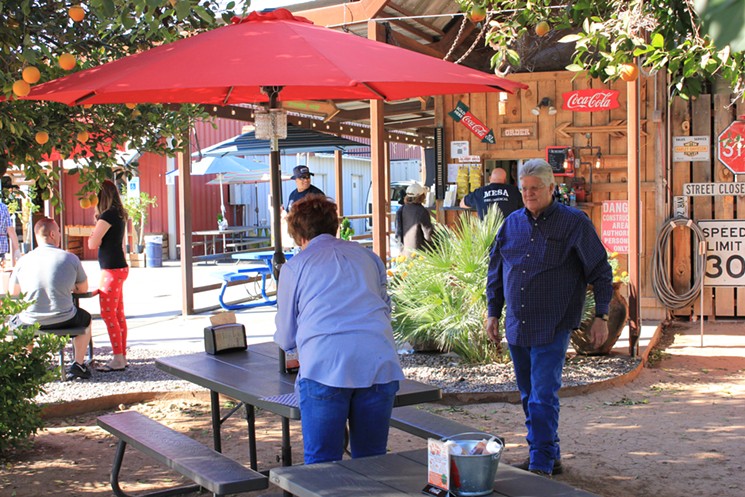 Outdoor seating in the navel orange grove
Chris Malloy
Some tables are out in the swaying trees. You can smell faint orange in the air until the food comes. Then you smell tomato-based sauce and smoky char, toasted flour tortillas and fragrant pork. Firefighters and other Mesa folks who frequent Jalapeño Bucks sit eating barbecue with sides of Mexican rice and refried beans.

The line gets longer as the sun climbs.

A quarter-mile back up the road, across the 202 East, the Salt River Pima-Maricopa Indian Community spreads. The reservation has 52,000 acres, and on some of them you can find pots of red chile, cooked the same way for more time than we can know. Many of the regs at Jalapeño Bucks sit eating not barbecue, but red and green chile burritos. Why not 'cue?

The meat for these burritos hasn’t been smoked; Burden makes his chiles in a more traditional manner. The red and green chile burritos exist outside of Burden’s style of Arizona barbecue. Though he has blended barbecue sauce with local chiltepin peppers and sources tortillas from a Phoenix tortilleria, he stops short of mixing some elements of southwestern cuisine with barbecue.

Part of the fun of eating barbecue in metro Phoenix lies in seeing where the lines have been blurred. There’s a thrill to detecting where a pitmaster has abided by old American barbecue traditions, and where he or she has lighted out and expanded them. This thrill melds with a deeper one: journeying out to the orange grove, getting your hands saucy, and discovering a barbecue spot like Jalapeño Bucks in the first place — traditional, Arizonan, or both. 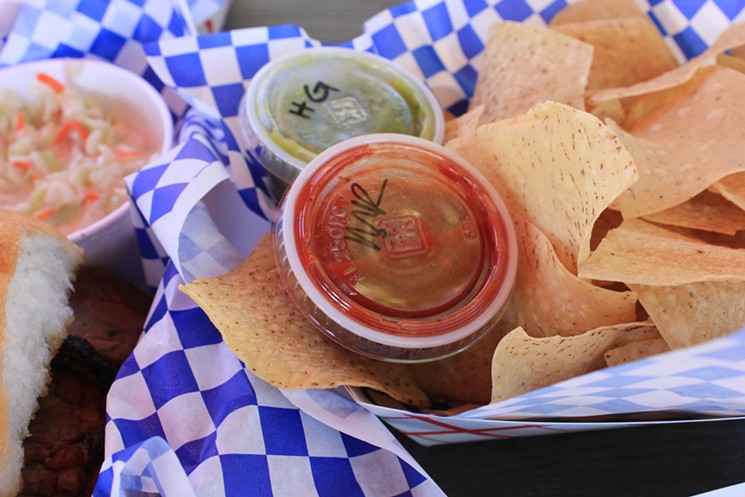