Zak's Chocolate in Scottsdale is well known for single-origin, high quality chocolate bars. But now, the shop has a new way to appreciate the aroma, subtle flavors, and terror of their painstakingly sourced coco beans: the single origin brownie flight.

For $8.50 you'll get three brownie, each made with a different coco bean. The flight I tried contained brownies made of Brazilian, Guatemalan, and Madagascar chocolate.

So, how should one approach this flight? Since I didn't taste them right there at the shop, Maureen Elitzak suggested a very quick warm-up in the microwave to get the molten chocolate nibs nice and melty. Just take care not to over nuke them and dry them out.

Start with one at a time, warming up just what you are about to taste, for around 10 seconds.

From there, I approached the flight like I would a wine tasting (minus the swirl and spit), smelling them, inspecting the texture, and then taking a bite. (I wish Zak's would throw in some raw coco beans, too, for a visual examination of the differences that begin at harvest.)

The brownies were arranged from Belizean to Madagascar to Guatemalan, and I assumed this was an intentional order based on intensity. I was right.

The brownie made with beans from Belize smelled like a typical chocolate brownie, the comforting, homey smell unadulterated with any other aromatic notes beyond the coco and sugar. The cake-like interior crumb was sweet and mellow. It was an easy to eat and easy to love rendition of the childhood classic. 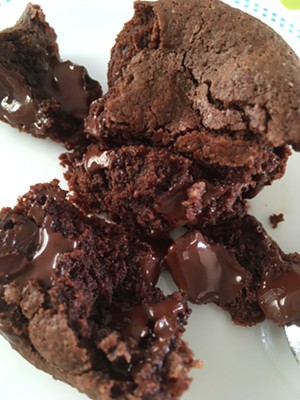 The interior of Zak's brownies are melty and rich with cocoa nubs.
Felicia Campbell
The Madagascar chocolate brownie smelled of bright, tart fruit, with an almost sour note. The melty, chocolate interior had such an intense cherry flavor on the back end of the bite that, for a moment, I wondered if the fruit had been added. The rich, bittersweet flavor, was more punctuated by the lingering, fruity notes, making it a captivating and surprising baked good.

The final brownie in the flight, made with beans from Guatemala, had such a delicate, floral aroma that I wondered if it actually should have been tasted first to fully appreciate its subtly. One bite put to rest these concerns. The deep, dark chocolate had the intensity of raw coco bean, softened only enough to remove any bitter edge. The round flavors of plum and other stone fruit mingled with the pure chocolate flavor for an immersive flavor experience. This is not your grandma's brownie. This is a serious chocolate pastry that will make you rethink all previous brownie experiences.

Tasting single origin chocolate in its bar or nub-form is a great way to develop a deeper appreciation for chocolate as an artisan product, but tasting it in brownie-form was a totally different experience, which somehow highlighting the subtle, and not-so-subtle differences even better.

Order your flight at Zak's Chocolate in Scottsdale or via their website.