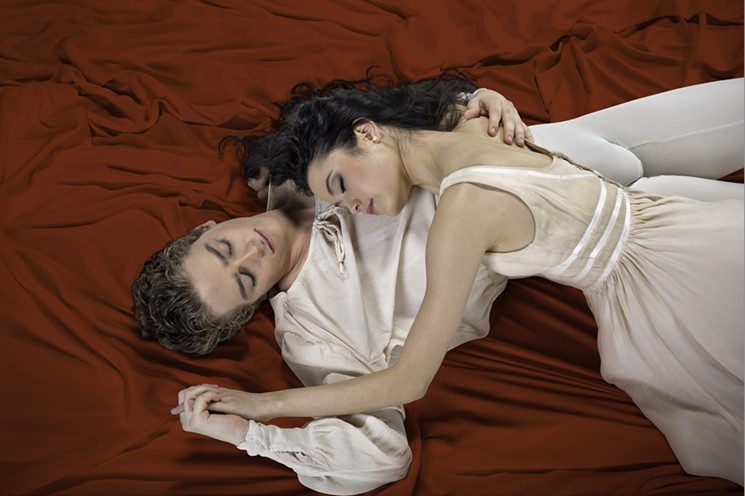 Four decades ago, Andersen danced the role of Romeo in the Royal Danish Ballet production choreographed by John Neumeier, which lives on thanks to YouTube.

Tickets for Ballet Arizona’s Romeo and Juliet, which continues through February 12, start at $25. Arrive 45 minutes before the curtain goes up to enjoy a free pre-performance chat, so you’ll have a bit of back story about the ballet and how Ballet Arizona is bringing Shakespeare’s words to life. But remember, romantics, after you’ve seen the show: Don’t try this at home. Visit the Ballet Arizona website. Lynn Trimble

González developed the play, which explores the lives of 10 people at a bus stop along the 40A Red Line, through the New Works Lab for El Teatro Campesino, a Latino theater company founded by Luis Valdez in 1965 along a Cesar Chavez picket line in California. La Esquinita, USA (for ages 16 and up) continues through Sunday, February 26, and tickets start at $25. Visit Arizona Theatre Company's website for details. Lynn Trimble Me, My Quantified Self, and I from Arizona State University professor Jessica Rajko is happening February 10 to 12.
Courtesy of Unexpected Art Gallery
Me, My Quantified Self, and I
Thanks to our newfound political status quo, understanding how digital spaces affect humans might be more important than ever. Thankfully, we have Jessica Rajko, an artist keen on exploring how, as she says, we perform data and data performs us.

Heady, right? That’s the premise of her new dance work, Me, My Quantified Self, and I, which debuts at Unexpected Art Gallery at 7:30 p.m. on Friday, February 10. Shows continue through Sunday, February 12, and auxiliary programming includes a performance from Jeepneys, a discussion about digital human rights, and cyber consultations. Step away from your Twitter trolls and take a seat at 734 West Polk Street. Tickets are $15 in advance or $20 at the door. Find details at Jessica Rajko's website. Becky Bartkowski

Craig Robinson will perform five stand-up sets from February 10 to 12 at Stand Up Live.
Courtesy of 3 Arts Entertainment
Craig Robinson
A couple things you might not know about comedian and actor Craig Robinson: He has a master’s degree in education and started off as a grade school teacher in the Chicago public school system. He found out he was also pretty funny, and later joined the Second City. The rest is history.

Now known for roles like Daryl from The Office, the “I Seen’t It” guy from Pineapple Express, and Reg Mackworthy from Eastbound & Down, Robinson is putting on five shows at Stand Up Live, 50 West Jefferson Street, #200, from February 10 through 12. Showtimes on Friday are 7:30 and 10 p.m.
Tickets are $30 for general admission, and there’s a two-drink minimum for this 21-and-over event. Visit Stand Up Live's website for tickets and information, or call 480-719-6100. Lauren Cusimano

The two-day competition is hosted annually at 2301 North Central Avenue in the Central Courtyard, Libby Amphitheater, and other spots. Things kick off on Saturday, February 11, from 9:30 a.m. to 5 p.m., with gates opening at 9 a.m. (Hours are the same for Sunday, February 12.) Tickets are $18 for adults, or $12 for American Indians and Heard members, and they include museum admission.

This outdoor event is lawn seating only, so bring folding chairs, blankets, and water. For more information, call 602-252-8840 or visit the Heard Museum website. Lauren Cusimano

The David Jones House was constructed in 1940 by prominent architect John H. Lester in the Willo neighborhood.
Diana Herman, Monte Vista
Willo Historic District Home Tour & Street Fair
Are you a house stalker? You know, the kind of person who’s dying to know what homes look like inside, as you pass by on your evening stroll.

The residents of the Willo Historic District are kind enough to give you a day off from straining your eyes. Their annual Home Tour and Street Fair lets you get inside some of the homes in this neighborhood that has become a coveted residential destination. On Sunday, February 12, get a firsthand look at how these historic houses have been restored and decorated. Outside, the street fair features different local vendors. The fair runs from 10 a.m. to 4 p.m. at Third Avenue and Monte Vista Road. Admission is $18. Visit the Willo Historic District website for more information, including a parking and trolley option. Amy Young

Experience Canada
You might have noticed that a highly polarizing figure assumed office in our nation’s capital recently. And for numerous reasons, not least of which is a promise to build an impenetrable wall along our nation’s southern border, interest in emigration to Canada has skyrocketed. Perhaps it’s no coincidence that the Musical Instrument Museum, 4725 East Mayo Boulevard, is hosting Experience Canada, which offers visitors a taste of Canadian music, culture, and cuisine.

So if you’re one of those eyeing our friendly neighbors to the north, consider stopping by the MIM on Sunday, February 12, for a closer look at your escape route. Sure, Canada has a dreamy prime minister, but they’re also responsible for Nickelback and Loverboy. These are things you’ll need to know. Festivities run from 9 a.m. to 5 p.m. and are free with cost of admission, $20. Visit the MIM's website or call 480-478-6000 for details. Rob Kroehler