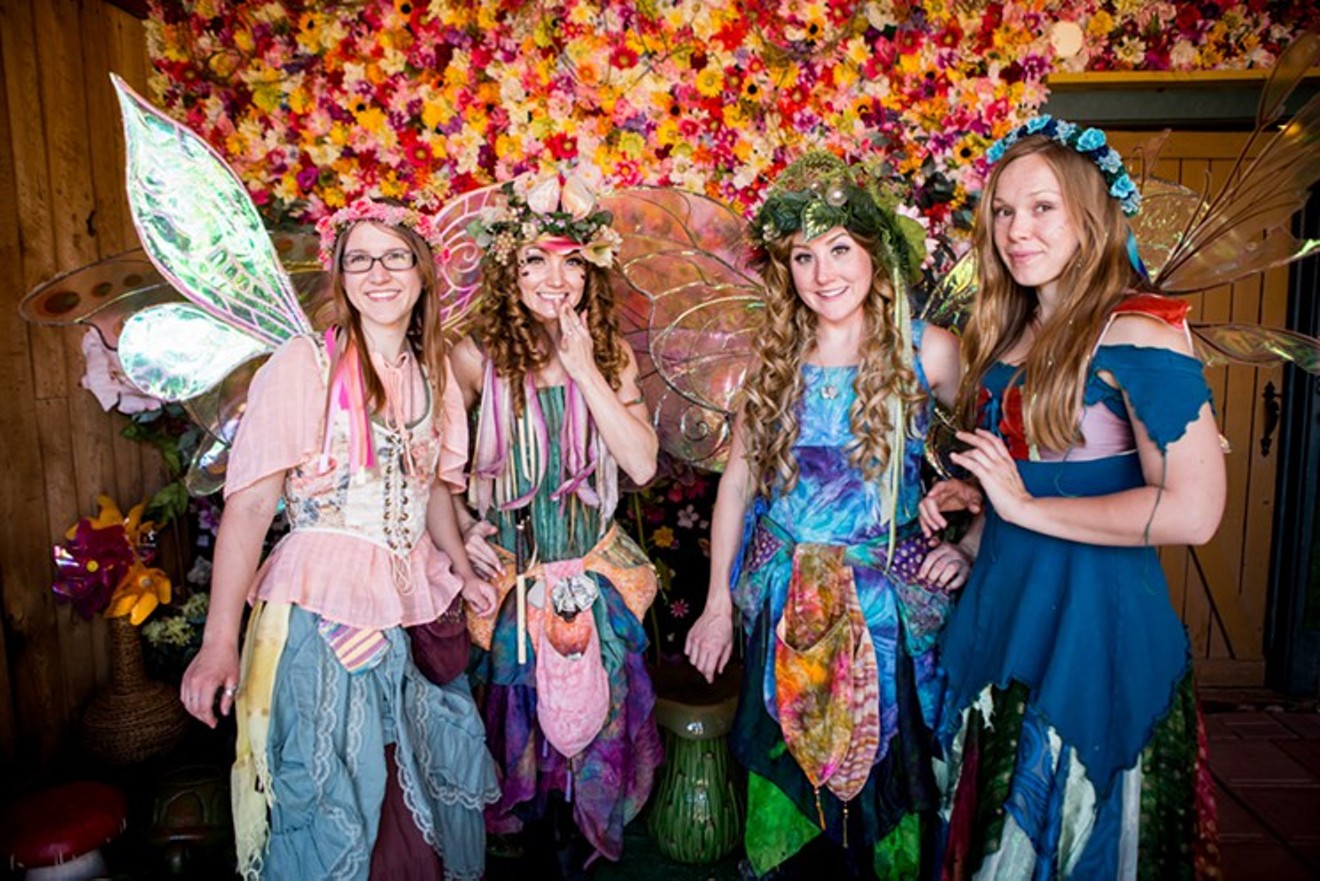 This annual event’s name is also what it hopes to inspire – sparks of creativity in its attendees. Wander through this immersive atmosphere to celebrate the work of different creators — all from right here in Arizona. It shows the importance of creative thinking and shows how others have manifested their unique ideas. Learn about the processes that brought these diverse works to life. There’s also live entertainment and optional ticketed programs. Get your creative candle lit at this intriguing annual happening. For details, visit the Mesa Arts Center website.

The beauty of the spring season is the focus of this one-night festival. The beautiful garden comes to life with soft lights that emphasize the colors and sounds of spring. Follow the lit pathways and explore this calming oasis that is in the heart of downtown. Traditional music will be performed in different areas, and guests can also enjoy tea in the Garden’s traditional tea house. Beer, wine, and sake are available for purchase, and food trucks with Asian fare are on-site all evening. Visit the Japanese Friendship Garden website for more.

It’s a celebration of Italy with arts, music, food, and handcrafted vendor items. Some of the area’s top Italian restaurants will be on-site offering their special takes on the food of Italy, like Marcellino Ristorante, Pasta Rea, and Tutti Santi. Vendors include the Queen Creek Olive Mill, Portabello Foods, and jewelry retailer Tres Elegantes Designs. Vince Chiarelli and his band are among the performers, along with singer Anna Calemme from Naples, and flag-waving group Gruppo Storico Sbandieratori di Fivizzano. Visit the Italian Festival of Arizona's website.

Each year, this event offers an afternoon of cultural celebration. This time, it’s France and Arizona that guests can learn about and enjoy via arts and crafts, live performances, interactive workshops, a French food market, and wine pairings. For more, visit the Scottsdale Center for the Performing Arts website.

Every spring, this juried arts festival takes over downtown Tempe’s Mill Avenue and surrounding streets, lining it with booths featuring work by artists from all over the world. It’s an opportunity to see and acquire unique art in different media, as well as enjoy vendors, food, and activities for kids. See more at the Tempe Festival of the Arts website.

These ladies met at Pride three years ago. Both were leaving the festival, and the girl on the right tapped the other lady on the shoulder to say she was hot. The rest was history.
Melissa Fossum
Phoenix Pride Festival
April 1 to 2
Steele Indian School Park
$15 to $30 for general admission; VIP tickets available

This annual event brings together Phoenix’s LGBTQ community and its allies to help raise awareness and raises funds for community programs — while shedding light on the civil rights issues the community faces. And they do it with one of the best two-day parties around. Multiple stages give you music and dance performances, and other happenings include an art exhibition, food vendors, and a dance pavilion where you can shake it all day and night. The Erotic World is for those 18 and older to see adult retail items, performances, and demonstrations. Kidspace is a play area for the young ones where they can get into some craft-making activities. Find details at Phoenix Pride's website.

If slimy and slithery things get you excited, head to the Arizona State Fairgrounds for this convention where reptiles are on display for your perusal. See live animal encounters, as well as exotic pets. Learn about these creatures from top breeders and educators. Pick up supplies from the many pet food and goods vendors on-site. See more at the Repticon website.

Though this year’s schedule is still being updated, the short films list has been announced. It includes Beresford Bennett’s Pinch, a movie about a forbidden office romance, and Xavier Neil Burgin’s Olde E, a story about a rising basketball star in south Los Angeles, and his father. This annual event hosts more than 20,000 visitors who come to see more than 150 independent films, attend parties, and mix and mingle with some of the celebrity guests. The weeklong happening is filled with film-related events and seminars. Find details at the Phoenix Film Festival website.

Last year’s inaugural event went so well, the folks behind the Bird City Comedy Festival decided to do it again. They’re not messing around, either. The lineup of local and national alt-comedy acts is diverse and stellar. From stand-up to improv to sketch, multiple comedy genres will happen on the various stages at this three-day shindig. Some of the performers include Greg Behrendt, a stand-up comedian and best-selling author who has done an ample amount of TV writing, and Mister Chris, who has a dark comedy Facebook show for grownups. See Bird City's website for more.

You should have mad respect for improvisational performers. Getting up in front of a crowd when you know what you’re gonna do is one thing. Winging it is another. This festival gathers together great improvisational performers and groups troupes like Portland, Oregon’s B&B, a married couple who deliver the laughs, as well as San Francisco’s Euro Trash, and Honey from NYC. Plenty of local troupes are stepping into the spotlight, too, including Galapagos, GIF of the Magi, and the Displacers. Visit the Phoenix Improv Festival website for more.

This yearly celebration is held to celebrate Arab-American culture, as well as educate the public on the community’s contributions and pride. See an array of music and dance performances, try different foods, and learn about services from area vendors. This year, the kids' zone is an expanded version, offering more games and attractions geared to those 12 and younger. See details at the Arab American Festival website.

This giant event turns Washington Street in downtown Phoenix into a mammoth party to celebrate Mexico’s victory over the French army in the 1862 Battle of Puebla. Prepare to get all senses working in overdrive, as the music is loud and the spirits are high. There are rides for kids, an abundance of traditional food options, Mexican wrestling, dancers, and vendors. Watch the Cinco de Mayo Festival website for a complete list of performers.

This is the ultimate destination for comic geeks and pop culture freaks. Don’t be afraid to slip on that Stormtrooper outfit, or that anime costume you’ve been stocking away; this is your scene. Mingle with other comic and sci-fi fanatics, look at the wares from hundreds of vendors, and meet some of your favorite stars. This year, some of the guests include Holly Marie Combs from Charmed and Pretty Little Liars, as well as Jason David Frank from Power Rangers. There are panels and plenty of peripheral events to keep you busy all weekend long. Visit the Phoenix Comicon website.