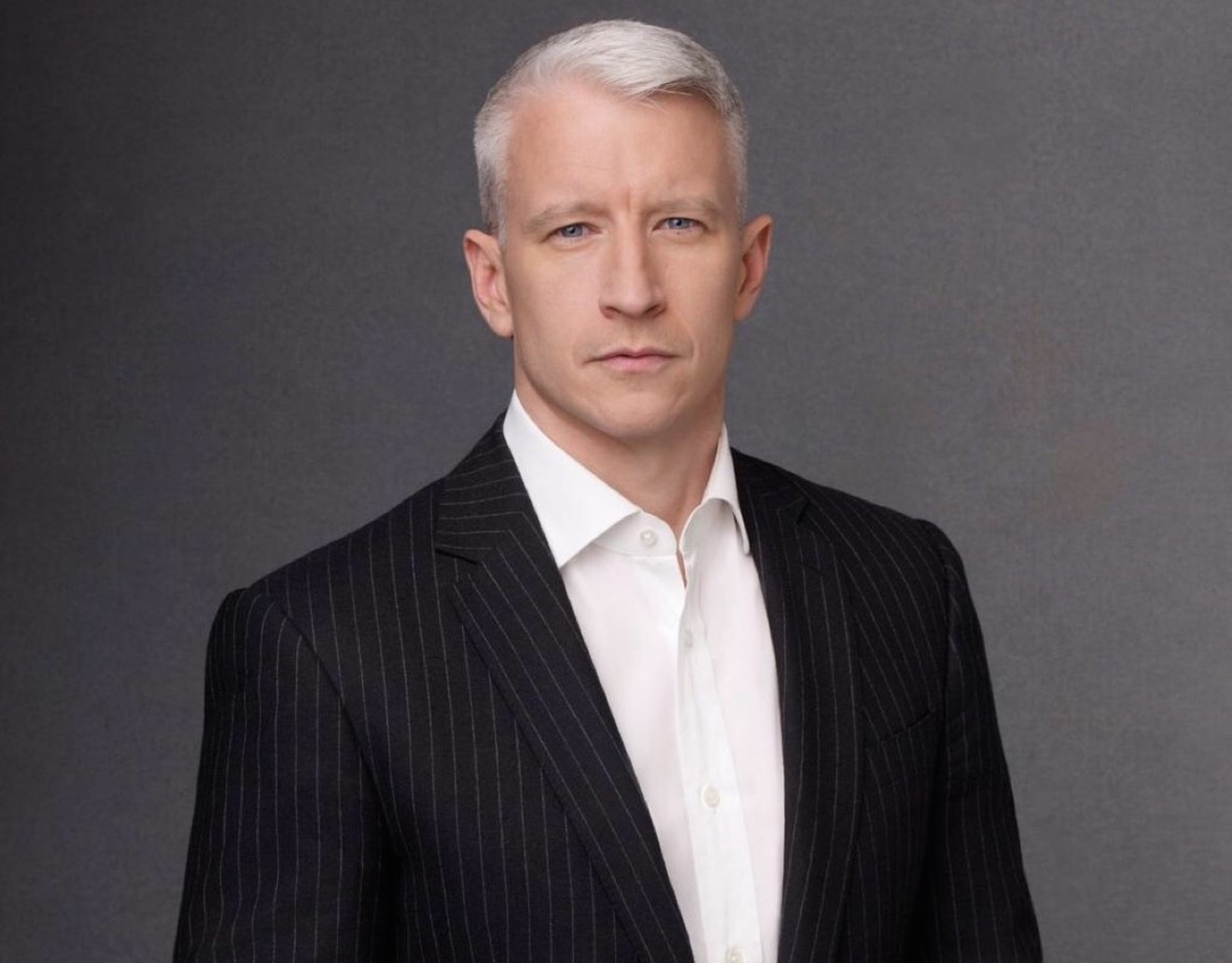 The duo behind the AC2 tour, coming to Phoenix's Comerica Theatre on Friday, June 9, never went on a date. At all.

Here's what happened: A mutual friend set them up. Cohen and Cooper talked on the phone. And Cooper called it off when Cohen broke Cooper's cardinal rule.

He asked about Cooper's mom, Gloria Vanderbilt. That was it.

Their meeting was far from a love match. But it was the beginning of a now decades-long friendship. It's the basis of the touring show they're doing, a sit-down evening with the serious CNN anchor of Anderson Cooper 360 and Bravo's gregarious Real Housewives wrangler and late-night host.

Bridging the gap between world events and pop culture, Cohen and Cooper share stories from behind the scenes of their jobs, as well as personal anecdotes.

New Times caught up with Cooper earlier this spring to talk about the show, his favorite hourlong dramas on Netflix, and, naturally, his ride-or-die Real Housewife.

New Times: Andy is very high-energy and you have a very straight newsman kind of vibe. How do those two things come together during these shows?
Anderson Cooper: We have an interesting chemistry. And that’s part of the reason the stage show is so fun — because people see a side of us that they don’t normally get to see, a side of me they don’t normally get to see. But it’s very much the way I am with my friends and with Andy.

And I think in some weird way … working in live television, there’s some similarities, even though kind of the stuff we do is different. Although Andy, frankly, feels completely like my world has now entered his world because everything is reality TV. So he’s convinced that, you know, Kellyanne Conway should be on the Real Housewives and that he can moderate a presidential debate because it’s all the same as a Real Housewives reunion.

Well, I mean, lately it kind of does feel that way.
I mean, he’s got a little bit of a point.

You mentioned he put the call out to Kellyanne, said, "Hey, come be a Housewife." She would be great at it, I would argue. But if you could take one person from the news cycle and toss them in with, I don’t know, a Nene Leakes, a Lisa Vanderpump, who would you love to see in the mix there? Who do you think could tear it up with those ladies?
You know, I don’t know. That’s more Andy’s line.

The thing that Andy loves to do is he likes to put awkward combinations of people together — that’s one of the things he does on the show — and he likes to create awkward moments. And it’s something he certainly likes to do with us on the road. He likes to sort of push me to see how far I go and what stories I tell. And the whole idea of the show, it’s kind of like hanging out with us for a night. It’s like going out for a drink with us, or going out to dinner with us. All the stuff we talk about is not the stuff we’d talk about on TV or anywhere else. Just an intimate night of conversation.

And it seems like people have been good about keeping under wraps what the show really consists of. How much does it change from night to night, from city to city?
It changes, depending where we are and what’s happening, and new things pop up and new crazy stories happen in our lives. So we like to keep it fresh in that way. But yeah, we do want it very much to be an intimate conversation, but just between the folks in the room. And there are stories we tell, where I’ll literally ask people: Please don’t tweet this out. This is just for us. And we show some videos of stuff that we’d only show there. It’s never been seen on television. It’s really kind of a glimpse behind the curtain of pop culture and world events.

And that’s such a fasinating part of it, too. You said Andy thinks everything’s one big thing now and, you know, it sort of is and it sort of isn’t. In recent years, there’s been a sort of, I don't know, trend I’ve noticed on the internet of people calling others out for paying attention to the wrong things. Like: Why do you care that this celebrity died when we have this dire situation in Aleppo? But the world is not an either-or place. It’s all of that. What do you make of that perception — that either you have the hard news or you have the fluffy fun stuff?
We have so much information at our fingertips and viewers and audiences are so smart today. They’re so culturally aware. They’re so full of information. I think people know that you can be interested in the world of politics and also like to go see scary movies or like watching the Real Housewives, but also like watching Sunday morning chat shows. And I think people realize that everybody is multidimensional. I don’t think it is this binary choice. I don’t think because you have a guilty pleasure, like for me it’s watching Netflix dramas and binge-watching dramas, it doesn’t mean you can’t be just as interested in current events and what’s happening or going overseas and doing the work that I do, in my case.

What are the dramas that you go to for your unwinding time?
I used to follow a lot of the Housewives and a lot of the reality programming. Now, it stresses me out. Now, I like to watch hourlong dramas and binge-watch. I like Narcos. I’m actually rewatching Narcos now because I’ve sort of watched everything that’s out there. So now I’m rewatching things because I need something. But yeah, I like things that are all-encompassing and suck you in and take you out of your day-to-day life. So Game of Thrones, Narcos, I watch a lot of obscure — on Netflix you can pick up all these obscure series from overseas. So there’s this series called Spirals, which is this French cop drama. There’s like six seasons of it, so it eats up a whole month or two of your life.

So you’re a little bit out of love with the Housewives, which I get. All of the franchises can be stressful to watch.
I like watching the reunion shows, because that way, even if I’m not caught up totally on a season of one, I feel like I can get caught up.

Well sure, because they go through literally everything that happened during the season. That totally makes sense. Do you have a ride-or-die housewife? One woman you’re just like: "This is my girl, I’m with her regardless."
I was a very big Nene Leakes fan. And I know she’s doing other stuff now, but I was very early on a fan of Nene Leakes. I’m probably the only anchor that she’s actually drunk-dialed.

What?
Yeah, she and Andy were in a car and I was actually working, doing my show on CNN, broadcasting. And I saw the phone rang, and then during commercial break I checked the message and it was Nene Leakes in the back of a car with Andy, yelling “Don’t be tardy for the party.”

I mean, what else? [laughs] What else would she yell?
Exactly.

That’s amazing. What’s the last Housewives reunion you remember watching?
Oh man, um, I guess it was the last Beverly Hills one. And Andy is taping them all the time. He just taped Atlanta, and just taped the new Beverly Hills, and he gives me little hints of what’s coming up. So it’s very fun to hear.

Do you get a little bit of fun out of it still?
Oh, absolutely. And also, I watch Andy’s nighttime show, Watch What Happens Live, so that also keeps me abreast of stuff.

As far as the show you two are doing, how can we expect to see the world events and pop culture elements fused together? Do you come in with particular talking points or stories?
We’ve been friends for 25 years, so it’s really stories that we know are gonna make people laugh and then the whole night is about ... giving a peek behind the curtain. It’s funny stories, bizarre celebrity interactions that Andy has had. And that’s ever-changing, because he has more bizarre celebrity interactions than anybody I’ve ever met — seemingly on a daily basis. And it’s all sorts of stories behind the scenes, you know, what happened behind the scenes at the debate I moderated or what happened behind the scenes at some reunion or some incident he had with various celebrities on his show. There’s just so much weird stuff that happens, and this is kinda the one place we talk about it.

Anderson Cooper and Andy Cohen bring their AC2 show to Comerica Theatre at 8 p.m. on Friday, June 9. Tickets are $58 and up through Live Nation.