Jackie Kashian is coming to Phoenix. The Gersh Agency
During the last three days of March, the third annual Bird City Comedy Festival will gather professionally funny people from across the nation for a weekend of hilarity. Credit for the annual Phoenix event's diverse lineup of seasoned veterans and strong up-and-comers goes to festival organizer and local comic Genevieve Rice. It features something for just about everyone.

To help guide comedy fans through the intimidating list of stand-ups performing, we rounded up five performers you should put on your schedule.

On her latest album I Am Not The Hero Of This Story, Jackie Kashian jokes about how she never used to do political material, but she has to now because she’s “human and alive in America.”

But this comedy veteran does not pick the low-hanging fruit from the funny tree. In fact, Kashian may be too smart for her own good, which has earned her the love and respect of her peers like Maria Bamford, for whom she frequently opens.

The comedian from South Milwaukee, Wisconsin is also the Head Ranger of The Dork Forest, a long-running podcast where Kashian and a guest discuss pop-culture obsessions in hilarious detail. Kashian will be recording an episode with guest Maggie Maye during the festival on Saturday, March 31. On a recent episode, she learns from stand-up Virginia Jones that Jennifer Connelly’s character in the Jim Henson film Labyrinth may have been the inventor of cosplay. Revelations such as that prove that Kashian can both blow your mind and break your funny bone.

Marcella Arguello is tall. Like Jessie Spano tall. And much like the nerdy character from the hit '80s show Saved By The Bell, the comedian from Modesto, California, finds that being more than 6 feet tall can be intimidating. In one of her routines, she talks about a recent date she went on with a shorter man that did not go well.

The brash comic recently took a break from the stand-up circuit to write for television shows, including James Corden’s comedic rap-battle show Drop The Mic on TBS and Netflix’s Bill Nye Saves The World. And her Twitter is a must-follow.

On his 2017 album Model Minority, Joel Kim Booster explains that his tough-love adoptive mother does not believe in awards for participation, but she thinks Confederate monuments should remain standing.

“But mom, those statues are history’s greatest participation trophies,” he deadpans.

Homeschooled in the suburbs of Chicago by two evangelicals, Booster works his sneaky sense of humor into the "nature versus nurture" debate, the homosexual conspiracy theories of The 700 Club’s Pat Robertson, and personal stories of hanging out at a gay Wiccan’s barbecue party.

In many ways, Model Minority is simply Booster introducing himself to a world he was shielded from until he was 16 years old. It's offbeat with a strong point of view that does not feel political or alienating. Last year, the writer for TruTV’s Billy On The Street premiered his Comedy Central Stand-Up Presents episode. So it's likely he'll be known as more than just a nationally ranked Bible quizzer very soon.

Amy Miller’s sardonic, conversational style and acerbic takes on contemporary issues led her to a successful appearance on season nine of Last Comic Standing and earned her the title of Portland, Oregon's funniest comedian. Then there's her brilliant 2016 album Solid Gold, which deftly touches on issues such as body image and white guilt through her own personal lens.

And she's no stranger to controversy. In 2016, a right-wing podcaster accused her of attempting to have his social media accounts suspended because of their ideological differences. In actuality, the host was taking trolling to new heights.

But there's no taking Miller down. 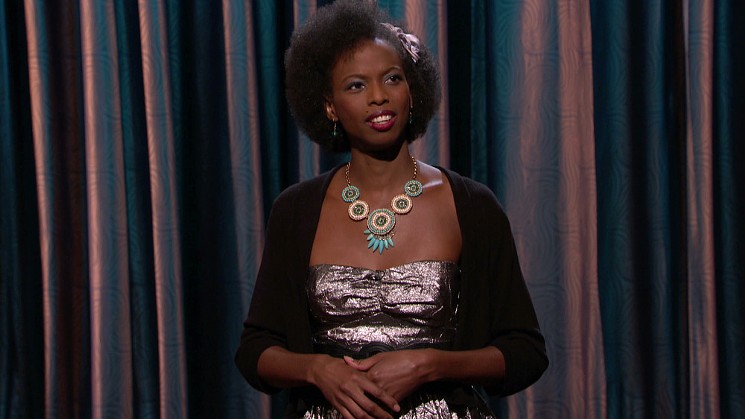 You don’t hear many jokes about agricultural scientist George Washington Carver, but Maggie Maye makes cracks about the peanut pioneer. In a 2015 clip from Conan, she turned stereotyping into a teachable moment about the subject of many a middle school history lesson.

The punchline is delivered in a humorously condescending but endearing way, like when your nerdy co-worker can’t understand how you did not know about that Easter egg hidden in the latest Marvel superhero film. The whip-smart Texas native frequently makes the rounds on the late-night comedy circuit, so it’s only a matter of time until she gets her own Netflix special.