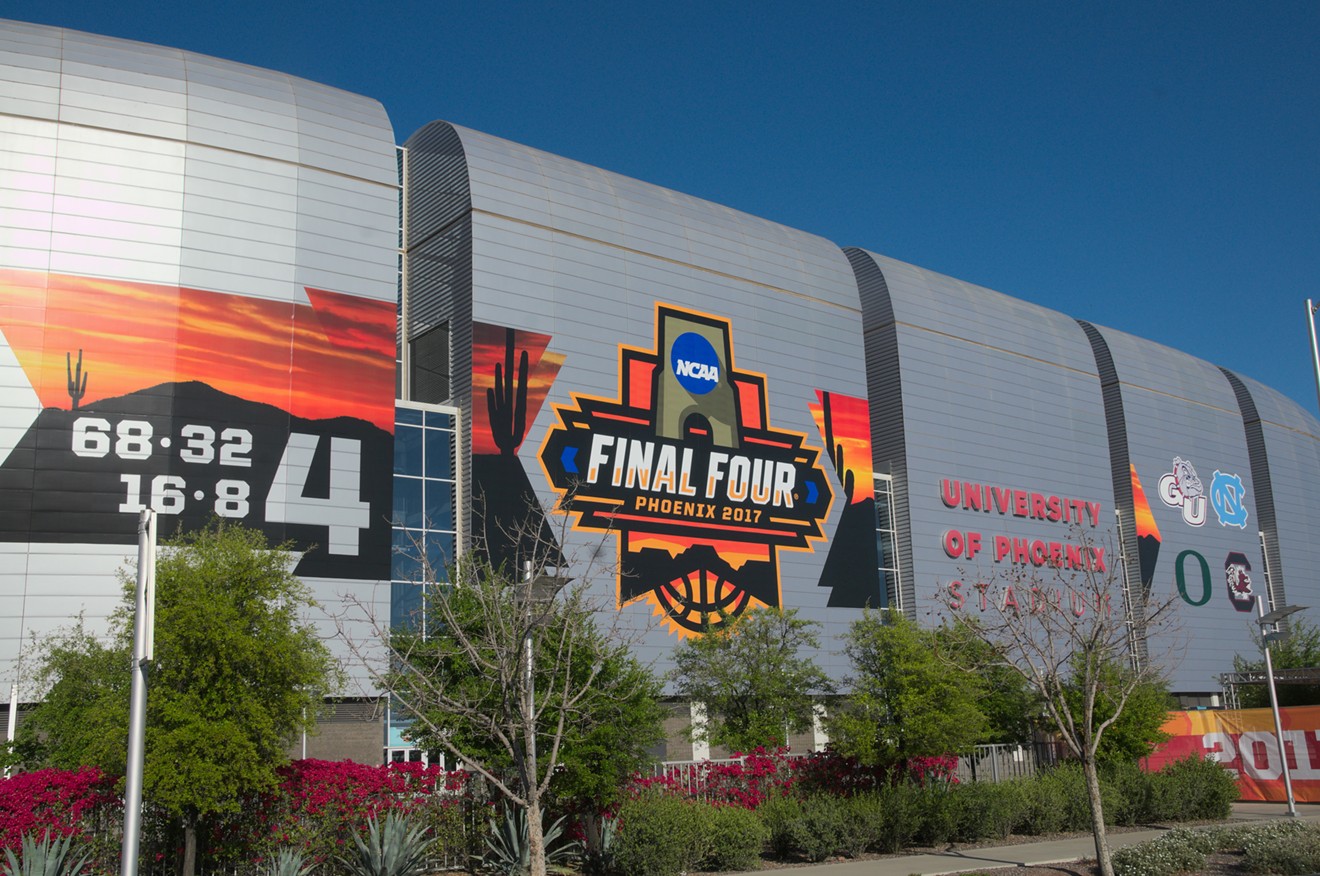 University of Phoenix Stadium in Glendale is all decked out for the Final Four this weekend. Benjamin Leatherman
The final countdown to this Final Four has begun. The teams have been decided (Gonzaga, South Carolina, Oregon, and North Carolina, FYI), the fans are getting pumped, and of Phoenix Stadium in Glendale is getting prepped for some of the biggest college basketball games of the year.

And all across the Valley, Final Four-related events are being planned.

All eyes are on Phoenix once again as another major sporting title, in this the NCAA Men’s Basketball championship, will be decided in the Valley. It's the first time that the Valley has hosted a Final Four, but it's not the first time we’ve been in the national sports spotlight.

“This may be our first Final Four, but it is not our first rodeo,” says Phoenix Mayor Greg Stanton. “We have successfully hosted both the Super Bowl 49 and the College Football Championship, and now Phoenix is once again to host tens of thousands of dedicated, passionate fans to what I believe is the most exciting sporting event in the world.”

And just like when the Super Bowl and College Football Championship Game came to town in recent years, there will be more than just jock-on-jock action taking place.

A slew of fan-friendly and basketball-oriented events connected with the Final Four will be happening from Thursday, March 30, up until the big game on Monday, April 3, including blockbuster concerts, fan gatherings, tailgating sessions, and other fun. Even Stanton will get into the fun, as hizzoner will take on a local youth in a game of one-on-one during the Final Four Fan Fest at the Phoenix Convention Center.

David and Goliath-style basketball battles between elected officials and members of their constituency won't be the only highlight of this weekend's Final Four events, however. Here’s a rundown of everything that will take place.


State Farm College Slam Dunk & 3-Point Championships
Thursday, March 30
Grand Canyon University Arena
There will be plenty of showboating and crowd-pleasing fun inside of GCU Arena when 24 male and female college basketball players from schools across the country show off their sharpshooting and dunking skills during this nationally televised event. Broadcast live on ESPN, it will feature six different competitions, including a slam dunk championship and three-point shooting battles for the men and women alike. Boom-! The action starts at 7 p.m. Tickets are $10 to $15.

Final Four Fan Fest
Friday, March 30, to Monday, April 3
Phoenix Convention Center
Like basketball? Then you’ll likely dig all the attractions, amusements, and events packed into this four-day fan extravaganza. In addition to a variety of youth clinics, interactive games, giveaways, and photo ops, you’ll also have the chance to meet and score autographs from a number of b-ball greats. NBA legends scheduled to appear will include David Robinson, Mike Bibby, and Christian Laettner, as well as Phoenix Suns stars Steve Nash, Shawn Marion, and Cedric Ceballos. Hours are from noon to 8 p.m. on Friday; 10 a.m. to 8 p.m. on Saturday, 11 a.m. to 8 p.m. on Sunday, and noon to 6 p.m. on Monday. Admission is $10 for adults, $5 for seniors and military, and free for children up to 12.

AT&T Block Party
Friday, March 31
Margaret T. Hance Park
The three-day March Madness Music Festival at Hance Park during Final Four weekend will tip off with this outdoor concert and party headlined by country recording artist Keith Urban. Other artists and acts will perform throughout the evening, which runs from 4 to 10 p.m. Admission free.

University of Phoenix Stadium in Glendale.
Benjamin Leatherman
Reese’s Final Four Friday
Friday, March 31
University of Phoenix Stadium
The public can attend hourlong open practice sessions by each of the Final Four teams at the stadium. Special tributes, programming, and events (like the Hardwood Heroes game) will also take place. South Carolina will practice starting at 11 a.m., followed by Gonzaga at noon, Oregon at 1 p.m., and North Carolina at 2 p.m. Doors open at 10 a.m. Admission is free.

Reese's College All-Star Game
Friday, March 31
University of Phoenix Stadium
Immediately following the practice sessions, the best players in NCAA Division I men’s basketball will take to the hardwood for this annual event, which will be broadcast nationally on CBS. Like with most all-star games, it will feature an east vs. west format. Tip-off is at 3:30 p.m. Admission is free.

Infinity Tip-Off Tailgate
Friday, March 31; Saturday, April 1; and Monday, April 3
Sportsman’s Park at University of Phoenix Stadium
If there’s one thing sports fans love to do before a big game, tailgating. And the 58-acre Sportsman’s Park outside of the stadium will host a massive pre-game celebration over three days with all manner of food, drink, and festivities. Highlights include skill challenges and other games, live music, pep rallies for the various teams, beer gardens, food trucks, vendors, and swag. Hours are 10 a.m. to 3 p.m. on Friday (when it’s free to attend); and from 11:30 a.m. to 2 p.m. on Saturday and 2 to 5:30 p.m. on Monday (when it’s only open to Final Four ticketholders).

Life-size March Madness brackets in downtown Phoenix.
Benjamin Leatherman
Final Four Dribble
Sunday, April 2
Downtown Phoenix
Dribbling a basketball while walking is no easy feat. It a certain amount of both hand-eye coordination and concentration, two skills that the youths who participate in the “Ready, Set, Dribble!” event will need in abundance. More than 3,200 local boys and girls will each bounce official NCAA basketballs while walking from Heritage Square to the Final Four Fan Fest at the Phoenix Convention Center. And while registration is closed for the event, the public is invited to watch the event and follow the bouncing balls across downtown. Start time is 11 a.m.

Phoenix Suns vs. Houston Rockets
Sunday, April 2
Talking Stick Resort Arena
Want to partake in even more b-ball action this weekend? The Purple and Orange Gang, who currently boast a lineup that's younger than most of the teams in this year’s Sweet 16, will host the Houston Rockets during the annual “College Hoops Night,” which will include giveaways of swag to the first 5,000 fans. The game starts at 6 p.m. Tickets are $28 to $178.

Scottsdale Final Three Tournament
Sunday, April 2
Bottled Blonde & Livewire
Ballers will battle for supremacy during this daylong streetball tournament taking place along Indian Plaza outside of Bottled Blonde and Livewire in Scottsdale’s entertainment district. Teams of three players each will face off in one of three different divisions (men 21 to 40 years old, men 40 and up, and coed). At stake is $3,000 in cash prizes, as well as plenty of bragging rights. The tournament is open to players 21 and over and runs from 9 a.m. to 6 p.m. Admission is free. Trash-talking is optional.

Capital One JamFest
Sunday, April 2
Margaret T. Hance Park
The March Madness Music Festival wraps up with performances by some of the biggest names on its lineup, including Aerosmith, and Ryan Lewis, and Blink 182. act Nathaniel Rateliff and the Night Sweats will provide the opening set. The jams run from 3 to 10 p.m. Admission is free.

NCAA Men’s Basketball Final Four
Saturday, April 1, and Monday, April 3
University of Phoenix Stadium
Basically, the centerpiece of the whole weekend. The semifinal matchups between Gonzaga/South Carolina and Oregon/North Carolina will take place at 3 p.m. and 5 p.m., respectively on Saturday, April 1. The winners will face off at 6 p.m. on Monday, April 3, for the championship. May the best team win. Believe it or not, tickets are available for all three games, albeit via resellers for anywhere from $125 to $5,000 apiece.