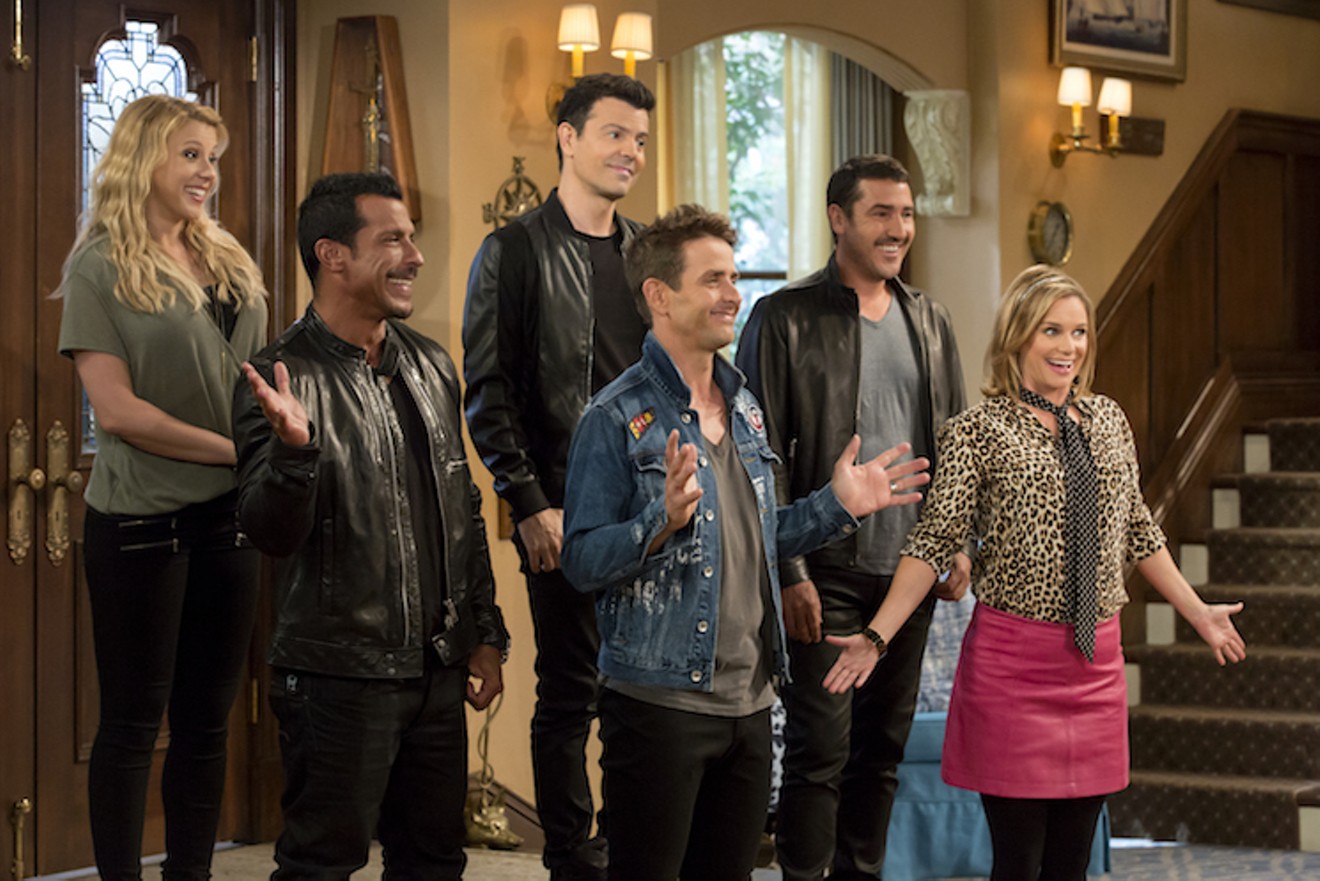 It's become very difficult to tell where we are in the Fuller House timeline. They've done themselves a bit of a disservice by constricting 13 episodes to take place between back-to-school to New Year's Eve (and for that matter, reaching Thanksgiving three episode ago). Fuller House super-nerds had documented DJ Tanner's birthday as February 9, 1977, but here we are in approximately mid-December 2016, and this episode takes place on her 39th birthday.

We appear to have some alternative facts being tossed around, but we're going with it.

Our birthday girl walks into to the kitchen and finds her family feverishly decorating for her "surprise" party. She insists that she told everyone that she didn't want to do anything big, but if the Tanner/Fuller/Gibblers have an opportunity for hugging, gosh darnit, they're gonna take it. She's quickly rushed out of the kitchen and into the living room to practice her surprise face.

Kimmy and Steph meet her out in the living room, where Kimmy unveils that she's discovered DJ's "dream board" of what she wanted to do before she turned 40. This includes sky diving (if she can get over her fear of heights), coffee with Ryan Gosling (if he isn't too busy starting the jazz revolution), and getting front row tickets to see New Kids on the Block. (Full disclosure: I work for Kobalt Music, and we released the New Kids on the Block's 2013 album, 10.)

Lucky enough for their self-proclaimed "biggest blockhead," they're playing that night in San Francisco — and Kimmy scored three front row tickets. An ecstatic DJ scurries upstairs to find her best '90s outfit when Stephanie notices that the tickets say "New Kids on the Clock."

Kimmy's been duped by someone on the internet and now DJ's best friends have a birthday to save. 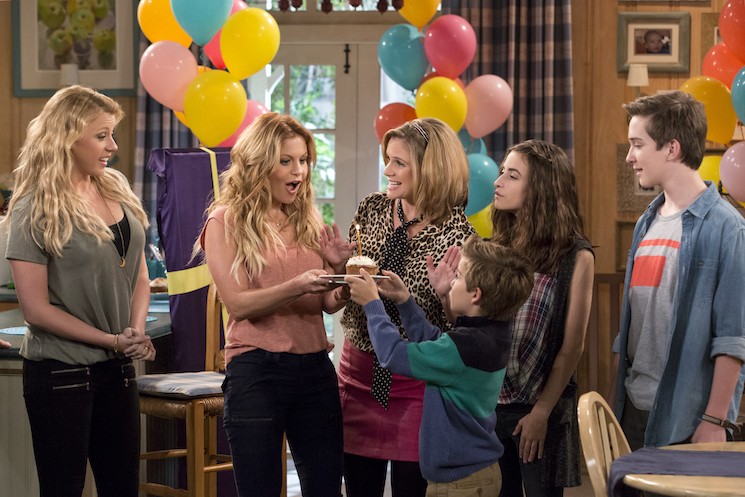 Celebrating her 21st birthday for the 18th time.
Michael Yarish / Netflix
A little while later, Kimmy announces that she has a "meeting" set up with the New Kids on the Block. Desperate to resolve this, Stephanie believes her. They head over to the arena and find a limo that has the guys. They try to sweet talk the driver, and when that doesn't work, she throws his phone out the window. After he runs out to get it, she locks the doors and rolls down the back window to find Jordan Knight, Joey McIntyre, Johnathan Knight, and Danny Wood in the back.

As it turns out, they know exactly who Kimmy Gibbler is, as she had been previously known to follow them on tour and steal their laundry.

Nevertheless, she persisted, begging them to give her three tickets to the show. Unfortunately though, it's completely sold out. However, she somehow knows their soundcheck schedule (hmm) and convinces them that they have more than enough time to surprise DJ at her "surprise" party. Hesitant at first, they agree so long as it means that Kimmy leaves them alone forever.

Back at the house, the family plus Steve and Matt gather in the kitchen for DJ's "surprise." She makes a very convincing surprise face and begins opening presents. The kids got her a jewelry box, but they hid the key for dramatic effect because they saw it in a movie. Fernando got her a giant painting of himself (okay?). Matt gets her a set of tennis rackets, which she seems underwhelmed by. However, the best nostalgia gag of the whole season so far is ex-boyfriend Steve's gift of an actual pillow person, as seen in DJ's childhood bedroom. Unbelievably perfect. She thinks so too, and is nearly moved to tears while her current boyfriend scowls. 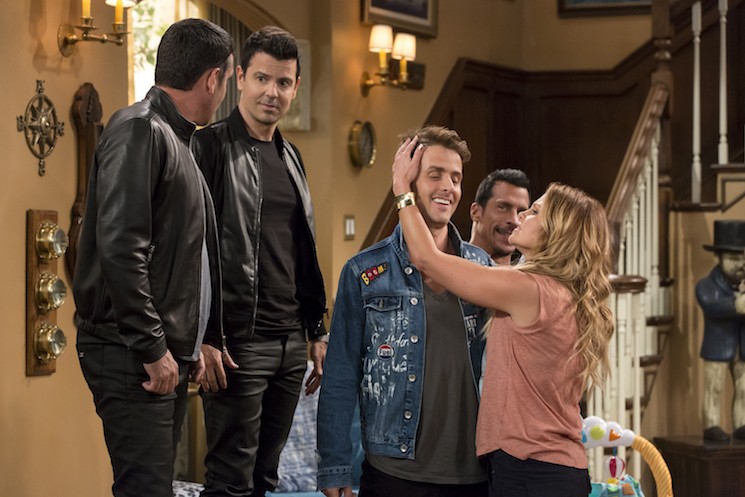 DJ's pain medication from the dentist was clearly "The Right Stuff."
Michael Yarish / Neflix
The doorbell rings, and Kimmy and Stephanie rush to grab it, knowing what awaits behind the door. DJ sticks behind and takes a bit of her carrot cupcake, and bites down hard on the key to the jewelry box that was hidden inside. The surprise is quickly squelched by the fact that she cracked her crown on it. Panicked, she and Matt make an emergency run to the dentist.

Kimmy and Steph holler for the clan to come out to the living room, where New Kids on the Block are waiting. Ramona has a massive reaction (for a 13-year-old born in 2003) and they understandably assume she's the birthday girl. Kimmy stops them and asks where DJ is. Steve tells them she's left and the New Kids start to leave. She begs them to stay, going so far as to block the door and order "new kids on the couch - now!"

They're held hostage by Max, who's playing the one song he knows on the trumpet. One saving grace is that they recognize Tommy and Cosmo from the "viral" video Steph put out and fangirl all over them. They almost walk out the door when DJ walks in, completely drugged up from her dental work. She totally misses the band standing there, and when Steph points them out, she tells them that the show is tonight and they should totally come, too. After petting Joey for a while, she slinks over to the couch and starts to pass out, while the guys fulfill their obligation and sing "Happy Birthday" to her with Donnie on FaceTime. Soon after, DJ is down for the count. 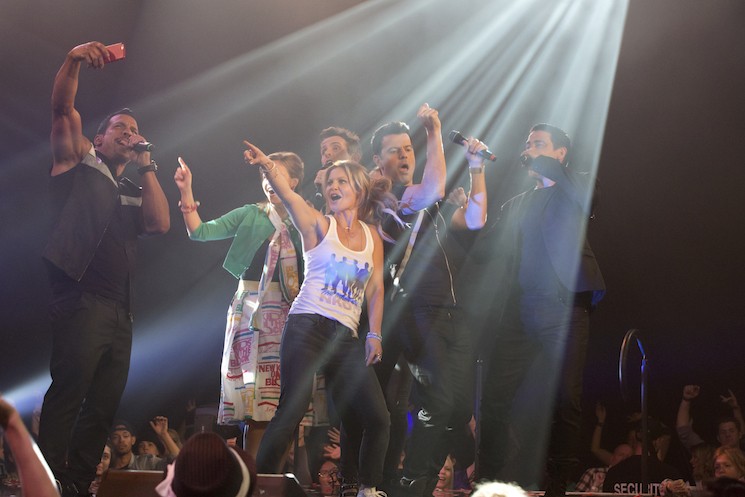 Pics or it didn't happen.
Michael Yarish / Neflix
DJ wakes up from her nap a few hours later and starts telling Steph and Kimmy about the "dream" she had where New Kids on the Block came to the house. Stephanie solemnly shows her the video of her petting Joey, proving that it really happened. They then break the news that the reason they did all that was because they can't go to the show after all.

Even more devastating: Fernando ate the last carrot cupcake, because he's Fernando and he's the worst.

Steve bursts in excitedly, telling them that Matt was able to score them tickets to the show. In the midst of their screaming, Matt walks in and the girls tackle him. He seems confused, and Steve fills in that "Matt's friend" is the owner of the venue and hooked them up. After the girls leave to get ready, Steve tells him that the venue owner is actually his podiatry client. He just wanted to set up a "win" for Matt after his tennis racket fail. Seems like a weird power move, but Matt is grateful and he and Steve are bros now, so we're okay with it.

Next we find the girls at the arena, front row like they planned all along. The guys notice the "stoner chick" (DJ) in the crowd and invite her on stage (as long as she doesn't fall asleep.) They sit her down on a stool and sing "Please Don't Go, Girl" to her as everyone watches. We'd also like to point out that she's in a tank top, and it's supposed to be December, and nothing makes sense. She thanks her best friends Kimmy and Stephanie and invites them onto the stage, where they sing "The Right Stuff" with the band while FaceTiming with her kids. She's not a regular Mom, she's a cool Mom.