Here's Your Guide to Canal Convergence 2020 in Scottsdale This Month

Light-based installations include Hidden Garden by Koros Design. Koros Design
Canal Convergence returns this month, with a mix of in-person and virtual experiences designed to highlight the intersection of water, art, and light. It’s traditionally been anchored by art installations and events centered around the Scottsdale Waterfront, but this year’s lineup will look a bit different.

Scottsdale Public Art has made an effort to reduce crowd sizes and reflect the new realities of social distancing. Here’s a look at what to expect during Canal Convergence, which runs from Friday, November 6, to Sunday, November 15.

Location: Large-scale artworks will be installed throughout Old Town, rather than concentrated along the Arizona Canal and the Scottsdale Waterfront. Additional experiences will be available through streaming platforms and an augmented reality application developed for Canal Convergence 2020. Watch for QR codes on signs and ground stickers near various artworks. 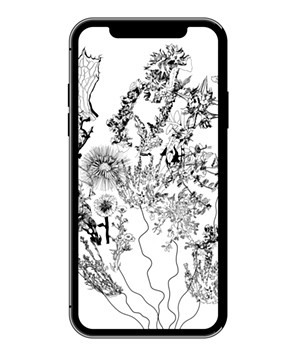 Hours: The lineup begins at 5 p.m. each day, and continues through 9 p.m. on Sundays and weekdays. On Fridays and Saturdays, happenings run through 10 p.m.

Plan Ahead: For some artist workshops, you’ll need to order supplies from Canal Convergence a week in advance. Check workshop offerings early, so you’ll have enough time to get what you need. Also, some events are selling out quickly, which means you might miss out if you wait too long to buy a ticket or make a reservation.

Cost: Most Canal Convergence offerings are free, but there are some exceptions. Bring money for food and drinks if you want to explore local eateries around Old Town, and don’t forget about money for buying local art, souvenirs, or holiday gifts.

Art Installations: Canal Convergence features several light-based artworks, which you can find using the online map. Seven of these temporary works of art have an augmented reality elements. Keep an eye out for other public artworks located in and around Old Town, which range from Ed Mell’s Jack Knife to John Randall Nelson’s One-Eyed Jack. Some have augmented reality components you can access during Canal Convergence. 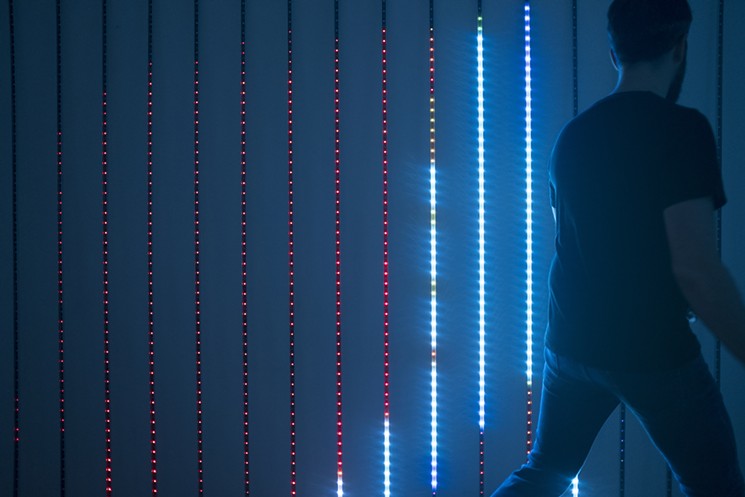 Fences by Emerge Interactive
West Side of the Arizona Canal

Philadelphia studio Emerge Interactive created this interactive light installation that responds to the motion of foot traffic. Look for the 72-foot-long artwork on the west side of the Arizona Canal between Goldwater Boulevard and the Marshall Way Bridge.

This installation, which was inspired by the prevalence of digital communications amid pandemic life, will be on view through December 31. The installation spanning over 200 feet across the Arizona Canal responds to pressure at six nearby pads, creating an interactive light sculpture. You’ll find it on the east side of the Arizona Canal between the Marshall Way Bridge and the Soleri Bridge/Scottsdale Road. During an online workshop, participants can create watercolor designs and learn how to illuminate them.

Across the Divide by Casey Farina
Scottsdale Fashion Square Budapest-based Koros Design combined textiles, LEDs, and pulsed motion to create four inflatable light sculptures inspired by plant life. The artists will lead a virtual tour of their studio, and invite people to make their own kaleidoscopes. The California-based creatives culled a shape from sacred geometry to create a light-based sculpture meant to honor mathematical and scientific discoveries. The title of this piece, which includes 10,000 LED lights, references a Mesoamerican serpent deity.

Created by an interdisciplinary artist collective based in Boston, this installation features sound and art projections. The projections will be presented at outside locations at Western Spirit: Scottsdale’s Museum of the West, Scottsdale Center for the Performing Arts, and SouthBridge buildings. The artists created an app you can use to create your own composition with audio and sound elements they captured around Old Town, and you can submit your composition to the artists if you'd like your work to be folded into the installation. This 12-foot-high light sculpture was created by an Israel-based interdisciplinary studio, which took inspiration from health care workers and families affected by COVID-19. The artists created an accompanying website, which you can use it to upload your own “messages of love, hope, care, and thanks.” The messages will become part of an augmented reality component for this artwork. Experience this kinetic sculpture, which is best viewed under an open sky, by downloading the Hoverly app. You’ll be able to unlock the artwork from home or using QR codes that will be placed around Old Town. The artwork includes a soundscape rooted in gamelan bells.

The Phoenix-based artist used line drawings that reference organic matter observed in an Old Town alleyway to create artwork meant to heighten awareness about the complexity of urban environments. 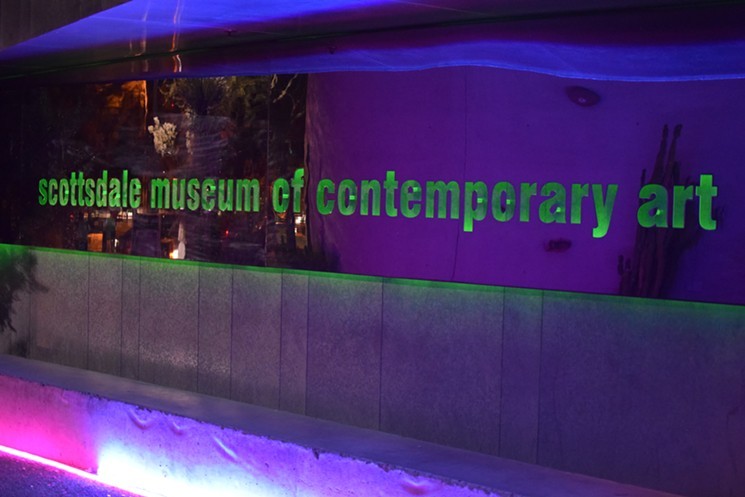 Scottsdale Center for the Performing Arts is presenting two live, ticketed performances in conjunction with Canal Convergence, including Life Filled With (Stevie) Wonder on Friday, November 13, and With a Song in My Heart, a Tribute to Doris Day on Sunday, November 15.

Canal Convergence is scheduled for Friday, November 6, through Sunday, November 15. Most events are free but some require an RSVP or ticket. Visit canalconvergence.com.
KEEP PHOENIX NEW TIMES FREE... Since we started Phoenix New Times, it has been defined as the free, independent voice of Phoenix, and we'd like to keep it that way. With local media under siege, it's more important than ever for us to rally support behind funding our local journalism. You can help by participating in our "I Support" program, allowing us to keep offering readers access to our incisive coverage of local news, food and culture with no paywalls.
Make a one-time donation today for as little as $1.