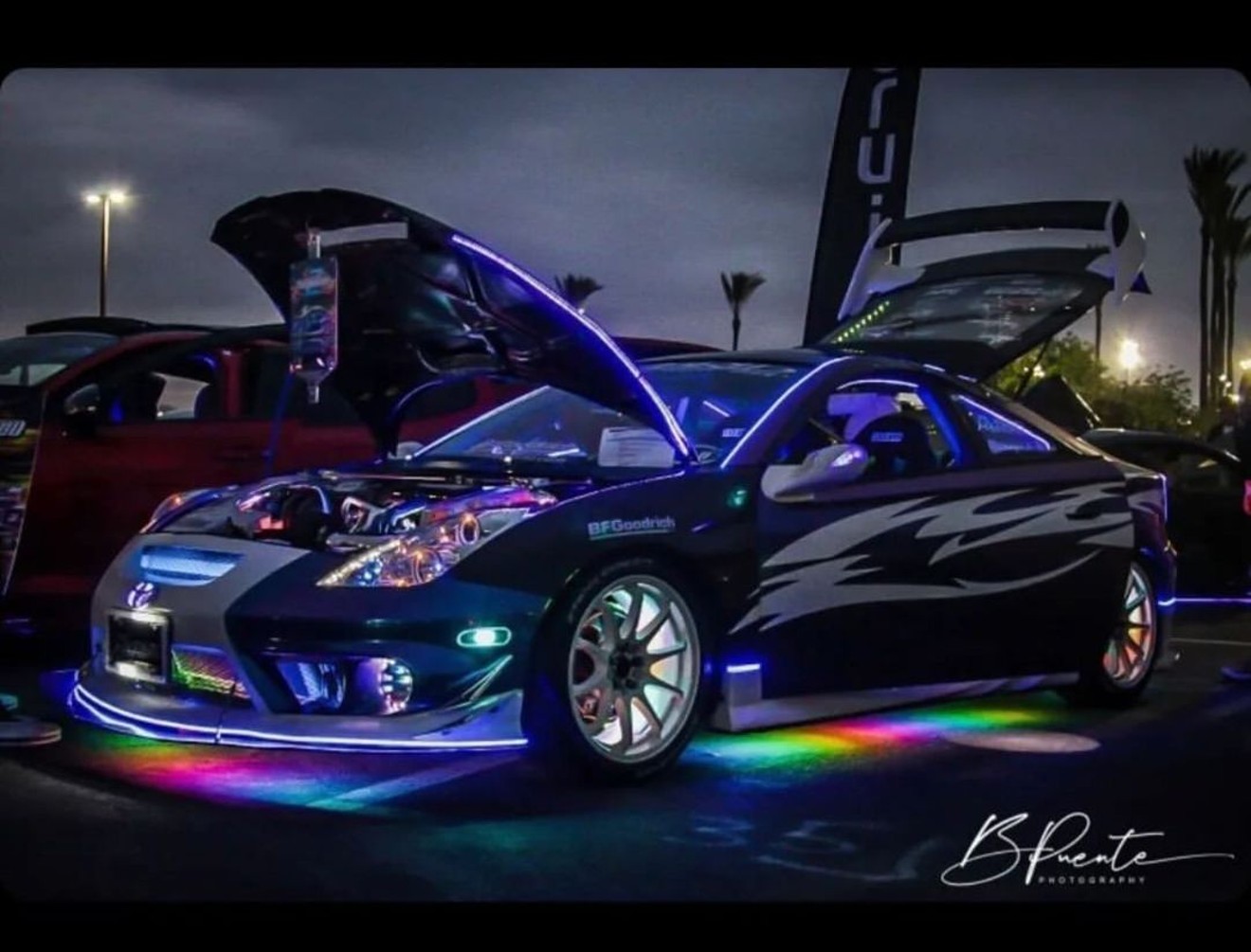 Joseph Warasky's Toyota Celica will be in Scottsdale on Saturday, August 20. Courtesy of Steffie Lauren/@bpuentephoto

Suppose you've rubbernecked at a caravan of vehicles glowing with neon undercarriage lights around town. The drivers are likely prepping to roll to Scottsdale to connect with other import and domestic car enthusiasts.

HIN is a nighttime shindig revolving around an import car show, race-queen-styled models, and bass-bountiful electronic and hip-hop music played by DJs.

Since its California inception 25 years ago, the lifestyle show has added domestic and Euro classes into the officially judged car show. In addition, other lifestyles — including anime, sneaker and fashion collecting, and slot car, RC, and drone racing — crossed over into HIN's itinerary throughout the years.

Besides major U.S. cities, HIN tours in Asia, the Middle East, South America, and Europe; the ginormous "nightclub packed with the coolest rides vibe" is still relevant with the post-millennial sect — especially in metro Phoenix.

Steffie Lauren was Miss Hot Import Nights Phoenix in 2019-20.
Courtesy of Steffie Lauren
This Saturday, the WestWorld of Scottsdale venue will shut off the lights in certain areas. Select vehicles with ornate neon and LED installations will flash intermittently with their sound systems and illuminate the venue.

At previous Hot Import Nights, folks would enter the show decked in neon-colored glow-in-the-dark body and face paint; others kept it old school, busting out their parents' early 2000 LED lights and dollar store-purchased glow sticks. The event is kid-friendly.

HIN is also an annual Valley get-together where Gen X and millennial import tuners from back in the heydays can bond with the younger folks in a takeover-safe environment.

Mesa car builder Steffie Lauren was a toddler when the inaugural HIN dropped in 1997 in northern California. She vaguely remembers The Fast and the Furious 2001 movie, which displayed the HIN-esque lifestyle for the whole world to see. "I was little, but the movie is one thing that made me fall in love with cars," Lauren says. "It was definitely the Nissan Skyline GT-R; I want to own one one day."

Lauren, who requested Phoenix New Times to use her model name, was referring to the yellow-colored R33 Nissan Skyline GT-R driven by Leon, The Fast and the Furious movie character who rolled with the street racer crew for Dominic Toretto (played by Vin Diesel). In the cult classic, Leon yelled the classic line to the pizza delivery driver, "street's closed pizza boy, find another way home" as he sat inside his R33. At Scottsdale this weekend, right-hand-drive Nissan Skylines equipped with mind-blowing turbochargers and nitrous oxide will be showing out at HIN, assures Lauren.

In 2019-20, Lauren was Miss Hot Import Nights Phoenix. Her images were plastered on HIN ads and social media — some with her show car: a red-colored 2016 Mercedes-Benz. This weekend, it'll be featured in its new colorway: bright pink.

"It's a one-of-one custom made by CMST wide body," she explains. "The front is over 6 inches wider on each side, and the back is 12 inches wider. The entire car is female-built and female-driven."

Steffie Lauren's 2016 Mercedes-Benz will rep at the Hot Import Nights show in Scottsdale.
Courtesy of Steffie Lauren
The 27-year-old Mesa car builder extended the body lines to accommodate the black-colored 19-inch Rohana Wheels, especially when she decompressed the air suspension, laying the German-luxury vehicle onto the ground.

As the sun goes down, Lauren will be ready and illuminate her parking spot with neon lights adorning the exterior, interior, and engine bay. Her 20 or so teammates from Team Hybrid will park next to her. "The other ones in our team who have great lighting are Tron [Joseph Warasky] and Mike Klenofsky," she says. Warasky drives a heavily modified Toyota Celica, which illuminates like the cycles portrayed in the TRON movies. Klenofsky's Dodge Charger, accented with orange flame graphics, has vertical doors that open up like a Lamborghini.

Crews and solo riders from the Valley and other states are rolling in to attend or compete. In addition, there will be vendors, beverages, and concession stands.

Doors open at 3 p.m. Saturday, and Hot Import Nights will go until 11 p.m.

WestWorld of Scottsdale
16601 North Pima Road,  Scottsdale
Tickets: $10 for children 7-12 (under 7 free with paid adult); $15-$20 for adults.
KEEP PHOENIX NEW TIMES FREE... Since we started Phoenix New Times, it has been defined as the free, independent voice of Phoenix, and we'd like to keep it that way. With local media under siege, it's more important than ever for us to rally support behind funding our local journalism. You can help by participating in our "I Support" program, allowing us to keep offering readers access to our incisive coverage of local news, food and culture with no paywalls.
Make a one-time donation today for as little as $1.