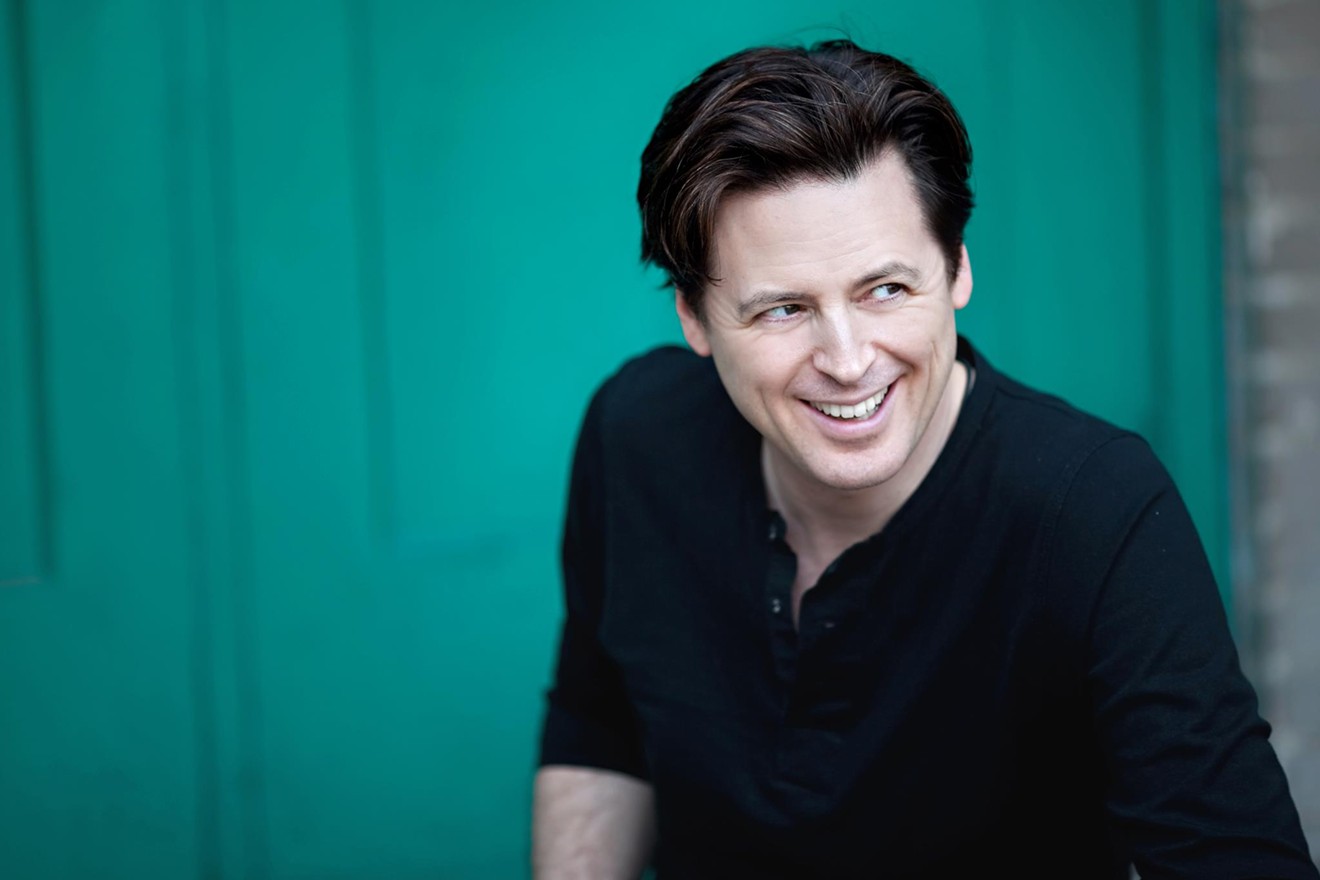 A satiric blend of radio talk show, stand-up, and panel discussion, the newest version of the show responds to the current state of politics. It comes to downtown Phoenix's Herberger Theater Center on Saturday, May 6.

The son of a former Franciscan nun and monk and a supporter of gay marriage and marijuana legalization, Fugelsang regularly challenges his listeners to think about more complex topics on his radio show Tell Me Everything. On the call-in show, broadcast daily on SirusXM Inisight, the comedian and his listeners discuss pop culture, religion, and politics.

Along with his radio career, Fugelsang also does stand-up, directs, and acts in TV and film. He has appeared onscreen in America’s Funniest Home Videos, Coyote Ugly, Price Check, Providence, and Becker.

Recently, Fugelsang starred in the film Dream On, directed by Roger Weisberg. It's a deeper exploration of the American dream in today’s society — and won Best Documentary at the NYC Independent Film Festival.

Fugelsang took some time between being on the air and touring to talk with New Times about the show.

Comedians Frances Callier and Angela V. Shelton make up the comedy duo Frangela.
WYD Media Management
New Times: What makes the Resistance Tour different from other tours you’ve done with Stephanie Miller?
John Fugelsang: This tour launched a few years ago, and it’s always been under the presidency of Barack Obama. So, it was always a tour that wasn’t opposing the president, per se. But now the tour has changed because everything has changed ... For me, it was important to go back on the road and do this again, because we wanted not just to entertain people and make fun of the new administration but also because I’ve really found that so many Americans really need a sense of community right now and a sense that they aren’t the only sane people in their community … The attraction is getting to be able to be in a room, having a lot of fun, laughing really hard at this comedy that manages to be both moral and dirty at the same time.

Usually you wouldn’t think of those two things going together.
Exactly right, but it’s within the service of freedom, democracy, tolerance, compassion, and love. In that sense, we have the perfect blend of dirty jokes and positive values.

I know the show has always had a political slant, but did you feel you had to take it up a notch for
this tour?
I think so. People have gone through all the Kubler-Ross stages of loss after the election. They’ve gone through shock and bargaining and through denial, and I think a lot of people are now at the anger phase…These people come to the show because of morality. This is a tour that feels that on every level, patriotism, economic sensibility, Christian values, we’ve abandoned all of those with this particular election. It’s always been a political tour, but now, it’s certainly more fiery. Now, the stakes are higher for all of us and for people who care about the less fortunate, for people who care about civil rights, for people who care about the state of our economy.

I heard in the show, you all do your own sets and then come together. How does that work?
The show is a hybrid of Stephanie’s radio show and a stand-up show. So, Stephanie welcomes the crowd, and she talks about the headlines of the week. I do my act, and Frangela does their act … We have a panel where we’re all together. Sometimes, we have an audience Q&A, and sometimes we welcome guests on stage. We’ve had everyone from Rob Reiner to Lily Tomlin to different congressmen and journalists who’ve joined us. It’s part town hall meeting, part edgy nightclub act, and equal parts intelligence, irreverence, patriotism, and dirty jokes.

That’s a lot for one show.
I talk a lot about Christianity too. We try to cover as many areas as we can. Frangela speak beautifully about race, being a woman in the society, and class and economic issues. Stephanie is just a great, great broadcaster with such a loyal following. She takes no prisoners when she goes off on the right-wing people in power. For me, I try to keep it as fun and positive as I can while going after the right targets.

With doing political comedy, do you try bring in new topics all the time to your act?
You know going into political stand-up that there’s a risk of alienating half of your potential audience, and you know there’s a risk of your material being dated in two weeks. My favorite comedians have been the ones who’ve helped me to make sense of what’s going on in a crazy world, the people who speak truth to power and the people who manage to take on what’s going on in the world by being funny rather than being preachy.

Stephanie Miller discusses politics and current events during her morning radio talk show.
WYD Media Management
Who are some of your favorite political comedians?
George Carlin, Bill Hicks, Lewis Black, who does my radio show all the time …The first time I saw George Carlin, he talked about political events, war, racism in ways that made me feel less alone. I realize that the greatest thing a performer can do is to make an audience member feel that they are not crazy and that someone understands their feelings. That’s been very fun for me. That’s the most rewarding part about doing this.

Politics, race, and religion seem like they would be the hardest topics to bring up before an audience, but it sounds like your crowds have been receptive.
When I talk about religion, I’m very pro-Jesus and pro-God. I go after hypocrisy. It’s like doing political humor. You’re not taking on America or the Constitution. You’re taking on liars, con men, and hypocrites.

All of you on the tour have very different backgrounds. It must be interesting when you all come together.
We all approach it from different ways, the way we all approach comedy or politics in different ways. We’ve done the tour in the past with Hal Sparks, Carlos Alazraqui, Aisha Tyler. So now, having Frangela in the
third spot has been a lot of fun. These women just bring down the house and are really inspiring to watch. There’s not a lot of great comedy duos anymore, and certainly not a lot of African-American, female comedy duos anymore.

What’s it like to be the only guy in the mix?
I forget about it sometimes. It’s great now that I can do a show where I can strike out with all three members of my touring group … It’s an honor to be the one guy around these smart, funny, dynamic, creative women.

Stephanie Miller's Sexy Liberal Resistance Tour will visit Phoenix on Saturday, May 6 at 8 p.m. at the Herberger Theater Center, 222 East Monroe Street. Tickets range from $53.50 to $153.50 at herbergertheater.org. Find out more at sexyliberal.com.

KEEP PHOENIX NEW TIMES FREE... Since we started Phoenix New Times, it has been defined as the free, independent voice of Phoenix, and we'd like to keep it that way. With local media under siege, it's more important than ever for us to rally support behind funding our local journalism. You can help by participating in our "I Support" program, allowing us to keep offering readers access to our incisive coverage of local news, food and culture with no paywalls.
Make a one-time donation today for as little as $1.
Laura Latzko