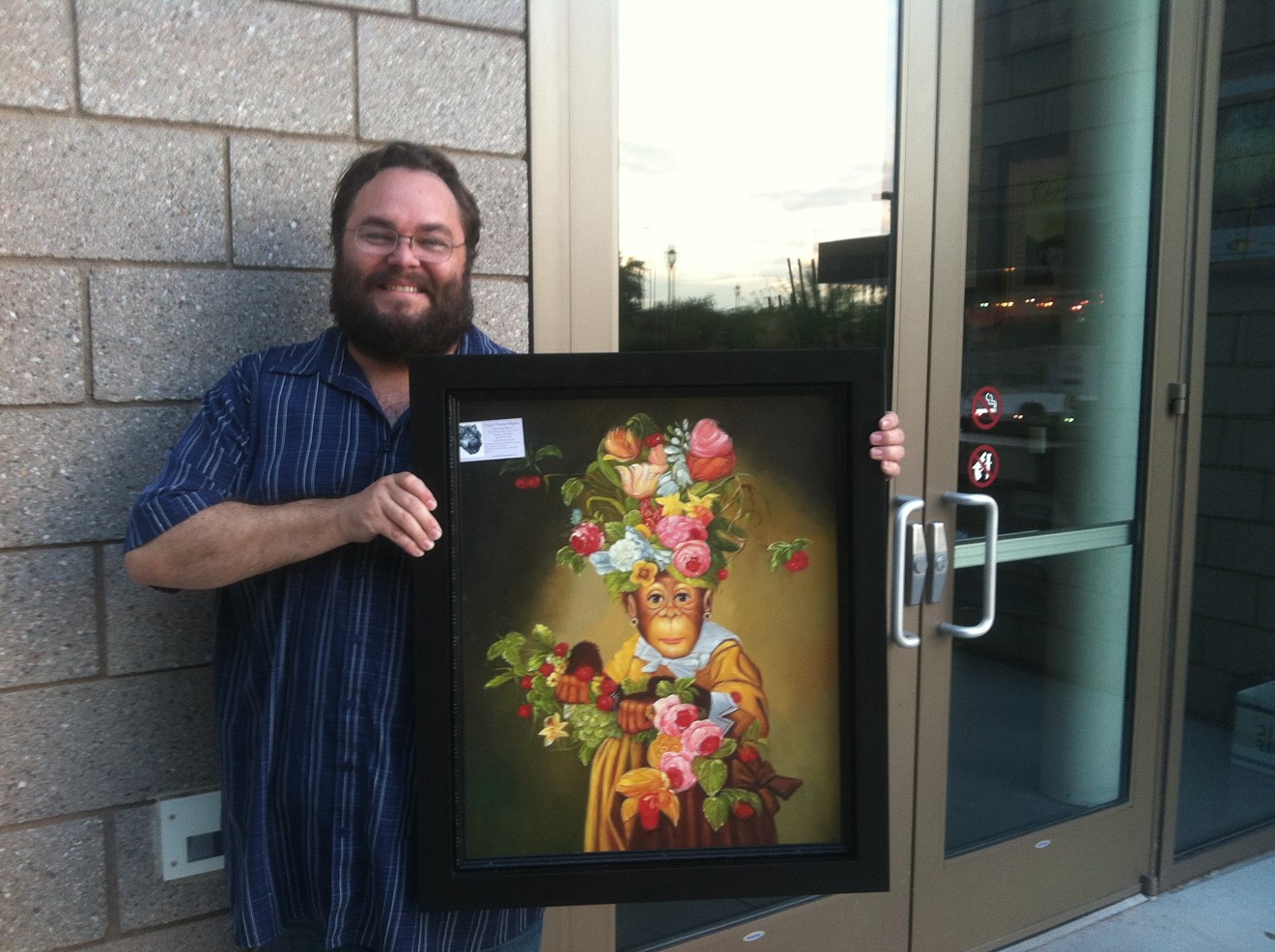 Kerry Lengel with artwork by Donald Roller Wilson for a 2015 silent auction in Peoria. P.F. Lengel
Kerry Lengel sat at a small cafe table inside a Tempe coffee shop recently, sipping a hot caffe breve while talking about his journalism career, which has spanned more than two decades. His dark brown eyes welled up with tears at times as he reflected on changes in both his personal and professional life.

Lengel’s last day at the Arizona Republic was Friday, January 3. He won’t say whether he took a buyout, but says it's common knowledge that buyouts have been happening amid recent changes at the newspaper. Employees voted to unionize in October, and parent company Gannett merged with GateHouse Media in November.

Lengel is best known for his theater reviews, although he’s covered a broad swath of performing and visual arts. He started as a copy editor for the Phoenix Gazette, which merged with the Republic in 1995. In 1999, his job title changed to reporter. But he also spent several years in editor mode.

In 2005, he started doing general arts reporting. “My first art story was about 3-Car Pile Up,” he recalls. That’s the art collective that launched the “Chaos Theory” exhibit that’s still a staple of the downtown arts scene.

“My first theater review was Thoroughly Modern Millie at ASU Gammage,” Lengel says. “I was far from being an expert in musical theater, but I became the official theater guy when Kyle Lawson retired in 2008.”

Lengel wrote fewer theater reviews in recent years as reader interest seemed to wane. “It’s so hard to get traction for art stories, especially as metrics have become more and more important during the last five years,” he says.

He’s faced other challenges, as well. “It was tough from 2016 to 2018,” Lengel says. “I had two unrelated cancers, which changes your perspective on mortality.”

Meanwhile, the Republic's newsroom was shrinking. “There was a lot of turnover, and we went through a lot of managers,” he says. “A year ago, we were expecting another big round of layoffs.”

At that point, Lengel wondered about his future with the newspaper. “I knew my numbers weren’t good, and I wasn’t really engaged at work,” he says. “I was ready to go.”

Lengel escaped those layoffs. But he wasn’t happy about it. “I was disappointed I didn’t go,” he recalls. “I had been ready to figure out what was next.”

Instead, he left the paper early this year. "I got to leave at the time of my own choosing," Lengel says.

Now, he’s devoting a year to exploring various projects, including writing a novel. And he’s eager to get more involved in civic life, from volunteering to participating in political activism. "The things that really matter to me are criminal justice reform and immigrant rights," he says.

He's eager to work on a family history writing project as well. Lengel was raised a Mormon but formally left the church after his mother died in 2010. "I may do a Mormonism and masculinity memoir," he says.

Odds are, leaving the daily grind of deadlines will take some getting used to. “I’ve always believed that I needed the structure of the job and the deadline,” he says. “I’m actively discovering ways of being productive without those structures.”

“It’s scary as hell,” Lengel says. “But it’s freeing."
KEEP PHOENIX NEW TIMES FREE... Since we started Phoenix New Times, it has been defined as the free, independent voice of Phoenix, and we'd like to keep it that way. With local media under siege, it's more important than ever for us to rally support behind funding our local journalism. You can help by participating in our "I Support" program, allowing us to keep offering readers access to our incisive coverage of local news, food and culture with no paywalls.
Make a one-time donation today for as little as $1.