Even in a year when theater and museums were closed for months on end, there was still much to cover in the metro Phoenix arts and culture scene. Here are the 10 stories that got the most attention, in ascending order.

The Fortoul Brothers, Gabriel and Isaac, are a nationally recognized artist duo as well as two of the most popular artists in Phoenix. That is, until multiple women came forward with sexual misconduct allegations against Isaac Fortoul. What followed was the fall of a pair of artists on the rise, including murals covered over and public art contracts lost.

The David and Gladys Wright House got new owners this year.
Alison King


9. What a Recent Sale Means for a Frank Lloyd Wright-Designed House in Phoenix

The David and Gladys Wright House sold in August after a long time on the market. The new owners paid $7.25 million for the home Frank Lloyd Wright designed for his son and daughter-in-law. The owners plan to use it as a private home rather than a cultural center, which is kind of a bummer, but at least we know this architectural gem will be protected in the future.

This tribute to essential workers was painted by Robert Gentile and El Spawk at Grand ArtHaus.
Lynn Trimble


8. New Murals by Phoenix Artists Bring Color and Life to the City

Museums were closed for most of the year, but metro Phoenix didn't lack for new art. Murals all around town addressed politics, the Black Lives Matter movement, and other issues of the day, plus they added vibrancy and visual interest to the Valley during the pandemic doldrums.

Our annual guide to home Christmas displays is usually one of the most popular stories of the year, and the 2020 installment was no exception. We rounded up the most impressive private displays from every corner of metro Phoenix. We recommend you throw some hot chocolate in a Thermos, hop in the car, and start exploring.

Metrocenter was a ghost town well before it officially closed, as this 2019 photo shows.
Annstracts.com


6. The End of Metrocenter Is More Than Just the Closing of a Phoenix Mall

When west Valley shopping mall Metrocenter closed at the end of June, it was the end of an era. This cover story delved into the history of the mall and memories from generations of Phoenicians who hung out there, and reported from one of the "cruise the mall" events that took place during Metro's final days.

A supermoon in 2012 seen from southern Arizona.
Ken Bosma/CC BY 2.0/Flickr Creative Commons

With everything closed down this year, there wasn't much to do besides stare at the sky, which is probably why so many of you clicked on our astronomy stories. These handy guides helped amateur skywatchers decipher what they were seeing in the heavens above. 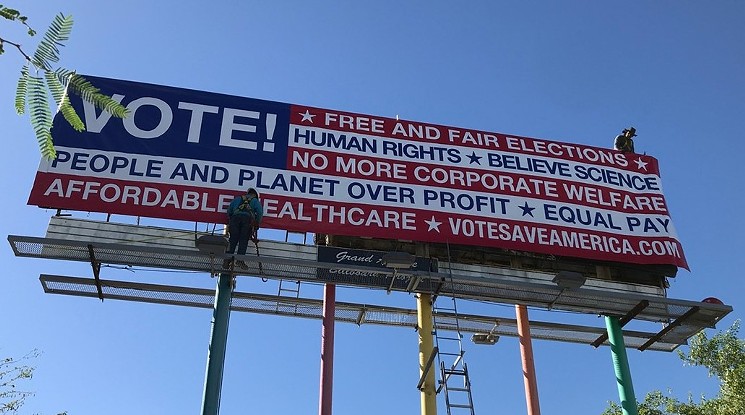 
4. Trumpocalypse Billboard Gets Fresh Design on Grand Avenue in Phoenix

The Trumpocalypse billboard, with its mushroom clouds and swastika-like dollar signs, had become a familiar sight on Grand Avenue. But in June, artist Karen Fiorito switched out the president's mug for an election-themed design. In honor of the Black Lives Matter movement and the summer protests, she also redid the back of the billboard to show the faces of Black men and women who had been killed by police. Now that the election is over, a new design is reportedly in the works.


3. How a Phoenix Podcast Host Used TikTok to Advocate for Her Missing Sister

Sarah Turney never gave up trying to find out what happened to her sister, Alissa, a Paradise Valley High School student who disappeared in 2001. After a website, billboards, and a podcast, Sarah finally turned to TikTok to generate interest in Alissa's case, where she racked up millions of views. But the biggest break came in August, when a grand jury indicted the girls' father, Michael Turney, on one count of second-degree murder in the death of Alissa.

Plenty of people watched movies at WestWorld of Scottsdale in the spring and summer.
Steve LeVine Entertainment


2. Drive-In Theaters Have Popped Up Across Metro Phoenix — Here's Where They Are

In January, no one would have put money on drive-in movie theaters seeing a huge resurgence this year. But when COVID-19 closed cinemas and kept people cooped up in their houses, the retro form of entertainment was suddenly one of the best ways to be safe and have fun at the same time. This piece listed all the options around town to catch a drive-in flick.

Phoenix had its hottest day ever on June 26, 1990, when the mercury hit 122 degrees.
maliciousmonkey/CC BY-SA 2.0/Flickr


1. The Hottest Day Ever in Phoenix: An Oral History

On June 26, 1990, the temperature in Phoenix hit 122 degrees. Naturally, anyone who was around on that day has plenty to say about our hottest day. This oral history collects memories from the people who remember the record-setting heat, including a local meteorologist who did a live segment from his studio's roof, a construction worker whose colleagues kept passing out, and a woman whose underwear melted.
KEEP PHOENIX NEW TIMES FREE... Since we started Phoenix New Times, it has been defined as the free, independent voice of Phoenix, and we'd like to keep it that way. With local media under siege, it's more important than ever for us to rally support behind funding our local journalism. You can help by participating in our "I Support" program, allowing us to keep offering readers access to our incisive coverage of local news, food and culture with no paywalls.
Make a one-time donation today for as little as $1.