Downtown Advocates Want Your Input on the Phoenix Arts Scene 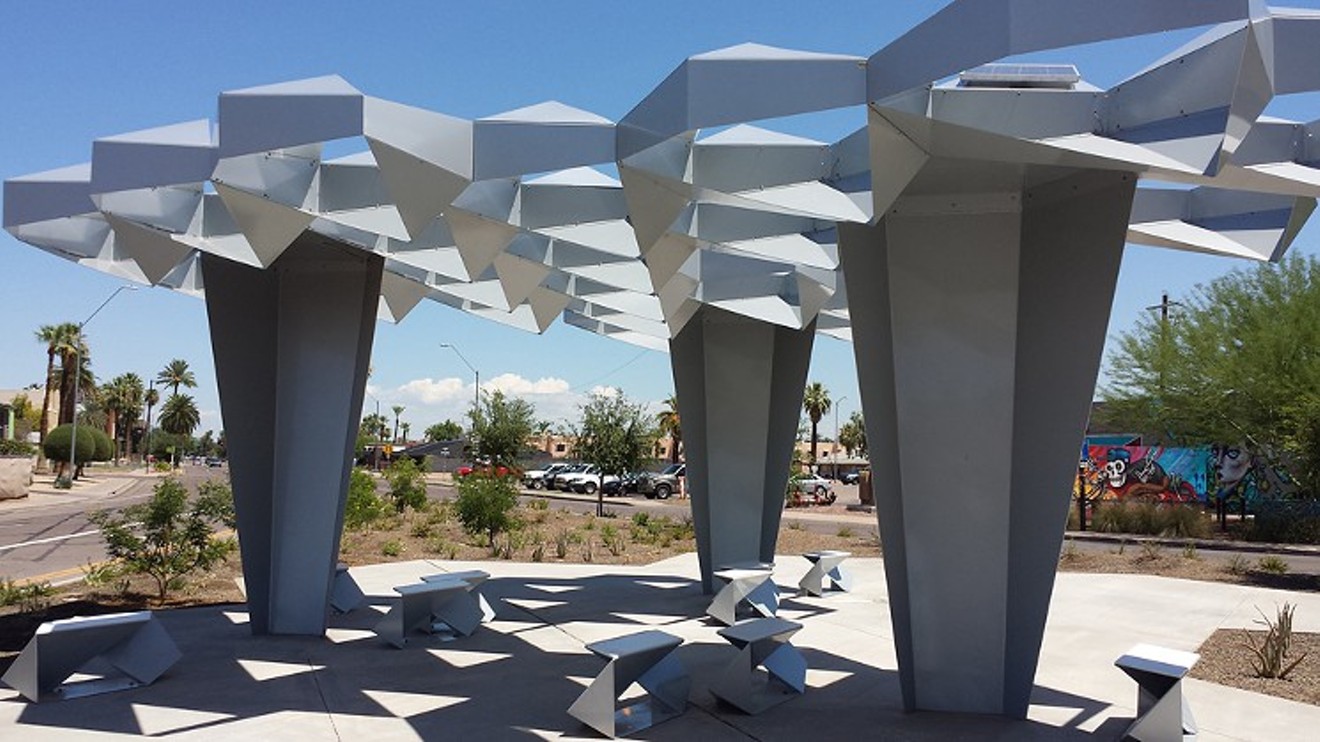 Part of Shadow Play shortly after it was installed in Roosevelt Row. Lynn Trimble
For several years now, the downtown arts scene has felt like a moving target, especially as new developments have displaced art spaces.

Downtown Voices Coalition (or DVC) is working to address the issue, starting with a survey inviting community input about downtown arts and culture.

The group comprises community members who care about diverse downtown issues such as arts and culture, affordable housing, the environment, historical preservation, and local businesses.

“We were formed mainly by artists,” says Jeff Sherman, who chairs the DVC steering committee.

The first Downtown Voices gathering was a symposium held at the Icehouse arts space in May 2004. More than 90 people attended, including creatives Cindy Dash, Annie Lopez, Kim Moody, and Beatrice Moore.

Today, the coalition holds monthly meetings to discuss plans and policies affecting downtown and surrounding neighborhoods. The meetings are open to the public, and often include topics related to arts and culture.

Recently, the coalition created a simple survey inviting community member input on arts and culture in and around downtown. It stems from their concern that the current development cycle is leaving artists in a lurch.

“When the construction part of this cycle ends, we’ll all be looking around at the arts community that’s been left to fend for itself,” Sherman says. “We need to get back to supporting artists, and making sure we’re proactive on arts and culture issues.” Sky Black's mural at monOrchid addressing rampant development and the shifting urban landscape.
Lynn Trimble
The survey asks people to share the top three issues facing the downtown arts scene. It’s been sent to several community leaders, but DVC wants others to participate as well. “We want to get as many responses and as much diverse input as we can,” Sherman says.

They’ve received several responses to date, with concerns that cluster around three issues, including a lack of high-end art buyers, the limited number of well-known art galleries, and affordability.

“The affordability question is on everyone’s mind, which impacts artists and other downtown residents, but also gallery spaces,” Sherman says. “We’re slowly seeing more and more galleries and other artistic spaces taken out of downtown.”

For Sherman, they converge at a single issue: whether or not artists can make a living doing art in downtown Phoenix. “Development and the arts are so very related,” he says.

[image-4] What the coalition ultimately decides to tackle will depend on how the survey results shake out. People who want to weigh in can find the survey online. It’s likely the coalition will discuss preliminary findings at its next meeting, which happens on Saturday, September 8. So don’t delay if you want your input to be part of the mix.

It’s possible the coalition will form a subcommittee to explore arts-related ideas and needs, then formulate recommendations about what the group should be advocating for. Looking at best practices in other cities could be part of that effort, Sherman says.

For now, they’re focused on getting the survey to as many people as possible. “We want to represent as many voices as we can.”
KEEP PHOENIX NEW TIMES FREE... Since we started Phoenix New Times, it has been defined as the free, independent voice of Phoenix, and we'd like to keep it that way. With local media under siege, it's more important than ever for us to rally support behind funding our local journalism. You can help by participating in our "I Support" program, allowing us to keep offering readers access to our incisive coverage of local news, food and culture with no paywalls.
Make a one-time donation today for as little as $1.