20 Best Things to Do in Metro Phoenix This Week Explore an exhibit of LGBT issues at the library. Holly Shoemaker
Busy season is here, Phoenix. And this week? The Valley's to be seriously busy — and super crowded, too. That's because the NCAA's Final Four is coming to town, and bringing with it thousands of basketball fans. Now, the chances of you getting budget-friendly tickets to one of the games are slim, but there's plenty more to do this week. Here's a look at the best events — from Phoenix Pride and the Final Four fan fest to a Johnny Cash musical and a debut performance by a MacArthur Genius. For more, see New Times' curated calendar.

"LGBTQ: Rights & Justice"
Happy holidays. Yes, Phoenix Pride is a special time of year, and even the flagship branch of the Phoenix library system is joining in on the festivities. “LGBTQ: Rights & Justice” is an all-media art exhibit intended to showcase “the struggle that the LGBTQ community has had to endure to gain justice denied.”

“LGBTQ: Rights & Justice” is an Alwun House Foundation exhibit housed at Burton Barr Central Library, 1221 North Central Avenue, in the North Gallery. This free exhibit will be on display starting Monday, March 27, when hours will be 9 a.m. to 5 p.m. Other features include displays from the Bj Bud Memorial Archives and a screening of Upstairs Inferno until the last day on April 22. Call 602-262-4636, or see the Alwun House website. Lauren Cusimano 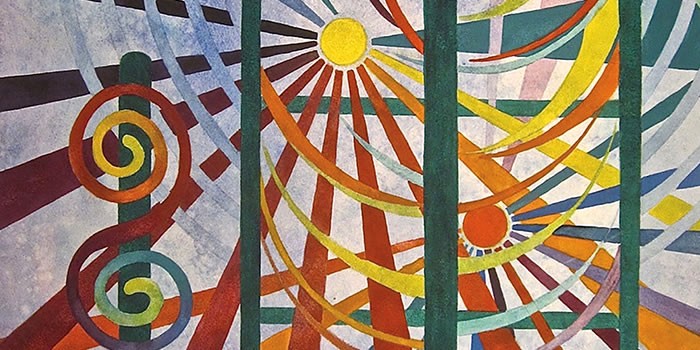 Dive into art with watercolor works at Vision Gallery in Chandler.
Photo courtesy of Vision Gallery
13th
The world is massive, right? Did you know that 25 percent of the world’s incarcerated population is incarcerated right here in the United States?

That is one of the startling facts explored in 13th by Ava DuVernay, who also directed the critically-acclaimed Selma. The Oscar-nominated documentary takes an intense and critical look at how race, justice, and mass incarceration intersect. DuVernay explores ways that slavery has been perpetuated in this country since the end of the Civil War. The movie also scrutinizes privatized prisons and the related corruption the prison-industrial complex has spawned. A panel discussion follows this informative film, screening at 6 p.m. on Tuesday, March 28, at Changing Hands Bookstore, 300 West Camelback Road. Admission is free. Call 602-274-0067 or visit the Changing Hands website. Amy Young

See Mark Greenawalt transform the human body into a canvas at Lotus Contemporary Art.
Mark Greenawalt
"Waterworks"
Think all watercolor paintings are muted pastel-color takes on tired old landscapes? A group of Phoenix-area artists working in water-based media wants to change your mind on that. They’re called Watercolor Artists, and they’ve been around since 1993.

You can explore their work between 10 a.m. and 5 p.m. on Tuesday, March 28. Leave extra time, and you can stroll nearby streets to enjoy the city’s outdoor sculpture collection. Visit the Vision Gallery website. Lynn Trimble 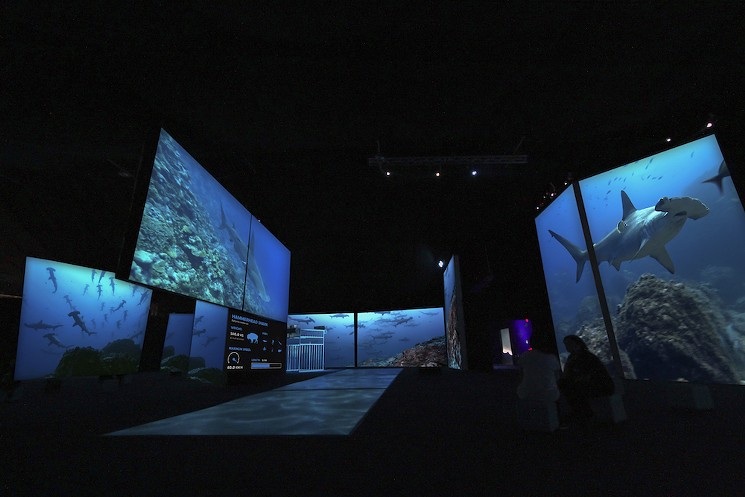 Take a bite out of science.
Courtesy of the Arizona Science Center
"Planet Shark"
Thanks to Jaws, Deep Blue Sea, and Sharknado, sharks have become the stuff of nightmares. But the exhibition “Planet Shark: Predator or Prey” offers a different perspective on sharks’ evolution and role in an ocean ecosystem through an immersive, multisensory experience. See models of hammerhead, great white, tiger, and thresher sharks; fossils dating back to 370 million years ago; a shark-cage activity; and information on shark conservation efforts. Hands-on puzzles and games add to the interactive and educational encounter with the elasmobranchs. The exhibit, which runs through Monday, May 29, is open from 10 a.m. to 5 p.m. daily at the Arizona Science Center, 600 East Washington Street. Cost of entry is $11.95 for adults and $9.95 for children, in addition to general admission tickets priced at $18 for adults and $13 for children ages 3 to 17. Call 602-716-2000 or visit Arizona Science Center's website. Laura Latzko It’s a can-al, not a can’t-al, on the Park of Four Waters Tour.
Courtesy of Pueblo Grande Museum
Ring of Fire
We’d enjoy 38 Johnny Cash hits however we can get ’em, even on a playlist streamed through the stereo of our unnamed hoopty. But it doesn’t have to come to that: The 2005 jukebox musical Ring of Fire is in town. The cast of 10, six of whom tear up guitar, mandolin, fiddle, drums, upright bass, keyboards, accordion, trumpet, and harmonica, embody not just Cash’s music, but the journey of a man who was both more caring and more flawed (not to mention more talented) than strictly necessary.

The score includes “I Walk the Line” and the title tune, as well as the sentimental favorites “Flushed Down the Bathroom of Your Heart” and “Egg Suckin’ Dog.” Arizona Theatre Company’s production runs through Sunday, April 16, at Herberger Theater Center, 222 East Monroe Street. Catch the 7:30 p.m. preview on Thursday, March 30. Tickets are $25 to $85 at Arizona Theatre Company's website or 602-256-6995. Julie Peterson Rendering for the set of Arizona Opera's Riders of the Purple Sage.
Arizona Opera
"Body Art"
You might do a double take the first time you see Mark Greenawalt’s artwork. That’s because his canvas is the human body. He’ll be live painting from 6 to 9 p.m. on Thursday, March 30, at Lotus Contemporary Art, 7077 Main Street. The gallery relocated to Scottsdale last year after losing its Roosevelt Row art space to development.

While you’re there, check out paintings by gallery owner Denise Fleisch and sculptures by Scott Woodward. Then hit more galleries for Scottsdale Art Walk, before you head home to dig out those old paintbrushes with the special living canvas in your life. Visit Denise Fleisch's website. Lynn Trimble 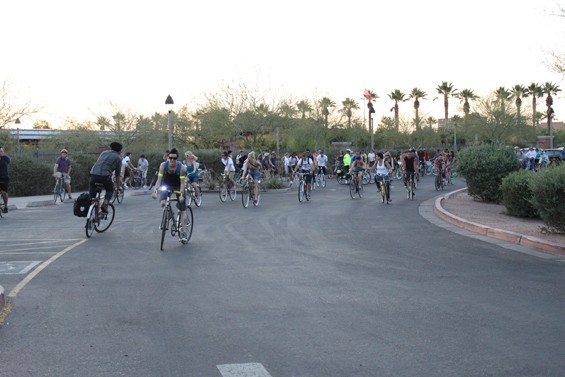 Ride on.
David Robles
American Opera Lecture
The American Opera Lecture Series at Arizona Opera reaches its conclusion as Josh Borths, director of education and community engagement for the company, discusses the rise of opera on this side of the Atlantic in the 21st century. This ear-opening event will use rare music and video to demonstrate how the recent production of Riders Of The Purple Sage ties into the traditions set forth by George Gershwin and Scott Joplin. This event is a fundraiser for the Arizona Opera Department of Education.

Final Four Fan Fest
Despite the best efforts of no-nonsense head coach Bobby Hurley, the ASU men’s basketball program leaves a lot to be desired for local college hoops fans. The Devils haven’t made the tournament in years, and it might be a while before they do. This year, however, hoops fans suffering from the tournament-drought blues have been given the sweetest of reprieves: The Final Four is coming to town.

Even if coveted tickets to a game are out of the budget, the Mecca of collegiate sports, the Final Four Fan Fest, is coming to the Phoenix Convention Center, 100 North Third Street, from March 31 to April 3. So your brackets busted and that Christian Laettner autograph has eluded you thus far? Redeem yourself at the Fan Fest while being doused with corporate sponsor swag on Friday, March 31, from noon to 8 pm. Tickets are $10 for adults. Visit the NCAA Final Four website or call 602-262-6225 for details. Rob Kroehler Performance artists explore their own personal and ancestral histories as Elisa Gonzales directs La Casa de Inez.
Photo courtesy of ASU Herberger Institute for Design and the Arts
Critical Mass
With a warning as convincing as “Be there or be a car-head,” how could you not attend the March Critical Mass Ride?

Hosted by the Critical Mass PHX/Tempe group, the March Critical Mass Ride will meet at 7 p.m. on Friday, March 31 (sticking to the last Friday of the month tradition), at the Third Street entrance to Steele Indian School Park, 300 East Indian School Road, in the parking lot next to the gate. Be sure to BYO bike (and lights, helmet, and sense of bravery) for this fearlessness-in-the-face-of-traffic outing rolling from 7:30 — giving everybody plenty of time to roll up one pant leg — to 10 p.m.

The ride is free to join. See the Facebook event page for more details. Lauren Cusimano Greg Lutz (foreground) stars in Hughie.
iTheatre Collaborative
Park of Four Waters Tour
It’s practically irresponsible to live here without learning about the people who used to live across from the Circle K, especially when Pueblo Grande Museum Archaeological Park’s literally on the site of a 15th-century Hohokam village.

On the final Friday of each month, October through April, the museum’s guided Park of Four Waters Tour leads visitors to the remnants of canal systems built by the Hohokam to water crops. The terrain includes undeveloped desert and a railroad grade, so keep mobility in mind when making your plans.

"Tarot 101"
If all your knowledge of all that is mystic comes courtesy of Spencer Pratt and his penchant for crystal therapy, it might be time to leave your Hills-founded notions behind. As luck would have it, Fantasia Crystals is hosting a three-part series delving into “tarot, the esoteric meaning of numbers, and symbol interpretation” at 5108 North Seventh Street. Beth Rodriguez leads “Tarot 101” at the shop from 6 to 8 p.m. on Friday, March 31. The course begins, fittingly, with the origins of card-reading and the basics of using tarot as a tool. Register for the introductory course by calling 602-277-0538. Cost is $60, and follow-up classes take place the following Fridays. See details at the Facebook event page. Becky Bartkowski

Read on for more of the best events Phoenix has to offer this week.