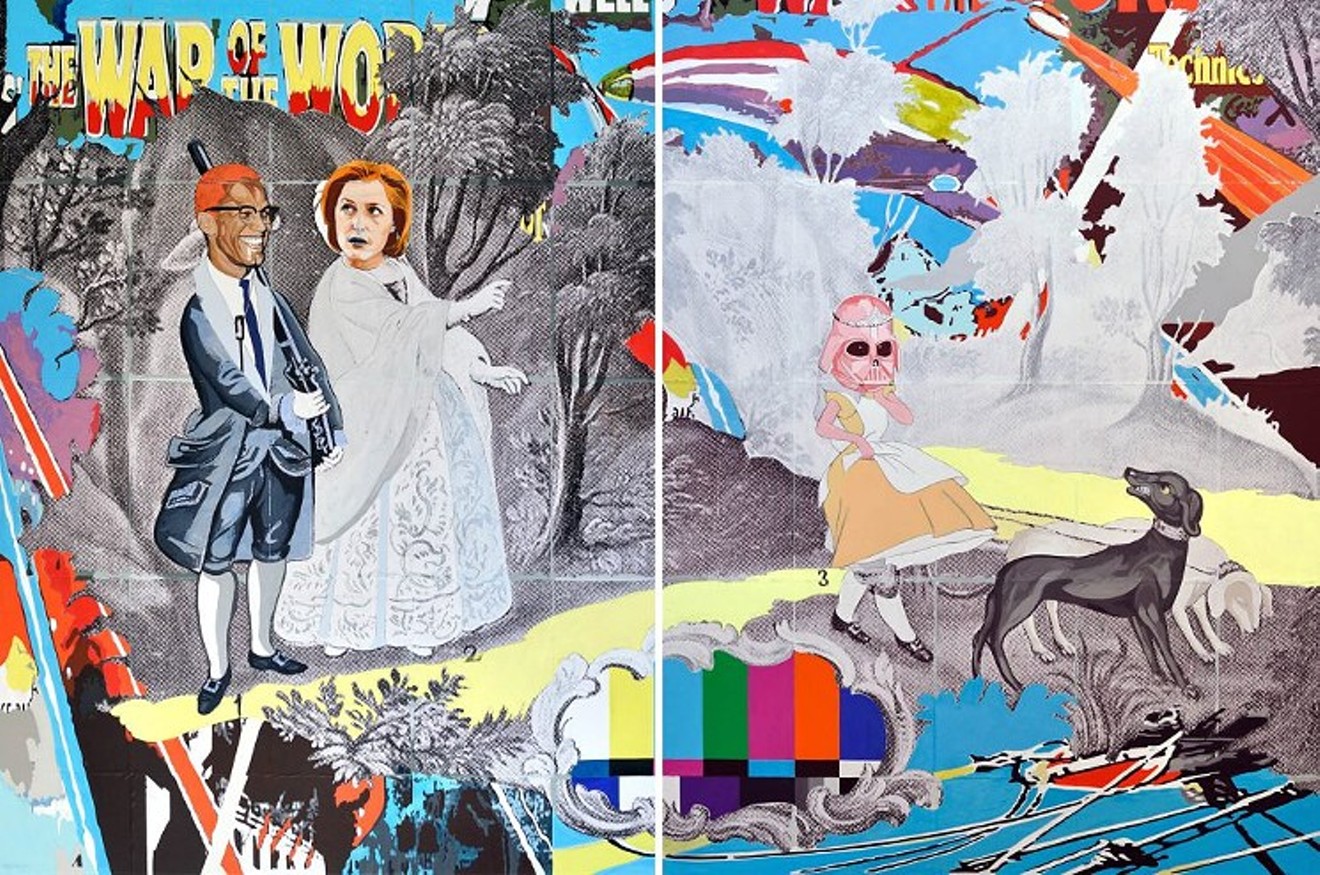 The fresh exhibition lineup includes the latest iteration of southwestNET, a series that highlights midcareer artists living in the Southwest region of the United States or Mexico. This is the 17th exhibition in the series, which has also showcased work by Postcommodity, an artist collective featured in last year’s Whitney Biennial.

SouthwestNET: Claudio Dicochea showcases the artist’s skillful manipulation of pop culture and history, which challenge prevailing narratives about both present and past. Dicochea is represented by Lisa Sette Gallery.
Other new exhibits feature work by a trio of Inuit artists, as well as Guadalajara-based Luis Alfonso Villalobos. Visit the Scottsdale Museum of Contemporary Art website. Lynn Trimble
The SIC Sense: 10-Year Anniversary Part I
Your live comedy options have grown both wide and deep. From improv to stand-up to overly frank storytelling, something will make you laugh enough to imperil various physiological systems. Having grown up with Carol Burnett (and not in reruns) and every single season of SNL, we favor sketch comedy, complete with randomly placed songs. One of our favorite purveyors is The SIC Sense, now celebrating 10 years of disgusting mayhem with The SIC Sense: 10-Year Anniversary Part I, the first in a two-part retrospective.

Chuck Browning has been a part of the gay rodeo community since the late 1980s.
Randi Lynn Beach
Arizona Gay Rodeo
Giddy up. The 33rd Arizona Gay Rodeo is boot-scooting to the Valley. Details are still coming together for this year’s event, but cowboys who buck broncos and rope cattle are a given. During previous years, there’s been dancing, barrel riding, and calf-roping lessons, as well as a chili cook-off. Additionally, singers from around the Valley will compete for the title of Country Idol. And you won’t wanna miss the crowning of rodeo royalty when some lucky cowpokes taking home the title of king and queen of the rodeo.

Enjoy traditional Chinese music and dance performances, martial arts demonstrations, and table tennis. Vendors will offer items ranging from arts and crafts to food. There’s a whole pavilion for kids to engage in youth-centric activities, while a photo booth provides the selfie souvenirs.

Add a bit more pop in your week.
Benjamin Leatherman
Guilty Pleasures: Lady Gaga vs. Kesha
Lady Gaga and Kesha have revolutionized pop music with their distinctive sounds, fashions, and personas. On Friday, February 16, DJs A Claire Slattery and (a.k.a. New Times’ arts and music editor Becky Bartkowski) will pay tribute to the artists during a 21-and-older dance party devoted to the two superstars.

During Guilty Pleasures: Lady Gaga vs. Kesha, the DJs will play hits from the two singers and mix in songs from popular artists such as The Weeknd, Gwen Stefani, Bruno Mars, Taylor Swift, Katy Perry, Pink, Lorde, Ellie Goulding, and Liam Payne. Fans of Gaga and Kesha can rep their fave with buttons given out during the event.

Diamondbacks Fan Fest
Punxsutawney Phil recently saw his shadow, but here in the Valley, we’re casting plenty of our own shadows thanks to all this blistering sunshine. Maybe it’s the record-setting temperatures that January hurled at us, or maybe it’s a post-Super Bowl lull, but it certainly feels like spring is sneaking up on us like an old pair of gym shorts. At least they’re cozy at first.

The silver lining? Baseball. Clouds likely will be absent from the Diamondbacks Fan Fest on Saturday, February 17, at Scottsdale’s Salt River Fields, 7555 North Pima Road, but D-backs fans have seen enough gloominess since their team was bounced from postseason play by the reviled Dodgers just a few short months ago.

The free event kicks off at noon. Visit the Diamondbacks website or call 480-270-5000 for details. Rob Kroehler