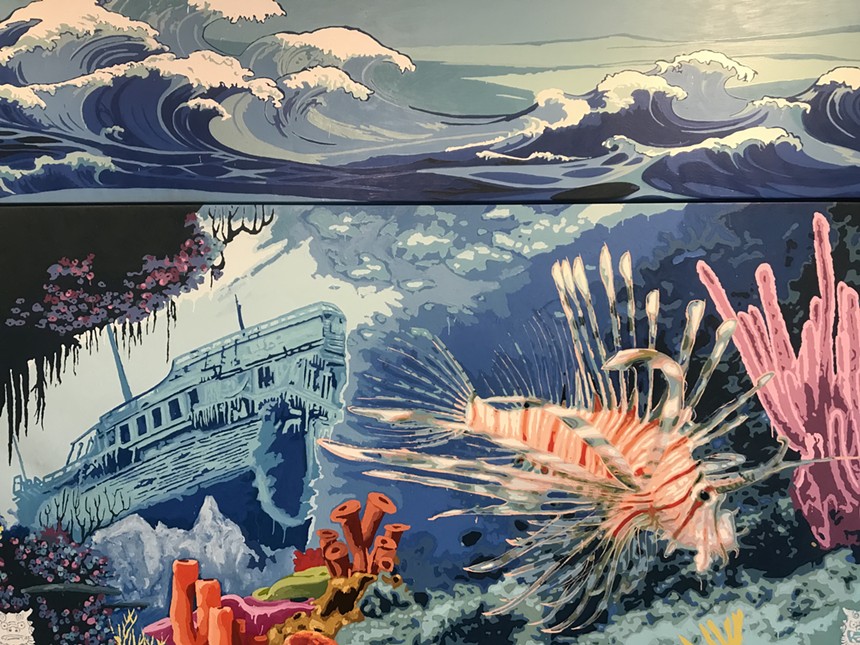 She’s one of more than 70 artists whose work was shown during “Chaos Theory,” an invitational exhibition organized by Randy Slack, who co-founded the annual exhibit more than 20 years ago.

Lopez is one of a handful of artists who’ve consistently shown work at “Chaos Theory” through the years, often exploring her immigrant roots and Latino identity, as well as the bigotry she’s encountered in the art world and the community at large.

Her piece is one of several compelling portraits in this exhibition, which includes artworks in several mediums — including painting, photography, mixed-media, metal, fiber, and more.

L to R: Communication Breakdown by Judith Ann Miller and Native North American by Annie Lopez.
Lynn Trimble
Others were created by Carolyn Lavender, who used acrylic and graphite on prepared paper to manifest her niece as Anne Boleyn for a new series of portraits elevating feminist themes, and Rachel Bess, whose title for her compelling oil painting of a female figure channels a familiar pandemic feeling: Crumpling Space-Time.

The artist lineup for "Chaos Theory" has been relatively stable for several years, with modest changes that loop in different emerging and established artists over time. Last year, Slack canceled the exhibit, citing Covid-19 concerns.

Although this year’s iteration didn’t deliver any surprises in terms of ideas, materials, or form, it did serve as an important milestone for the arts community, signaling the fact that a growing contingent of artists are moving towards negotiating a new normal in the local arts scene.

As you’d expect, several artists greeted this pandemic-era exhibition with humor. The Molten Brothers embellished a small oil painting of a roll of duct tape with two ceramic banana peels. William LeGoullon created a grid with 81 photographs of stucco in various shades of beige.

200 miles down the Salt River by Elizabeth Brice-Heames.
Lynn Trimble
The landscape offerings were particularly interesting this year, due in part to artists’ vastly different styles. Randy Slack’s large-scale painting provided underwater and above-the-surface views of a body of water in Japan. Elizabeth Brice-Heames brought a strong graphic element, complete with a radically curved saguaro cactus, to her landscape titled 200 miles down the Salt River.

For Lithium, Christina Ramirez used thick layers of paint and repeating lines to create a hypnotic white mountain, proving that simplicity can have striking results. Andy Brown created patterns at once orderly and random, forming an intriguing maze-like environment with a mixed-media piece called finding the way.

JB Snyder exhibited a fluid oblong painting with a rainbow of hues set amid intersecting curved lines that created playful vignettes of color and form. 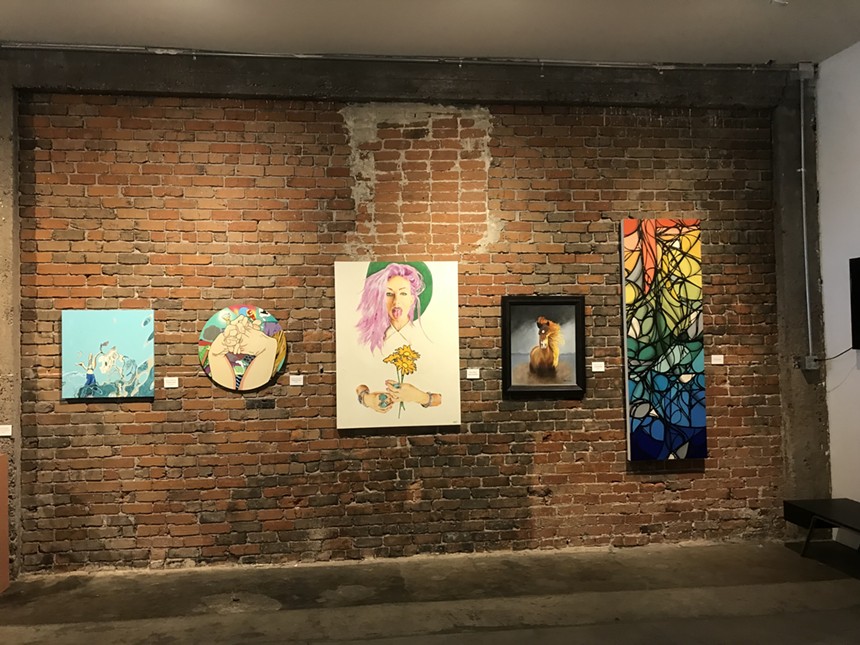 Installation view of "Chaos Theory" at Legend City Studios.
Lynn Trimble
Meanwhile, Bill Dambrova showed his facility for creating narrative abstractions infused with human anatomy in a mixed-media on canvas piece titled I Think I Hit Your Back Button, amplifying its humorous tone with a pair of ceramic pineal glands suspended from the bottom of the piece.

Taken together, these works reveal the ways Arizona artists are transforming their ideas into an intriguing array of aesthetic forms, sometimes working with themes rooted in desert life but often taking a more expansive view.

Right: Double Take by Merryn Omotayo Alaka and Sam Fresquez.
Lynn Trimble
Other stand-out artworks included Creator is a Woman, Jacob Meders’ piece made with found object, acrylic, and gold leaf, and a large-scale sculpture titled Double Take. Created by emerging artists Merryn Omotayo Alaka and Sam Fresquez, the suspended chandelier made with Kanekalon hair and braid clamps reflects the ways their identities have been shaped by expectations for Black and Latinx women.

Despite the relative sameness of “Chaos Theory” exhibitions in recent years, the invitational continues to be an important marker on the Arizona arts landscape, where Slack creates space for selected artists to demonstrate a strong mix of conceptual and aesthetic depth.
KEEP PHOENIX NEW TIMES FREE... Since we started Phoenix New Times, it has been defined as the free, independent voice of Phoenix, and we'd like to keep it that way. With local media under siege, it's more important than ever for us to rally support behind funding our local journalism. You can help by participating in our "I Support" program, allowing us to keep offering readers access to our incisive coverage of local news, food and culture with no paywalls.
Make a one-time donation today for as little as $1.