Your Guide to Taiyou Con 2023 in Downtown Mesa — Tickets, Special Guests, and More Celebrate your anime fandom at Taiyou Con 2023. Benjamin Leatherman
Anime is seemingly taking over the pop-culture world, one fan at a time. Interest in the Japanese-born animation genre has increased exponentially over the past few years, especially during the pandemic, as millions have gotten into shows like One-Punch Man and Attack on Titan or flicks like Akira.

And anime fandom is only getting bigger with each passing year, and it's not just teenagers and weebs.

The general public’s awareness of anime also spilled over to anything and everything having to do with the pursuit, including events like the Valley’s annual Taiyou Con.

The three-day convention, which is devoted to anime and other Japanese-oriented pop cultural pursuits, takes place every January at the Mesa Convention Center. This year’s edition runs from Friday, January 6, to Sunday, January 8, and will feature its usual mix of cosplayers, vendors, and special guests (including voice actors from popular anime shows).

Read on for more details about what’s in store for the con.

When and Where Is Taiyou Con?

What Are the Hours?

Event hours vary, depending on the particular area or activity. The official schedules for the different parts of Taiyou Con are as follows:

How Much is Admission?

If you’re buying in advance, single-day admission is $39.99 for Friday, $44.99 for Saturday, and $34.99 for Sunday. If you’re planning to spend the entire weekend at the con, a three-day badge is $59.99 in advance. (Note: Prices are $5 more at the event.) There’s also a bundle package for $74.99 that includes admission to all three days, branded Taiyou Con merch, a special book, early-bird access to the vendor hall on Friday, and more.
click to enlarge You might run into a Goku or two at Taiyou Con this weekend.
Benjamin Leatherman

Nope. Taiyou Con is a family-friendly event open to all ages. Be aware that certain programming and events will be limited to those who are 18 and over, though.

How Do I Get There?

There’s a Valley Metro Light Rail station a few blocks south of Mesa Convention Center if you’d like to leave your car at home. Fares are $2 for a single ride, $4 for an all-day pass and trains run until 2 a.m. on weekends. If you’re coming by car, take either the U.S. 60 or Loop 202 freeways to Country Club Road and head towards downtown Mesa before going east on Second Street for a few blocks to reach the convention center.

What Sort of Food and Drink Options Will Be Available?

Vending machines are located throughout the Mesa Convention Center while a concession stand offering selections like hot dogs, sandwiches, and pretzels is available inside the vendor hall. Food trucks will be set up in the Grand Plaza outside and sell Asian, Japanese, and American fare. A list of vendors and trucks will be available via the Taiyou Con app during the event under the “Points of Interest” section.

If none of these options are suitable, downtown Mesa’s wealth of bars, restaurants, cafes, and coffee joints are all within walking distance of the convention center. 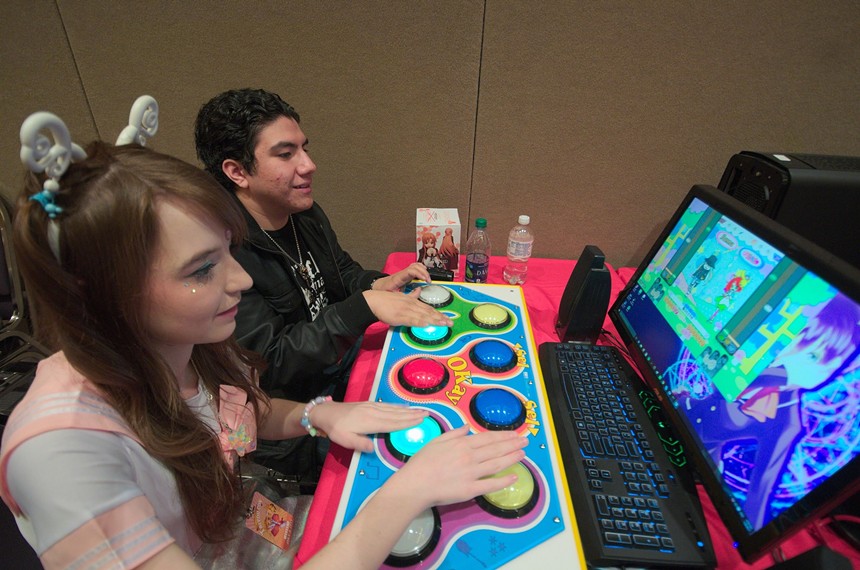 What Can You Do at Taiyou Con?

Geek out about anime and Japanese culture. Check out the wide variety of items and art work for sale in the vendor hall. Attend Q&A sessions featuring the special guests. Play video games. Participate in K-pop dance sessions or trivia contests. Hang out at with other cosplayers. Learn how to make animated music videos.

How Much Programming Will Happen at Taiyou Con?

According to the con’s website, there will be at least 300 hours of programming and activities throughout the weekend, including fan discussions, anime screenings, maid cafes, and much more. Organizers recommend downloading the Taiyou Con app for the full schedule.

What Are the Solar Japanese Festival and Luna’s Night Market?

During daytime hours, the convention center’s Grand Plaza will host the Solar Japanese Festival with outdoor activities, vendors, and light entertainment. Starting at 6 p.m., the scene will become illuminated with lights and transform into a night market with local anime fans selling and trading their gear and goods underneath a number of tents (click here if you’re interested in participating). 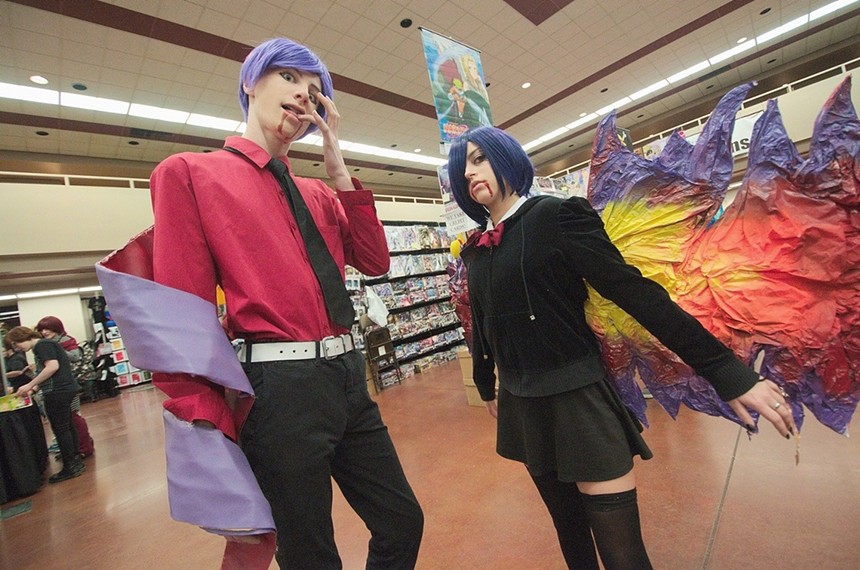 Inside the main room of the Mesa Convention Center. Dozens of booths will offer costuming items, merch, toys, games, and (of course) tons of anime and manga. There will also be an artist alley.

Who Are the Special Guests This Year? Big weapons are a thing in anime and at anime conventions.
Benjamin Leatherman

As you might expect, it’s a huge part of the event. Most everyone in attendance will be dressed colorfully or adorn themselves in costumes of some sort, which means nonstop people-watching opportunities during the event.

Cosplay gatherings devoted to many different fandoms — including My Hero Academia, Naruto, Attack on Titan, and Persona — are also scheduled throughout the weekend at various areas around the convention center (check out the Taiyou Con app for a schedule). The annual masquerade is scheduled from 7 to 9 p.m. on Saturday night in the Palo Verde II room in the convention center and will feature some of the best costumes of the weekend, as well as a number of skits and lip-syncs performed by attendees.

Keep in mind, though, the event has a dress code. Outfits that show off a lot of skin or lack a clear line of sight won't be allowed. Attendees also won't be allowed to go barefoot.

What Should You Bring to Taiyou Con?

Comfortable footwear is a must, as is a government-issued ID, a swag bag, bottled water, a fully charged phone, and some cash. Prop weapons are also allowed, provided they aren’t real firearms, actual metal swords or other bladed items, nunchaku, aluminum baseball bats, or self-defense weapons like pepper spray or stun guns. Security will inspect and peace-bond all costume weaponry upon entry to the event.

What Shouldn’t You Bring?

A disruptive or disrespectful attitude, as well as any real weaponry or any other dangerous items, including giant robots or demons.

What Else Is Important to Know?

It's necessary to have a healthy amount of respect for cosplayers and fellow fans at the event (translation: don't be a bully, troll, or creeper). Taiyou Con has strict rules to prevent violence, sexual misconduct, harassment, stalking, property damage, gender-based discrimination, or disruptions of operations.

According to the con's website, officers from the Mesa Police Department will be patrolling the event, and attendees are "encouraged to report inappropriate behavior" they encounter.
KEEP PHOENIX NEW TIMES FREE... Since we started Phoenix New Times, it has been defined as the free, independent voice of Phoenix, and we'd like to keep it that way. With local media under siege, it's more important than ever for us to rally support behind funding our local journalism. You can help by participating in our "I Support" program, allowing us to keep offering readers access to our incisive coverage of local news, food and culture with no paywalls.
Make a one-time donation today for as little as $1.