So are all the "new" kids on the block -- Osby. Redman. Moran. Wilson. Hunter. Medeski. Lovano. Scofield. Marsalis. Watts.

You'll find a ton of stuff by these giants of jazz at this superstore, and at a competitive price. So what if they spell tenor saxophonist Dexter Gordon's name three different ways (Gorden, Garden and Dextor)? They've got a bunch of his records on the racks, and that's what counts.

Thanks to the evils of the "smooth jazz" radio format that's caught on around here like a dreaded disease, too many folks equate the slicked-up stuff done by the likes of the Antichrist -- a.k.a. Kenny G -- as "jazz." All the while, wonderfully inventive and prolific musicians such as James Carter, Cyrus Chestnut, Patricia Barber and Joe Lovano are doing their best work, usually to sympathetic audiences in Europe and Japan instead of their native shores.

One consolation to the scant airtime these artists (and dozens of others) get in the Valley is the surprisingly cool selection that populates the "jazz" section at the Tempe store. Warning: The employees there are much more apt to be able to blab about the music of Biggie Smalls than Fats Waller, and about Will Smith rather than Willie "The Lion" Smith, so you'll pretty much be on your own.

Despite the outdated façade and the less than, um, stellar location -- right off a bleak stretch of Van Buren, abutting a women's correctional facility -- the Celebrity Theatre continues to be the best spot to view the entire musical spectrum up close and personal. After all, where else in town can you get an equally good view of Belinda Carlisle's prodigious ass and Burt Bacharach's prodigious teeth?

While the Celebrity's unique appeal has remained unchanged, the venue has expanded its stylistic reach, booking everyone from gospel performers to metal bands, country artists like Merle Haggard to rappers like the Wu-Tang Clan. In fact, if the Celebrity makes only one change to update its image, we suggest adding the face of Wu-Tang's Ol' Dirty Bastard onto the Mount Rushmore of celebrities depicted behind the concession stands, perhaps next to fellow ol' dirty bastard Barbra Streisand. 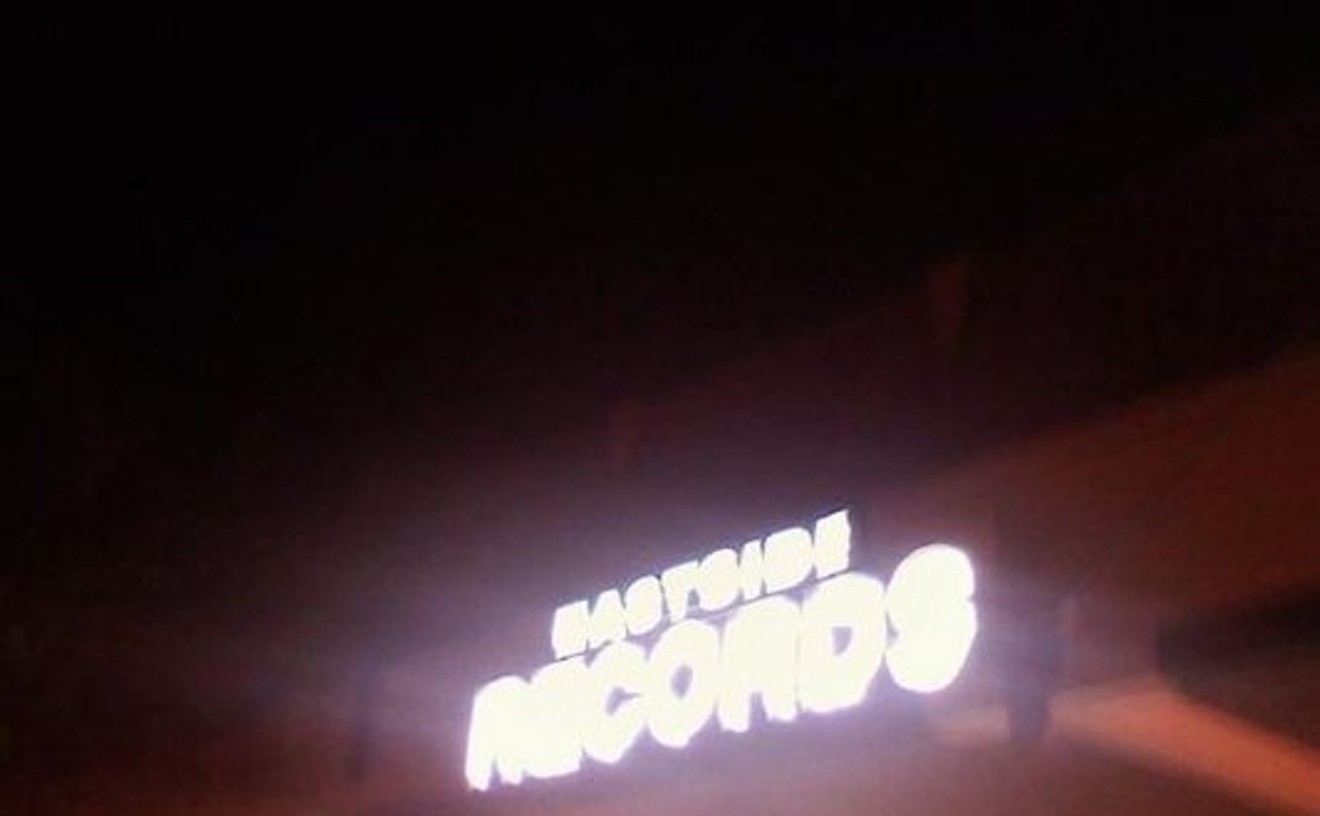 Remember High Fidelity, the Nick Hornby novel turned hit movie in which the plot revolves around the owner of an indie record store and his small staff of pop-culture professors? Well, if you didn't know better, you'd think the story was written about the malcontents working the counter at Tempe's Eastside Records. On any given day or night, Eastside's employee patter could encompass everything from the women-hating tendencies of multiplatinum gangstas like Chuck D. and their relation to Little Richard's debauched libido to which 1977 punk rock band was worse, the Drones or Slaughter and the Dogs. And much like Championship Vinyl, the fictional store in Hornby's story, Eastside Records harbors an exemplary selection of vinyl and CDs to back up its faculty's witty piss takes. God save Eastside Records!

A few months ago, KUPD inaugurated a new TV advertising campaign. In the ad, a crowd of rambunctious kids at a hard rock concert shouts out their devotion to KUPD, while the mother of morning DJ Dave Pratt holds a picket sign complaining that the station is too damn loud.

More than any station in town, KUPD knows its demo. It knows that station loyalists don't want their parents to like the music they listen to. So KUPD cranks it up to 11 with the kind of heavy-rock flamboyance that's been making parental ears bleed since Iron Butterfly got lost in a gadda da vida.

KUPD serves up a mix of the modern (Foo Fighters, Queens of the Stone Age), the classic (Metallica) and the all-but-forgotten (Faith No More) in equal measure, but the common denominators are volume and attitude. It's unapologetically unhip fare that scores a direct hit with the suburban, teenage, air-guitar virtuoso in all of us.

In 1993, when KEDJ debuted on the local airwaves, starting an alternative-rock radio station was a safe bet. Nirvana and Pearl Jam had shattered the old programming order, and Lollapalooza Nation was congregating every summer to celebrate the shared triumph of a new music revolution.

In 2000, Nirvana and Lollapalooza are both history, and Pearl Jam's Eddie Vedder is about as relevant to today's youth as Eddie Cantor. Not surprisingly, the alt-rock format has taken a pounding in many markets. But KEDJ, also known as "The Edge," has survived it all: Kurt Cobain's suicide, the teen-pap meltdown of MTV and even a 1999 sale that saw New York-based conglomerate Big City Radio take over the station.

The Edge has survived by adapting to the changing definitions of "alternative," loading up on the rap-metal dementia of Limp Bizkit and Korn, while maintaining a soft spot for three-chord pop-punksters like Blink 182, the Offspring and Green Day. In a city that loves to moan about its lack of a college radio station, KEDJ remains the best bet for guitar-based music that fits in the wide demographic slot between prepubescent and postmenopausal.

By day, KJZZ is a National Public Radio affiliate, replete with talk shows and news reports. But when the sun goes down, KJZZ mutates into the Valley's premier (okay, only) source of authentic acoustic jazz, covering the gamut from legendary artists like John Coltrane and Dizzy Gillespie to modern torchbearers like Roy Hargrove and Wynton Marsalis. Local jazz chanteuse Blaise Lantana is the station's signature weeknight DJ, peppering her musical commentary with updates on what's shaking in local clubs.

Every Sunday afternoon, KJZZ becomes the voice of the Delta juke joints, combining syndicated blues programming with Those Lowdown Blues, an unmatched blast of 12-bar nirvana provided by Rhythm Room honcho Bob Corritore. Corritore is a Chicago native who's not only befriended many blues titans, but has also established himself as a Hightone Records artist with his solid harmonica work.

Between Lantana and Corritore, there is no better source for these distinct but complementary American musical genres.

Seven years ago, when KBAQ began broadcasting out of a cramped office space at Mesa Community College, local radio was caught in a classical drought. The Valley's lone classical station, KONC-106.3, had recently fallen off the commercial end of the dial to be replaced by the alt-rock ravings of KEDJ. For a few months there, the only chance you had to hear a harpsichord on local radio was when the oldies station played Gary Lewis and the Playboys' "Everybody Loves a Clown."

But KBAQ stepped into the breach, ably carrying the Valley's classical burden on its thin 3,000-watt signal. Careful but not conservative, KBAQ has mixed the gems of the 18th-century Viennese masters with smart nods to the modernists. It's also supported the local scene with frequent broadcasts of local chamber-music concerts and a splashy 1998 tribute to the Phoenix Symphony Orchestra on its 50th anniversary.

Best of all, this is one station where the DJs -- sorry, "music selectionists" -- don't sound like they're trying to shout you into submission or sell you a used car.

These days country ain't cool, and most of the blame can be placed on navel-exposing poseurs like Shania and She-Daisy, whose manufactured pop inundates the airwaves on the Valley's two country radio powerhouses. Meanwhile, true country music has remained buried, hidden way up on the AM side, usually nestled somewhere between the police band and the airport traffic station.

But these days Valley listeners can get a taste of hard-core honky-tonk and tears-in-your-beer goodness, thanks to KXKQ-FM, Safford's "Kat Country." Admittedly, the station's playlist does include a handful of "new country" acts. But with two out of every three songs passing the true twang test, KXKQ is a saving grace to those who think country should sound more like Merle than Mariah.

The station's signal isn't flawless, and tends to fade depending on your location, but the sonic selection more than compensates for a bit of static. And, yee-haw! When was the last time you heard Johnny Paycheck and Buck Owens on the FM dial?

Phoenix's unlikely reputation as a hotbed for the dance and DJ genres has always tended to obscure the other side of the urban music coin, hip-hop. Part of this can be blamed on the historical lack of a progressive broadcast powerhouse to bring the music to local ears. In more recent years, Power 92 has emerged as something of a force in carrying that musical message to Valley audiences. Though situated precariously close to the NPR affiliate -- we wouldn't want white suburban Eminem fans to have to suffer any intelligent thought -- KKFR 92.3 has shaped itself into the leading beacon of hip-hop programming. Unlike the other urban format station (KMJK 92.7/106.9), which sticks to more adult and smooth R&B fare, Power 92 keeps it, um, real -- so to speak.

Admittedly, the station's playlist never veers off into adventurous or eclectic territory, but it does provide local airwaves with meat-and-potatoes offerings from mainstream (and just outside the mainstream) rappers and harder-edged R&B performers. And the station's ever-improving weekend specialty programming and mix showcases point to an even more promising future.