It's a kinder, gentler Arizona these days, where upscale restaurants don't limit themselves to impressing us with exotica from faraway lands.

The new fine dining experience celebrates the products born and raised in our own Valley of the Sun. Chefs like Rancho Pinot's Chrysa Kaufman insist on using locally grown or raised organic produce, eggs and dairy products as much as possible.

That's why we can usually be assured that the produce we're enjoying in Kaufman's dishes, such as wood-oven roasted vegetables with crispy risotto-wheatberry cake, came from a local grower. Or that the quails we're feasting on were raised at a local farm.

Rancho Pinot celebrates Arizona heritage in the 21st century, with its funky cowboy-chic interior. It celebrates the take-it-easy Western past, with Kaufman's commitment to "Slow Food," an international organization that promotes cooking from scratch, using the freshest, artisan boutique ingredients.

Can't face another drive-through meal of burger and fries?

Housed in a former Jack in the Box, the drive-through accommodates gourmet motorists with a decidedly un-fast-food menu featuring the likes of grilled ostrich, mofongo (charbroiled chicken and beans) and tostones (fried plantains). Traditional grease 'n' go fare, this isn't. The few fried items are virtually oil-free, and many dishes (most dinners are priced at $7 or less) are healthful combinations of fresh grilled meats, veggies, rice and beans in light sauces.

Say, you wanna supersize that mofongo?

The status of appetizers has changed in American restaurants. It used to be that most starters were mild-mannered offerings, designed to keep diners quiet while the kitchen had time to work on the main event. Appetizers used to be little more than tossed salad, soup, deep-fried veggies and, in a nice place, perhaps a shrimp cocktail.

Today, in good restaurants, appetizers are works of art. They're prepared as meticulously and creatively as entrees -- sometimes even more so.

At Ridge Cafe, however, appetizers aren't just as elaborate as entrees, they're almost as big -- at half the price of a full dinner.

The chefs here serve up a generous asparagus and shrimp combo, with beautiful veggies served cool and crisp under two truly jumbo shrimp in a tidy, red onion and dill vinaigrette. What could be better than a massive chile relleno, a pristine pasilla pepper in lacy batter stuffed with whole mushroom, chicken breast and jack cheese? And how about a mussel appetizer, bringing a generous baker's dozen of bivalves in a savory white wine, tomato, garlic and fennel broth?

A few slices of bread, a glass of wine, and there's simply no room left in our bellies. Change is good, we've been told. We have to agree.

It's all a matter of priorities. Do you want to live 90 years eating Dairy Queen, or 40 years eating Ritter's? When given the choice to Live (fat) Free or Die, we and our Dionysian fat friends invariably choose the latter. Ritter's gourmet custard (glorified ice cream) is sumptuous, voluptuous and fat on rich flavor. This strangely retro little malt shop in Gilbert offers daily specials that, cumulatively, are now referred to by area residents as "Murderer's Row." 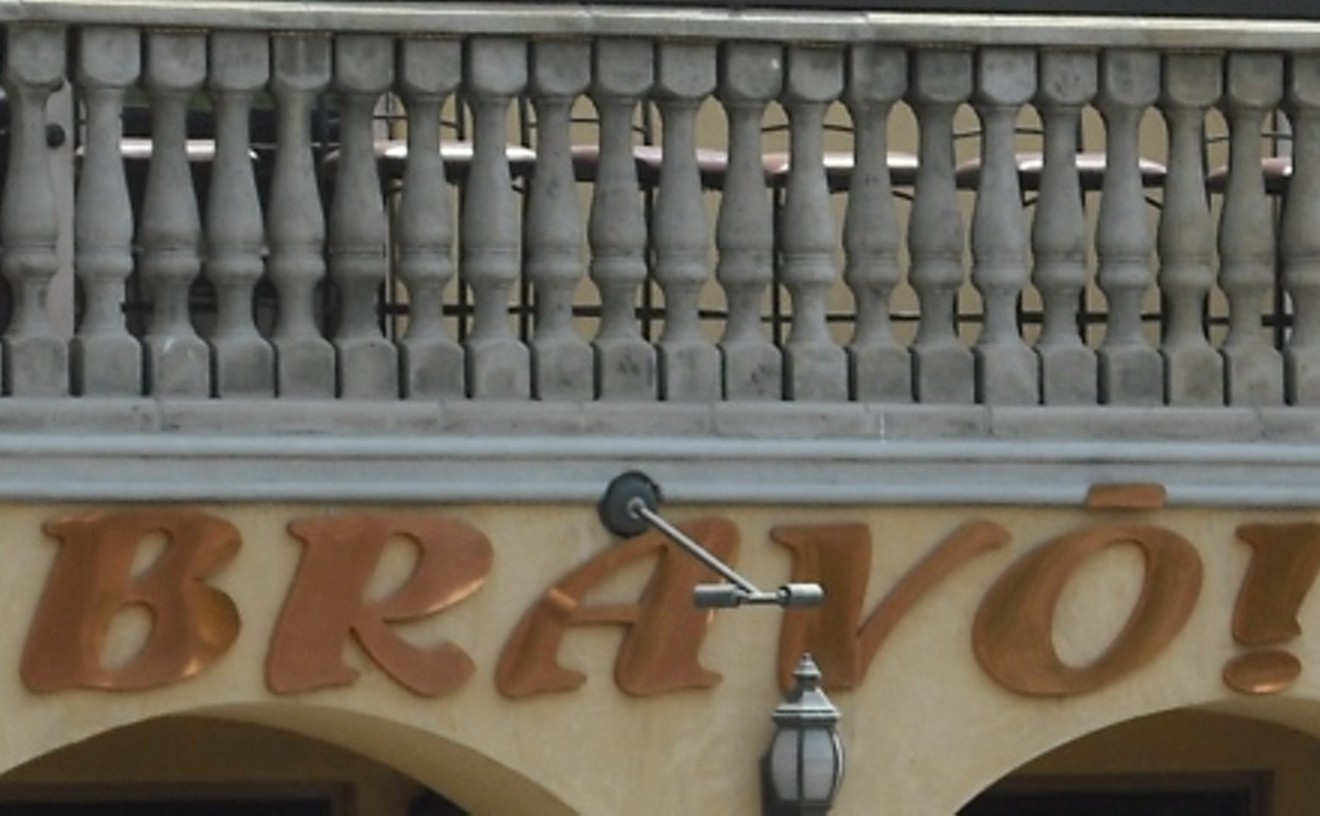 All couscous is not created equal. Some are achingly dry, like herby dust. Some are sadly sodden, like seasoned moss. Some, like the kind served at Bravo Bistro, are spectacular.

Bravo's couscous is Moroccan, which means it's larger and moister than the tiny seffa variety served around town. These caper-size beauties pop in the mouths, exploding with wholesome, grainy goodness. Bravo serves this dish with sautéed grilled chicken and fresh vegetables in an aromatic herb broth.

It's the couscous we choose.

Best Place for a Twilight Drink

It's a hefty drive -- some 35 miles north of downtown Phoenix -- and there's not a lot to look at on the lonely stretch of highway leading to this massive master-planned community in the middle of nowhere.

But that's exactly what makes the final destination so spectacular. Once parked on the patio at Persimmon, there's nothing to compete with the views of Daisy Mountain, soaring almost 3,200 feet above the desert floor. No towering buildings. No sense of the pulsing, gasping rat race we've left at the far fringes of Phoenix. Once the sun goes down, there aren't any city lights to compete with the twinkling stars above -- just a few muted porch bulbs from homes tucked across the yawning golf course that serves as Persimmon's backyard.

The grill faces west, meaning we're in for spectacular sunsets. The country club has yet to be overrun with residents, meaning we're able to enjoy some peace and quiet with our Pinot Grigio. The outdoor furniture is fancy, cushy and clumped in private tête-à-têtes.

And for now, the view is free. The grill is open to the public. Now, that's worth a toast.

Why are pizzas in New York so insanely large? It's not like there's a lot of spare room in this crowded city. The typical Gotham City pie is so immense that even someone the size of the Statue of Liberty would have difficulty scarfing down more than a few slices.

But the real head-scratcher is why many of the pizzas found in the Valley are such dainty little numbers. This is the land of wide-open spaces, where tough-talking cowboys cuddle with rattlesnakes and keep company with scorpions. Yet here, thin crust rules, slices require just one hand, and many places top their pizzas with -- gasp! -- designer stuff like barbecue sauce, feta, goat cheese and shrimp.

When we're craving good, old-fashioned New York-style pie, we pick Pizzafarro's. There's nothing shy about these servings -- the 16-inch large is enough to feed a family of four. Pillowy-crusted slices are enormous. We can fold them for easier eating, but if we don't want delicious pizza oil dripping down our fronts, we're looking at using a knife and a fork.

Pizzafarro's doesn't believe in frou-frou, either. All our favorite toppings are there (even fresh anchovies), but the only nods to contemporary cuisine are artichokes and green chile.

Back up the SUV and fold down the seats. We're going to pick up a pie from Pizzafarro's.

At a time of night when other restaurants along Camelback's gourmet row have long since rolled up the kitchen, Barmouche sizzles with its first-rate, creative French cuisine. Midnight munchies include portobello lasagna with made-on-site mozzarella, ricotta, parmesan, goat cheese and spinach, an 18-ounce New York sirloin with choice of sides (Belgian frites and sweet-pea mashed potatoes are sublime) and a Scotch beef fall-apart steak in red wine gravy.

Even the sleepiest snacker will come wide awake with Barmouche's croque monsieur, combining hot ham, Gruyère cheese and Béchamel sauce in thick French bread. It's our pick, paired with a side of crisp, garden-fresh asparagus sautéed in butter.

Barmouche's restaurant is open until midnight seven days a week; the bar, which also serves food, remains open until 1 a.m.

You snooze, you lose.

This primo pie is not for wimps. The large pie (18 inches) is about two and a half inches thick, and weighs almost 20 pounds. The big and tall men among us may be able to wrestle the huge slice into their mouths, but the rest of us are forced to use utensils to avoid muscle strain in our elbows.

At Western, there's no skimping on toppings -- bubbly-crisp dough groans under the weight of barbecue chicken breast with pine nuts, or spinach, feta, olive, sun-dried tomato and pesto. The best seller is the Western Round-Up, with mushroom, pepperoni, salami, ham, peppers and onions (the meat is layered high and thin like a hoagie, then buried under a truckload of mozzarella).

And we like Western Pizza for its hours. It's not only open until 3 a.m. Thursdays through Saturdays (1 a.m. other days), it delivers until then, too. That's pretty macho.

After eating too many fair-to-middling versions of this Greek standard to remember, we were inclined to agree with Tina Turner when she sang. "We don't need another gyro."

Of course, that was before we discovered the Hellenic heroes served up at Super Gyros. A two-handed feast of Olympian proportions, the generous mound of pressed lamb and beef is so juicy, we actually forget there's a side container of wonderful yogurt dressing until we're halfway through.

But don't you make the same mistake: As the sauce succulently soaks into the hot pita bread, it lends a tangy kick to the feta-topped meat that's fit for the gods. Super Gyro? Don't myth it.