It feels almost traitorous not to bestow this award on Harkins' Camelview 5 in Scottsdale, which has pretty much single-handedly maintained what little independent and foreign film fare the Valley has to offer. But Dan Harkins has outdone himself with the Valley Art, a beautiful, modernized renovation of the spot where he claims to have been conceived when his parents lived and worked there, operating the Mill Avenue theater before it fell into disrepair. The Valley Art's stadium seating rises gently, offering both good viewing and the feel of a traditional movie theater, and, while the screen isn't giant, it is set in perfect relationship to the seats. Now if Harkins will just upgrade Camelview to the same level of cleanliness and comfort, indie film could be treated with the respect it deserves.

Phoenix is no Manhattan, but we're inching our way toward the Big Apple's $10 movie ticket prices. There are few alternatives for the financially deprived, except Tempe Cinemas. Miss a movie première? Wait a while and watch it here for less than half the price of a regular matinee. The ticket lines move quickly, and the box office is inside, so you don't have to sweat it out behind a bunch of sluggish patrons. Expect plush seating and thunderous THX surround sound; there's even an affordable, full-service snack bar, so you don't have to smuggle in outside goodies. There is such a thing as a cheap date. 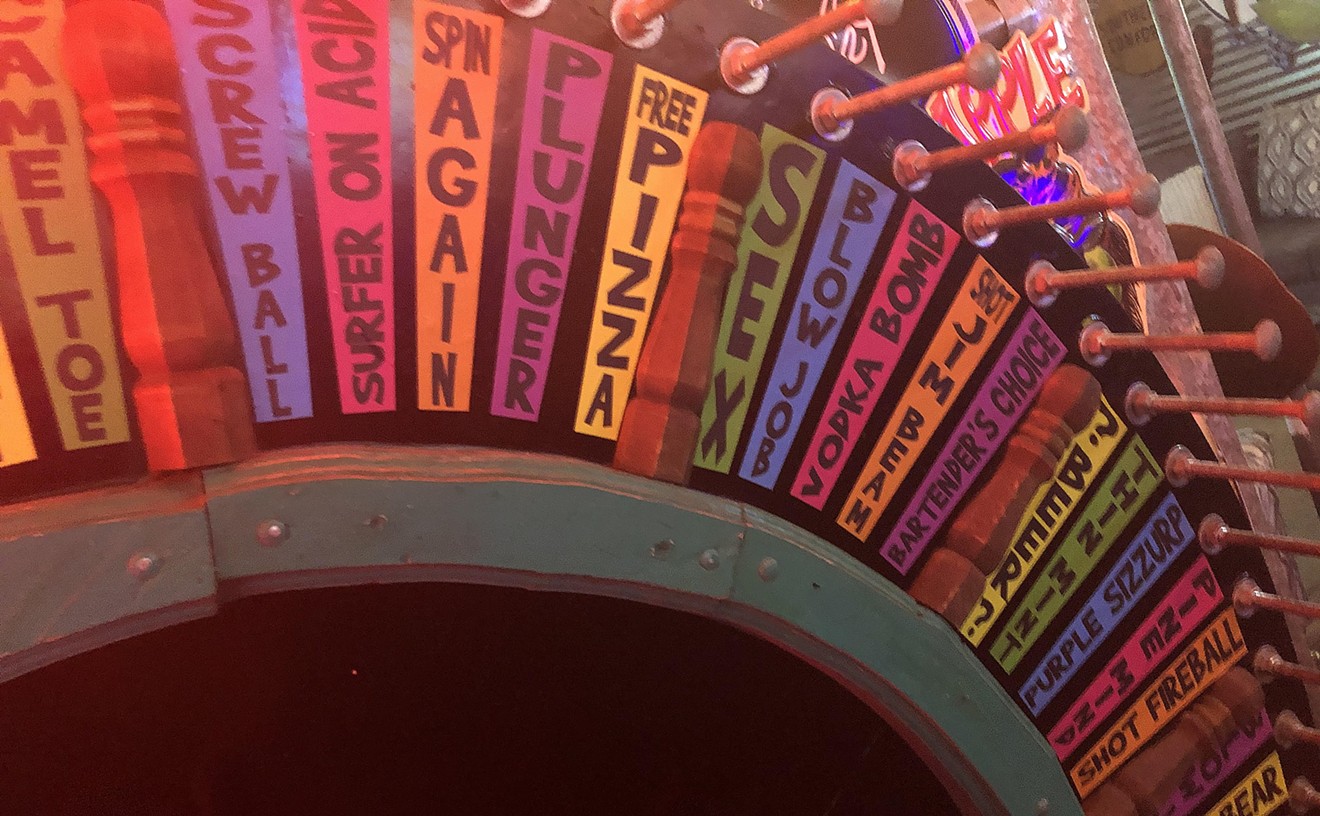 Benjamin Leatherman
Talk about best-kept secrets: Most people don't know that the popular college party bar Giligin's has a second location -- in Thailand. The Pattaya version has the same owners, the same name and the same tropical theme and Corona beer specials, but with one distinctive addition: whores! Plenty of young Thai prostitutes who, according to the Giligin's Web site, www.giligins.com, will take care of "any, and I mean any, special or freaky needs" for less than $100 a day. The site features telling pics of the bar's owners -- all protruding tongues and backward baseball caps, clutching their "hand-picked" staff of 18-to-22-year-olds. (Sure.)

It's the granddaddy of Phoenix tourist traps, but Rawhide is wearing its age well. We know it's mostly fake and corny, but, shoot, it's fun. In addition to its mainstay attractions like the cowboy-actor shoot-outs and covered-wagon rides, Rawhide has new features including a haunted hotel, a trampoline-style bungee jump, and an Old West climbing wall. If you feel like splurging, sign up for a Sundown Cookout. You'll ride into the desert on mule-drawn hay wagons, then enjoy good grub and live country music, watch Indian dancing and toast marshmallows around a huge campfire.

During the 1950s and '60s, the former B-movie queen was the most exotic thing Phoenix had to offer, a pre-Cher glamazon equally at home in the society pages or on local television, where she modeled wigs and read poetry during commercial breaks on the Late Late Show sponsored by her car dealer husband. And if you were lucky, you spotted her in the flesh, tooling around town in a pink Lincoln Continental.

Although the female star of Tarzan and the Leopard Woman has disappeared from the public eye in recent years, her legacy lives on in this fan site that includes her poetry, a photo gallery, a filmography and even a multiple-choice biography fashioned from the many conflicting stories of the "Venezuelan Volcano"'s early years. (Was she an Arapaho Indian born Burnuacquanetta -- or was she actually Mildred Davenport of Ozone, Wyoming? And did she really once attend West Virginia State College for Negroes?)

Operated by an admirer identified only as "Captive Wild Fan" -- an allusion to the 1943 flick Captive Wild Women, wherein Acqua portrays a sex-crazed native who'd formerly been an orangutan -- this is one site that will make any Acqua aficionado go ape.

This non-commercial station on the left end of the dial -- KNAI, known as La Campesina -- spent much of the '90s with a virtual monopoly on the listening tastes of Spanish speakers in the Valley. In the last three years, an explosion of Spanish-language stations has cut into KNAI's ratings, but it continues to be the Latino community's most influential voice on the airwaves. Part of a farm workers' radio network created by the late Cesar Chávez, KNAI offers a mix of news, talk shows and traditional conjunto music, and can be counted on to weigh in on the big issues affecting Valley Latinos. When protesters gathered outside the Capitol to advocate drivers' licenses for undocumented immigrants, La Campesina was there, broadcasting live. And when Chandler police rounded up suspected illegals in 1997, KNAI made the controversial action the focus of its coverage. Even as local Hispanic media grow, La Campesina stubbornly remains their political conscience.

Wig-Wearing Lady, who's been reading a Harlequin romance, just got up from her seat. Is she going to . . . ? She is! She's sitting down next to Long-Haired Sleeping Man! Now she's shaking him awake -- what's the deal? Does she know him? Or is this just another story unfolding in the cozy mystique of our favorite people-watching spot? Observing the many muted mini-dramas unfolding among the after-1 a.m. crowd in dimly lit Terminal Four is among our guiltiest pleasures. There might be only a handful of characters, but that's all it takes. Last time we were there, we watched a sexy bearded guy make a paper pterodactyl for a zombie-like mother and her three noisy kids, witnessed a fight between two polyester-clad flight attendants, and looked on as a sour-faced septuagenarian couple preached the gospel to a panhandler. Settle yourself into a reasonably comfortable black leatherette seat and just ponder and observe. There's a different cast and a different set of stories every night.

Do you know a woman who, with one phone call, will come over and rub your back, rearrange your furniture, make your place smell nice and pour hot wax in your ears? Yeah, we do, too. But Kish is a different kind of "professional." For three years, she has promptly and faithfully served the Valley's holistic needs with massaging hands that'll make you whinny with pleasure. What's more, her sixth-design-sense will help you and your home maintain an all-important harmonic balance. Get Kished and relaaaax . . .

Best Place To Hug A Hyena

Out of Africa Wildlife Park 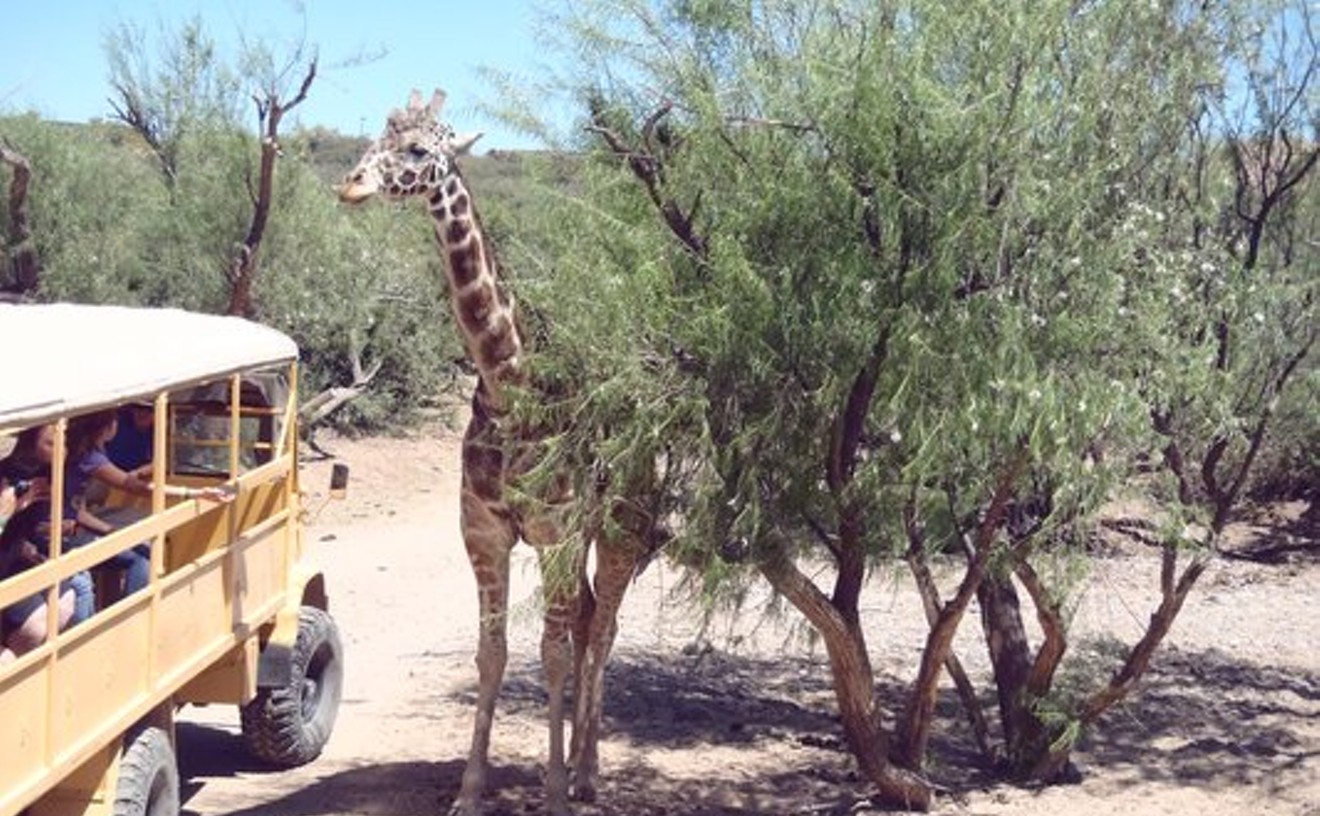 Best Place To Spend Saturday Night In Your Car

Want to watch a movie on a big screen, but you'd be pelted with popcorn if you took your squirming toddler? Hankering for a little hanky-panky to enhance the cinematic experience, but stadium seating and decorum just won't allow it? At this 25-year-old Scottsdale drive-in, you can watch the movie -- and do whatever -- without leaving your car. And if the movie's no good, the people-watching will be -- entire families set up makeshift living rooms in flatbed trucks, complete with lawn furniture, blankets and beer. The double feature is always a bargain at $5.50 per person, and kids under 11 are free. If they get restless, send 'em to the on-site video arcade. Skip the standard concession fare and pack your own picnic to enjoy this uniquely American experience. But you'd better hurry. The Scottsdale Six is one of only two Valley drive-ins left. (The other is the Glendale Nine.)