For a few hours each Friday night, Dave Valad is a star. His name is up in lights -- literally -- with a neon tube stylishly fashioned to spell his name pulsing light blue above the stage. He sings the hits -- ranging from Tina Turner to "I Wanna Be a Cowboy" to Sinatra -- karaoke-style.

He's got the moves that drive the blue-haired ladies wild. He's got the look: tinted sunglasses, a permy pompadour, and an oak-tree-style sports coat nicely tapered at the waist, his sleeves rolled up a third of the way. And his voice is like butter; each song from the tape machine he makes his cheese-filled own. He is a performer; he is in command. Think Phoenix's own Tom Jones. Plus, he has an array of brass instruments he busts out once in awhile, adding that perfectly classy accent.

His work could almost be called "accidental performance art," and he could be the analog precursor to the digital remix. As the night goes on, he finds just the right tape to transition from one song to the next, using his dual decks like a DJ spinning.

Valad is the man of the hour, every hour he's up there. And if you're really lucky, you might get a shout-out from the stage.

When you want your rock to rhyme with hawk, KDKB is your rawk station. Where do listeners with more girth than goth in 'em go to get a daily dose of what programmers call "mainstream rock," but historians more likely will refer to as "paunch rock," that brand of music that squeezes involuntary air guitar moves out of you in the middle of a sporting goods store? The best outlet used to be the classic-rock format, but since that brain trust has been infiltrated by the chick-rock sounds of REO Speedwagon, Billy Joel and Pablo Cruise, it's KDKB that's making like one of the boys -- and it's the only station on the dial with the balls to play "Fat Bottomed Girls."

It's great to have a station with an appreciation for the classics -- Hendrix, Cream, Led Zeppelin and Bad Company -- that also includes modern and alternative rock like the Cult, U2, Creed, Counting Crows and Korn, all while keeping to a bare minimum the cookie-monster rock that gives other stations their identities.

On Sundays at 10 p.m., KDKB airs the best example of specialty programming on radio, Little Steven's Underground Garage. This weekly two-hour show restores the roll to rock and is hosted by E Street guitarist and Sopranos resident grimacer Steve Van Zandt. Not only does Van Zandt retain the machine-gun verbal bazooka of yesteryear's DJs, he does American radio in general a public service by playing the Standells and the 13th Floor Elevators coast-to-coast. And for weekend warriors who still get a rush from Rush and a jolt from AC/DC, the station plays 16-song music marathons that ensure no tuneouts. Raawwwwk -- it's not just for stadiums anymore.

KJZZ figured out that people don't really have any applicable uses for jazz and blues during the workday, when alertness and coffee replace relaxation and whiskey. That's why it devotes its listening day to National Public Radio, and turns the airways blue at night with acoustic jazz. KJZZ music director (and on-air personality since 1995) Blaise Lantana has a voice that oozes comfort, weeknights from 7 to 11, when she plays her velvety mix of new jazz stars like Diana Krall and Kenny Garrett and jazz legends like Art Pepper, Miles Davis and John Coltrane. Lantana and fellow hosts Michele Robins and Ross Brotman never seem rushed to inform listeners about what they've just heard, a far cry from the automated jazz stations down the dial. On Sunday afternoons, KJZZ turns into the home of the blues with its American roots music program Those Lowdown Blues, hosted by Rhythm Room bwana Bob Corritore, who's also forthcoming with information about the origins of every song or artist so that appreciative listeners can investigate further on their own. Although radio contests are converse to this station's m.o., it could award listeners a free CD if a jock fails to back-announce.

When you're talking country, you'd better not be using "new country" and "best" in the same sentence. Everyone knows that the best country is the old stuff, and the fact that country-music record sales have rapidly slumped in recent years is a signal to Music Row that people have caught on.

Since there's no longer a reliable radio signal for picking up old country (unless you cover your body in tinfoil and point it in the direction of Austin), we recommend you try KUET-AM, the nostalgia station that broadcasts "timeless classics" out of Black Canyon City. KUET's broadcast day includes all the fundamentals of country, from back when country was cool -- Johnny Cash, Johnny Horton, Glen Campbell, B.J. Thomas, Marty Robbins and Patsy Cline. It's worth slogging through the Platters, Percy Faith and Barry Manilow just to hear the occasional Roger Miller or Bobby Bare hit.

When this old-pop-is-really-new-country controversy gets out, it'll turn country-music radio on its ear. In the meantime, you can trace where new country got its roots dyed with Olivia Newton-John, Barbara Mandrell, Kenny Rogers, Eddie Rabbitt and John Denver. Until Arizona gets a radio format that meets David Allan Coe's checklist for what makes a great country song, KUET is the best bet for hearing at least one song per hour about drinking, trucks, trains, prison or mama.

What would happen if all alternative radio stations were suddenly issued a directive not to play any more records by members of the Record Industry Association of America? That's the standard operating procedure of this Internet radio station located in Tempe, manned mostly by volunteers and college kids. Every broadcast day, it extends a big middle finger to the Library of Congress, which insists that Internet radio stations pay 70 cents per 1,000 listeners per RIAA song, as well as the 7.5 cents that regular commercial radio stations are charged -- and mandates that these fees be retroactive to 1998.

Knot Radio was started by Chris Richardson as an adjunct to his Knot Known Records label. In one stroke, he has given Tempe the credible college rock station it's been lacking for ages; it provides an outlet for local rock groups who've all been shunted off the commercial airwaves and gives them global exposure. Specialty shows range from Chris Horak's Punk, Ska, Oi, Surf, and Hardcore Show to the Blimey! It's BritPop! Show by some cat named Eddie to DJ John's Heathen World, which gives us a history of indie music of the past, present and future. Factor in other eclectic shows that feature jazz, exotica and bootlegs that somehow fall outside the RIAA's regulation, and you have alternatives that no other alternative radio station can provide because it has to play Third Eye Blind for the kajillionth time.

Knot Radio averages about 1,500 listeners a day. Lord knows how many of them are local, but one thing's for certain: They're getting freeform radio at its finest with a click of the mouse.

Pop historians say that Top 40 died years ago, when everyone went fleeing to different formats. And while that's true, it's the hip-hop stations that inherited all the energy. There's not a millisecond of dead airtime on Power 92, recently named by the Arbitrons as number-one for hip-hop and R&B in the Valley. It's a fact that couldn't possibly escape Power 92 listeners, since station IDs proudly trumpet the fact every 10 minutes.

So what's there to miss about Top 40 anyway? Hearing new music? You hear chart heat-seekers regularly; even songs in rapid repeat rotation, like Nelly's "Hot in Here," get a face-lift every go-round, especially when turntable wizards like DJ Shy are live in the mix for the "Powerworkout" from noon to 2 p.m. You want countdowns? JX3 rattles off the "Power 7 at 7." You miss crazed on-air personalities with funny nicknames? You've got MG, Mad Dog, Danielle and Gringo Suave manning the Morning Madhouse in the a.m., naughty Da Nutz carrying on in afternoon drive time, and Melissa the Midnite Mamacita playing slow jams into the dawn. And how about a station that has guest host Nuff Ced (NBA Superstar Cedric Ceballos) holding court whenever the mood strikes him? Long-distance dedications? Call 602-260-6923, and they are "Down 4 U."

BEST PLACE TO SPEND THE DAY WITH YOUR DOG

Best Surprise For The Kids

If you're the sort of parent who blows your budget on your kids' parties, consider introducing your children and all their friends to T-Bo, the rhinoceros iguana. T-Bo is one of 500 creatures kept by Rich Ihle's Reptile Adventures. For $150, Ihle will cart a truck full of snakes and lizards to your home guaranteed to drop every jaw in the joint. This is a very hands-on experience that involves lots of touching and education with a cast that includes an Argentinean Red Tegu, a four-foot-long carnivorous lizard. Other big hits include water monitors that can hit seven feet in length, 19-foot-long pythons and hulking anacondas. A walking infomercial on all things reptile, Ihle is hoping to construct a public museum in the near future. 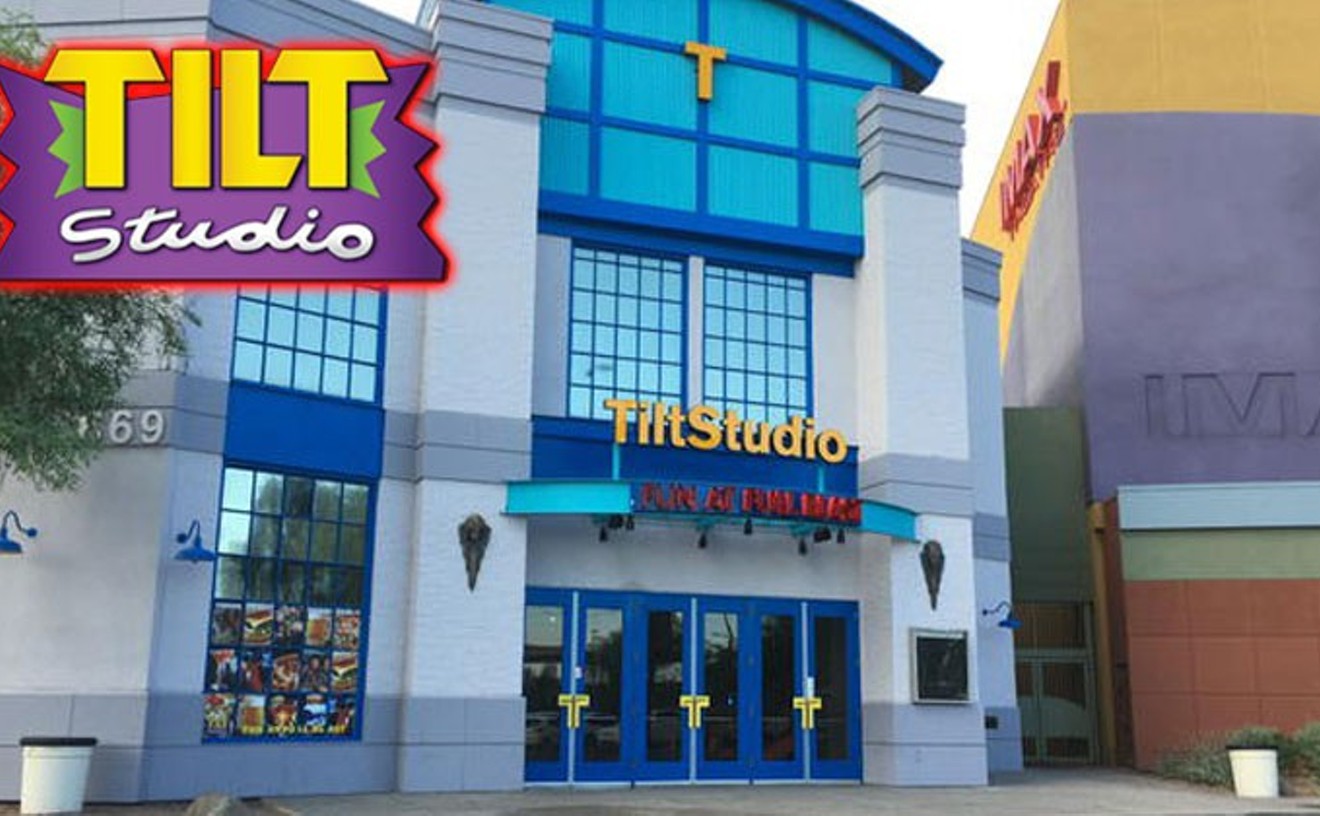 Yeah, yeah, there's more to do at GameWorks than simulate genocide. But inspired killing is the foundation of any inspiring arcade. And with several dozen of the world's most realistically hyperviolent video games, GameWorks is just about as inspiring as it gets, killing-wise.

If you tire of killing, if that's possible, GameWorks offers all sorts of other entertaining cyber realms. And yes, there are numerous nonviolent games for children if you're some sort of daisy-pickin' pacifist.

After a hard day of killing, you can retire to GameWorks' full bar and a menu of mostly excellent food. The upstairs restaurant and pub makes a nice place to hide from children asking for more money.

To stem the high cost of killing, GameWorks offers daily specials as well as reduced pricing for bulk-killing. Now, if they could only pipe in the smell of napalm in the morning.

Before he became a Valley Popsicle, Ted Williams said famously that hitting a baseball was the hardest thing to do in all of sports. Keep that in mind the next time your Little Leaguer whiffs. If you'd like to do something constructive to help your budding all-star, take the kid over to Big League Dugout, where former major league ballplayers offer individually tailored half-hour instruction for $40. Tutoring in both hitting and pitching is available. Hummmm, baby!