This boutique -- barely a chain, as there are only a couple in the country -- is the place to find distressed wood furnishings and frames, casual linen clothing and beautiful beaded necklaces, earrings and even shoes: the essentials of the Shabby Chic ethic. But our favorite find is the gorgeous, straight-from-the-estate-sale-but-these-actually-work chandeliers. Adorned with colorful metal flowers and beads, each unique fixture is a work of art. They don't come cheap, but subtle style rarely does.

We had to drive by several times to make sure of this one. Some night, if you're barreling south past Camelback on 15th Avenue, you'll see a Mexican juice and taco stand making the most out of a gleaming Arby's sign that happens to be alongside it. Where's the beef, you ask? It's hiding in enchiladas, salads, soups, tortas and tacos. Imagine the mortified old couple who stops in for a roast beef sandwich and cheese sandwich and comes face-to-face with head and tongue burritos! Now that's roasting worth boasting about!

There actually is an Arby's on Camelback -- the dubious sign is directing you to Arby's drive-through lane -- but it's half a block away, obscured in two directions by a sprawling car wash and a window-tinting shop on the corner. So, in the interest of equal time, we think the Arby's people should put a sign directing them to Jugos y Licuados' parking lot and its equally lost-in-the-shuffle La Salsita annex. Perhaps this exchange of neighboring cultures can be beneficial to both sides. Arby's can pass along those calves' feet they don't use in their Big Montana half-pounders, and La Salsita can suggest other things to serve with rice besides broccoli!

We'd given up on getting anything other than attitude from men's department sales clerks until one recent afternoon, when we stumbled into Macy's at the Biltmore in search of a new necktie. We left with armloads of trousers, a new pair of Santoni loafers and a renewed respect for retail sales help -- all thanks to Gordon Joines, whose warm, gentlemanly assistance harks back to the days when Dad shopped in finer establishments in towns more stylish than this one. Gordon manages the nearly impossible: He points us toward more and better purchases without a single sales pitch. We leave feeling like we've had a pleasant visit with an old friend who happens to have impeccable taste and a store full of menswear at his disposal. During our first encounter with Gordon, he surprised us by knowing our collar size at a glance, and astonished us by gently suggesting a cut and color that proved more flattering than the costly rag we had planned to buy. We sometimes shop elsewhere, but we never find service we like as well as that provided by this stylish Southern gentleman.

Music salespeople can sometimes get snotty if you don't instinctively know the difference between Gibson, Fender and Taylor. That's why we love Central Music. They know their stuff, but it's no problem if you don't know yours. Whether you know everything or nothing about your instrument of choice, they will help you get what you need. And they should be good at it by now -- this place has been an institution in the Valley for more than 50 years. Central Music is the musician's music store, with a fantastic selection of sheet music, on-site instrument repairs, and a great retail selection of instruments and accessories, from capos to pedals. This is the ultimate place to upgrade or start your music career, whether you're a concert pianist, a future rock star or a junior-high band member.

Just for the record, this is decidedly not a jazz town. That said, here's a tip: You don't know what you've been missing. In Europe, Japan and a few more enlightened pockets inside the States, appreciation for jazz rarely has been greater, and with good reason. It's a far fresher genre than you know, especially if you limit your listening to the pabulum on KYOT-FM and the wonderful if predictable old-school fare offered at nights on KJZZ. If you'd like to see what's really up in jazz -- we're talking such artists as Greg Osby, Cassandra Wilson and Avashai Cohen, as well as such masters as Miles Davis, Duke Ellington and John Coltrane -- head to any of the four locations of Zia Records and start digging. They've got a great selection of used stuff, with an adequate number of new CDs on the shelf. For Phoenix, that is.

Those of you who bemoan the behemoth chain stores conveniently forget the many times Tower Records has saved your ass by having the record you were looking for at the last -- and we mean very last -- minute. Sure, when you're buying CDs for yourself, you can take your sweet time shopping around and getting a used copy of a Nick Cave album at half the list price. But when you're buying your little sister that copy of *NSYNC's first album, the cool, smaller shops won't have it. What if you have to give it to her today? Even last-minute Internet enablers like Amazon.com can't get it to you the same day and, let's face it, that's when the very last minute falls.

Tower's airy new location at the Desert Ridge Marketplace has 14,000 square feet of CDs, cassettes (yes, places still carry them), videos and DVDs, plus an array of current magazines and stereo equipment. If you want to buy a Puccini CD for your dad, or that Raffi CD for your mom that she enjoyed playing more than you did, chances are it's in stock. A recent last-minute inspection to fill holes in the ol' record collection found the store carrying a dozen Hole CDs -- and six by a blues guy with the unfortunate name of Dave Hole. Their prices ranged from $12.99 to $14.99, with imports hovering just below the $20 range, besting the everyday regular price of your mark-up mom-and-pop fave.

Heck, why stop there? Check Tower's Web site to see what they have in stock; you can pretend it's Amazon and special-order a title. So cross yourself, ask your mom-and-pop outlet's forgiveness, clutch that Ziggy Stardust 30th-anniversary set that no one else in town has, and go to bed without any supper. 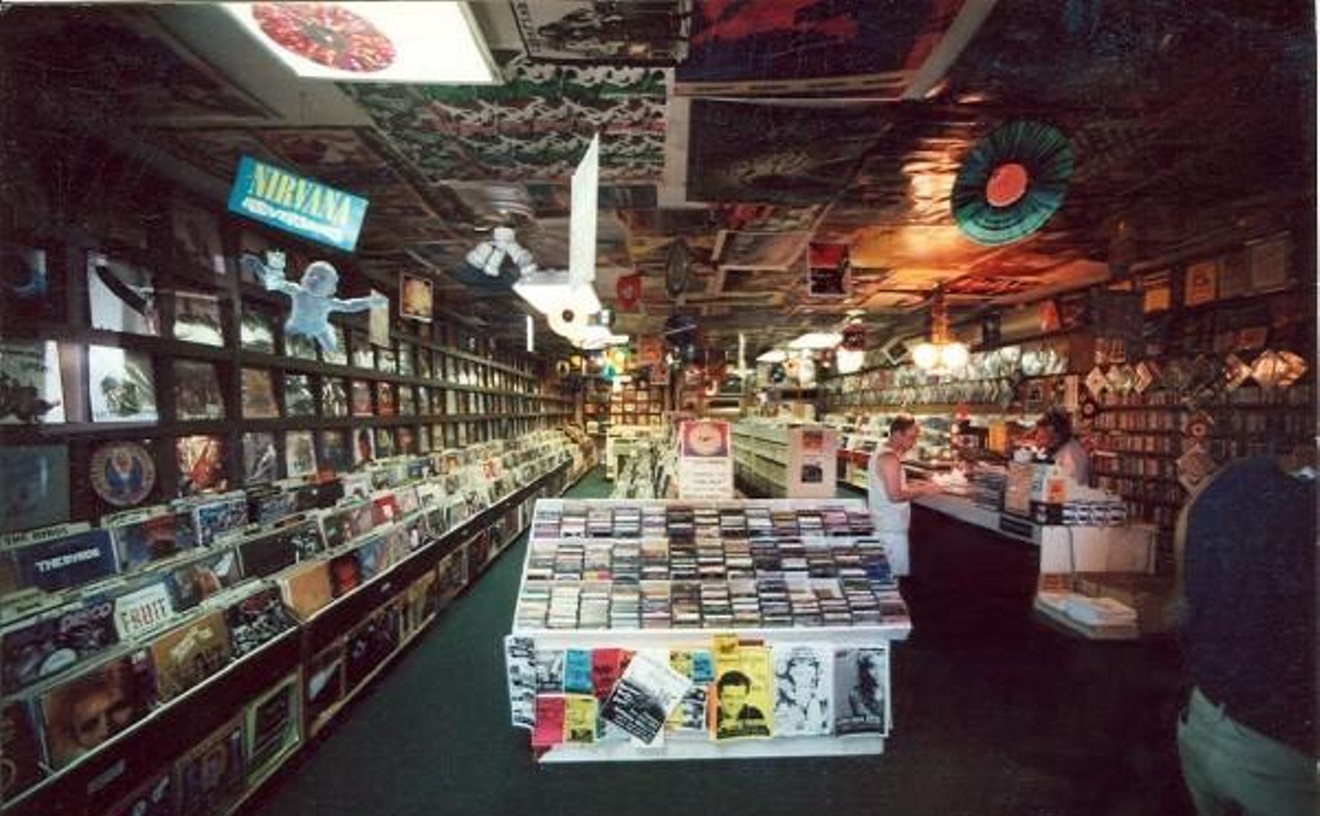 Who are the real music lovers? Some would say it's the MP3 people who obsessively download music from the Internet. This would be true if they actually listened to half the glut they burn, print labels for and file away. No, these are just people who want something for nothing -- and who are never going to listen to all that much Dave Brubeck. Truly obsessive music fans spend their lunch hours poring over catalogue books, looking for a Martin Denny or Marianne Faithfull album they might have missed, and then hunting it down.

Most hunts end here at Tracks in Wax, where Blue Book value goes out the window if an item's not exactly flying off the shelves. While the list of vinyl albums finding their way to CD continues to grow, it's never going to encompass this shop's inventory of waxworks. Where else can you get failed experiments like the Kasenetz-Katz Singing Orchestral Circus or Chuck Berry's psychedelic dalliances at the Fillmore West with the Steve Miller Band? And both are priced according to desirability, at $5.99 and $15.99, respectively.

What of the countless soundtracks such as In Like Flynt and Out of Sight that have yet to make it to CD? Usual collector staples like the Beatles and the Stones are well-represented, with a large selection of 45 picture sleeves and 12-inches from around the world. Plus, the walls are lined with treasures you've never seen, except in grainy reproductions in a Goldmine magazine, priced at considerably less than the shaft prices that publication lists them for. Not in plain view are the thousands of 45s stashed in the back, listed in two yellow-and-green three-ring binders on the counter, which rarely exceed $5, even on an original label. Plus, you have knowledgeable owners Dennis and Donnie, who've been at this locale for ages and know the kind of stuff you've collected since you were a snot-nosed runt. With sections divided into jazz, punk, R&B, and male and female vocals, it'll take mere seconds to find what you're looking for, but you'll still inevitably be late coming back from your lunch break.

Best Reason To Relax And Enjoy Your Vacation

We love to travel, but leaving behind our menagerie (four cats and an obstreperous Dalmatian) can make for tough times away. Or it used to, anyway, before we discovered Angel Pet Nanny. These bonded, insured, animal-loving pet sitters come to call as many times a day as you like while you're off traipsing, and nothing -- not even a doggy diaper or a bathtub full of baby alligators -- will scare them away. Proprietors Ginger and Lori will keep the company of most any kind of four-legged pet, and will spend at least 45 minutes per visit combing, petting, walking and bathing it. They'll also take in your mail, water your plants or scoop out the cat box -- all at no extra charge. They leave behind a meticulously detailed journal (a nanny diary, if you will) of your pet's every move and, if you want, will call you every day or leave you a daily voice mail update on your pet's well-being. We never leave home for more than a day without them.

Best Place To Get A Jackalope

If you love something, set it free; if it doesn't come back, hunt it down and have it stuffed at Ron's Taxidermy Studio. In the Valley for 20 years, Ron Cowper is a state and federally licensed master taxidermist with more than 30 years' experience. At Ron's, all work is guaranteed for life -- or for the remainder of death -- and his habitat scenes will make your kill look serene or ferocious (depending on the mood) while hanging on your mantelpiece or sitting next to your bed. Prices range from $150 for a fox half-mount to $3,500 for a life-size moose. But Ron's not limited to big game. So bring in your weasels, badgers, ducks, quails, fish, snakes and sparrows, and he'll make a trophy of what the cat dragged in. And yes, he can even make the famous jackalope. A word of warning: Never cut a deer's throat if you want the head mounted and, if possible, bring in your heads no more than two days after death.

Best Place To Find Jesus For Under 10 Bucks

The Autom store is not only a great place to stock up on anointing oil, monastery incense, rosaries and crucifixes, but smart shoppers find the real bargains with proper direction. What Would Jesus Do? He'd bypass the shelves bursting with virgins and saints and head to the back of the store. There, a cart holds large brown paper grab bags, for $3 each, and announces that 5 percent of the bags contain cash. On a recent purchase, we got lucky for a buck, as well as inundated with almost enough Jesus merchandise to redeem the entire staff. While we were purchasing the Jesus Playing Soccer figurine, the clerk accidentally broke Jesus from the porcelain playing field. This broken Jesus would be repaired, then sent to the way-back, we were told, the secret Jesus outlet portion of Autom cluttered with a hodgepodge of holiness at rock-bottom prices.