We rarely answer the costly call of movie snacks, but at Madstone, we make concessions. Boasting biscotti, imported chocolate and an espresso bar, this theater of seduction offers the substantial (turkey and Brie on sourdough) and the sweet (fresh-baked carrot cake, brownies and lemon bars from a nearby bakery). Now that we've feasted on Madstone's soft, hot pretzels, mere Milk Duds will never do. Stuffed with marinara sauce and sprinkled with Parmesan, the pizza pretzel is perfect with a bottle of New Belgium Sunshine Wheat or even a glass of Pinot Grigio. And while snackers can shake up their popcorn with special seasonings -- chocolate-marshmallow, white Cheddar or Parmesan-garlic -- we feel no need. This corn is bathed in real butter, a rare find in the cinematic sector.

BEST PLACE FOR SCOOBY TO SCAMPER 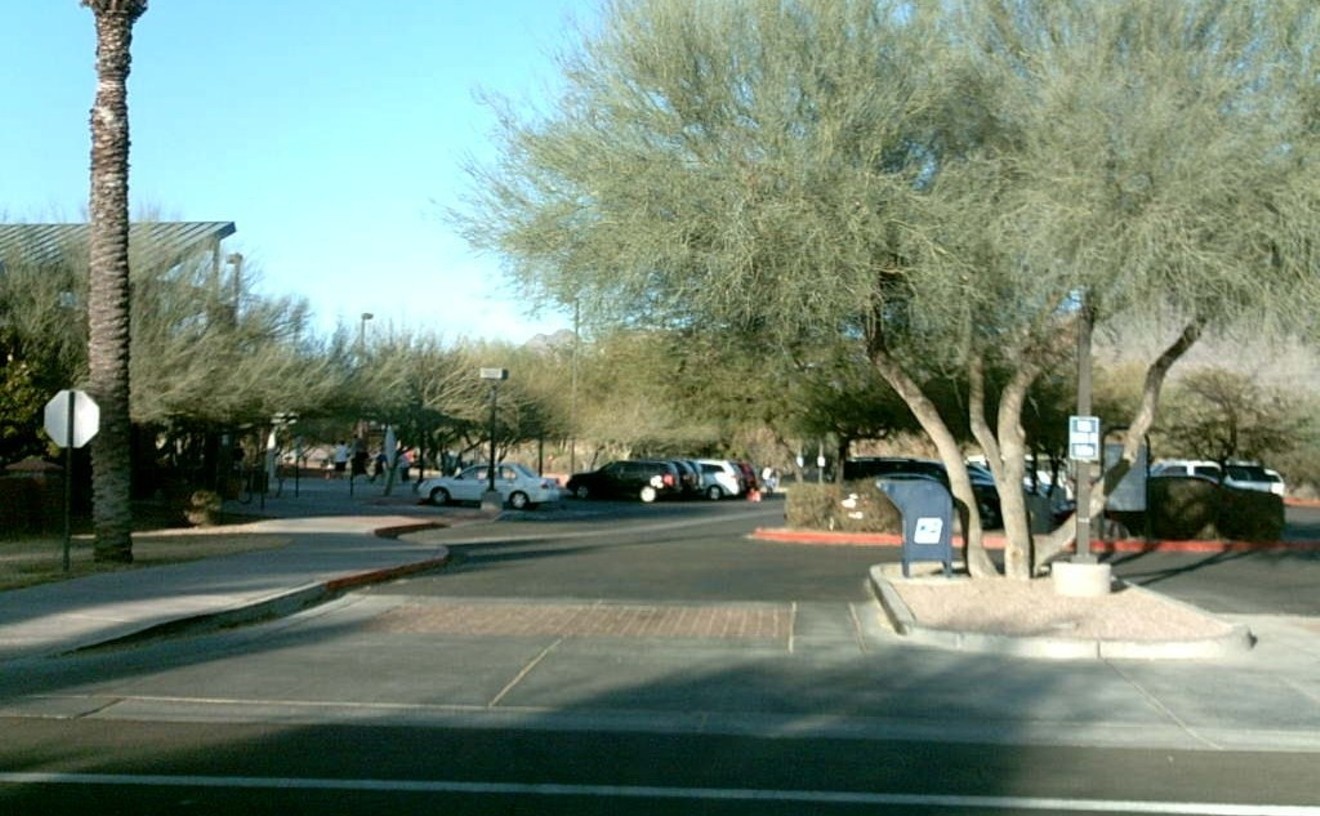 Our barker hates to park it. His energy is endless, he absolutely adores other dogs, and on weekends, when we want to take a nap, he wants to run, run, run with his buddies. So it's been a godsend for us both that the City of Scottsdale recently wised up and deemed Horizon Park a permanent Off-Leash Bark Park. Since bestowing the honors, the city has installed drinking water, and maintains a lovely fenced lawn with shade trees, benches and tables, lighting, a rest room and phones. We can let our doggy do his thing (so many butts to sniff, legs to lift) from sunrise until 10:30 p.m. Does he love it? We know he does, finally coming back to us with wagging tail, shiny bright eyes, panting tongue hanging crazily out the side of his mouth, and that sure sign of doggy-delight delirium -- his head covered in spit from the attentions of his new furry friends. We love it, too. Because when we get home, our little Cujo wants to crash just as much as we do.

BEST PLACE TO GET YOUR DOG A DRIVER'S LICENSE

Having a dog is like having a kid. We need to drive him to the vet, to the doggy park, to the groomer, and on trips out of town (he likes vacations to the forest and the beach). We have to drive to the pet store for kibble and toys. It gets time-consuming. So Fetch Doggie Store has come up with a great solution -- official driver's licenses for Fido. The application reassures us that there's no written test, though there is a warning that "some pets should not drive" (we're thinking our hamster; it's hard for his little feet to reach the pedals). All we do is e-mail or snail mail a photo of our pet, and the company sends back a realistic-looking laminated ID, designed for our state (Arizona in this case). It lists our furry friend's birthdate, sex, height, weight, hair color, eye color and class (K9). There's the people-size wallet version, a smaller one that clips to his collar like an ID tag, a key chain, and even one that fits into a tiny wallet for Rover to carry around his neck. Now, when we tell our pup to fetch, he grabs the car keys, and comes back with anything he can fit in the trunk of his shiny new convertible automobile.

"I've been fired from every job I've had and I'll be fired from this one too," Phoenix's best in-your-face television reporter says with obvious pride.

Eschewing cell phones, pagers, and, most incredibly, computers, Watkiss relies instead on his quick wit and the timely thrust of his microphone into the faces of often reluctant newsmakers.

Watkiss, with the strong support of news producer Dennis O'Neil, consistently delivers solid reporting on an amazing array of topics ranging from murders (the O.J. Simpson case) to personalities (Liz Taylor) to the sexual abuse of underage girls at the hands of Mormon fundamentalists. Watkiss doesn't mind going solo on stories, carrying his personal $5,000 video camera and doubling up as reporter and videographer in a pinch.

A Stanford grad who studied anthropology before earning his master's in journalism from Columbia University, Watkiss developed a thick skin working eight years as a general assignment reporter for A Current Affair.

Maybe that's why Watkiss is impervious to the insults, jostling and nasty comments frequently tossed his way as he cuts through the crap and delivers red meat to viewers craving some real news.

BEST PLACE TO BE A PUNK

Thanks to a local league of punks, all the news punks need to know is advertised on a Web site. And it's got so much information, we have to wonder how its creators even find time to punk (yes, it's a verb, too). There's punk mail, as in a chat room. There are punk classifieds and punk radio favorite recommendations. There's news and gossip on hot featured bands, show reviews, venues, punk-approved 'zines, even information on recording studios, and punk stores. Who'd a thunk?

BEST PLACE TO SCARE UP A GARGOYLE

You're looking for a gas mask and a taxidermied chipmunk and a ceramic candleholder shaped like a nun. Wal-Mart has failed you; even Osco doesn't carry black candles. What to do? Race for Black Hearts, where it's Halloween every day.

Open at the crack of noon Friday through Monday, this bizarre boutique is your one-stop shop for death-centric items, edge weapons, and forensic anthropology. Owner Vyle Raven-Greyv has crammed her 2,200-square-foot store with gas masks, lingerie, and original Wiccan art prints and statuary. Where else can you find an embalming table full of gravestone soap, a wall full of spiritual icons, and enough quasi-military fetish gear to outfit a kinky platoon? Nowhere but this Bazaar Noir, we assure you.

The smell of exhaust is in the air at Speedway, the Valley's premier indoor kart racing facility. Residents who feel the need for speed can burn rubber on the 75,000-square-foot track -- a challenge for seasoned racers and novices alike. The technical and four-wheel drift turns will test your skills and get your adrenaline racing. Professional timing equipment clocks your laps so you can gauge your progress.

This is a climate-controlled track, so the only heat at Speedway is the one you are competing in.

Charles Goyette is well-informed, a bit goofy and often irreverent, but that's not why he made the final cut for this award. What made Goyette stand above the madding (and maddening) crowd that populates the Valley's talk-show scene was his unexpected take on the war in Iraq. He was against it, no small deal in this neck of the woods, where rational political dissent is viewed by many as some kind of traitorous weakness that ought to be punished by banishment or death. Oddly, Goyette is a dyed-in-the-wool conservative who considers himself a standup Republican. Goyette's once-loyal listeners called him every name as he steadfastly questioned the U.S. invasion of Hussein-land, including that nastiest of epithets -- liberal! But he stayed the course through his own perilous fight, and for that we give him our own little medal of honor.

We already have our Valentine's Day mapped out for next year. We're going to rent the "Bomber Boudoir" and take our sweetie on a trip to the clouds. The BB is a private plane owned by a local doctor, and he takes couples on flights 1,000 feet above the Valley (hint: sunset is awesome). The plane is a funky propeller-driven Beech AT-11, and includes a bubble turret and a Plexiglas floor for earthly views. It also includes a fake machine gun, such fun for our guy. The flight is a bit expensive -- $900 an hour (for up to six couples if we're kinky), and includes champagne, roses, fruit and chocolates. For privacy, the pilot pulls a curtain to separate us from his cockpit. Hmm. Puts a whole new incentive into joining the mile-high club.

BEST USE OF TAXPAYER MONEY

In a time when most of our tax dollars go into things we can't use (like corporate loopholes and kickbacks), the City of Gilbert has built what is by far the best rec center in metro Phoenix, and offers its use to all Valley residents for a fraction of what it costs to work out anywhere else. At only $2.50 a day for Gilbert residents, and $3.75 for others (there's even a family rate), the 50,000-square-foot center boasts a climbing wall, four racquetball courts, a huge gym, family locker rooms, killer steam room and sauna, pool tables, aerobics rooms, and Ping-Pong. There are lessons in tae kwon do, aerobics, and hip-hop dance, kids' movement classes, and summer camp programs of various types. And a fully supervised day care, also at a great rate.

But the crown jewel of the place is the elevated race track. Set inside the nicely air-conditioned building, about 30 feet above ground, the track looks out on a spectacularly huge window, providing a rather inspiring view as you work out.

Monthly, six month and annual passes are available, and Gilbert businesses can get a corporate discount.