With Pho Bang being a perennial winner in this category, you might get the impression that there are no other Vietnamese joints in the Valley. Wrong again, beef-ball breath! There are actually Viet eats aplenty to be found throughout greater PHX, but Pho Bang overwhelms the competition with a massive menu and the most consistent and authentic Southeast Asian foodstuffs on offer. Let's be honest, though. Folks ain't going there for the interior decoration, which could easily double for a Vietnamese bingo hall: plain tables and chairs, beer ad posters, and the occasional, extra-crusty Best Of award from years past. It's the cheap, kick-ass bowls of pho, the jumbo shrimp spring rolls, and the crisp, crunchy egg rolls that draw diners like paparazzi to a Michael Jackson court appearance. And as far as celeb endorsements go, there's William Hung, who, unbeknownst to the judges on American Idol, was actually singing "She Pho Bang" during his tryout. Great product placement, guys! Readers' Choice: Cyclo

BEST LOCAL EATERY WE WISH WERE A CHAIN

Jamie Peachey
Okay, so maybe it's not the most healthful food on the face of the planet, we think as we espy the opened can of Crisco sitting in the Fry Bread House's kitchen, but then it's not exactly as if Popeye's or Taco Bell serves diet food. Anyway, we'll put FBH's palate-pleasing puffs of flour, salt and shortening up against any fast food, anywhere, any time. Not only is FBH's fry bread outstanding when topped with honey and powdered sugar, but it can make for a hearty, rib-sticking meal when paired with beef stew or when used as a taco with chorizo, beans and lettuce. So why aren't there scores of Fry Bread Houses across the Southwest, and perhaps, even, the nation or beyond? If there are any aspiring Donald Trumps out there with the means to make it happen, what are you waiting for? Get on the stick so that by this time next year, Tokyo will be opening its own FBH and the Japanese can at last enjoy the culinary delights of fried dough. Then after Japan, it's on to China, India, and finally, world domination . . . 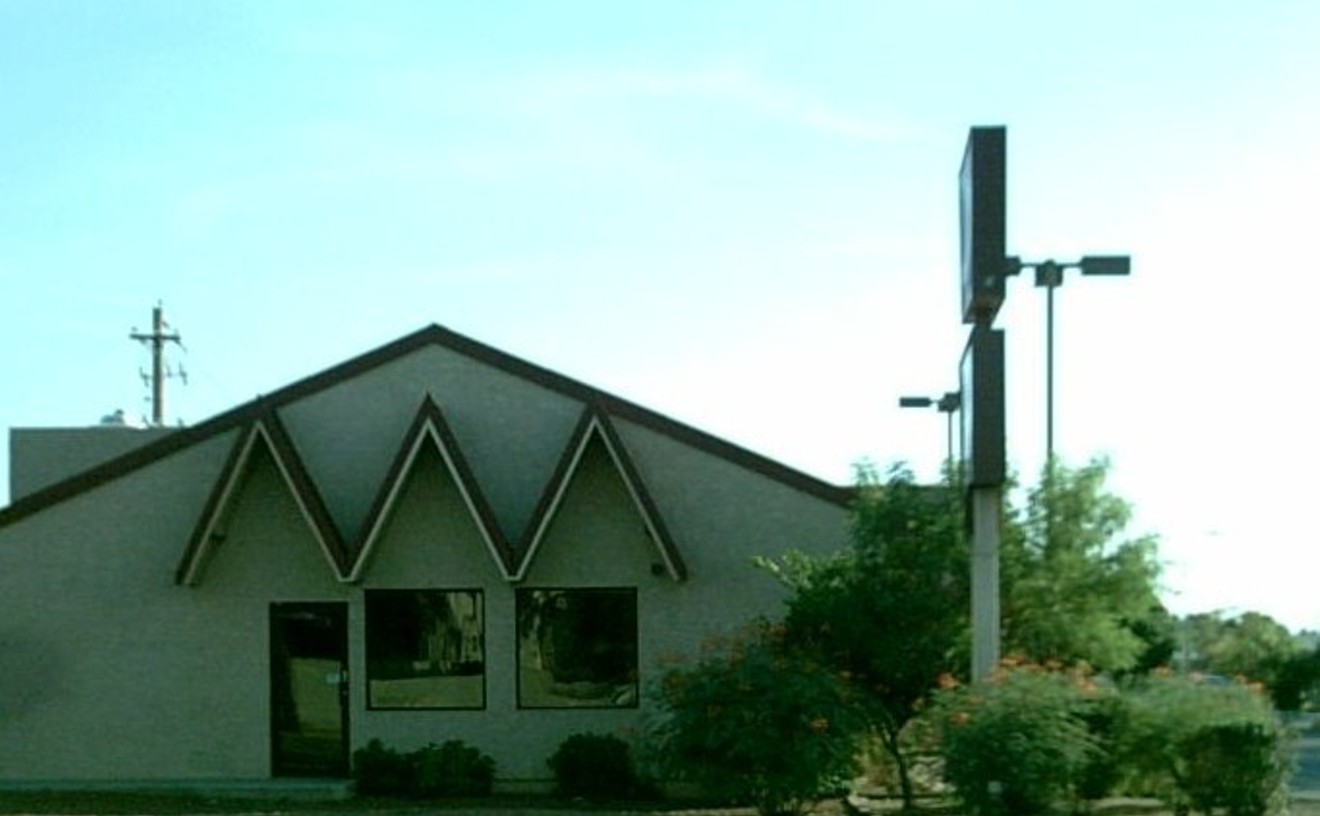 For Thai purists, there's no better place for Siamese cuisine than Thai Rama, which has resisted the mainstreaming of Thai food that some places have championed. Nothing wrong with experimentation, of course, but we like our Thai restaurants to be an echo of old Bangkok, with Thai embroidery on the walls and classic dishes that taste the way Thai Rama makes them, such as pad Thai, chicken satay, and red, green or yellow curry. The Thai iced tea with cream is exquisite, and while you sip it, you can peruse an extensive menu of entrees and appetizers unrivaled in the Valley. The angel wings -- chicken wings stuffed with pork and slathered with chili sauce -- are as good as anything you'll be served in L.A., the cashew duck will have you quacking with delight, and the kaeng kung, or shrimp curry with coconut milk and bamboo shoots, will have you singing "I'm the King of Siam," ˆ la Yul Brynner. As for Thai Rama's coconut ice cream, it's thicker and sweeter than Hollywood cutie Lindsay Lohan in a tank top, albeit with slightly smaller scoops. Readers' Choice: Malee's on Main

Psst. Hey, buddy, smell our hands. No, it's nothing gross, we promise. Just take a whiff. Know what that tantalizing fragrance is? That's the smell of Korean barbecue, and if there was a way to bottle it, we'd rub ourselves down in it from head to toe, but Chanel is still working out the kinks in its Eau de Beef cologne. So until they get that down pat, we'll just stick to our favorite Korean barbecue restaurant, Tempe's Seoul Garden. Seoul Garden was formerly known as Korean Garden, an establishment that had been in business for more than a decade. Then owner Sarah Kang came along and, with the help of her sis Missy, revitalized the food and the service to such a degree that it's now our favorite place to partake of Korean barbecue. That's where you grill a big platter of marinated meat, whether it be bulgogi beef, chicken, pork, or something slightly more exotic, like pork tongue. Once the animal flesh of your choice is properly grilled, you wrap it in a lettuce leaf, add some rice, kimchee, or any of eight or nine pickled sides, pop it in your kisser and wash it down with generous amounts of Korean OB beer. There are lots of other items on the menu: savory Korean seafood pancakes; dumplings, steamed or fried; or bi-bim-bap, veggies, rice, beef and eggs in a bowl. But only with the barbecue do you get your hands to smell like freshly seared beef. That's our idea of heaven. Readers' Choice: Seoul Garden Korean BBQ Restaurant

Longtime fixtures on the Phoenix culinary scene, Tom and Chrysa Kaufman have created a low-key restaurant that winks at Western kitsch. From the Mexican kitchen altar to the Lon Megargee prints on the wall, the art is nearly as sly as the gourmet dishes posing as comfort food. 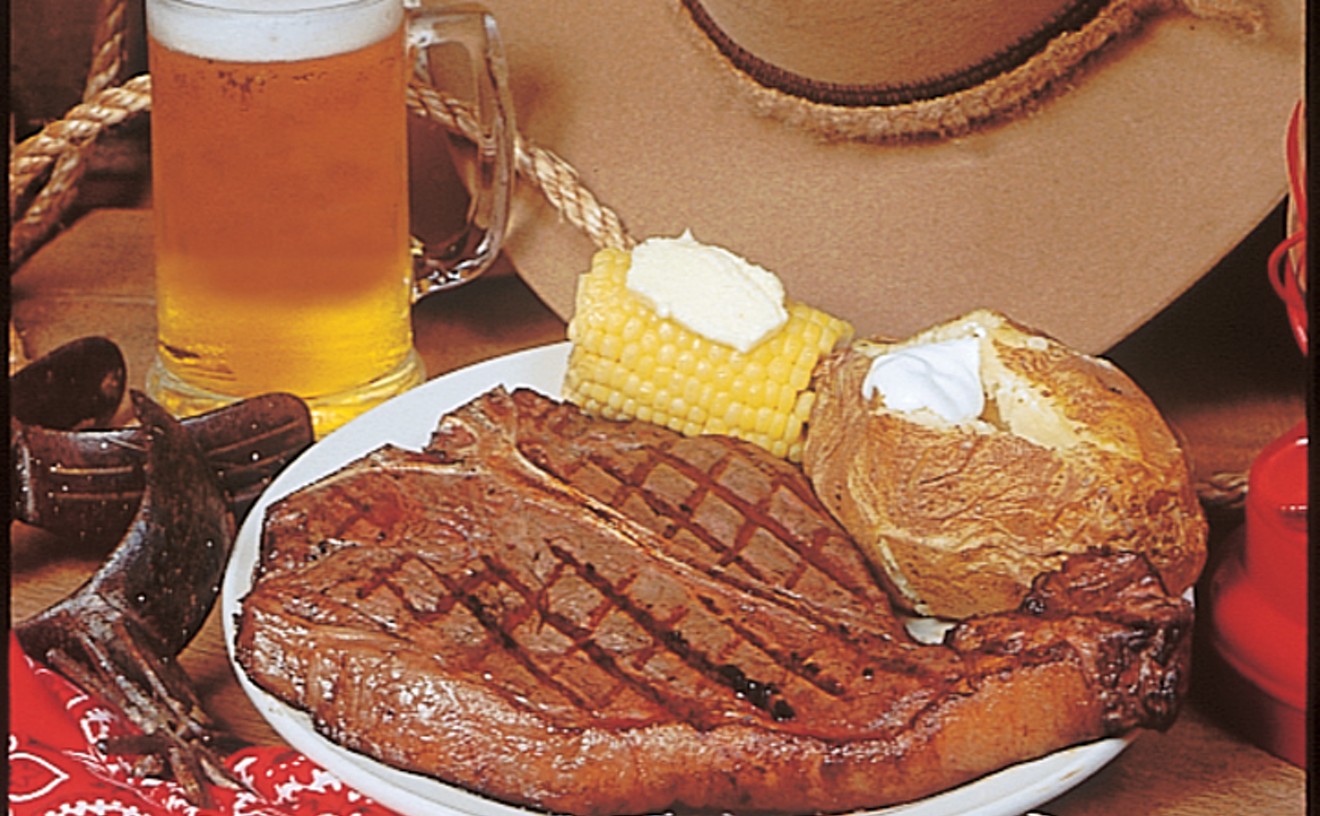 Courtesy of Pinnacle Peak
So just what the hell is "authentic Arizona" cuisine? Roasted javelina with a prickly pear salad and a side of chopped roadrunner liver? Hmm, come to think of it, that doesn't sound half bad. But until some gifted chef realizes our twisted culinary vision, we'll stick to Scottsdale's Pinnacle Peak Patio, which serves porterhouse steaks you can use as doorstops and bowls of cowboy beans that call to mind that infamous campfire scene from Mel Brooks' Blazing Saddles. (For those of you who haven't seen it, think "musical fruit.") The remainder of the menu you could fit on a napkin: burgers, ribs, corn on the cob, and a slice of apple pie á la mode for dessert. The ambiance is, well, rustic, with sawdust on the floor, red-and-white-checked cloths on the picnic tables, wooden benches instead of chairs, and old-fashioned kerosene lamps made of pewter. The only modern decor hangs from the roof beams -- a field of neckties cut from the collars of any who dare defy the management's long-standing No Necktie Policy. Since it opened in 1957, the Triple-P has hosted stars such as Joan Crawford, Jane Russell, Paul Newman, George C. Scott, and our favorite, Wayne Newton, as well as tons of ordinary folks hungry for a taste of the Old West. But would it kill 'em to put a little javelina jerky on the menu? Sheesh.

Evie Carpenter
Would you like to be under the sea, in an octopus' garden, in the shade? All apologies to Ringo, but that's the first thing that comes to mind upon descending two floors into the ground to the nautical-themed, wood-paneled dining rooms of Scottsdale's renowned Salt Cellar Restaurant. Well, it's either that, or the last time we watched Sealab 2021. There's something about taking a meal in this odd, partly subterranean structure that's akin to supping with Doc and Captain Stubing on the Love Boat. But the Salt Cellar isn't all atmosphere. Au contraire, this is the premier seafood spot in the Valley, with everything from Alaskan king crab and turtle soup to Maine lobster and blue marlin, all flown in daily from around the world and so fresh you can almost smell the spray of salt air as your waiter brings you your order. Moreover, the interior is elegance defined, with white linen, candlelit tables and spotless silverware, and the service is superb. What else could you ask for in a seafood place? Well, a half-hour back rub from the manager would be nice, but we're not holding our breath. Readers' Choice: Salt Cellar Restaurant

Jackie Mercandetti Photo
The Welcome Diner is such a quaint little place, painted white with red trim on the outside, that it looks like Matchbox made it and you could pretty much pick it up and stick it in your pocket if you wanted. The interior is essentially a short-order kitchenette and a red counter surrounded by nine -- count 'em, nine -- blue stools in a space that's so tiny we have to grease our love handles with lard to get to the stool in the far back. Well, people were a lot thinner back when this lovingly restored 1930s eatery was in use. (They didn't call it the Great Depression for nothing, boyo.) And it's worth greasing our pear-shaped hips for one of chef Peter Deyo's egg sandwiches, hot dogs, burgers or BLTs. For dessert, his deep-fried fritters are a must, but with all that powdered sugar on top of them, just how the heck do you expect us to squeeze out of that dainty diner? Pork fat can only do so much, people. Guess that's why the W.D. has a to-go window, huh? 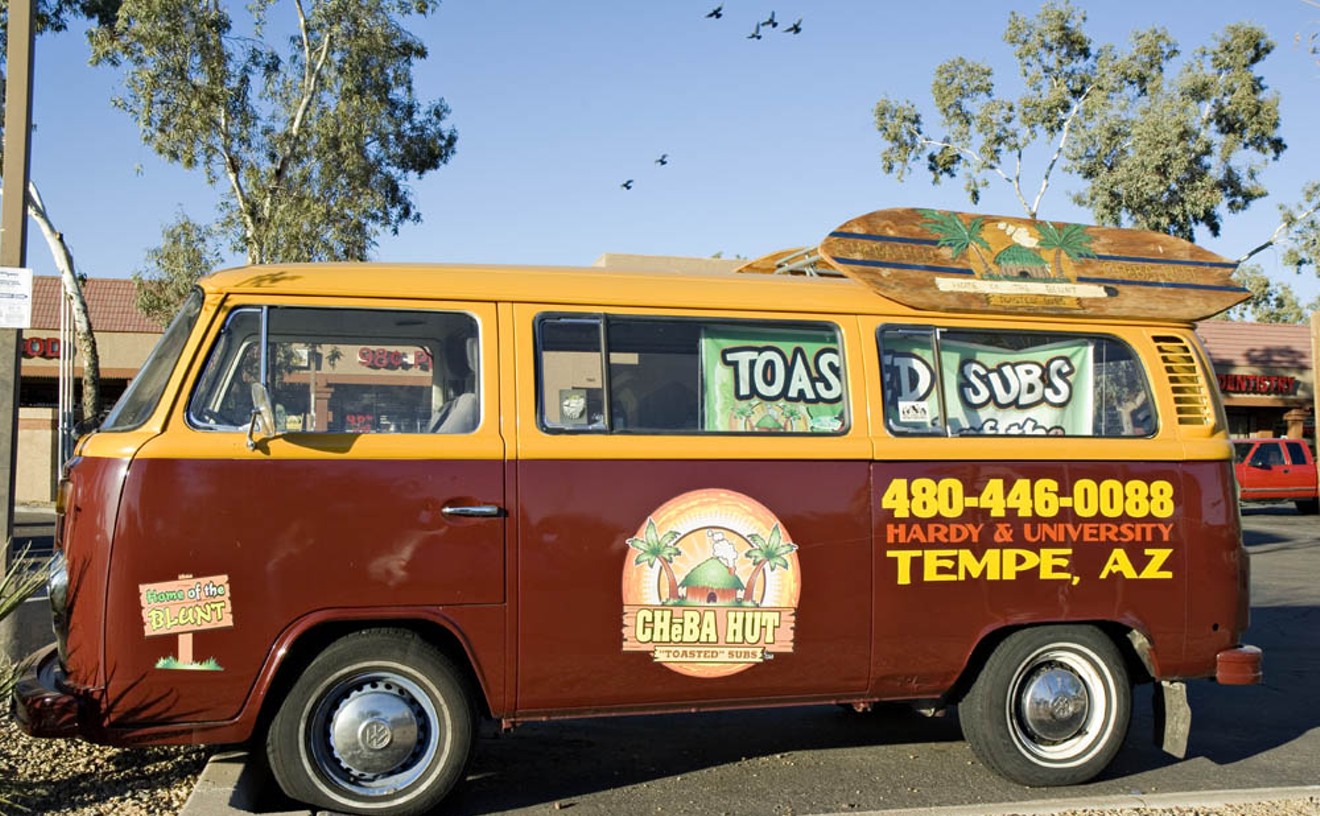 Jackie Mercandetti
When we're not at home watching Aqua Teen Hunger Force with a bong full of Humboldt County's finest, you'll find us in Tempe enjoying a chronic blunt at Cheba Hut Toasted Subs. See, Cheba Hut calls its sub sizes nugs (4-inch), pinners (8-inch) and blunts (12-inch), and "chronic" is the name for a barbecued-beef sub. Thus to the staff of Cheba Hut, a "chronic blunt" is something you masticate rather than inhale. Other smokin' sandwiches include Jamaican red (spicy grilled chicken), magic mushrooms (portabella mushrooms with Monterey Jack cheese), and Dr. Dre's fave, the Endo (essentially, a classic Reuben). A case of the munchies can also be addressed with Cheba Hut's homemade Rice Krispies bars, or the deliciously moist hemp brownies, the hemp part essentially consisting of seeds sprinkled on top. Cheba's motto is, "Where the only thing fried is the occasional customer." So, not surprisingly, the walls are decorated with plenty of pothead memorabilia such as giant (and, alas, fake) spliffs, Grateful Dead posters and the like. One wonders who Cheba Hut's celebrity spokesperson should be. Woody Harrelson? Whitney Houston? Snoop Dogg? Our pick: Towelie from South Park, who's always saying, "Anybody wanna get high?"

Though there are a number of great Mediterranean restaurants in the Valley, sometimes you have to give it up for the newbie, and that's the way we feel about Efes Turkish Cuisine in Tempe, which has been open for less than a year. Efes is Turkish for Ephesus, that ancient city of Roman ruins and Christian shrines, and the name evokes the mystery of foreign lands, as does Efes' traditional Turkish decor, its colorful rugs and pillows, and its good-luck charms to ward off evil, shaped like large, blue eyes. The menu is equally enchanting, with spiced and marinated chicken and lamb kebabs that are juicy and savory, and stuffed grape leaves that are as plump as Cuban cigars.

True to the Turkish palate, Efes offers about a half-dozen ways of eating eggplant, perhaps the most delightful being the imam bayildi, or baby eggplants filled with tomato, onion and peppers. The arnavut ciger, a dish of seasoned, fried cubes of calf liver, is outstanding, as is the very non-Turkish cheesecake, made extra-fluffy by the addition of ricotta, and flavored with a touch of lemon, orange and vanilla.

If we never make it to Istanbul, at the very least, we'll always have Efes. Readers' Choice: Taste of Mediterranean Restaurant