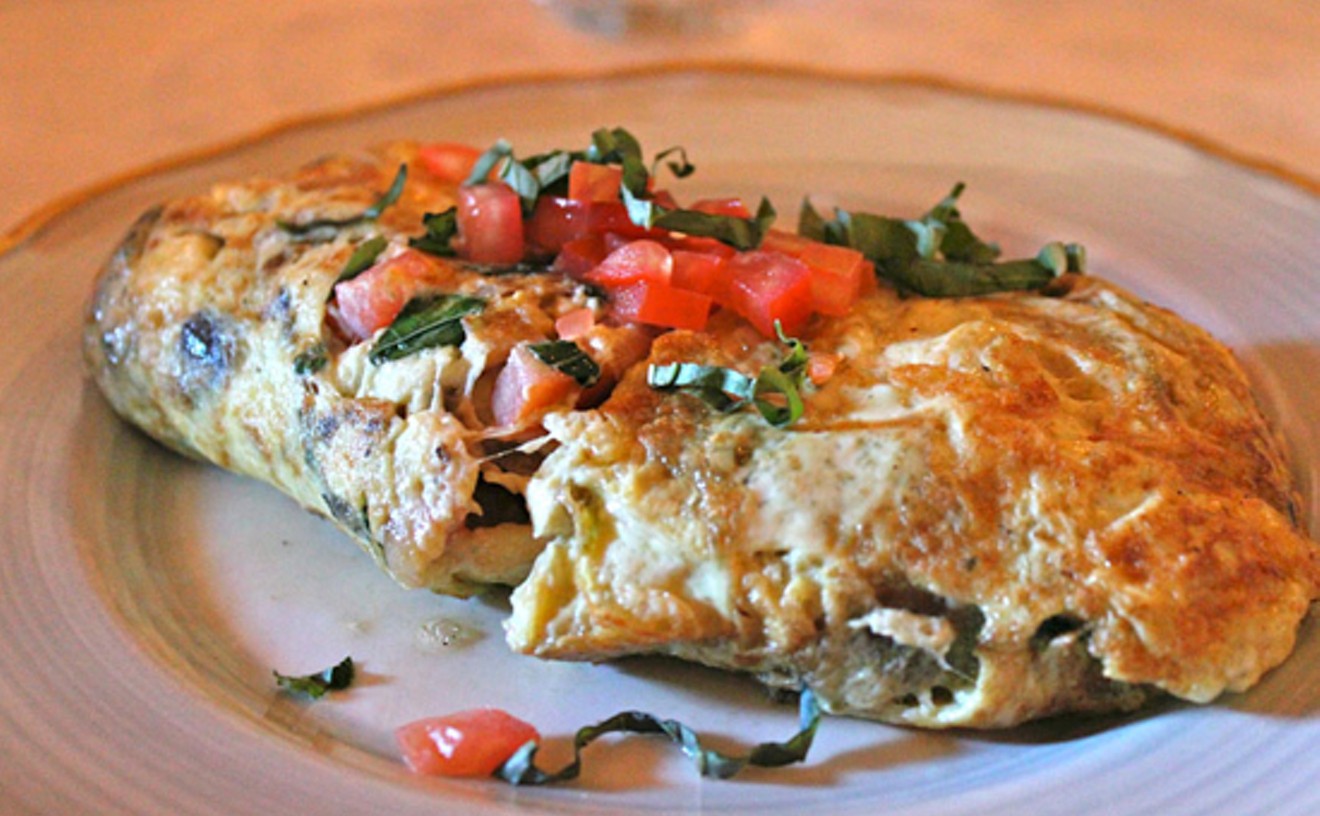 Lauren Saria
The ratatouille omelette at Vincent's Market Bistro.
We had just settled into a comfortable chair at a perfectly appointed table at Vincent's one recent afternoon, when we almost spat out our tap water. We're well-accustomed to the concept of the dessert cart, but the water cart? Sure enough, here it was, wheeled with as much pomp as the tarts and cheesecakes -- except on it sat a dozen or so varieties of water. "Sparkling or still?" the waiter asked, running down a list nearly as long as the restaurant's wine selection, and just as complicated. We ordered a Diet Coke instead, but sat back happy, relieved to know that even during one of the worst droughts in our city's history, Vincent and his water cart are here to parch our well-heeled thirst.

Phoenix is full of frickin' wing nuts, and we don't mean the kind who have pinups in their garage of Vice President Dick Cheney buck nekkid on a bear rug. Instead, the Phiddy (i.e., Phoenix city) is wing-nutty about those defeathered and deep-fried chicken appendages, which everyone from Long Wong's to highfalutin chop houses peddle. We've eaten so many chicken wings in this town that we've taken to bobbing our heads and clucking every time someone scrambles an egg. But for our scrilla, no one in the Big P. beats Bobby C's Lounge and Grill for the biggest, meatiest, most satisfying Buffalo wings, just orange enough from the spices to make you think those fryers were Baltimore orioles. These come with a tangy-ass sauce in which to dip them, though as big as these are, you may need a bucket instead of the normal condiment container. Our preferred drink, with wings or anything else? Grape Kool-Aid on the rocks. Can't beat it with a drumstick. Readers' Choice: Native New Yorker 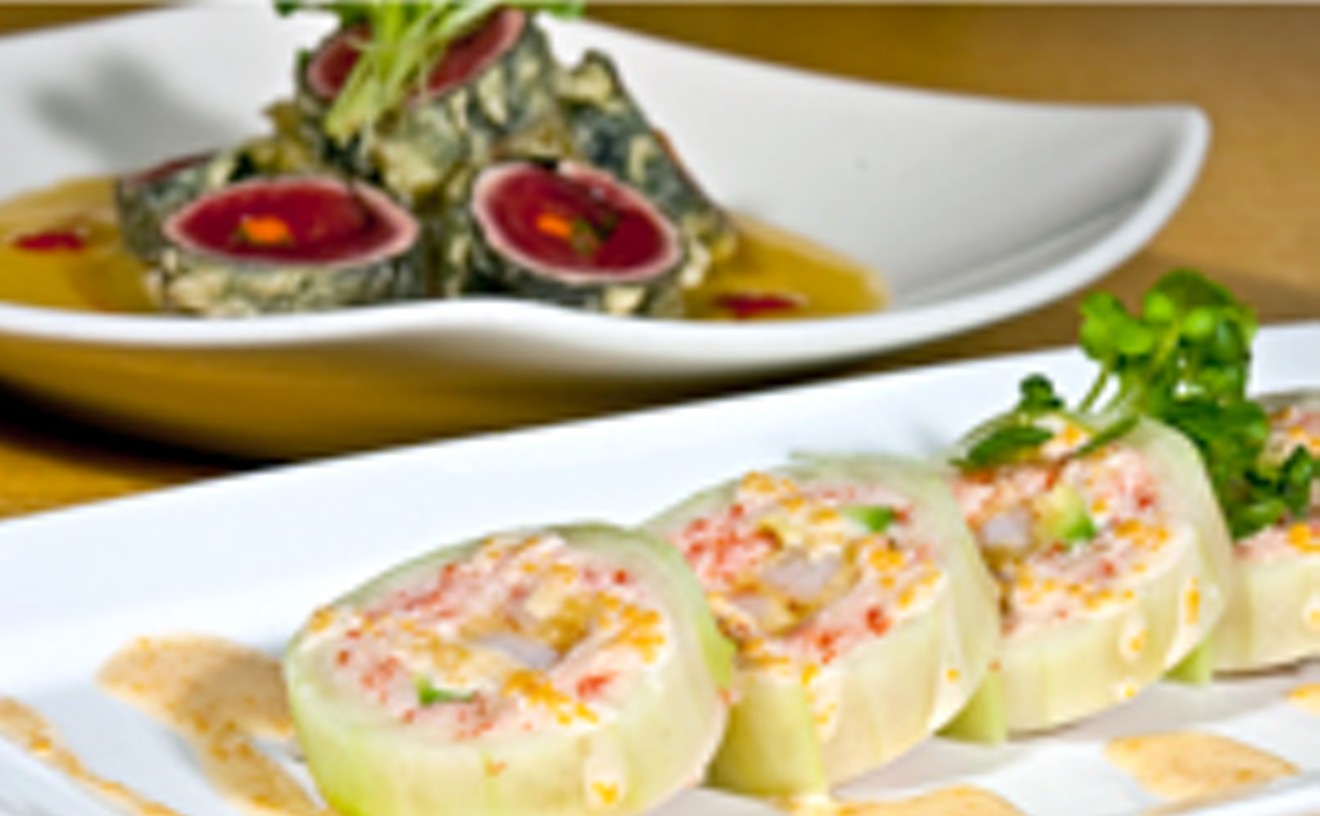 Meagan Simmons
Most people think the key to a perfect chicken salad has to do with the chicken. Most people are wrong. It's the lettuce. We don't really care what kind of lettuce you use, but it must be finely shredded. Not too fine, just make it about the consistency of coleslaw. Kona Grill has that down pat, and it tops the salad with macadamia nut chicken, a handful of crunchy noodles and a very light dressing. Perfection.

Why is something so apparently straightforward as a Caesar salad so difficult to obtain these days? The classic dish, invented in Tijuana, Mexico, in 1924 by Italian restaurateur Caesar Cardini, should ideally be tossed at tableside, using fresh romaine, grated Parmesan, croutons, a dressing made with lemon juice and Worcestershire sauce, and sometimes anchovies, either on the side, or ground into the sauce. Good luck getting it tossed at tableside in the 21st century, or even with romaine, instead of its ubiquitous and horrid iceberg cousin, the bland bane of foodies everywhere. Usually what you get in restaurants is some bizarre variation on the original, with anything from nachos and corn to seared ahi and "Southwest-style dressing." (Blech!) The one place in the Valley that you can rely on to deliver a solid Caesar is Durant's, the dark, red-velvet-lined chophouse, which since 1950 has fed everyone from John Wayne and Marilyn Monroe to the late senator Barry Goldwater, and the still-kickin' Senator John McCain. At least Durant's uses romaine, and the waiters won't look at you funny if you ask for anchovies. Is that so much to ask from other eateries, we wonder? Apparently so. Readers' Choice: Oregano's Pizza Bistro

We slither all over the Valley, looking for the very tastiest snails -- and always leaving a moist, weary trail of disappointment behind. Or at least we did, until Gregory's World Bistro began serving its mind-bendingly delicious escargot phyllo purses. There's nothing freeze-dried about these garden bandits, which are wisely served with tender wild mushrooms and spiced with tasty basil pesto, then swaddled in garlic butter and wrapped in a teeny clutch of phyllo. At only 10 bucks a pop, we're tempted to make them an entree. Usually, we settle for pairing them with Gregory's seared foie gras and a glass of Pinot and calling it supper.

We confess that we dine at My Florist Caf almost more often than we do in our own home, in part because we find its version of comfort food so, well, comforting. And we're profoundly comforted every time we dip into a plate full of My Florist's tasty baked oatmeal. Who knew that rolled oats, brown sugar, and a pinch of nutmeg could make for such a flavorsome, almost dessert-like breakfast food? Topped with sour apple slices and swaddled in a tart, creamy yogurt sauce, this is a morning meal that puts the rest of the day to shame.

My Florist's baked oatmeal is even better than Mom's. Or would be, if Mom had ever made the attempt.

BEST POOL TO TAKE A DRINK IN

Resort life can be harsh. First, there's the decision of which one of six pools to swim in. Then, there's the tough call of which one of eight restaurants to dine at. And finally, we've all suffered the travails of finding a good tropical drink by the pool, without having to drip-dry across the courtyard to get it. Luckily, the JW Marriott Desert Ridge caters to convenience. You don't even have to get out of the pool. Just swim on over to the Just A Splash Pool Bar & Grill and order a fuzzy navel or a pia colada. The bar specializes in tropical drinks, but it's got grub, too, including burgers, pizzas, salads, hot dogs and sandwiches, which begs the question: Does the "wait 30 minutes after eating" rule apply if you're already in the pool?

We love fancy hotels, but we don't like getting gussied up, particularly on a Sunday morning. That's why the brunch at the Hyatt's Squash Blossom is so perfect. No one expects you to dress up. Oh yeah, and don't get us started on the food. Well, since you asked, we recommend that you starve yourself all day Saturday, because this is a serious pig-out. Along with the piles of fresh fruit, omelets cooked to order and mounds of baked goods, the Squash Blossom offers both paella and Caesar salad stations, as well as carved meats.

Loosen those sweatpants, and belly up to the omelet bar. Readers' Choice: The Phoenician

If the Pink Pony were a big, nasty redhead, we'd plant one right on her over-lipsticked kisser. You see, so much of what passes for the restaurant industry in this Valley of pawnshops and palm trees is so corporate and lacking in class that the historic Pink Pony looks better the longer we dwell here. Blimey, the Pink Pony's been around since Truman was Prez, y'all. Now that's history. Moreover, the Pink Pony has served such baseball legends as Joe DiMaggio, Ted Williams, Willie Mays and Billy Martin. The place is a veritable shrine to the game of baseball with framed jerseys from the likes of Sammy Sosa and Gene Autry. And its late owner Charlie Briley was instrumental in bringing the Cactus League to the Valley. But even if you know as much about America's Game as a hedgehog does about rocket science, the Double P should still appeal to you, assuming you have an ounce of style in your corpus. Just pay a visit on a Friday or Saturday night, ease into one of the slightly worn, black vinyl booths, order a stiff drink and a fat steak, and chill like Joltin' Joe did in the day. By the time you make it to your second cocktail, the lounge singer will be halfway into a finger-poppin' version of "Mack the Knife," and it'll be like you slipped through a wrinkle in time.

BEST PLACE FOR A TWILIGHT DRINK 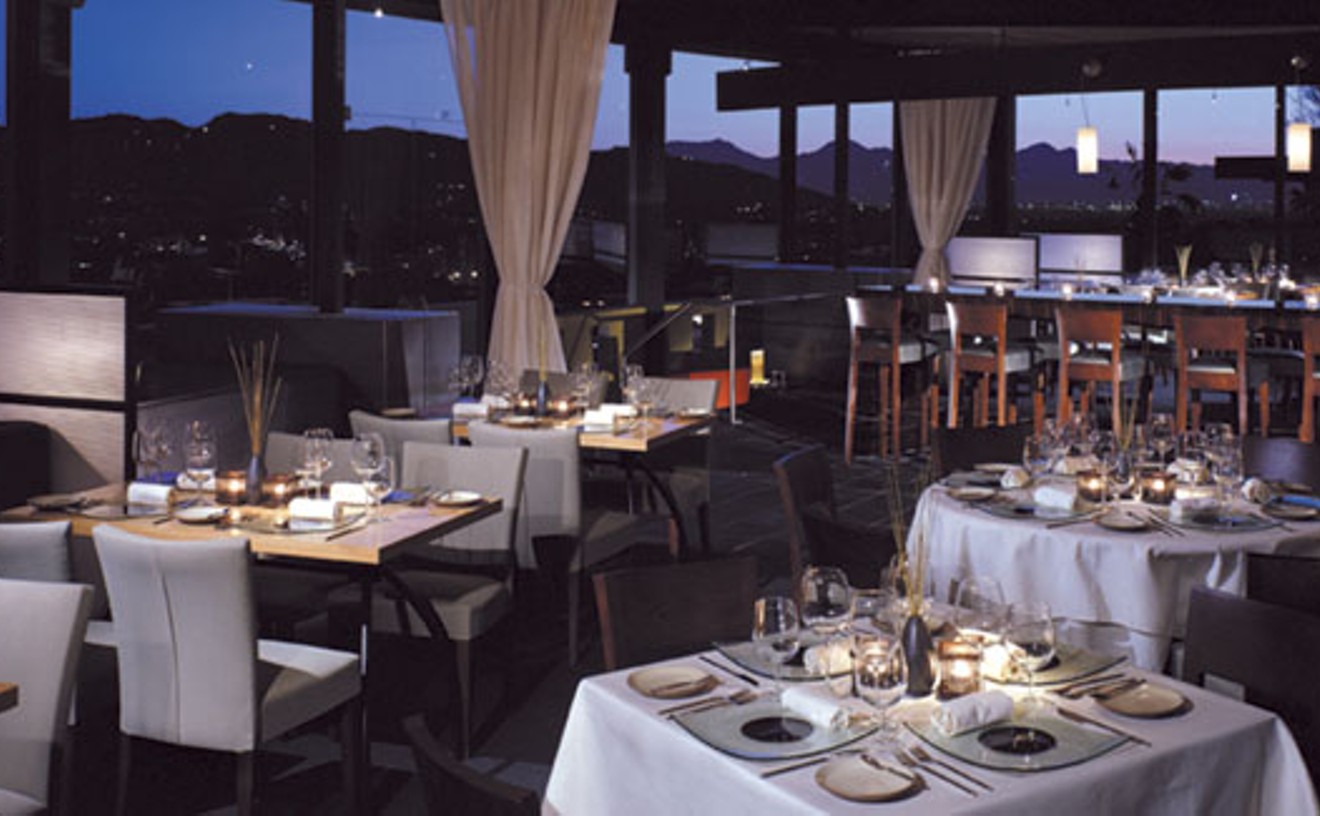 We love the drive up to Sanctuary, the super-chic hotel nestled up against the north side of Camelback Mountain, and we love the fiery hot wasabi nuts they serve in the cozy bar. After a cocktail or two at elements, the beautifully arranged bottles behind the bar twinkle, particularly at twilight. Or maybe it's just the cocktails. Either way, this is a perfect spot to end the day, just a short drive to either downtown Scottsdale or the Biltmore.