BEST PLACE TO TAKE A NEW YORKER FOR DESSERT 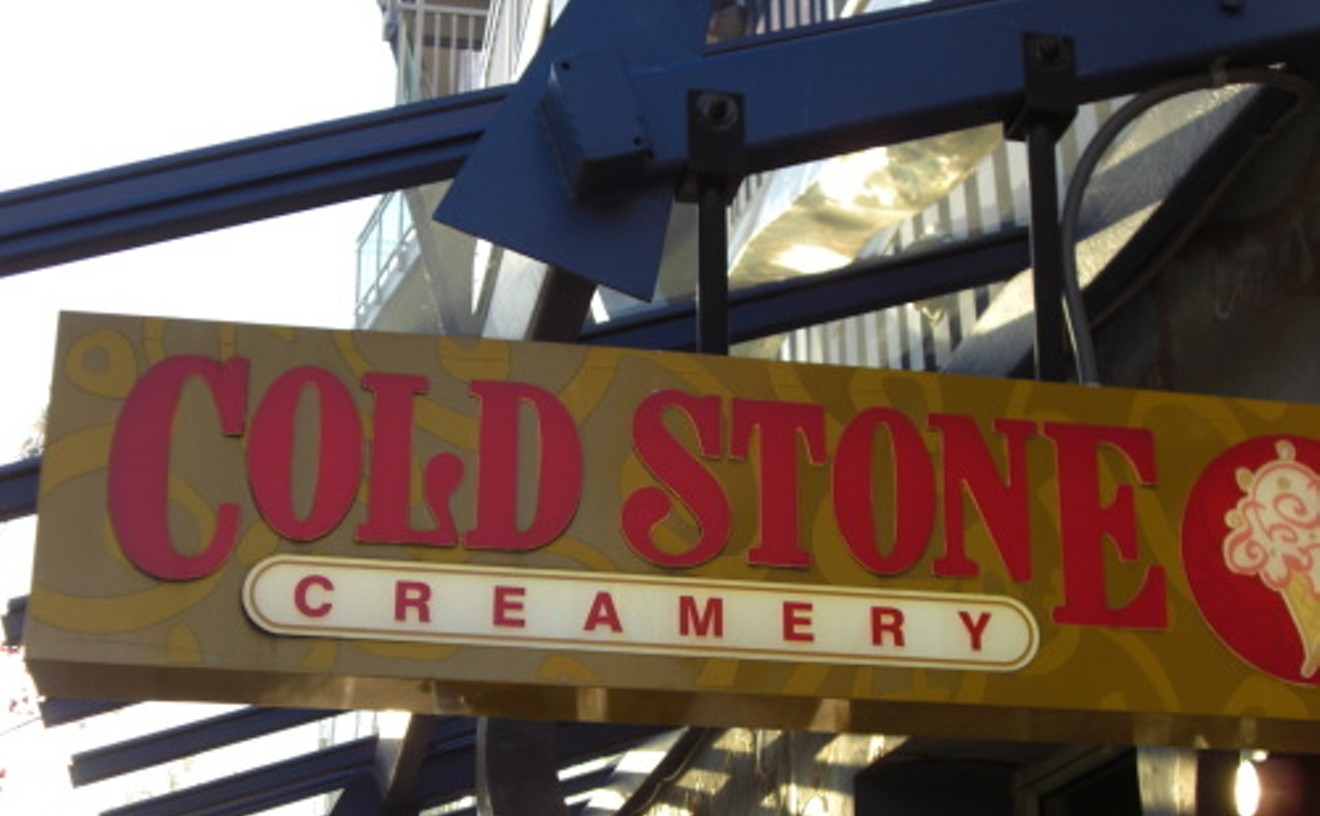 Even the proudest Phoenician can't help but be a bit deflated walking the Arizona State University campus with a New York visitor and hearing, "Gee, where are all the people?"

That's why we were so delighted to hear a squeal when we passed Cold Stone Creamery. We like Cold Stone's ice cream, sure, but for us, it's no big deal -- we can have it any time, at one of dozens of shops that the Scottsdale-based company runs in town. But our friend was through the door, already placing her order in, well, a New York minute. Turns out Cold Stone's the hottest thing to hit Manhattan since Coors started selling beer east of the Mississippi. But it's still hard to get to, in the Big Apple. There isn't a Cold Stone on every corner -- yet.

We watched our friend gorge on a vanilla/cookie dough mix-in and thought to ourselves, "See? Phoenix isn't so bad after all."

BEST PLACE TO TAKE A TUCSONAN Timur Guseynov
We love Tucson, but we've gotta tell you, sometimes people from Tucson can wear a little thin on the nerves. We're getting sick of hearing how much better the Old Pueblo is than our metropolis, sick of complaints about how much water we waste irrigating our bright green lawns, how no restaurant up here compares to the restaurants down there. The truth is that Tucson is populated with aging hippies, and what really bugs them is that they're under the impression that you can't find a decent vegetarian meal north of Marana.

Next time one of your Tucson homies can't avoid a trip to Phoenix, shut him down and fill him up at Pita Jungle. Every time we eat at the grunge-chic, concrete-floored restaurant in Tempe (or its similar companion in Chandler), we feel the Tucson love. This place is straight off the campus of the University of Arizona, with a wide variety of Mediterranean dishes including a cheese-topped pita "pizza" and a great combination platter of chicken, beans, rice, garlic sauce and pita. The best part of Pita Jungle is the environs -- with groovy local art on the walls and dreadlocked customers kicking back over berry tea, you'd swear you've died and gone to -- yep -- Tucson.

The Iowa Cafe and Gifts

Are you in the mood for some "hog-slopping, field-plowing, hair-on-chest food" just like they done eat in the Hawkeye State? Well, git on down to the Iowa Cafe in Mesa and grub on some good ol' down-home cookin'. The bustling true-blue Iowa-gal-owned restaurant has been serving up diner-style breakfast, supper and dinner all day, every day, to hungry customers since 1983. The inside is adorned with Iowa paraphernalia, including a wall completely covered with license plates from 97 of Iowa's 99 counties. Dessert is a must, with more than 15 types of pies baked nightly, including apple, mincemeat, rhubarb and chocolate peanut butter. After chow time, check out the novelty items in the gift shop, such as rubber ears of corn and John Deere bottle-cap catchers. Ooo-wee! It's more fun than a greased pig contest at the county fair.

BEST MEAL IN THE BACK OF A BREWERY New Times Archives
When a friend invited us to join him for dinner at Four Peaks, we went willingly. We've eaten the burgers at Four Peaks before; the prospect of another was a happy one. We didn't wind up with a hamburger, but we were still thrilled. Who would have thought that there, in the back of Four Peaks, with a Suns game blaring in the background, we'd have one of the best meals of the year?

Every so often, the folks at Four Peaks break out and get their culinary groove on, in a big way. In this case, it was with a four-course, five-beer dining extravaganza. We mingled with Cask-Conditioned Mild Ale, then sat down to a first course of lamb won ton soup and a glass of Idle Hands. We kept busy with a second course of buffalo spring rolls and Hop Knot Ale. We have to admit we don't remember much after that, but seems to us a rib eye -- perfectly prepared, brushed with oyster sauce and accompanied by veggies and rice -- appeared next, with our favorite Four Peaks blend, Kiltlifter. We do remember one thing: that dessert, a calzone filled with ricotta and brownie filling, with chocolate and raspberry sauce, would have fed the entire table, it was so big. But we were glad to have one to ourselves, along with a glass of Chambord oatmeal stout.

We can't wait for the next pig-out, er, we mean gourmet dinner at Four Peaks. The Web site promises the next one is coming soon.

BEST MEAL COOKED IN YOUR OWN HOME

We have a dream: Our favorite local chef rings the doorbell, enters our humble home with coolers full of fresh food, and proceeds to cook a five-course meal in our kitchen as we look on, sipping wine, then sit down to dinner in our own dining room. (With more wine, of course.) The chef's kind assistant serves us dish after dish -- gigantic prawns, delicate won tons, sweet chicken and rice. Sated, we stumble into the kitchen to find more wine, and it's cleaner than when the chef arrived.

The dream came true when Johnny Chu, proprietor of Fate, the funky Chinese eatery that's a favorite of the downtown lunch crowd and First Friday scenesters, happened to mention that he moonlights, happily accepting the assignment of cooking in any kitchen. The meal wasn't cheap, but it certainly didn't cost more than a feast at Fate, and the food was even better, if that's possible.

Our compliments to the chef! 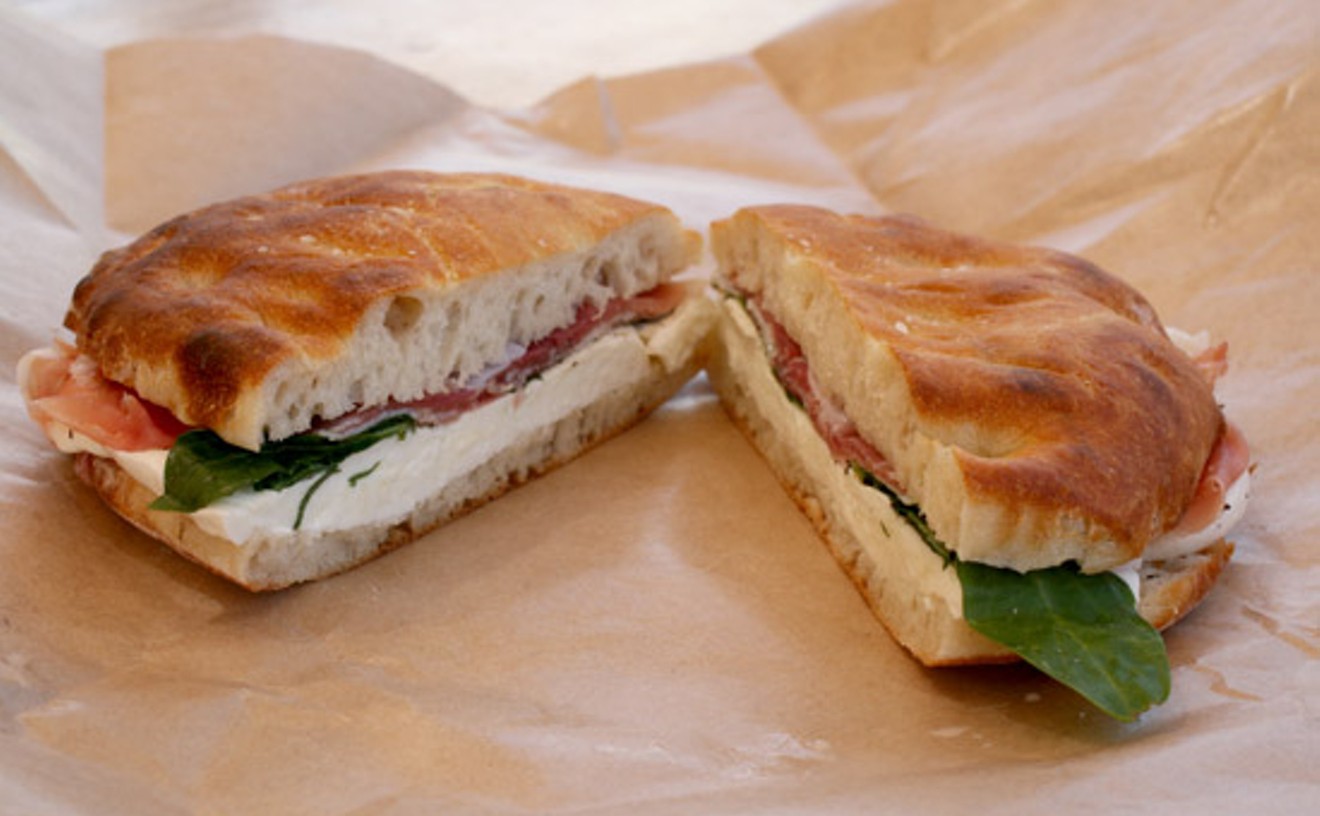 Heather Hoch
From the caramels at Pane Bianco to the paintings in the restroom at Pizzeria Bianco, the attention to detail at the Bianco establishments -- run by Chris Bianco with help from his partner Susan Pool -- is exquisite. Bianco and Pool are the most gracious of hosts; diners will happily wait hours for a table at the pizzeria, or roast in the summer sun to enjoy a market sandwich from Pane Bianco. Bianco and Pool wisely leased a building near the pizzeria and opened a perfectly appointed, shabby chic bar, with a beautiful selection of wine and beer, and a first-rate cheese plate to ease the hunger pangs. And the picnic tables outside the sandwich shop are handcrafted, the paper napkins tied with a sprig of rosemary, a chocolate in each perfect brown bag, stamped with the Pane Bianco logo.

BEST MEAL ON THE OUTSKIRTS OF TOWN

Jackie Mercandetti
With the spectacular backdrop of the Bradshaw Mountains looming above, the Rock Springs Cafe and General Store offers travelers a perfect respite from the road. Located about 45 miles north of downtown Phoenix, the cafe serves up tasty and hearty meals. If a cool cocktail is what you're after, check out the adjoining saloon that features off-the-track horse race betting.

Once a stagecoach stop, the cafe attracts a wide variety of guests, from grizzled prospectors and cowboys to glittery Scottsdale divorcées on the prowl; from families packed into the minivan for a trip to the Grand Canyon to bikers out for a Sunday ride. The coffee is strong, and don't forget to try one of Penny's amazing pies and enjoy a slice of old Arizona before it disappears under the relentless wave of development that's steadily marching north along the Black Canyon Freeway.