Operated out of local sci-fi writer Michael Mennenga's crowded home office in northeast Phoenix, "Wingin' It!" is a freewheeling weekly gab fest hosted by Mennenga and his pal, Web designer and practicing herbalist Evo Terra. Ostensibly a show dedicated to science fiction and fantasy books, "Wingin' It!" takes off on any number of geeky tangents, often rambling about podcasting itself, which has narrowed from an anyone-can-do-it field to one where only the strongest personalities thrive -- much like regular radio, only with more freedom and fewer commercials. For Mennenga, who until recently co-hosted a similar show on talk-radio KFYI-AM 550, and Terra, author of an upcoming book called Podcasting for Dummies, this is a dream gig -- one they're happy to share with local podcast geeks everywhere. 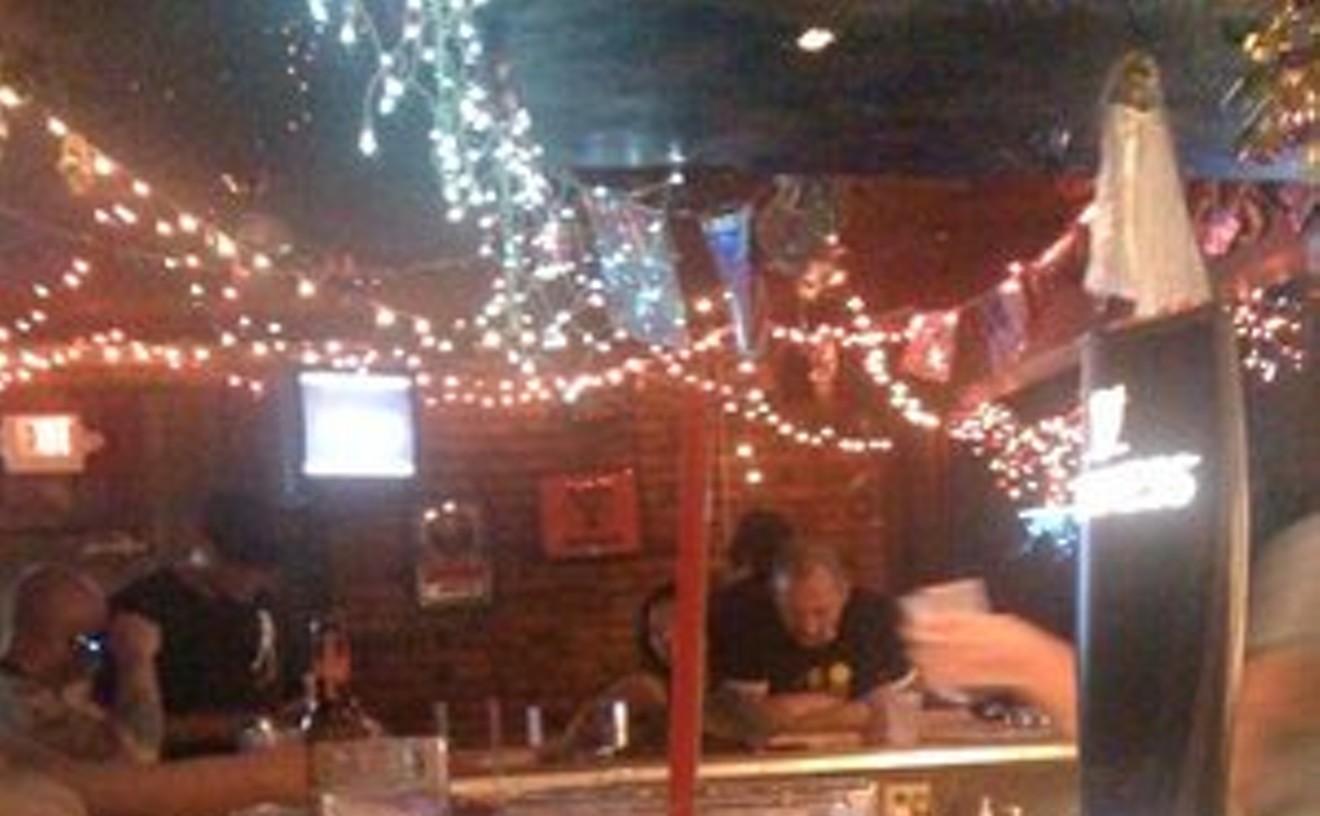 Turns out that drunks and dickheads aren't the only things that've been 86'ed from this roadhouse, as boredom and pretentiousness are equally verboten. Despite this club's hot spot in the shadows of Scottsdale, there's nary a posturing person to see or be seen among a diverse throng of pierced and tattooed patrons, trendy college kids, working stiffs from the General Dynamics plant across the street, and others who congregate here. In addition to all the people-watching, amusement can be found via an array of amateur comedians who pack their gags into one side of the club for yuk-filled shows throughout the week, while DJs, local bands, and a cast of spunky/funky/punky barkeeps and wait staff offer diversion on the other. Besides, when's the last time you were in a bar that's lit by candlelight (other than during the last blackout)? 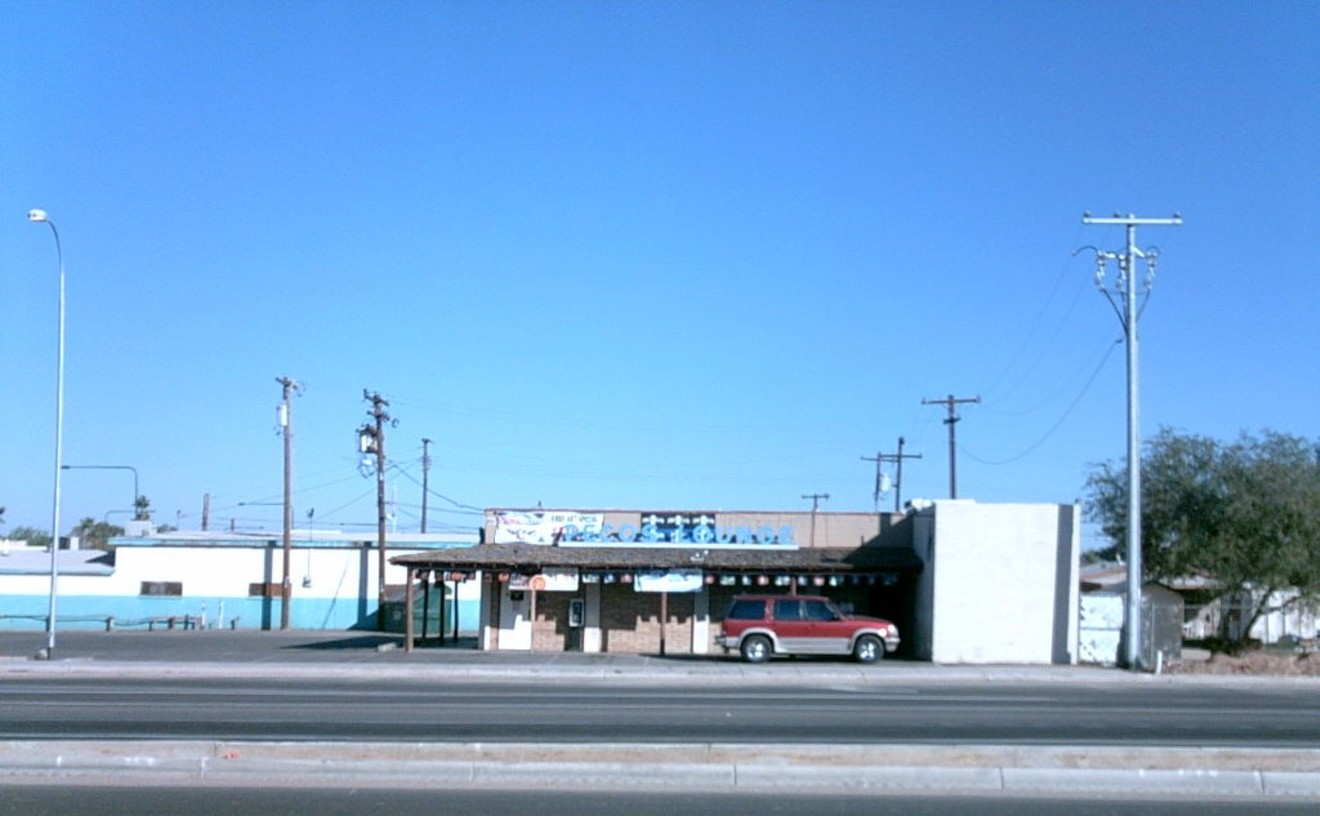 A thought struck us the other day as we sipped a rum and Coke while maxing and relaxing inside this, our newest favorite watering hole: This place is definitely chill. Maybe it's all the fans and vents blasting freezy freshness throughout this darkened shelter from the sun, or perhaps it's the refreshing specialty drinks like the Blue Lagoon (a breezy blend of vodka, curaçao and pineapple juice), imbibed by all the wild regulars who slide on in during the cool-as-ice Latin Night Thursdays, with DJs spinning salsa, merengue, reggaeton, and American oldies. It's also pretty groovalicious that the owners keep things spic-and-span here, reminding their staff (via a Magic Markered sign over the register) to refrain from eating sunflower seeds at the bar and to "Clean, clean, all ways [sic] clean." We don't care if they can't spell here. We love 'em anyway.

Unlike other blogs where people yammer about what they had for breakfast or who they ran into at the mall, "Jon's Jail Journal" is worth reading, thanks to its dry British wit and clever word play. The author is convicted Arizona ecstasy ring leader "English" Shaun Attwood. Convicted in 2002, the yoga-practicing, book-loving former stockbroker has been penning his ponderings to keep his sanity while residing in Sheriff Joe's jail. Don't believe us? Here's an excerpt from a March entry:

See what we mean?

We're big fans of the Republic's "Today's News Briefing" section, with its super-short stories about global hot spots keyed to a world map. But the paper's effort on May 11 was off the map -- literally.

One of that day's briefs informed us that "President Bush brings words of support for Georgia's democracy and its wish to join NATO but no firm promise of assistance to help it wrench itself from Russia's influence."

When we saw the arrow was pointing to an area near Atlanta, fear reverberated. Russia's influence? Russkis in the Old South? And how had democracy hit a trouble spot in the state that brought us Jimmy Carter and Newt Gingrich? We were relieved to see a correction the very next day -- the Georgia that Bush visited, the Republic informed us, is actually near the Caspian Sea south of Russia.

Did they have to scare us like that? Reading that paper is frightening enough as it is.

Benjamin Leatherman
BS West is absolutely one of the friendliest clubs you'll ever party at, whether you're bi, gay, straight, or none of the above. Hidden in Scottsdale's back streets (despite its Fifth Avenue address), the party's always pumpin', with enough stud muffins in attendance to make a het fella rethink his sexuality. It's got the feel of a two-story gay frat house in the midst of Scottsdale's party scene, with a 2-4-1 hump day special that makes BS the place to hit on Wednesday nights. But as wild as it can get, BS still retains a neighborly feel, where people aren't afraid to converse with one another, or at least flirt shamelessly. And the bartenders actually seem happy to have your business, unlike at some other places where they make you feel like they're doing you a favor by serving you. BS has been going strong since 1988, and if it stays the way it is, it'll probably be alive and kickin' in 2088.

There was a time when people were afraid that "The Biz" would be a victim of its own success. The Valley's oldest lesbian bar is also its best-known, and if straight people know about only one gay bar in the city, it's The Biz. But what makes this bar so popular for people of any sexual orientation is not just the promise of hordes of hot women writhing together on the dance floor. The DJs, Tsunami and Suzy, spin the hottest mixes of hip-hop, house, Top 40 and retro, and the bartenders serve up drinks faster than you can say the L-word, not to mention the slew of sexy shows (the band Betty, musician Jennifer Spector, and drag kings) and erotic events (wet tee-shirt contests and "Stripper Night"). But don't take our word for it. Show up on a Thursday or Sunday night and see for yourself. Just be prepared to stand in line if you show up after 10 p.m.

Way back in 1986, the late Mr. Thompson showed up at our fine offices on East Jefferson Street with a beer in one hand and a joint in the other. He had this comment: "I want to find out who killed Don Bolles, and I want to start at the dog track." (Or words to that effect; memory does fade.) Bolles was a reporter who got murdered by some local thugs in 1976. Thompson's momentary obsession with all things Bolles had been fueled by Thompson's girlfriend, a young west Phoenix woman who had run off with him a year or so earlier. Off we went to the track, down on 38th Street and Washington. Wouldn't ya know it, the pickled scribe picked the longest shot to win the first race, betting $100 and collecting about $1,000. Suffice it to say, that money was dumped on liquor, food and much more betting within the hour. "No big deal," he announced to everyone within shouting distance. "I was gonna expense all this anyway."

These two court watchers from Tempe never meant to insert themselves into the middle of the Scott Peterson trial. Really. They were just in Redwood City, California, trying to get a coveted seat in the courtroom -- the next logical step for two Court TV obsessors, who'd made names for themselves as frequent posters on the Court TV Web site -- and figured that while they were in town they'd cruise around in their rental car, take a self-guided tour of the scenes of the crime. When McCallie took a photo of a bag of cement in Scott Peterson's driveway, then posted it on the Web, suddenly both "Jordie" and "Katie" (their screen names) were in the middle of the story they loved to chat about. McCallie was under a gag order for weeks, and while ultimately she was not called on to testify (the jury issued its "guilty" verdict before that), prosecutors say the photo was key evidence, useful in their courtroom strategy.

McCallie and Monkman are still avid court watchers, and New Times' story about their antics has drawn attention from screenwriters and television producers. We'll say we knew them when.

BEST PLACE FOR GUYS TO WATCH GIRLS GRIND ON EACH OTHER 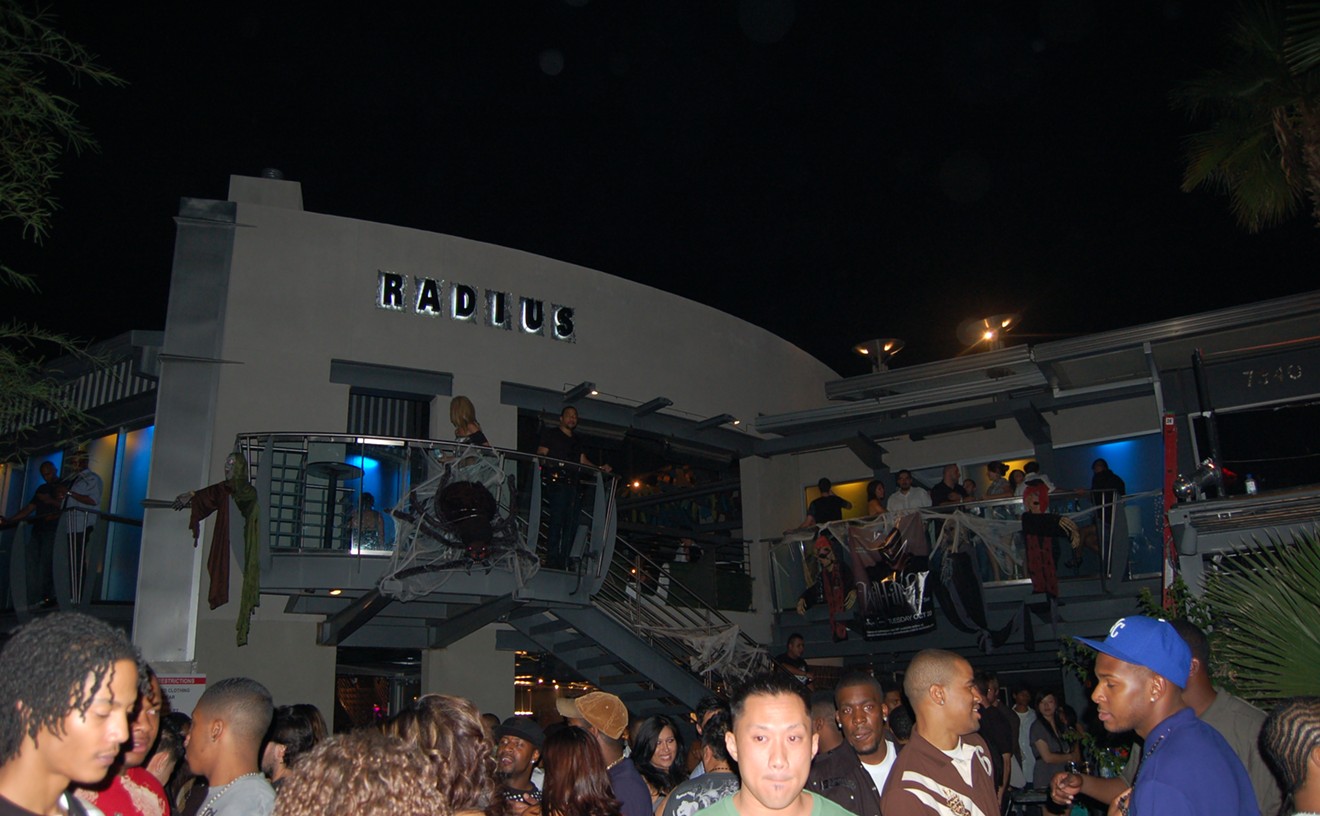 We swear, if we took our mom to Ain't Nobody's Bizness, then drove her across town to Axis/Radius, she'd think the Scottsdale club was the lesbian bar. Everybody knows that the gals in the stylish Scottsdale clubs are stone-cold hotties, with their low-cut shirts and skirts so tight they could have been painted on. But at Axis/Radius, they let it all hang out, with full-on, girl-on-girl grinding. The guys love to gather 'round and watch the ladies go at it, even if the femmes fatales are "just friends" off the dance floor. And judging by the lack of same-sex ass-shaking and smacking when the guys aren't looking, the show is for the blokes, anyway. That's a nuance we figure would be lost on Mom.