To paraphrase an old saying about a dead cat, you could swing a baseball bat in this town and hit a piñata. Many grocery stores sell them, and you can easily cruise 16th Street in central Phoenix and find a wide selection. But would it be wide enough? This year, our little princess didn't want a princess piñata. She wanted a piglet. And not just any swine would do; she wanted Piglet — you know, from Winnie-the-Pooh. After exhausting our brick-and-mortar possibilities, we got online and found Arizona Piñatas. We called, and a cheerful employee complied, agreeing that Piglet would be ready by Friday. And would we like it delivered? What? We just about dropped the iPhone, we were so happy. Yes, absolutely. And, sure, throw in the matching stick to whack the thing with. This endeavor wasn't cheap, we'll warn you. But, boy, was it worth it. Piglet arrived on our front porch on time as promised and was the life of the party until, well, until he wasn't.

People often refer to Phoenix as a young city, but our burgeoning metropolis has a pretty old soul. That's why our hearts delight when we have the opportunity to drive past what used to be the El Mural bar in west Phoenix. It's been years since anyone's hoisted a drink there, but the outside is still emblazoned with the beautiful work of Victor Caldee. Though of Cuban origin, the artist (with the help of Miguel Dominguez) brought together a bevy of Mexican icons: music and entertainment heroes Beatriz Adriana, Lola Beltran, Vicente Fernandez, and Jose Alfredo Jimenez, and revolutionaries Pancho Villa and Emiliano Zapata. The spirit of old Phoeniquera barrios is further connected to a past long gone via the depiction of a Mayan figure and pyramid surrounding El Mural's entrance.

Best Day of the Dead Festival 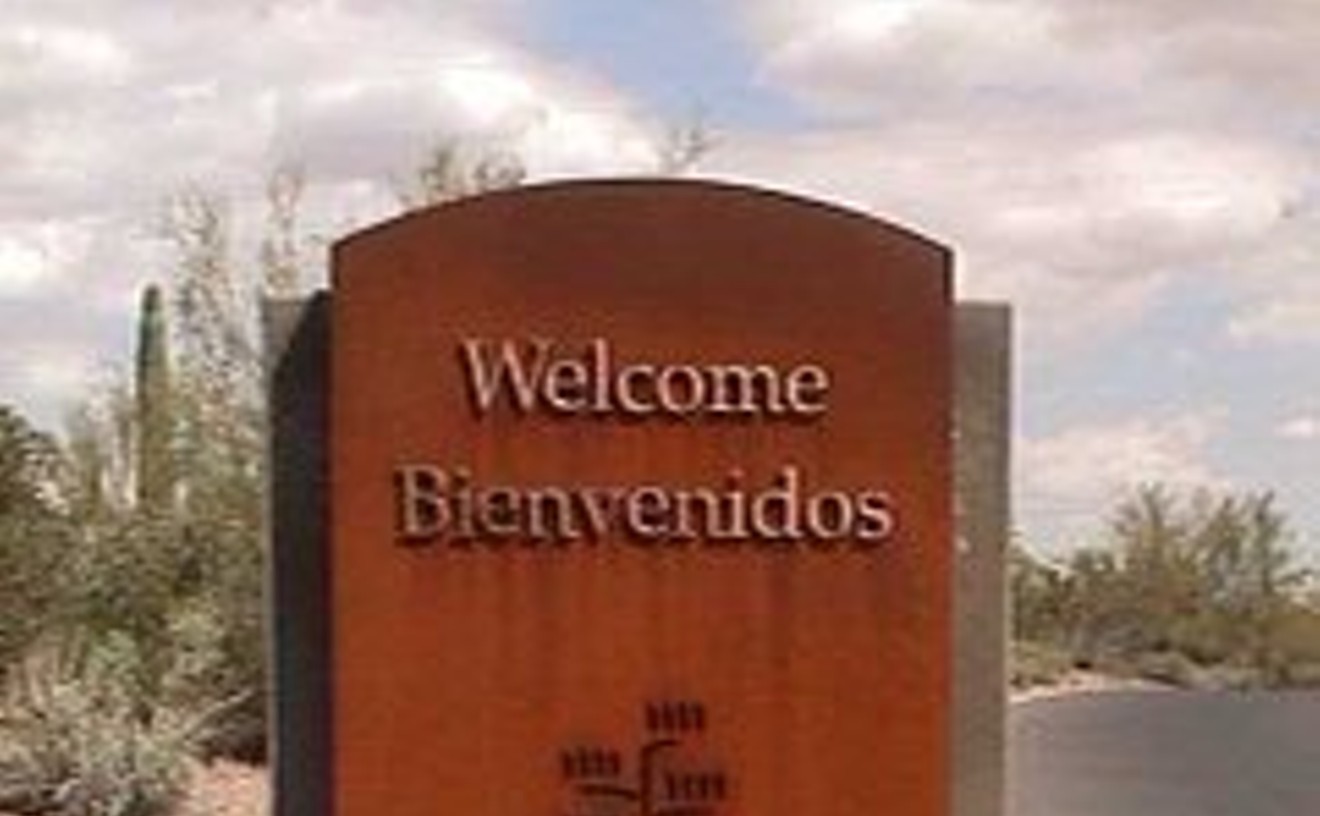 For the past several years, the Desert Botanical Garden has thrown the best Dia de los Muertos party in town. This year, the festivities — held Halloween weekend and the first week of November — promise to be grander than ever, with performances, food, and hands-on crafts for the kids. Oh, and a mercado! We'll be sure to stop by to check out the wares offered by Bets and Nancy Nenad, two adventurous Phoenicians who travel through Mexico to bring back a fine, fun selection of skeletons in many forms — from plastic to papier-mâché. Hey, it's a living.

The Hispanic equivalent of the bat mitzvah or "Sweet 16" party, the quinceañera marks a Latina girl's coming of age. It's easy to find a respectable dress for the event, but only at a true tiendas de bodas can you get service to fit a quince's exact needs. Owner Ofelia Martinez understands the Hispanic market and, more importantly, understands young Hispanic women. Her shop carries a wide range of colorful gowns and specializes in "plus sizes," which means girls with curves won't have to stretch and tug their way into a stick-girl dress. Fluffy, traditional quinceañera dresses in shades of peach and robin's-egg blue are plentiful. If the quince is a modern gal, perhaps a more contemporary sheath dress — in ivory white to please la familia. The shop also does in-house alterations and carries latilla veils, rosaries, crowns, and gloves to accessorize the little princess. Whether the quince wants to look like Cinderella or J-Lo in The Wedding Planner, Ofelia has her covered. 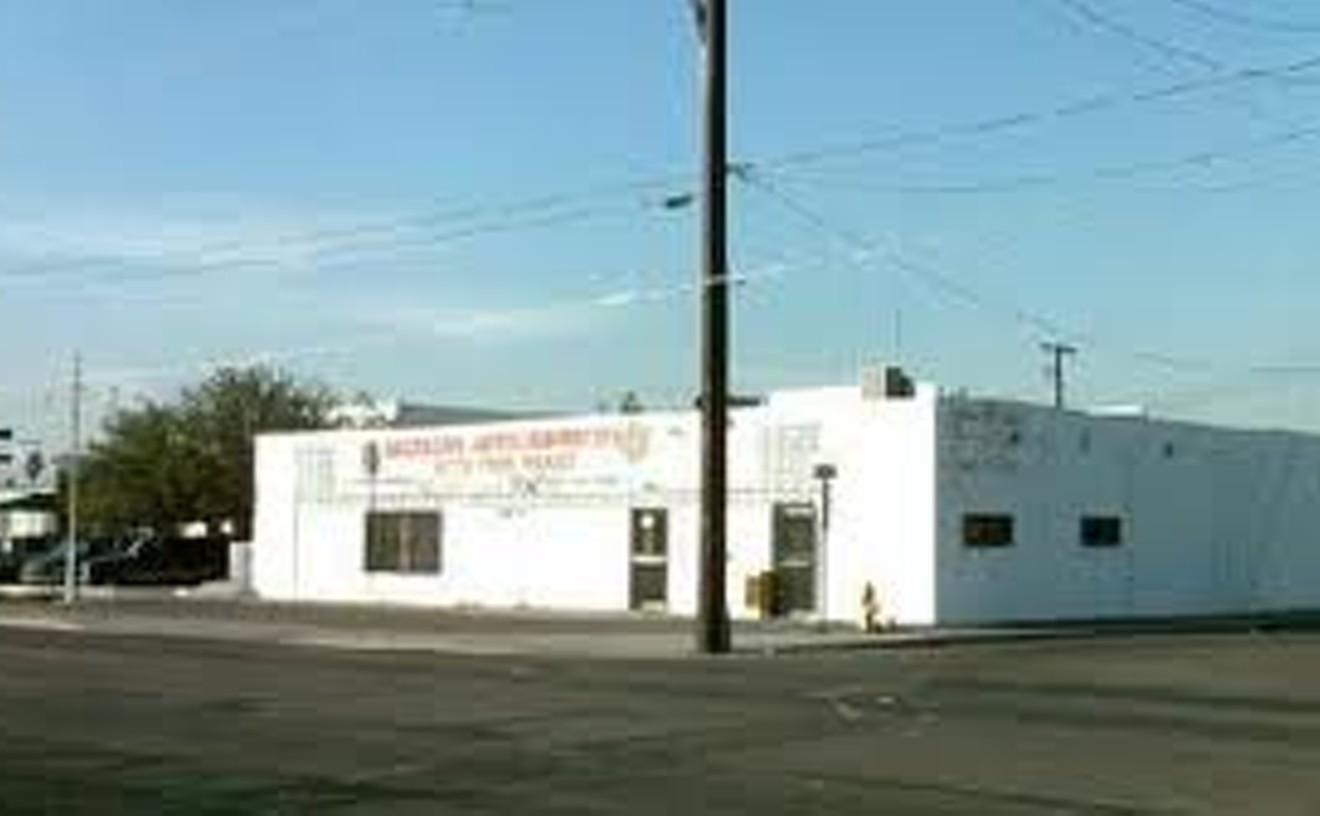 At one end of this cavernous, winding mishmash of spaces is a room packed with all kinds of crosses — metal, tin, wooden. At the other end, there's a room full of hand-tooled gun holsters. In between is just about any Mexican tchotchke you can dream of: small wooden guitars, leather wallets, ceramic pots, embroidered dresses. We felt like we'd died and gone to Nogales. Beware: The neighborhood, across the street from the Arizona State Hospital, is in a rough part of town near Van Buren Street. Obviously the owners are aware of their surroundings. The place opens at 9 on weekdays, but whatever the time of day, you'll need to ring the bell before they'll let you in.

Let's be honest: Too much that goes on in Sand Land stays in Sand Land. That's to say, if a saguaro falls in Cactus Country, unless news of it reaches beyond the borders of the state, it sometimes seems as though it never happened — no matter how great the injustice involved. So when a rock star like Zack de la Rocha champions the fight for civil rights in Arizona, it's a big deal. De la Rocha, formerly of the incendiary L.A. band Rage Against the Machine and currently of the duo One Day As a Lion, has infused the struggle against Sheriff Joe Arpaio with energy and passion, drawing a whole new crowd to the pro-immigrant marches demonstrating against Arpaio's racial-profiling sweeps and the federal 287(g) agreement with ICE that empowers them.

On February 28, a march de la Rocha participated in, from Steele Indian School Park to downtown Phoenix, drew nearly 5,000 demonstrators. Then, on May 2, he led 2,000 in a seven-mile walk from downtown Phoenix to Arpaio's Tent City. During both stays in Phoenix, he signed hundreds of autographs to raise money por la causa, and he gave speeches and impromptu concerts. De la Rocha's participation in Arizona activism appears truly selfless and guided by the memory of de la Rocha's own immigrant forebears from Mexico. More important, his efforts here have garnered press for this struggle far beyond Maricopa County, where folks know too little of the truth about Arpaio's reign.

Scottsdale resident Dennis Gilman is used to being threatened by nativists. They've called his house. Posted his address on the Internet. And whenever he shows up at, say, the Macehualli Day Labor Center in north Phoenix, where vicious nativist groups such as United for a Sovereign America keep vigil with their guns, he attracts them like a magnet, and the verbal abuse often seems close to spilling over into violence.

Being that he's as Irish as a pint of Guinness, Gilman doesn't like to back down. Also, as he'll tell you if you ask, you'd get better footage when you're up in their faces. See, Gilman is the Michael Moore of the local pro-immigration movement. His weapon is a video camera, and he uses it to expose the hate and prejudice in Arizona that seem as plentiful as scorpions. The footage he edits ends up on his YouTube channel HumanLeague002. Because of his efforts, thousands have seen the raw ugliness of the immigration debate at ground zero. Activists from around the world now seek out his mini-documentaries. And he often scores footage that the local and national news media pick up after the fact. He's what more journalists used to be: scrappy, defiant, and beholden to no one.

We have to give it up to former state Senator Alfredo Gutierrez for creating this bilingual Web site, one representing the future of Arizona and the Southwest. La frontera refers to the border, and Gutierrez stretches the meaning to encompass the exchange of culture, news, and language that occurs in states like ours — where America meets Mexico, English meets Spanish, and Anglo meets Hispanic. There's immigration, Sheriff Joe, and Arizona politics from a Latino perspective, but there are also pieces on art, literature, popular music, and food. Much of the site is in English, but there's plenty in Spanish as well. The result is a Web site that brings people together — in a cool, non-schmaltzy way — rather than pushing them apart. And if we gabachos pick up a word or two of español in the process, that can't be a bad thing, now, can it?

Best Meal in a Parking Lot

There's nothing quite like dining al fresco. The fresh air, the stars, and a killer view are all part of the deal. At Nogales Hot Dogs #2, the view may consist of cars whizzing by, but, hey, that's all part of the charm. For seven years, Pablo Perez has been dishing up a little slice of heaven known as the Sonoran-style hot dog. Tucked into a fresh bun and wrapped in bacon, these babies come smothered in beans, mayonnaise, and chopped tomatoes. Feel free to load up with guacamole, salsa, two kinds of cheese, and more. Meaty, messy, and marvelous, these pockets of perfection are a measly $2.75 a pop. Pablo's even got a TV tuned to the latest telenovela, so take a load off and stay a while. We never said dining in a parking lot would be fancy, but these dogs sure make it worthwhile.

Best Place to Get Drive-Thru on a Bicycle 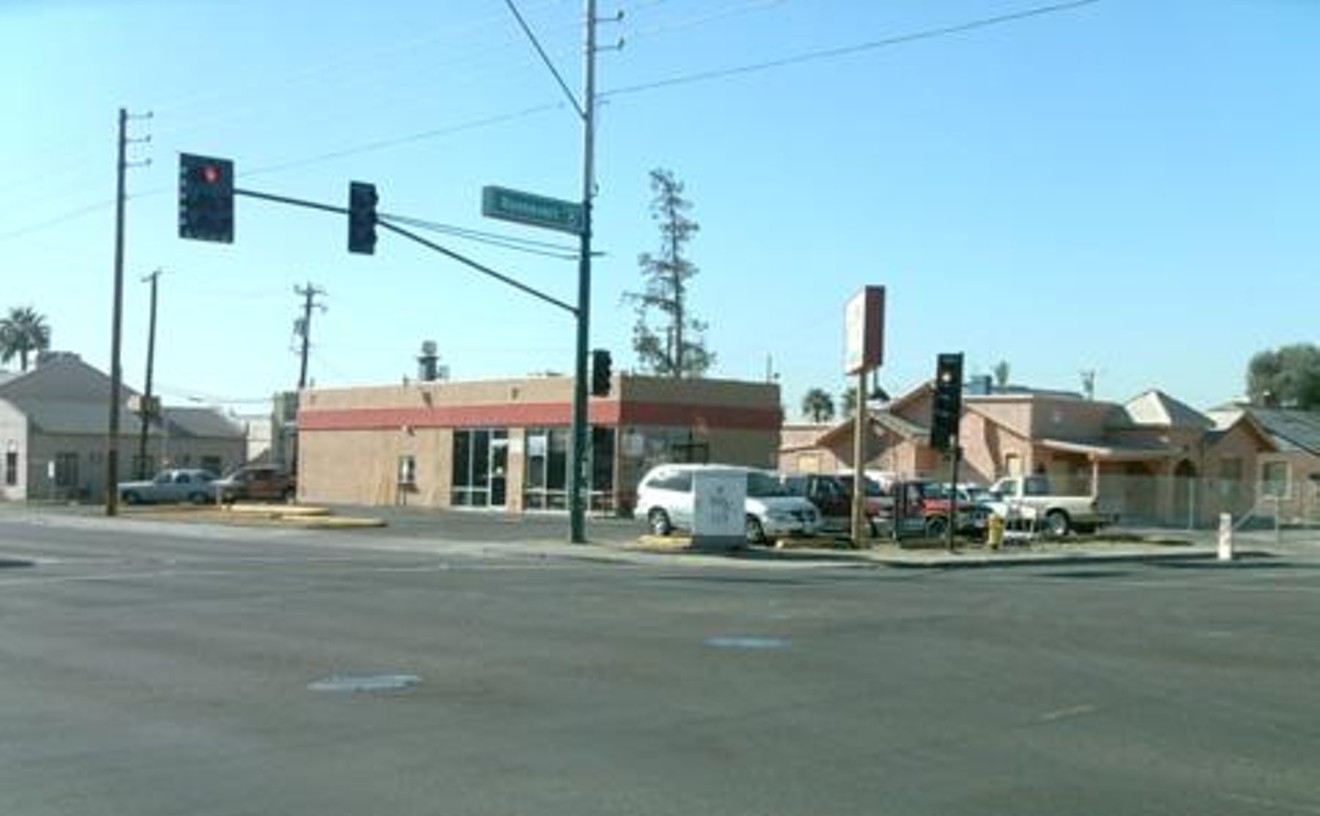 Fast-food joints like to get their dictator on whenever a non-automobile attempts to order at the drive-thru. Not so at Antonio's, which won't discriminate against folks who roll up on two wheels. Basically a Filiberto's clone, this spot on 16th and Roosevelt streets serves bicycle-riding or walk-up customers 24 hours a day as they look to satisfy their cravings without a car.