As groovy as it can be to catch shows at Valley rock clubs like Jugheads and Hollywood Alley, these joints ultimately bow to the awesomeness that was Madison Square Garden back in the day. A scuzzy mecca for punk and hardcore gigs during the early '80s, the defunct east Phoenix gymnasium/nightclub is where both renowned locals (JFA, The Feederz) and nationally known acts (Dead Kennedys, TSOL) unleashed three-chord anarchy inside a wrestling ring surrounded by cyclone fencing. Though it's been 25 years since Mad Gardens closed down and faded into local lore, you can revisit those mayhem-filled days through Bill Cuevas' online archive chronicling our state's Reagan-era punk scene. The former Tucsonan's Web site boasts a virtual treasure trove of vintage ephemera (including fliers, stickers, and photographs) for Arizona bands and dives that have long since gone the way of Joey Ramone — like Bundini's Warehouse in Tempe, or Tucson's legendary Stumble Inn. A few bootleg MP3s of classic shows (such as Black Flag performing at the Calderon Ballroom in 1982) are also available for download. See, punk's not dead; it just lives on over the Internet.

Tim Virgin isn't the most talkative DJ on Phoenix's rock radio scene, but that's kinda what we like about him. Market-wise, he's no virgin, bouncing all around this great land before landing at The Edge, where he spins a lot of '90s "alternative" rock, mixed with a select number of newer bands, during his afternoon slot. He's got a unique (but in no way grating) voice, and he doesn't overdo anything, which is pretty much what we like to hear between songs by Incubus, Nirvana, and Green Day. He also seems to be at least a little excited when he's spinning something relatively new — which may be a directive from the station's corporate overlords but makes us feel warm and fuzzy anyway.

Our morning commute just gets longer and longer, but it ain't because traffic's snarled again on the I-10. Ever since the acerbic-tongued jock Strawberry gave up his afternoon drive time shift in favor of urging 101.5 JAMZ listeners to "wake that ass up" from 6 to 10 a.m. every weekday, we've been extending our route to the office, if only to get in a few more minutes of listening. Between spins of the freshest Lil Wayne, Jeremih, and Flo Rida cuts, we're usually cracking up something fierce at his bits, which put other "morning zoo" deejays to shame. Besides the always-popular "Will It Flush Wednesdays," there's "Bitch Slap Mondays," where fans cast text-message votes throughout the show to determine which male in the studio (either the host or one of his sidekicks, Suge White and G-Mo) gets a hearty pimp-smack by outspoken newsgirl Vanessa. His tongue-in-cheek interviews are also top-shelf, be they with oddball listeners, porn stars, or hip-hop luminaries. (He even got to confab with DMX the day he got released from Sheriff Joe's gulag.) If Earl Simmons is down with Straw, then we gotta be, too.

T.I.'s hit single "Dead and Gone" (featuring Justin "Trousersnake" Timberlake) is an exceptional hip-hop track, one of the best off the Paper Trail disc from last year. But after hearing it five times in the span of two hours, even the pair's prodigious rapping and rhyming talents tend to sound a little weak. Same goes for the Black Eyed Peas' "Boom Boom Pow," Pitbull's "I Know You Want Me," or the Keri Hilson/Lil Wayne track "Turnin' Me On" (more like you're turning us off, Weezy). In fact, the relentless rotation of the same ol', same ol' played ad nauseam by the hip-hop radio powerhouses in this burg has got us tuning instead to 92.7, 99.3, or 101.1 FM on our radio dial to listen to the dope mix of old-school shizzle provided by KNRJ (a.k.a. "The Beat of AZ"). Until last fall, the station broadcasted high-energy EDM, but it's currently all about busting out anthems from 30 years of hip-hop that never get airplay: names like Biggie Smalls, Biz Markie, and even Grandmaster Flash. In one hour alone, we heard "Dre Day," Ice Cube's "Check Yo Self," and the Afrika Bambaataa classic "Planet Rock." It's almost enough to make us want to bust out the parachute pants and start poppin' and lockin' again.

In Phoenix's topsy-turvy and hyper-competitive country radio scene (dominated by the twin-powers of KNIX and KMLE), one moment you're on top, the next you're out the door, and, before you know it, you're working for the other guy. We're not sure KNIX's Ben Campbell and Matt McAllister were good enough to get their former competitor — the Morning Mayor, Dave Pratt — recalled, but it does seem suspicious that their success coincided with his departure and replacement with KNIX's old team of Tim and Willy. Either way, there's no real competition between Ben and Matt, charming pretty boys whom the station wisely cross-markets whenever possible (and who score interviews with some of country music's top stars), and the insufferable Tim and Willy, who overuse the dumbass term "NashVegas" and have somehow ended up interviewing a dude from Def Leppard and mystery author Dean Koontz. We'd prefer to see Ben and Matt's tanned faces and pearly white teeth atop a pair of boots a little more often, but when it comes to picking a drive-time country twosome, Ben and Matt are it.

For those of you who have lived here for a while, remember when Phoenix was totally Podunk? Seriously. Back in the day, we remember seeing pickup trucks dragging their back bumpers down the freeway and hearing Southern-like accents at the neighborhood Circle K. The only thing missing was pure country-and-Western music on the airwaves, the kind you'd hear driving across a dusty stretch of rural Texas. (We're talking Willie Nelson, Dolly Parton, Hank Williams, Jr., and Woody Guthrie — you know, the good stuff.) Then we were made hip to Real Country FM. The Wickenburg-based station — which tends to play honky-tonk favorites, ranging from Patsy Cline's lesser-known hits to George Strait's old-school jams — has a strong enough signal to encompass everywhere we've been in Maricopa County, so you're only a preset away from Phoenix, circa 1975. KSWG also streams online; just check out the station's hastily designed Web site for easy iTunes-linked tuneage.

The grave of Waylon Jennings

Legendary outlaw country singer Waylon Jennings, the first country musician to ever have a platinum record, wasn't originally from Arizona. Though a Texan by birth, he's tied to the Copper State because he lived here much of his life and resurrected his career here by playing gigs seven nights a week at J.D. Musil's nightclub in Tempe. He also passed away here, at his home in Chandler, and was buried here, at Mesa Cemetery, the same grassy lawn that holds the remains of paroled rapist Ernesto Miranda of "Miranda rights" fame. Waylon's grave is a peaceful place, where you'll find his intricately designed black headstone adorned by flowers and trinkets left by generations of fans passing by. It's the closest thing a country music fan will find to sacred ground in this town, and it's well worth the trip.

A few years ago, Stephan Shepherd's wife was asked to edit the newsletter for her parenting group. She roped her hubby into writing reviews of kids' music — and that, boys and girls, is how Phoenix wound up with the best children's music blog around. Shep­herd doesn't just review music and report on the industry on his blog, he also brings super music to town — another reason to read Zooglobble and learn who's coming to the Valley and when. Now we have just one more wish, Stephan: Bring Baby Disco to Phoenix! You know what we're talking about.

Best Place to Take a 2-Year-Old

The Noodle Forest at the Children's Museum of Phoenix 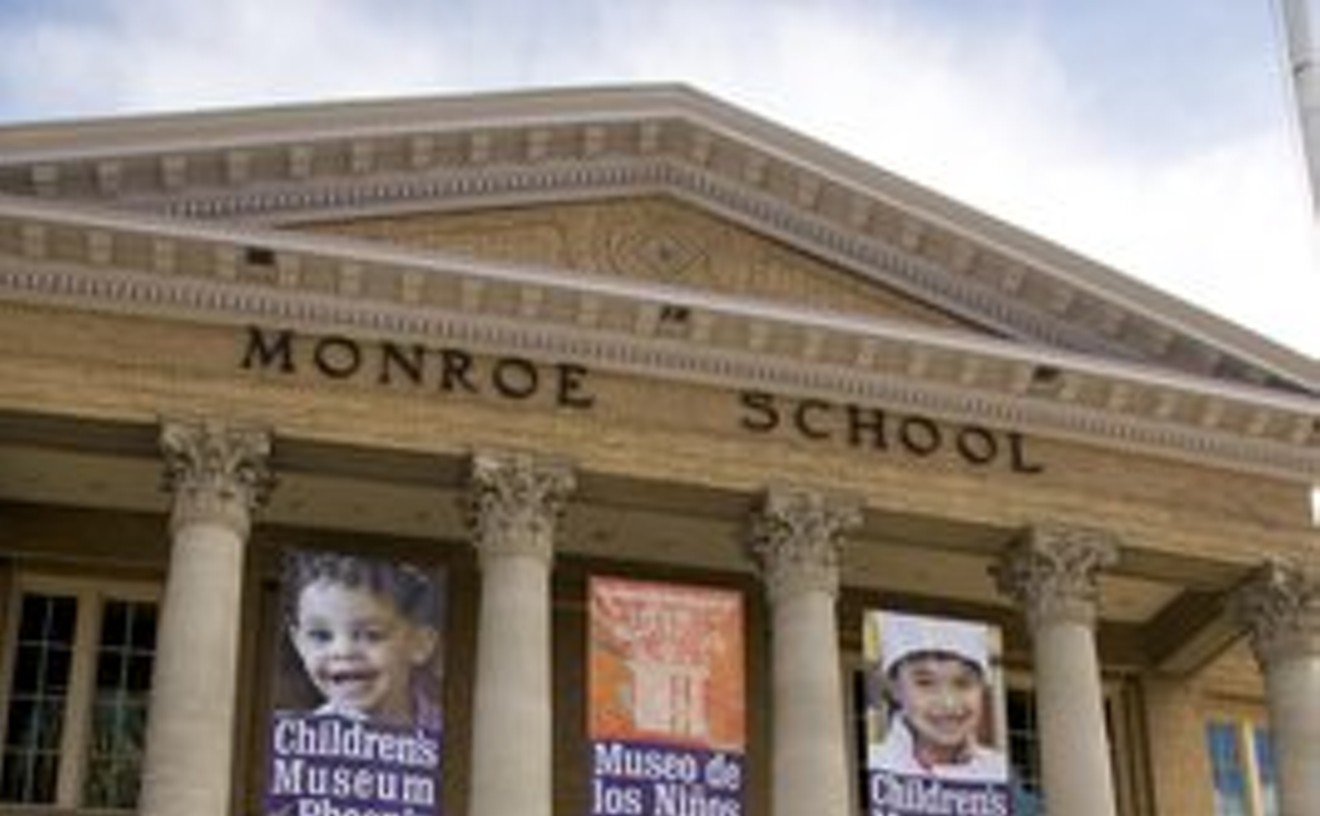 Google the words "noodle forest" and you'll find hundreds of hits referring to the groovy play area on the third floor of the Children's Museum of Phoenix, which opened last year. The playground is a rainforest of more than 3,000 lime green and creamy orange polyethy­lene foam tubes. The noodles hang from the ceiling and sway gently as kids chase each other through the padded jungle. This tactile and colorful bonanza can crack a smile on even the most crabby toddler . . . or adult. Admission is $9 for kids and adults and you get to see the rest of the museum, too. Under 1? It's free.

Best Place for Kids to Act Up

Whether it's their beautifully mounted productions at the still-sparkling new Tempe Center for the Arts, or the classes they teach year-round (including weeklong summer programs) at their nearby Tempe facility, Childsplay is a class act. When it comes to instruction, perfection is not the goal — a welcome relief in this all-too-pushy, test-obsessed culture. Kids can take classes with real life actors, then come to a show and see them perform onstage. That's what we call community theater at its finest!