What the Hell Bar & Grill Given its location in the dusty fringes of the Valley, it isn't surprising that a curious cross-section of society rendezvous at this Apache Junction juke joint. Much like in the fabled cantina in Star Wars, What the Hell is a bizarre bazaar, populated by beefy bikers, crusty desert denizens, duded-up cowboys, and Ed Hardy-clad 20-somethings. This mixing of the masses takes place within the expansive interior or at the elongated bar, where the collection of people who've made their way to the bar bond over a shared appreciation for all things alcoholic. Patrons shout their orders over the din of the hard rock and country bands performing on the corner stage, while sassy-pants barmaids gleefully serve such specials as $2.50 drafts, wells, and shots. It's the kind of bargain that even a scoundrel like Han Solo would dig.

Tom Carlson
It doesn't get much more "neighborhood" then good ol' Casey Moore's. Situated on the outskirts of the coveted Maple-Ash neighborhood, droves of Tempe locals have called Casey's their home for more than 20 years. Whether you're mobbin' out with your hipster girlfriends on a Friday night, curing your Sunday hangover with a bloody Mary (made famous in these parts by Tyler the bartender), or chillin' on the front porch with a book on a Wednesday afternoon, you'll always feel welcome. FYI: This place gets packed Wednesday through Saturday nights. Plan to arrive early to snag a roomy booth on the back patio — prime seating near the back gate is imperative for people-watching. 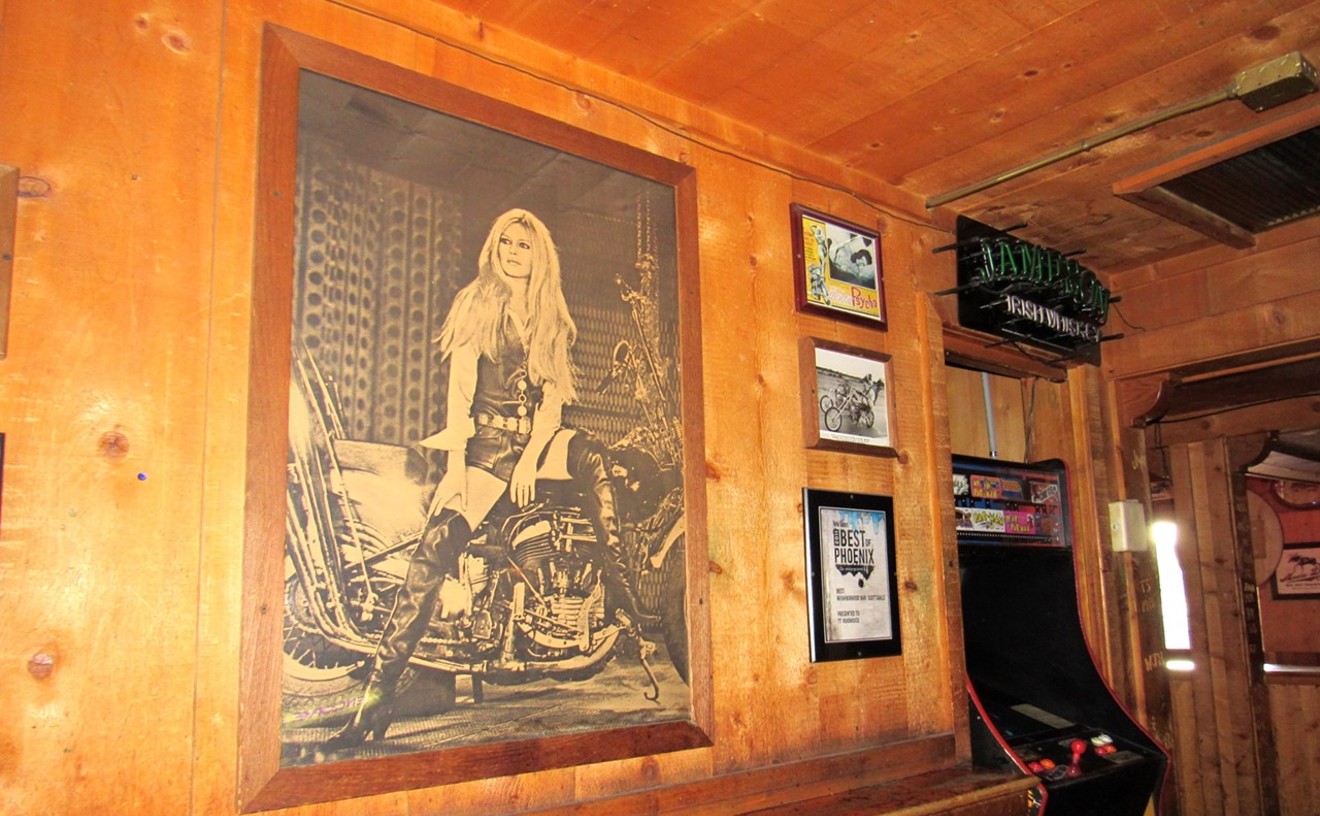 Lauren Cusimano
There's no denying that Scottsdale has got the club scene locked down, but sometimes you don't feel like waiting in line for a drink or getting all gussied up to go have one. That isn't to say that T.T. Roadhouse is slouchy, but it's certainly relaxed. Styled as a British biker bar, the Roadhouse is stocked with ales and harder stuff and features the Valley's best jukebox, hands down, loaded with punk and pub rock fare. DJs rule the sounds on some nights, but don't show up expecting trendy electro sounds; T.T. Roadhouse is a rock 'n' roll kind of place, and Scottsdale is all the better for having a bar that "don't give a damn about its reputation."

Lauren Cusimano
Quincy Ross and Jason Ayers throw great after-hours parties. On one mild Saturday night in July, they took over a building (which functions as a business by day) in downtown Phoenix for their "Sub: Confusion" party. The shindig started at 1 a.m. and filled the entire main room of the building. A slick sound system was set up, and DJs blasted drum 'n' bass music from a platform stage. The music was so loud it vibrated the floor and the couches near the restroom. Projection screens showed a montage of images resembling ink blots melding into headless figures, boxers, and rifles, in a psychedelic swirl of black, white, red, and purple. There was a bar in the corner of the room, serving mixed drinks, Tecate, Pabst Blue Ribbon, and something called a "Donkey Cowmule." The party started with about three dozen people, mostly 20-somethings in club attire, and end shortly before dawn after almost quadrupling in size.

Though they've thrown just a handful of parties as a duo, Ross and Ayers have long records of staging events. Ross has been doing it since the late 1980s, starting with his first "official" event, a free concert at the now-defunct Circles Records featuring The Roots, and DJs Fashen and Z-Trip. Under the DJ handle "Deepfreq," Ayers has worked a variety of electronic music events since 1994. The two met in 1996 but started throwing after-hours parties together just this year. They say they'd like to see the parties continue to grow while staying underground, so advertising is limited to their passing out fliers at clubs and events around town. "I would like Phoenix to know there are cool things that are happening in the underground scene," Ross says, "and hopefully inspire others to step it up." 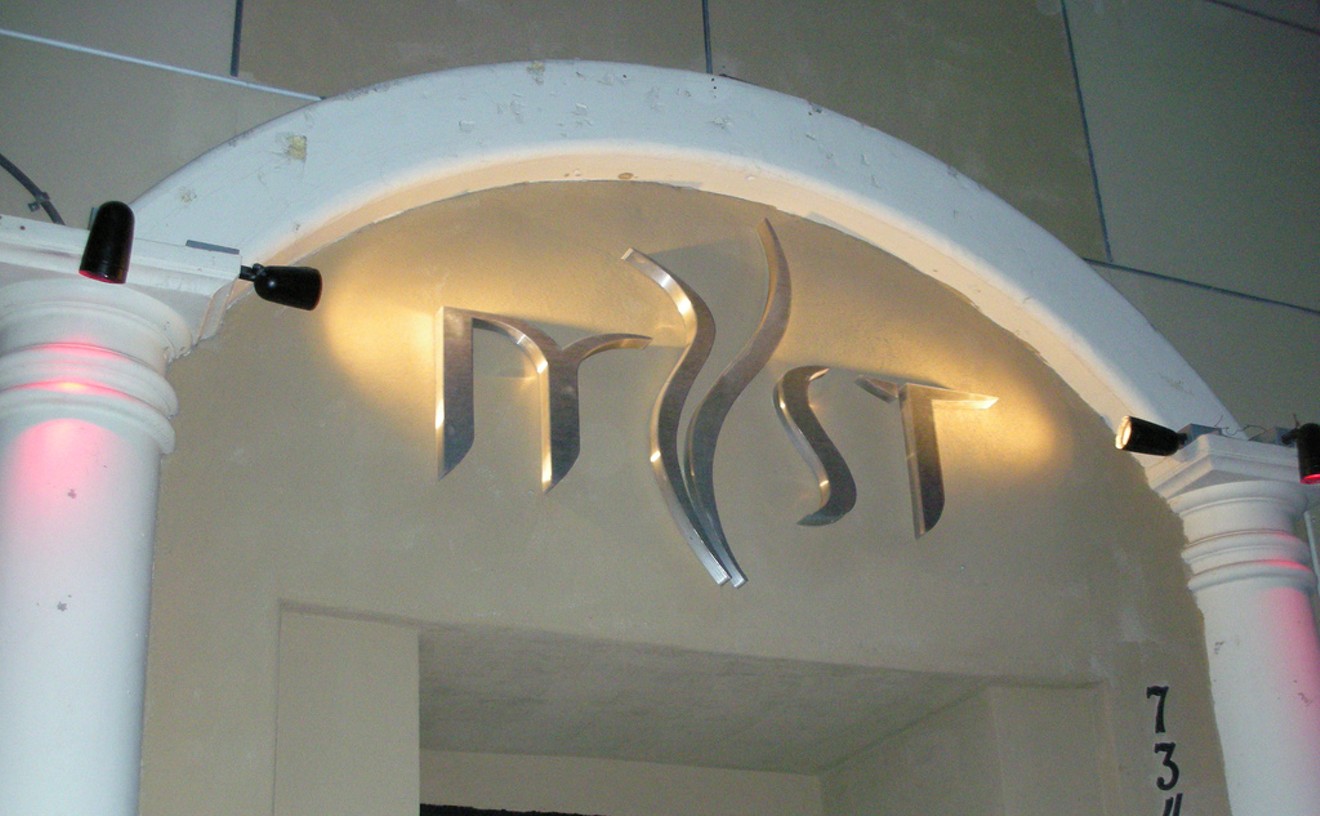 The music at Myst — deep, pounding house and flashy electronica — is loud. Real loud. That means you've got to get up close and personal to talk. And talking leads to touching and that leads to . . . well, you know. We're not saying that the glitzy lights and top-shelf liquor at Myst has never led to a couple meeting, falling in love, getting married, and living happily ever after — but chances are that most of the hookups inspired at the place have been far more fleeting. The bi-level bar's VIP areas are perfect for sharing tales of conquest, but don't blame anyone at the club if you've got a particularly painful walk of shame on the morning after.

The VYBe at Suite Twentyfive

If we were to just give you the address of this sweet underground artist venue, it would take the fun out of being cool enough to know about the spot and the late-night musical magic happening within. There's no doubt that a cool vibe is very much required to attend The VYBe at Suite Twentyfive, but you can start by searching for owner Melissa Howard and the event page on Facebook. On the second Saturday of every month, host Serena Richardson or "Wisdom" and crew, Terrance James, Kevan Aaron & James Przewoski, invite poets, musicians, rappers and artists to come together for an open-mic after-hours jam session. With live entertainment from some of the Valley's most talented local musicians, homemade BBQ and a room dedicated to movie watching, we guarantee it's the best $10 you will ever spend after 2 a.m. But we're leaving it up to you to find it.

Last call in Scottsdale is usually a madhouse, as hundreds of clubgoers and revelers spill into the streets and sidewalks of Old Town. Some folks who've had their fill of drinking and dancing usually call it a night, grabbing the nearest cab home. Those with more chutzpah (or energy for that matter), head for The Firehouse for some five-alarm, all-night fun. Sleep is overrated, especially when there's plenty of after-hours action taking place every weekend night until 4 a.m. at the Firehouse. Energy drinks are in abundance as the place gets absolutely packed with dancers and party monsters rocking the graveyard shift and literally hanging from the low rafters. Meanwhile, turntable jocks lay down hip-hop and dubstep tracks from a DJ booth shaped like a fire truck. There's typically a long line out the door, so consider arriving a bit before last call if you'd like to get inside.

You don't need a reservation to attend one of the lush, late-night banquets put on for local artists by Renetto-Mario Etsitty every First Friday. Just be a creative type who regularly participates in the monthly art walk and has the wherewithal to stay up late. The word-of-mouth gourmet spreads whipped up by the 36-year-old artist and sous chef at Phoenix Public Market typically aren't served until around 1 a.m., and it's first come, first served. It might mean slamming a few Monsters after tromping around Grand Avenue and Roosevelt Row, but it's well worth the caffeine jitters. When he isn't cooking at gallery openings and local art events, Etsitty spends weeks planning and prepping for each five-course dinner. A recent feast featured spicy cayenne prok ribs, hand-tossed spinach and tomato salad, oven-roasted zucchini with sun-dried tomatoes, and huge pitchers of sangria. While the boffo banquets, which take place on the lawn of his Garfield neighborhood home, are ostensibly free, Etsitty appreciates donations to help cover costs. So drop some cash into his jar, cheapskate, and don't just try to sneak away like a skinflint. 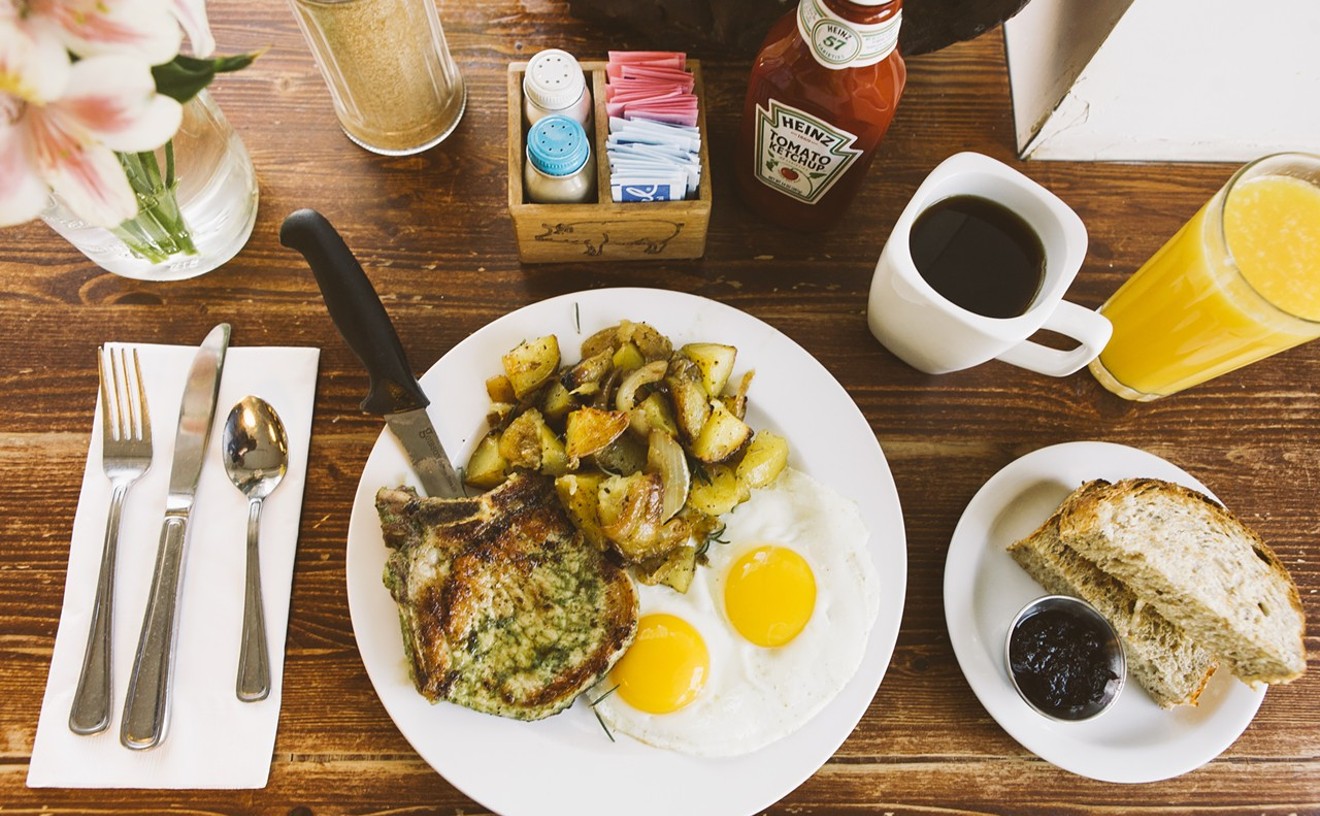 Matt's Big Breakfast
The morning after can be rough, and the last thing you want to do is stand outside in the scorching heat waiting for grub. Luckily, with a raging hangover you won't even roll out of bed until noon, and by then the line at Matt's Big Breakfast is nearly nonexistent — let the early birds stand in line pecking for space. So roll in wearing a pair of giant sunglasses, pound three glasses of water, and demolish a pile of carbs. We recommend the hog and chick (with delicious fresh jam and bread), a big stack of pancakes or the damn fine butter burger. Then head around the corner to Matt Pool's lovely bar, The Roosevelt, and start all over again.Readers' Choice: