Yeah, we're a little more partial to classic country like George Jones, Willie Nelson, and Loretta Lynn, but you've got to hand it to KMLE 108 FM for bringing the newest and hottest country pop to the airwaves. You'll hear all the hits from well-known acts like Rascal Flatts and Tim McGraw, as well as newer breakout stars like The Zac Brown Band and Lady Antebellum. The station's morning show, Tim and Willy in the Morning, is a huge hit with Valley listeners, as the irreverent dudes crack wise on local news (for a taste, check out their parody tune, "Pot Fell from the Sky," about airborne weed in Yuma, sung to the tune of Alan Parson's "Eye in the Sky").

We're all for getting into new music, but there are times when you don't feel like checking out hot new artists, and you just want to jam to something you know. Mega 104.3 FM brings the goods, spinning classic old-school jams like "Car Wash" by Rose Royce and "Genius of Love" by Tom Tom Club. Best of all, Mega 104.3 hosts the syndicated classic Art "Oldies But Goodies" Laboe from 10 to noon Mondays through Thursdays and on Sunday nights, spinning the kind of soul, doo-wop, and classic R&B that sound best late at night. Dedications are welcome, of course.

Modesty and tact aren't two of John Holmberg's better virtues. As the titular host of rock radio station KUPD's a.m. drive-time program Holmberg's Morning Sickness, the 39-year-old attempts to both entertain and offend as many listeners as possible. Same goes for the rest of his kooky cadre of sidekicks, which includes madcap man-child Brady Bogan and the show's long-suffering producer, Dick Toledo. Few things seem sacred on the show, which airs every weekday morning starting at 6 a.m., whether it's riffing on celebrities, humorously discussing the toilet habits of septuagenarian Arizona Senator John McCain, or suggesting that Arizona Diamondbacks radio announcer Greg Schulte might be gay. Holmberg's also a gifted impressionist, as he demonstrates during the program's weekly parody of the Hollywood Squares. Our absolute favorite Holmberg impression is "Buffalo Binks," a mash-up of Silence of the Lambs serial killer Buffalo Bill and Jar-Jar Binks. It was hilariously wrong in so many ways, particularly when Holmberg began doing dialogue like "It puts the lotion on its skin or else it gets the hose again" in the reviled Star Wars character's nasally twang. By the way, John, you owe us for the auto detailing we had done after spitting up coffee all over the dash.

KWSS morning man Beef Vegan has a gravelly baritone that sounds a lot like a young Wolfman Jack. It's doubtful, however, that Jack would push things quite as far as Beef does — even during his outlaw years in Mexico. Accompanied by a pair of sidekicks known as Big Buddha and Shorty, Beef mans the morning show on a low-power FM station audible inside the 101 loop. In an era when most of Phoenix's radio personalities seem to be playing it safe, hoping to lay low and avoid the axes wielded by the corporate conglomerates that own them, Beef is a breath of fresh, if pungent, air. The scruffy DJ (real name: Brad Pfirrman) doesn't have much to lose, which may be why he has a lot to say. Beef's station has only a low-power license that doesn't allow for ad sales, and he doesn't get paid to do his show, so he'll gladly play music outside his station's indie rock format or antagonize guest comedian Adam Carolla to the point that Carolla dedicated eight minutes of his own Internet radio show to dissing him. Sure, there are some rough edges on Beef's show, The Morning Infidelity. For example, it's probably not strictly necessary to put every caller on the air, even when they're totally unintelligible and possibly drunk at 7 a.m. But, hey, that's all part of the fun. You never know what you're going to get from Beef, which is a great reason to tune in.

The next time you walk around US Airways Center, consider this: An underground neighborhood — Chinatown or "China Alley," as it was once referred to — was centered right at Madison and First streets.

Census figures from 1890 put the number of Chinese people residing in Phoenix at 200, though given that many were single men living in boarding houses, the number may have been under-reported. Certainly not all Chinese residents lived in this neighborhood bounded by Jackson, Jefferson, First and Third streets, but the majority did at what may have been the height of Phoenix's Chinatown community.

There were Chinese-owned businesses such as grocery stores, vegetable stands, laundries, and restaurants. By 1899, there was a joss house, boarding houses, and another business, Dr. Ah Yim's Chinese Tea and Herb Sanitarium on First Street just north of Madison. In 1910, the three largest restaurants in Phoenix were Chinese-owned.

But this being our "underground" issue, we have to mention there were some pretty persistent and salacious rumors, too — mainly that a system of subterranean tunnels criss-crossed underneath Phoenix's old Chinatown, connecting dens of inequity.

This was such a long-held piece of gossip that a man recalling his Phoenix childhood in 1982 in an article in the Arizona Capitol Times says there was "conviction among the youth of Phoenix that Chinatown lay over a sinister maze of tunnels and underground rooms put to god-knows-what use. Stories about mysterious goings-on were common."

While it is true that after 1909, gambling and opium smoking were illegal in Arizona, both were still available in Chinatown, and opium joints and gambling dens, visited by both Chinese and white residents, were raided occasionally by law enforcement. We found this gem from the Arizona Republican (March 9, 1910): "Four opium dens were discovered, all in full blast, and packed to the doors with hop-smoking Chinks."

And a Republican article from March 17, 1923, said officers involved in a narcotics raid "made human rats of themselves in exploring the underground tunnels which played an important part in the narcotics activities of the men taken into custody. A majority of the dope taken in the raid was discovered in these subterranean passages."

So there were definitely sensationalized reports in Anglo newspapers, but was there any real evidence to support the rumor that a vast network of underground tunnels existed?

In 1989, archaeologists undertook a survey of the site around the arena prior to its construction and published a report of their findings. Their dig did unearth evidence of narcotics use and gambling (through fragments such as opium cans; see other artifacts, pictured above) found in basements of formerly Chinese-operated buildings, but there was no mention of a system of tunnels.

The terms Chinatown and "China Alley" were used by Phoenix newspapers and on maps up until the 1940s, to describe the area. But by that time, local Chinese populations had chosen consciously to integrate and scattered throughout the city.

"My name is Westley Allen, I think — let me check my notes." That's a direct quote from Westley Allen, who hosts Erratic! Radio each Tuesday night on KWSS 106.7 from 8 to 10 p.m. Allen plays the best in garage, punk, and crude-ass rock 'n' roll, spinning tunes from all over the map, like garage-rock stars The Black Lips and head-scratcher selections from polka man Frankie Yankovic ("Weird" Al's pops), while hosting music from local and national bands like The Limit Club, Labor Party, Cat Party, Digital Leather, and more. Sometimes Allen broadcasts live from clubs like The Rogue, but even when he's in the studio, there's a wild, anything-goes feel, something that's sorely missing from the FM dial in Phoenix.

Jacy Shepherd mans the boards at Wickenburg's Real Country 96.3 FM (you can pick up the station here in the Valley, no worries) from 4 to 7 p.m., and her sultry, smooth voice works wonders toward easing the pain of afternoon rush-hour when paired with modern country hits from the likes of Blake Shelton and Trace Adkins and classics like "Big Bad John," by Jimmy Dean. The freeways may lock up during her shift, but Shepherd has a calming style, whether she is practicing her Spanish on air or just playing the part of the "aw shucks" country girl and remembering the clouds of dust in her rearview mirror as she drove down dirt roads in her past. Yeah, we wish.

Medical marijuana in Arizona went from pipe dream to reality, thanks to the grassroots movement by the pro-Prop 203 Marijuana Policy Project and its leader, Andrew Meyers. Meyers and MPP collected about 250,000 signatures last year to get the initiative on the November 2010 ballot. The measure passed by a narrow margin thanks to countless hours of campaigning by Meyers and other supporters. The future of the law is still in the weeds, but it's important to give credit where it's due. Congrats, Mr. Meyers.

We've heard a few whoppers from politicians in our time, but none tops what onetime Phoenix City Council candidate Gary Whalen told a New Times staffer earlier this year. It was discovered that Whalen, a Tea Party Republican, had been in a scuffle with his live-in boyfriend. The cops were called and a report was written stating that a drunken Whalen threw the partially naked man out of his apartment. Awkward. When contacted by New Times about the scuffle, Whalen actually denied being Whalen. He then called back shortly after — from the same number we called. Sure enough, "Gary Whalen" popped up on our caller ID. The man claiming to not be Whalen then explained there was a mix up: It was "Gaby" Whalen who was involved in the scuffle. Sure, "Gaby" Whalen was mistakenly written on one of several court documents, but the error later was corrected by court officials. Of course, it was Gary who got into a fight with his boyfriend — and who spoke to New Times. He ended his candidacy the next day. 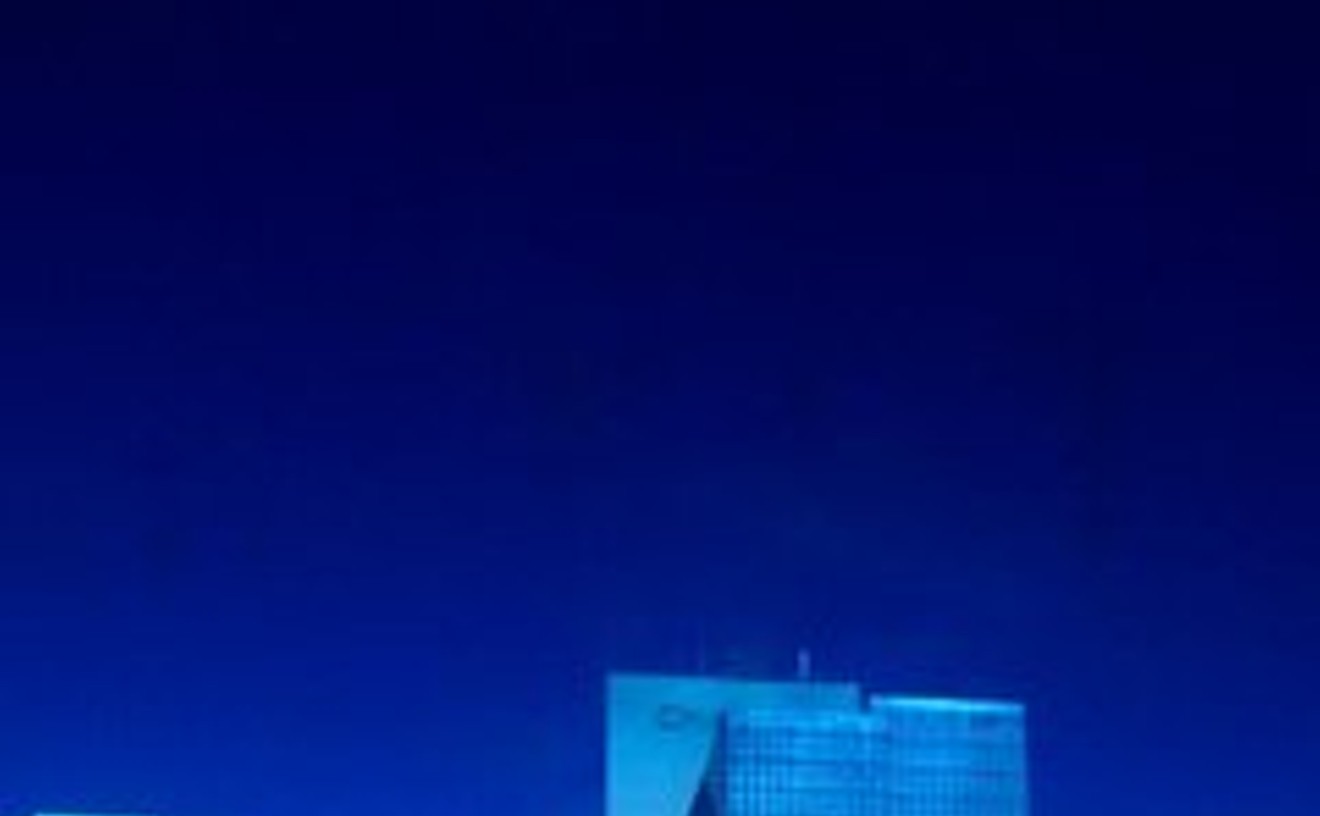 Tucked beneath the lobby of the tallest building in the state, this sprawling underground atrium originally served as a mini-mall for the building's 2,100 employees. Recently remodeled as part of this 40-story skyscraper's $14 million upgrade, most of the stores are long gone, but in-the-know downtowners still ride the escalator down to hidden gems like the Coin Room cafeteria. More important, this surprisingly airy basement is also a soothing reminder of 1970s-style corporate Zen. Sitting here in climate-controlled perfection, surrounded by well-dressed business types and staring up at the high-rises out of every window, you're transported to a time when downtown Phoenix really was the center of the Valley's universe. Now if someone would just bring back the old penthouse dining space spanning the 37th and 38th floors and featuring killer 360-degree city views from nearly 500 feet above the Valley floor.