Best Place to Learn the Science of Guitar-Making

Don't get us wrong; we applaud anyone who knows how to play a mean guitar. But we must say, we're even more impressed by someone who knows how to build one. Chances are good that if they do, they learned it at the Roberto-Venn School of Luthiery. Since 1975, Roberto Venn has been attracting students of all makes and models: high school graduates, aspiring musicians, retired guitar enthusiasts, and even those who already know a thing or two about being a luthier. They come from all over the globe to commit to an intensive 10-hour-a-day, five-day-a-week, five-month semester of certified higher learning in the art of luthiery.

Graduates of the Roberto-Venn School go on to develop their own guitar brands or are scoped out by big-name companies like Fender and Gibson. Classes are capped at 40 students and often require waitlists in both the spring and the fall sessions. So if you're ready to quit that desk job and pursue your musical dream, you'd better sign up fast. See a slideshow here. 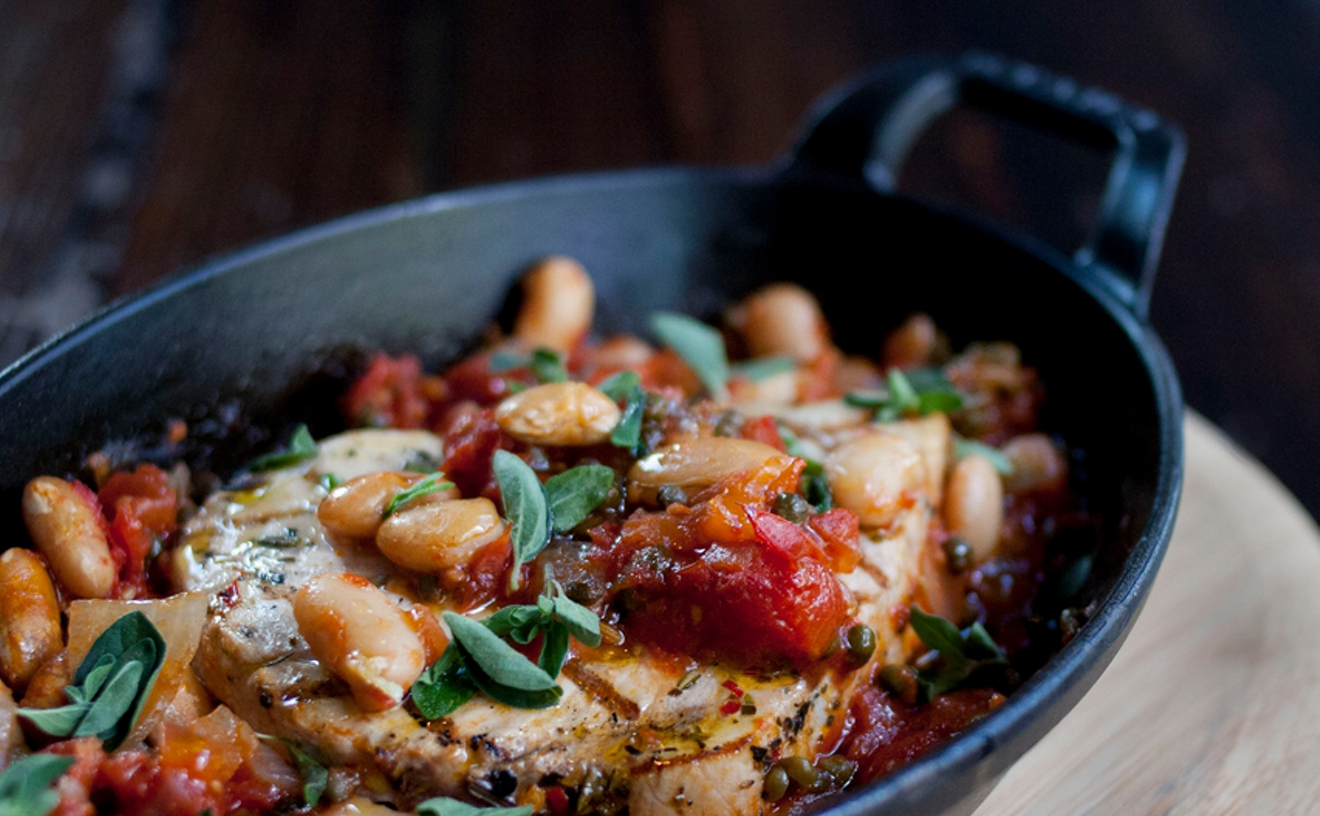 Smart, sassy, super-cute, and a master of her cocktail craft, Shel Bourdon is the gal behind the outstanding cocktail menu at CityScape's Blue Hound Kitchen at the Palomar Hotel. The 24-year-old mixologist and lead bartender created the restaurant's entire menu of handcrafted cocktails that are classic, down-to-earth, and, most important, drinkable. The California transplant's creations are the perfect complement to executive chef Stephen Jones' exquisite comfort food, and Shel or one of her well trained bartenders are always happy to give you cocktail pairing suggestions. Try one of Shel's beer cocktails like the Screaming Scot with grouse blended scotch, honey syrup, lemon, egg white, espresso, and wheat ale or a hangover pick-me-up like the refreshing Absinthe Fizz with Beefeater gin, Pernod absinthe, lime, honey, and cucumber. Straightforward and classy — just like Bourdon.

Husband-and-wife team Bill and Lillian Buitenhuys are more than just cocktail enthusiasts — they are straight-up cocktail scientists. The pair has been making their own infused bitters for the past couple of years in their Gilbert kitchen, experimenting with flavors ranging from a bright herb orange in the Orange Sunshine to the warm and sweet Figgy Pudding. Using as many locally sourced and indigenous ingredients as possible, the Buitenhuyses make extremely small batches of their cocktail highlighters in mason jars that sit for about a month. Fruit, bittering agents, simple syrups, booze, and spices all mingle together to create the end result. The couple received the green light from the U.S. Alcohol and Tobacco Tax and Trade Bureau to market their bitters as a food product, so their products should be hitting the local shelves sometime in mid-November. Until then, be on the lookout for the little eyedroppers of bitters behind the bars of several restaurants around town. (We could tell you who's using Bill and Lillian's liquid gold, but then we'd have to kill you.)

All anyone could talk about after this year's Coachella Festival of Music and Arts was Tupac, an artist 16 years in the grave (despite all that buzzy clatter you hear to the contrary). Pac was resurrected by AV Concepts, an audio-visual company based in Tempe and San Diego. They utilized a Musion Eyeliner screen and a 30-by-13-foot project screen to create a 3D, true-to-lifesize projection of Pac in the midst of Dr. Dre and Snoop Dogg's set. It was a stunning, freakishly life-like performance, and while it went down in the history books as one of the most surprising moments in Coachella history (well, the first weekend anyway), it immediately set off rumors of copycat holograms, like Lisa "Left Eye" Lopes with TLC and Freddie Mercury with Queen. AV Concepts, you've worked up some strange feelings for us all (could a Beatles reunion be far behind?), but the trick was a stunning one, indeed.

Barry Schwartz deals in volts and watts. The local artist and electricity aficionado creates large-scale installations and hosts experimental performance pieces, of sorts, with found and donated electrical equipment and high-voltage results. He was once a bigwig overseas, where he installed large-scale pieces in Germany, but nowadays, you can find him tinkering around and testing sockets at the Icehouse in downtown's Warehouse District, where he hopes to open the city's first electricity-themed bar. Countless elements of Shocklick Lounge will rely on electricity, Schwartz says, while testing shock-sending benches and pulling bottles along long conveyer belts. Schwartz has hosted a few late-night parties there, but the space is far from finished — he says he still has a lot of experiments to run and equipment to move around. Shocking.

John Cavanagh's been crafting small batches of tonic (as in "gin and") since 2008, but the heady elixir really took off this year, with a glowing Wall Street Journal writeup and a New Times Big Brain culinary award. The concentrated syrup's easy to ship and store — simply add soda water to reconstitute. Snag some on the spot at sister cafés Tuck Shop and Astor House and, as Cavanagh suggests, carry it around to mix your own drinks in bars. It also makes an ultra-classy gift for friends who are good hosts, those who like local and natural products, or anybody who's damn picky about their gin and doesn't want to fuck it up.

The interior of the Nina Mason Pulliam Rio Salado Audubon Center in South Phoenix tends to be filled with people during the evening hours on every third Thursday of month. Why are they here? The answer is twofold: sex and cheap beer. Both enticements are a major part of the monthly Birds 'n' Beer event. Valley residents pack folding chairs inside the main building of the riparian preserve to fill their bellies with brew and their brains with science. It's a hopped-up scientific soiree that gets plenty silly at times, and it benefits the center's educational and wildlife preservation programs. Attendees can snag cans of Four Peaks craft brews Hop Knot IPA and Kilt Lifter for a $2 donation. After an hour-long mixer among the nature displays in the lobby, everyone grabs a seat for an informative — and typically cheeky — lecture from guest speakers and local scientists on any number of topics. Much of the time, the subject pertains to the sex lives and mating habits of such flora and fauna as sea lions, frogs, plants, or pretty much anything else that reproduces, as well as the occasional oration on bird nesting or the flight patter of bats. Needless to say, the brew-infused, often-humorous nature presentations have become incredibly popular with the public, as a diverse crowd of granola-crunching nature lovers, swanky urbanites, bookish geeks, and curious retirees turn out to learn tidbits concerning courting behavior or watch footage of sea life doing what comes naturally. All that's missing is Marvin Gaye crooning "Let's Get It On."

What our brains do while we're asleep has been studied in labs by researchers and sleep experts for decades. Our brain waves have been charted, our twitches, snores, and movements documented, and our dreams written down for use in studies around the globe. But until recently, scientists have been hesitant to research and document lucid dreaming, which differs from conventional dreaming in that the person who is asleep is aware he or she is dreaming and can control and redirect what's happening in the dream (as opposed to being an observer). The science of lucid dreaming and how our brains ultimately can control what happens in our dreams is now debated ad nauseam in the science world, as it's associated with dream-obsessed wack-jobs and fans of films such as Waking Life and Inception, but it's also an activity encouraged by a variety of sleep psychologists who cite a broadening of the imagination and an increase of awareness in daily life.

Dr. Gary Schwartz, a professor of psychology, medicine, neurology, and psychiatry at the University of Arizona and director of the Laboratory for Advances in Consciousness and Health, is a household name in lucid-dreaming circles and online forums. He's published a collection of papers on spirits, dreaming, and alternative realities that have been called into science-based question, but Schwartz insists he's a scientist who bases his conclusions on data. Schwartz says lucid dreaming is a powerful tool that needs to be studied more in today's sleep labs and university studies. "It's like a knife, which is a neutral object used in skilled hands for surgery and healing," he told New Times in 2011. "But when it falls into the wrong hands, it can be used for destruction."