It doesn't take a lot to convince us of the importance of eating your vegetables, but when it comes time for Pat Duncan's annual "Farmer in the House" dining series, we'll happily devour every leaf and sprout. Duncan has been hosting the spring dining series for a while now, holding a run of six-course wine-paired dinners with the Valley's top chefs and state's best wineries. Each of the menus, crafted by such notable names as Kevin Binkley and Vincent Guerithault, showcases the exotic fruits and vegetables of Duncan's boutique farm in Litchfield Park. If the veggie-friendly (though not strictly vegetarian) dinner doesn't have you feeling pretty good already, have an extra dose of good karma knowing that a portion of the proceeds from every event go to benefit the Association of Arizona Food Banks. Though not a competition, we have a feeling the chefs enjoy attempting to out-creative each other throughout the season. 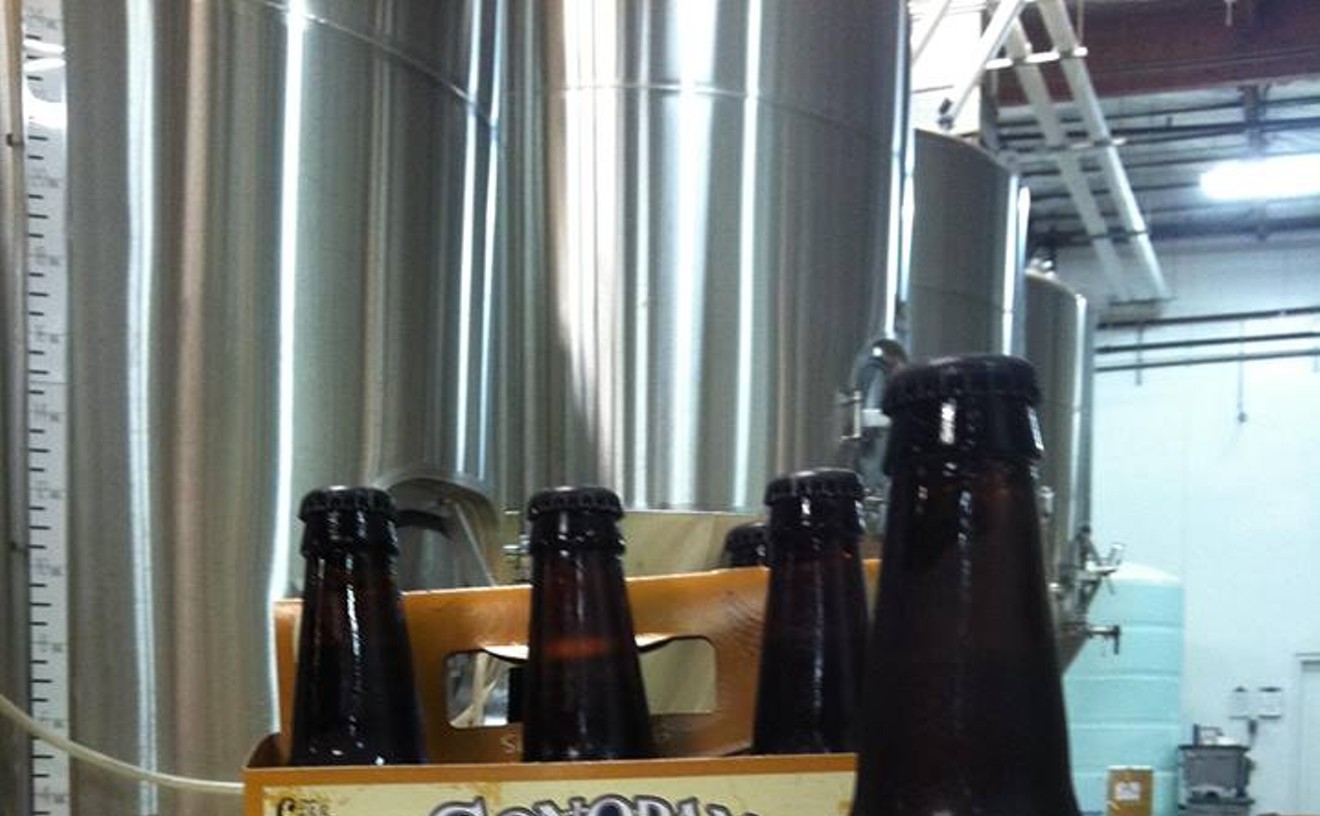 Beer and food already are deeply related on many levels, from the ingredients used to make them to the flavors each delivers to our mouth holes. So why not get an expert in food to help you craft a beer? About a year ago, Sonoran Brewing Co. thought just that, and so launched their inaugural Chef Series — a set of seasonal brews created in collaboration with Arizona's finest food artisans. From the mystifying 7 Wives Saison (brewed with green peppercorns, fennel, and mesquite syrup) to the complex Long Strange Trip (brewed with apricots and aged with Scotch), they challenged our taste buds. But it wasn't the flavor that kept us anticipating the next release. It was the outstanding display of commitment to local eats and peeps, for not only did Sonoran use our city's indigenous ingredients and chefs, it also gave back a portion of the sales of each beer to local charities. 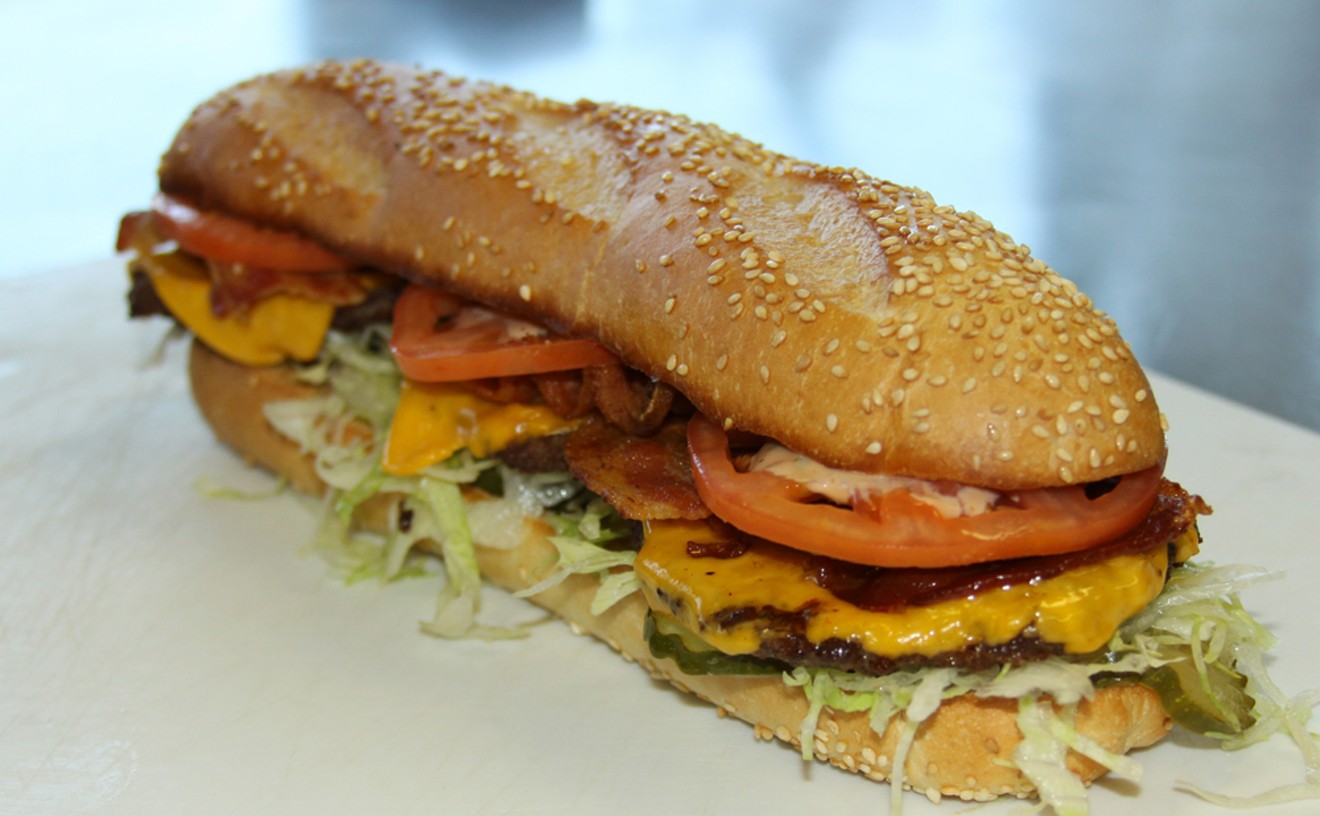 The name aside, our favorite thing about this strip-mall joint is neither burgers nor subs. It's the gigantic selection of bottled sodas we thought had fallen off the face of the Earth. Looking for the vintage vibe of a glass bottle of Coke? Check. And Rocket also stocks Faygo, Squirt, and Jolt, as well as scores of other brands and flavors of soda we hadn't even thought to search out. A wall of refrigerators stretches the length of the entire restaurant, holding a dozen different brands of ginger ale and more than 50 types of root beers — or if you're getting real vintage with it, sarsaparilla. In total, this place offers about 300 types of sodas or pop or whatever you want to call it. Rocket Burgers doesn't say it stocks every kind of soda imaginable, but we'd venture to guess that if what you're looking for still exists, they'll have it here. 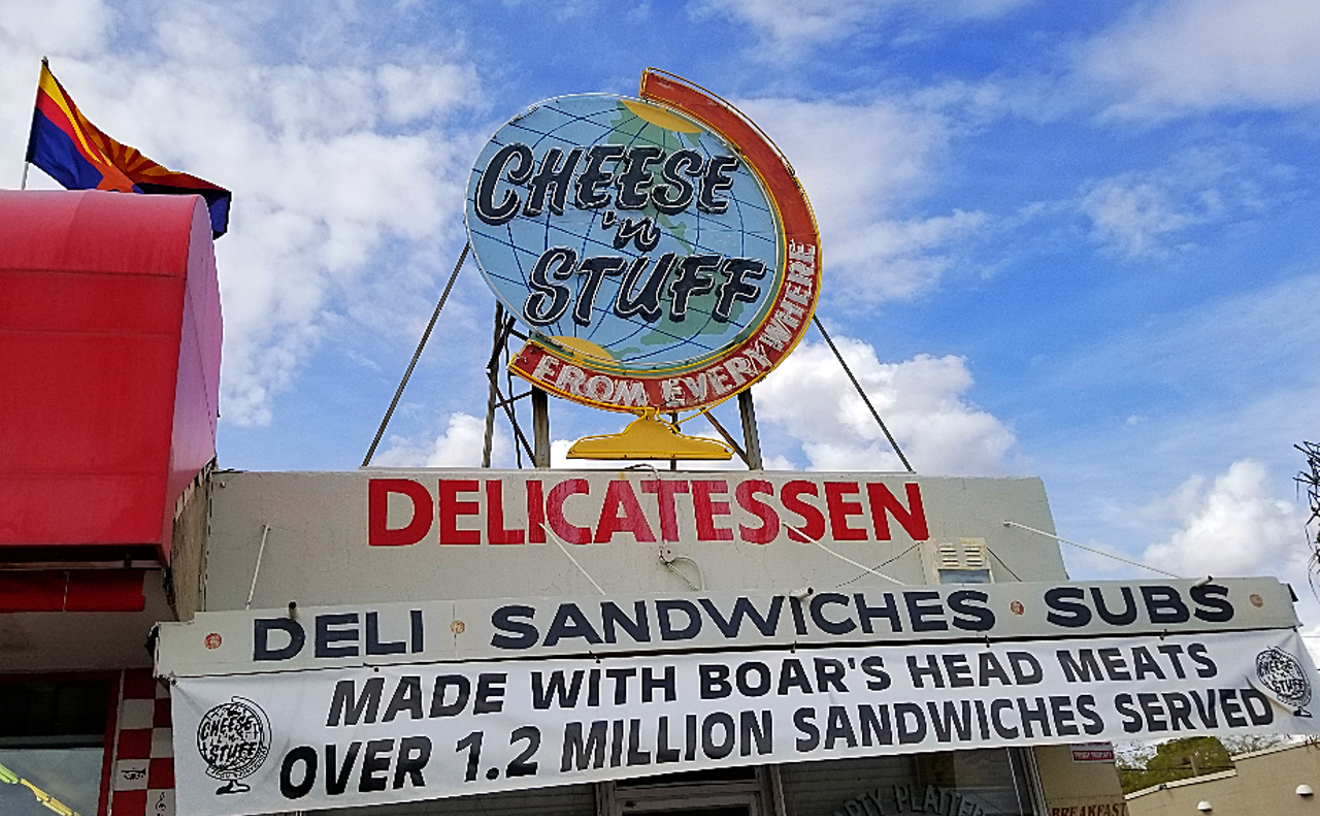 Before "Metro Phoenix" even existed, there was Cheese 'n Stuff, the Central Phoenix deli that's been serving sandwiches and sides since 1949. It's a you'll-know-it-when-you-see-it sort of place. Even on the outside, it doesn't look as though it's changed much since opening. Step through the door beneath the iconic globe sign and it's like you've taken a trip back to the days when places like these — not Subway — were a dime a dozen. Owner Stan Zatwakski and his family will be behind the counter, nearly buried beneath the handwritten selections and dozens of "specials" typed up, printed out, and appended (seemingly, for good) to the menu. If you want to go real old school, then you'll have to get The Doughboy, an ultimate comfort-food sandwich with deli turkey, bacon, creamy avocado, and mayo on grilled sourdough bread. But, of course, you can't really go wrong with any of the options at this famous little deli that could.

If your heart skips a retro beat at the thought of old-school milkshakes, whoopie pies, and 1960s leopard-skin pants for a song, you'll want to pay a visit to this way-cool Arcadia shop, which has them all. Owner Trejsi Mulac is usually manning the soda fountain, where diners belly up with cherry-topped sundaes, fizzy sodas, and signature shakes such as the feisty Sophia Loren and the Adam 12, made with chocolate malted crunch and a shot of toasted marshmallow. Resisting the glass cake stands filled with daily changing homemade delights like brownies, cake pops, and whoopie pies is futile — as is the shopping. Those leopard-skin pants aren't going to buy themselves, you know. 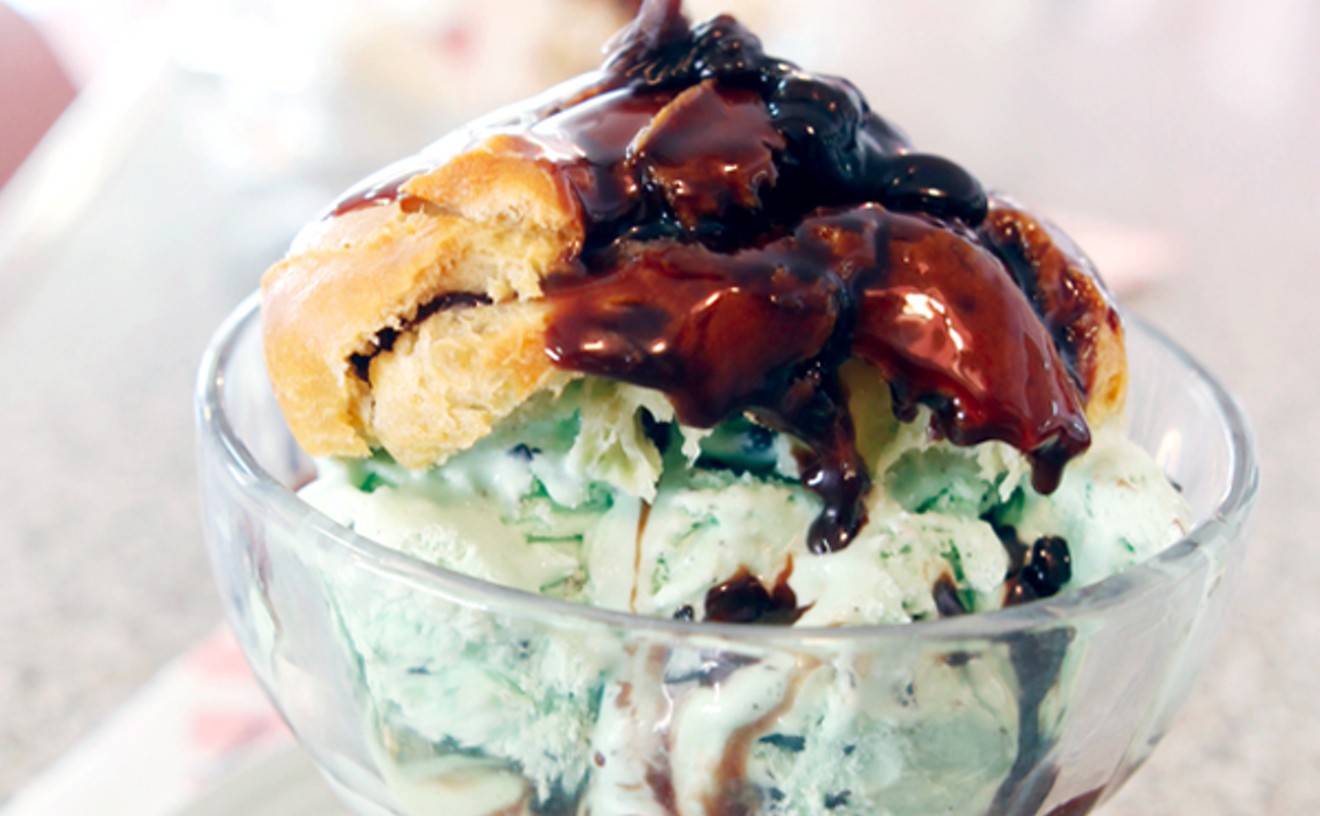 What more can you ask from a restaurant than the Family Circus stamp of approval? Bil Keane's art has graced the menu at Sugar Bowl, the ice cream parlor that's been satisfying young and old alike since 1958. In fact, the late Keane featured Sugar Bowl many times over the years in his long-running comic strip. But that's not the only reason to stop by. The menu not only features rich ice cream and classic treats, like sundaes and the signature "Camelback Soda," but also hits all the other food groups with kid-friendly burgers and hot dogs and salads or a tuna melt for the adults. A big room adjacent to the vintage soda counter is perfect for a birthday party — and, of course, the whole place is dolled up in Pepto-Bismol pink. A Scottsdale classic. 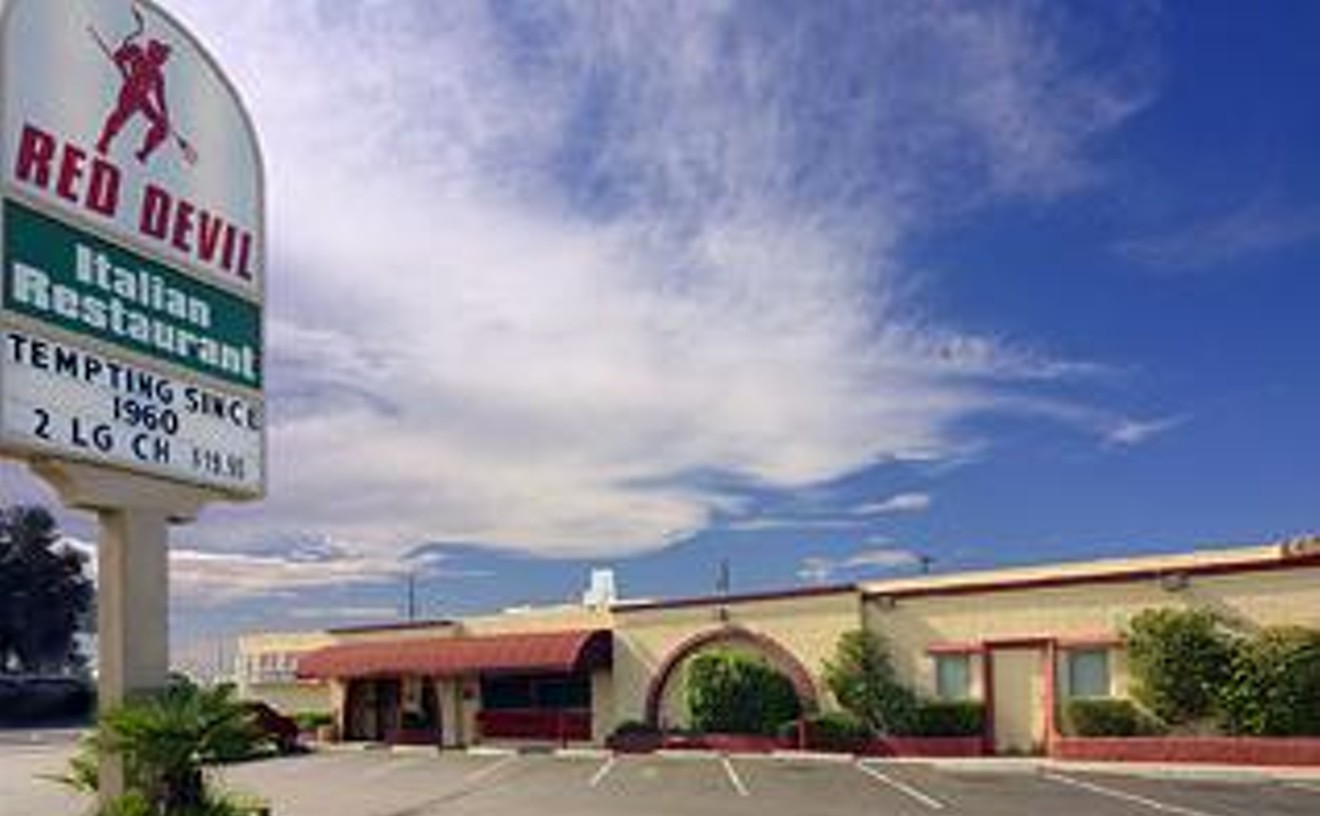 Nothing much has changed about the McDowell location of Red Devil since we started eating there in the 1960s, and that's fine by us, because this local treasure makes some of the best pizza in town. There's nothing gourmet about the fare or the digs — just good, classic Italian cooking by the same family for more than 50 years. Over the years, other locations have popped up, and the food's always good at them. But for us, nothing's quite the same as sitting in one of the old booths in the McDowell spot that we've frequented since childhood.