Talking about something other than politics in the household of Linda and John Kavanagh must be next to impossible. Having moved to Arizona in 1993 from the East Coast, the popular couple from Fountain Hills — now married for about 40 years — had a little experience in government before rising to respectable offices in their new home state. He's a former Lafayette, New Jersey, town councilman, and she was on Lafayette's planning board and the board of directors of their children's private school. John Kavanagh, a retired Port Authority of New York and New Jersey police detective with more than 20 years on the force, was first elected to the State Legislature's Eighth District in 2007 as a Representative. He's a hardcore conservative whose antics occasionally annoy even other Republicans, including igniting a national firestorm in 2013 with a proposed law that would have made it a crime for a transgender person to use a bathroom not designated for the sex listed on the person's birth certificate. He was elected to the State Senate's District 23 in November. Linda Kavanagh, who bills herself as pro-business and a tireless public servant on a plethora of civic organizations, is now serving her second two-year term as mayor. They're putting their synergy together to shape Arizona's future — for better or worse.

Jai and Suriya at the Phoenix Zoo 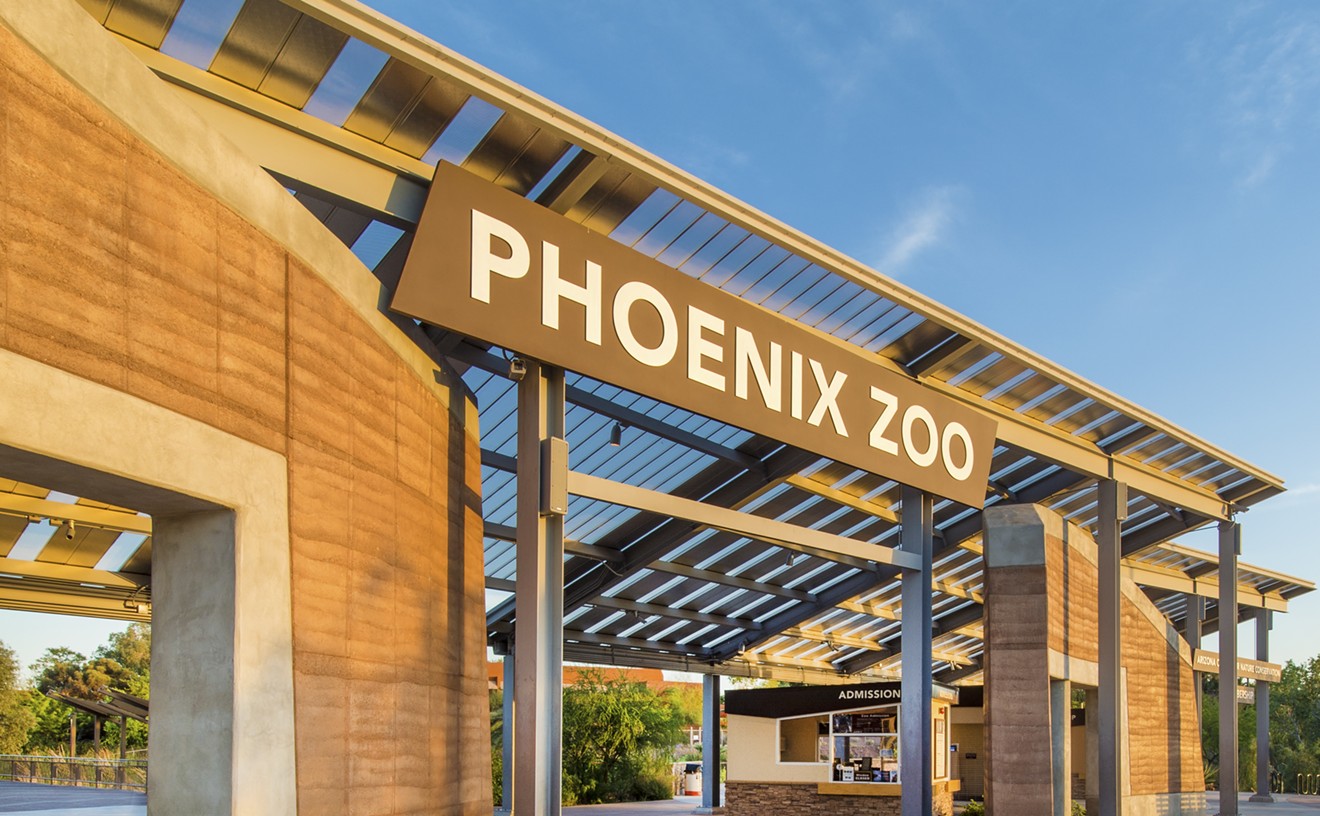 We enjoy a good kitten YouTube video from time to time, but nothing beats watching an adorable one in person. Especially when it's a striped baby tiger, and still at that age when it probably won't maul us to death. Fingers crossed, the Phoenix Zoo will become home later this year to a Sumatran tiger cub. The zoo has housed Jai, a full-grown male tiger for a while, but his bachelor days are over; earlier this year, Suriya, a stunning female tiger from Oklahoma came to town. The zoo is hoping they mate because Sumatran tigers are a critically endangered species — there are fewer than 400 living in the wild. And though we're all about preventing unnecessary extinction, we're also pretty stoked for what we're picturing to be a modern-day Simba-Nala love affair (only with real tigers, not cartoon lions).

Believe it or not, it's possible to be a Republican politician in this state without peddling conspiracy theories, pandering to the extreme right wing, and promoting oppressive legislation. Republican Representative Jeff Dial is proof of this, and he's a Republican whom even Democrats can love. While many of his colleagues are trying to turn back the clock, Dial's agenda is largely forward-looking, trying to keep Arizona ahead of the curve, especially when it comes to technology. When the extreme wing of his party attempts to pass legislation that benefits special interests more than the people, Dial's one of the small number of Republican lawmakers who actually will say "no."

It's one thing to have an interesting story. It's a whole other thing to know how to tell it. Kim Porter has perfected the art of putting others in her shoes. The Tempe-based writer and actor has won three L.A. Weekly Theater Awards, two Los Angeles Drama Critics Circle Awards, and one of New Times' very own Big Brain Awards for her work at downtown's Space 55 Theatre. When she's not working behind the scenes on larger scale projects — a book, a play, perhaps the next New York Times bestselling memoir — Porter has been found sharing stories about her past at events like The Most of Lit Lounge and Scottsdale Public Art's Water Logged. Though her stories are always a surprise, there's one outcome that can always be expected: A show featuring Kim Porter is primed to sell out.

Ask Olivia Gardens how she got her name and she'll put it simply, "I love Olive Garden." Wigs, falsies, and heavy eye makeup aside, this drag queen keeps it real — and busy. The former Miss Phoenix USofA, Miss Phoenix Gay Pride, and Miss Gay Phoenix America has hosted a slew of weekly events — her current one being Garden Variety Revue, Wednesdays at Kobalt. She may not be as buxom as some of the other broads on stage — in fact, she has a toned body that many of us might kill for — but Miss Gardens knows how to keep her shows entertaining. A pleasantry here and a penis joke there, she's nuanced in playing it naughty and nice.

Remember when the tornado sent Dorothy flying over the rainbow, transporting her from a world of black and white to one of quirky technicolor? That's exactly how we felt when we first laid eyes on the highly saturated and subtly sinister work of Scott Wolf. The lowbrow artist, who has been raising eyebrows all over Phoenix, appearing in galleries such as MonOrchid, R. Pela Contemporary, and Willo North, has found a talent in flipping the wholesome family on its head while playfully flipping the bird to mainstream marketing. The Mesa-based painter and digital manipulator blends perversion with pop culture, creating a twisted take on Americana with the help of violence and sexuality. Between children with chainsaws and bunnies birthing Easter eggs in the Virgin Mary's Arms, Wolf's work is so wrong it's right.

For her masters of fine arts thesis show, ASU student Samantha Lyn Aasen presented one of the most exciting exhibitions of the year. Titled "Sparkle Baby," the mixed-media show featured photography and installations that assaulted the pretty pink princess cult of femininity that's marketed at young girls and women, who are expected to love glittery nonsense while also embodying perfection and oozing sex. Particularly amusing was her skewering of the vajazzling trend (you know, the one in which women glue rhinestones to their waxed vaginas). She crafted a display wall of options, including ones that spelled out "party girl," "brat," and "do me" in sad, shiny plastic.

When Natasha Duran-Lynch debuted her fashion line Hues of Ego at Phoenix Fashion Week 2014, it was met with all-out excitement. Perhaps more surprising: The enthusiasm was warranted. Though she looked like a frontrunner in the competition, she didn't end up winning the emerging designer of the year title. The Scottsdale-based designer made a memorable showing in white, black, and pink with dramatic, airy headpieces, sculpted gowns, and chic coats. She will return to Phoenix Fashion Week's emerging designer competition in 2015, and we have a feeling her second go-round will include a showstopper or two.

Carley Conder just might be the Valley's most recognizable dancer. It's an honor she's earned by working year-round on a slew of movement projects. Not only does the Tempe-based contemporary dancer and choreographer helm her own company, CONDER/dance, she also teaches dance at ASU and Scottsdale Community College, routinely performs original pieces at venues including ARTELPHX, and puts together the annual Breaking Ground festival, which features debut dance and film works from around the world. Our feet are tired just thinking about all the running around. But leave it to Conder to keep on moving.

We see very little from local playwrights, a rare breed whose work is usually relegated to workshop productions before being tucked away forever. Richard Warren is one among a very few exceptions. This year, a staged reading of Warren's Revocable Trust received a lot of attention. His adaptation of theater legend Dale Wasserman's memoirs, Burning in the Night: A Hobo's Song, was performed in two local playhouses. And at Theater Works in Peoria, Warren's Shifting Gears — a full rewrite of Pollywogs, a two-act Warren wrote back in 1999 — trod the boards in the black box McMillin Theater. The improved and retitled version received a pair of workshop productions at Phoenix Theatre, followed by a full production at Sedona's Canyon Moon Theater before Theater Works' executive director Daniel Schay, who directed the recent production, signed the play. The result was a small, talky story that ponL.dered a recent world in transition, circa 1961, and received generous reviews from every corner.