Since 1974, Changing Hands has been synonymous with Phoenix's book culture. Currently operating two shops, one in Tempe, the other in central Phoenix just off the light rail, Changing Hands has more going for it than the best and most diverse selection of literature in Phoenix (though it certainly has that). What truly sets the shops apart from other book nooks is a dedication to community. Whether hosting family workshops, book club discussions, or lively author Q&As and signings, Changing Hands makes it clear that people who read together grow together, and Phoenix is better for that commitment and inquisitive spirit.

Small? Yes. A good selection just the same? Also yes. Among the loud banter and busking of Mill Avenue, you'll spot the hanging sign for Old Town Books just south of Fifth Street. That is, if you don't first spot the small, mobile bookshelves wheeled out onto the sidewalk, or the imaginative window display they have going on. Owner Chris Smith has run the bookshop since 1984, and settled into the Mill Avenue storefront in 1987. The narrow bookstore has all the same sections as a larger shop, so you'll find titles delicately crammed in any shelf space available, along with copy paper boxes filled with books along the edge of the floor. Those interested in Arizona, Native American, and Old West history will find a good mixture of titles on the north shelves, while others can look for the vintage, first-edition, and out-of-print books the shop has to offer. Oh, and one more thing: It's cash only.

A sister bookshop to the Arcadia location, Book Gallery is set in quaint downtown Mesa in what used to be a movie theater — and you can tell, too. This spacious bookstore has a main floor, and the back of the shop splits off into an upstairs and downstairs area. The store is packed with books on tall wooden shelves equipped with rolling ladders and decorated with posters, author images, and just cool stuff overall. Toward the back and up the short staircase, you'll find a fiction section with books in hardcover and paperback, and many with little bookmarks sticking out the top reading "Signed." Around the corner is a whole wall of Western-themed novels and pulpy paperbacks. Of course, there are plenty of nonfiction books about the American West and its history, covering every figure from Teddy Roosevelt to Quanah Parker to Kit Carson. You can also smell that this old bookstore has been around for 30 years, but in a good way. 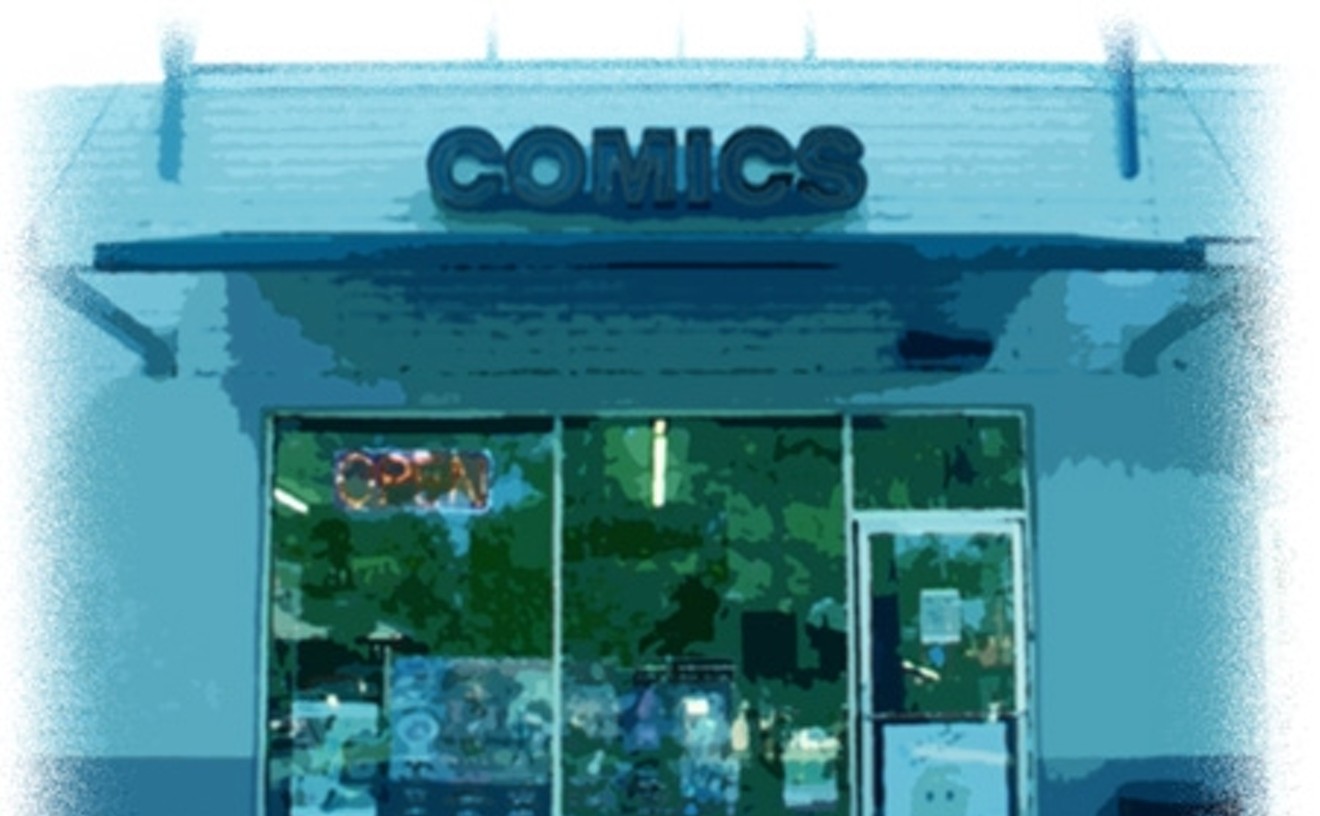 Don't listen to the print media naysayers: Now is a great time for comic books — maybe the best time. More diverse comics are being printed than ever before, and the quality's never been better. Doubt it? Stroll into Ash Ave Comics & Books in Tempe. The neighborhood mainstay has all the big names — check out the Wonder Woman and Spider-Man titles if you dug those silver-screen blockbusters — but also a heady selection of underground, autobiographical, sci-fi, horror, and left-of-center fare. Owner Drew Sully has a distinct grasp on it all — he's the kind of guy who can clue you in on obscure Marvel trivia as well as dive into Japanese manga and Alan Moore's legendary run on Swamp Thing via the Ash Ave Comics Book Club, which meets monthly.

Anyone can toss together some flowers. The staff at Camelback Flowershop goes above and beyond, blending locally sourced plants (along with flowers from small producers in California, Oregon, and Washington) with an aesthetic that subtly mixes natural beauty with a modern, industrial touch. It's a low-stress spot, too, with arrangements casually — but always artfully — displayed and same-day delivery of bouquets, gift boxes, succulents, home goods, and art. But owner Teresa Wilson's design sense isn't restricted to the shop: By offering classes and workshops, Wilson offers you a chance to extend her thoughtful touch to your own home.

There's an oasis in the middle of Phoenix. As you enter, the scent of hundreds of colorful flowers will flood your nose, and it will feel like the temperature of the air around you drops several degrees. And no, you aren't losing it. Those are the calls of macaw parrots cutting through the air. This is Dig It Gardens. In addition to gorgeous flora (and even some fauna) blooming from every corner of this plant haven, Dig It features the best selection of native desert plants in the city. Add in the expertise of the owners and staff, and even the most novice horticulturist will be cultivating their own green thumb in no time.

To twist a line from Apocalypse Now, the light and space of Sky High Smoke Shop can really put the zap on your head. Enter while buzzing at your own risk. The sheer number of shiny glass pipes and bongs in Sky High is in itself dizzying. Two walls are lined with rows of top-quality water pipes, the displays rising above cabinets of bubblers and pipes of all colors. A tall case in the middle of the shop has shelves packed with dabbing rigs and gear galore. Be prepared to spend a while here assessing your choices. Sky High has cheaper glass and acrylic to consider, too. Perhaps best of all, the store seems like it's always open. Stop in after breakfast at 9 a.m., or just before breakfast at 2 a.m. on weekends. This is especially convenient when your own glass equipment inevitably breaks, or if you unexpectedly receive stuff to put in a pipe but don't have a pipe. Sky High's friendly employees are the icing on your baked cake.

Some medical-marijuana dispensaries have nicer showrooms. Some get you to the cash register quicker. But Bloom has something most others don't: quality cannabis on the cheap. The typical price for an ounce of decent weed at Bloom these days is $185, which can be substantially less expensive than other outlets. It's difficult to compare strains at different dispensaries, because the products with the same name often aren't grown from the same crops. But for many strains, only a purist or connoisseur could tell the difference between one premium sativa or indica versus another. An ounce of good-looking, high-THC buds might cost you $250 or even $350 at dispensaries that claim their product is much better. Bloom's concentrates are cheaper, too, with a half-gram of shatter usually going for $20 instead of $25 or more. Yes, you can find good deals or discounts occasionally at other places, and it's good to shop around because cannabis prices everywhere in Arizona are falling. But Bloom's lower prices have been a consistent feature of the dispensary for the past few years, which is very cool. Paying $100 less for an ounce of indica or sativa at Bloom will surely help your pain, or whatever else ails you, because you'll have money left over in your pocket. If you're a frequent flier, cost is probably your biggest concern. So go to Bloom, and be less concerned.

Some say this purplish bud first came on the scene in 2009, its scent reminiscent to some of a newly opened box of Thin Mints Girl Scout cookies. The indica side of this hybrid strain gives it a mule kick of an effect, but the real stuff also has a buzzy sativa feeling. How do you know when you get real GSC? Ask a botanist — otherwise, you may never know for sure. The strain's popularity has undoubtedly led to creative labeling. And worse for GSC lovers, the strain has been vanishing from local dispensaries like its namesake would in any cannabist's kitchen cabinet. The stash itself isn't going away, but its name is. That means GSC may be found under other names these days, so look out for those initials and any alternative spellings. See, the real Girl Scouts are sort of pissed at the marketing ploy. The venerable club's green logo has been tarnished, leaders think. They've threatened dispensaries in Arizona and other states with legal action unless they changed that trademarked name. Most did, but mom-and-pop shops in rural areas probably haven't gotten the message yet. Whether it really is GSC or not, as in the fashion world, sometimes it's the label that counts. But if you get your hands on some actual GSC, you'll know it by either the soft, cookie scent, or the wallop on your brain.

Put this on your "how to lose a weekend" list: Nature's Medicines' Nature’s Vapes Live Resin Pen cartridges, indica strain. No muss, no fuss — screw the cartridge into a vape-pen battery and inhale. Best of all, no singed fingertips, because unlike dabbing concentrates like crumble or wax, which is like trying to learn glass-blowing, a vape pen is probably not going to hurt you. This oil product set us back $40 for a half-gram, 350-milligram cartridge. The box said the indica strain is derived from the company's AMF OG strain, which is a cross between Obama Kush and Skywalker OG. AMF stands for "adios, motherfucker." The concentrated oil version provides a solid, heady sensation that settles into a cloud-like body high. Nature's Medicines promotes the liquid resin as pure cannabis oil — that is, it contains no additives that didn't spring from cannabis plants, and is about 70 percent THC. The natural terpene flavors make for a mighty tasty buzz. It's a good choice for concentrates connoisseurs and weekend vapers alike.