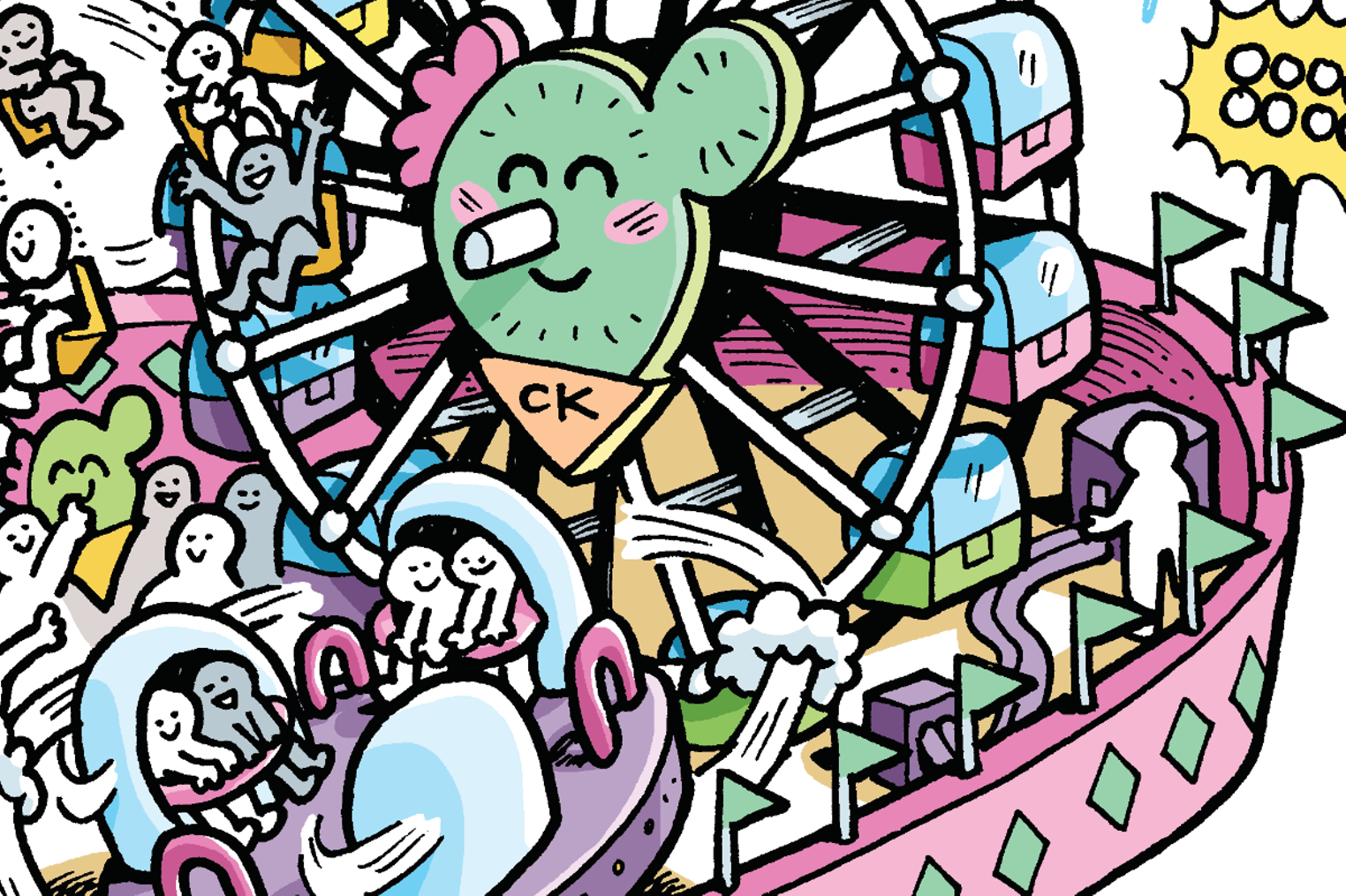 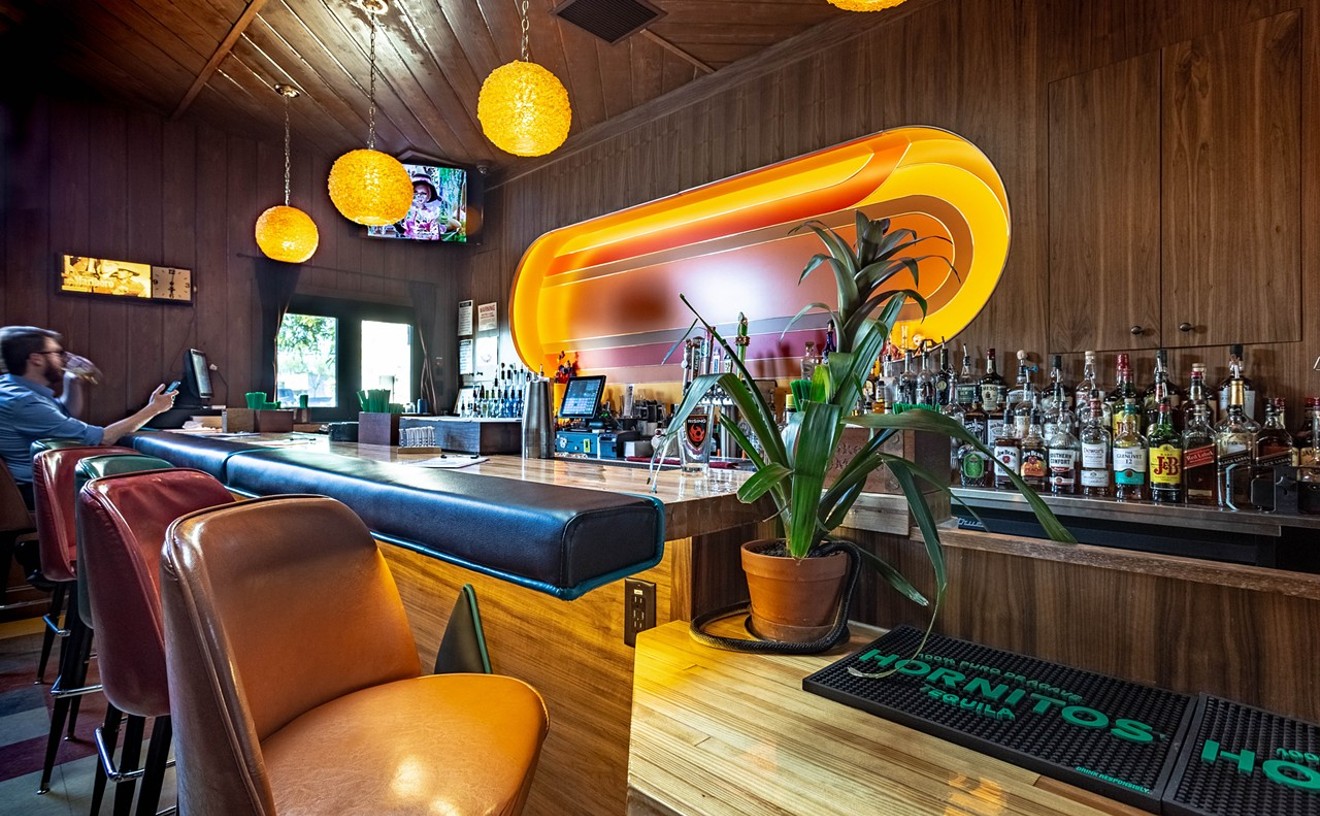 A great place to day-drink erases all sense of time. The back patio at Thunderbird Lounge does just that, making clocks and email feel about as relevant as they were 500 years ago. Part dive, part hipster hangout, part zero-fucks-given, and nothing but itself, Thunderbird provides a sticky haven to kick it with macrobrews, no-bullshit cocktails you could have made in high school, and newfangled hard seltzers. It's not a place to oooh and aahh over craft libations or design. It's just the ideal spot to have fun and snap open can after can after can, forgetting it all. 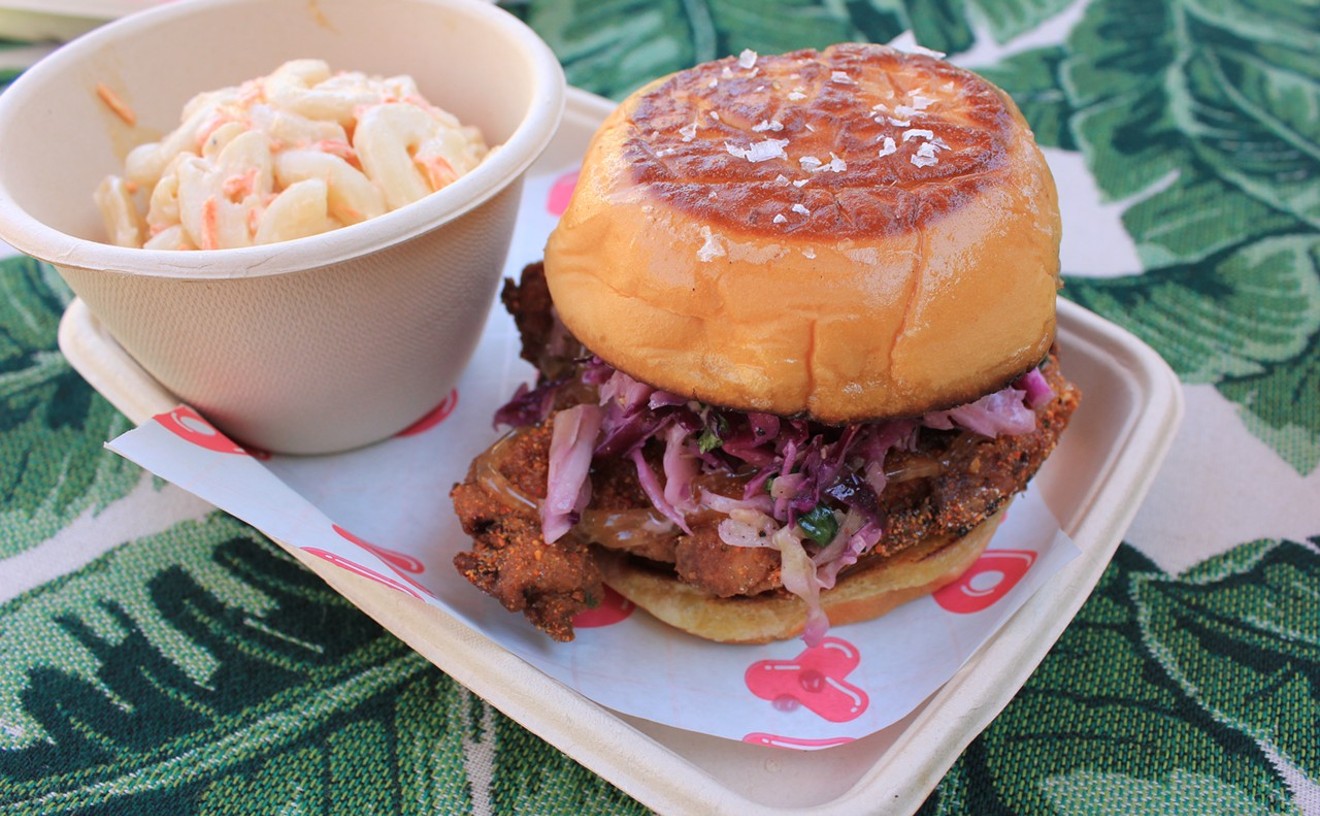 "Pool bar" might conjure memories of sugar-bomb frozen daiquiris or clubby bottle service that only oil barons can afford. Lylo changes the formula, introducing casual Japanese-leaning food alongside flawless original cocktails. These come from the mind of Ross Simon, the "cocktailian" behind Bitter & Twisted and Little Rituals. They spotlight rum (mostly), and they are bomb. Two rums are blended into soft-serve ice cream for the deeply nostalgic Dole Whip. Another two rums lace the pineapple and lime juice to make a complex, supremely refreshing rocks drink. And an artful, three-berry frozen daiquiri will banish even the saddest resort daiquiri memories.

On the (relatively rare) days when we feel like it'd be nice to escape Phoenix for a little while, but can't, we head to Casey Moore's. In addition to being one of the finest bars in the Valley, Casey's is also a kind of sanctuary. (It even looks like a sanctuary, much of it shielded from the street by trees and flowers and foliage and latticework.) Here, on the large, brick patio, the shade is abundant and Tempe's fading college-town vibes are well-preserved. You'll find cool professors, townies (but not the scary kind), pretentious English majors (god bless 'em), people who still smoke cigarettes (we don't judge), and lots of dogs. So much of Phoenix feels new, sometimes to its detriment. Casey's is that rare bar where the past is still alive and thriving.

The rooftop bar at Cambria Hotel Downtown Phoenix gives you a straight-shot view of all the best Valley landmarks: Camelback Mountain, Piestewa Peak, and all the construction happening along Portland Street down below. The high vantage point also means you can scout Roosevelt Row to see if the nightlife is popping — or finally dying down. Head up to From the Rooftop for after-dinner craft beer and cocktails, or before dinner for a dip in that shimmery rooftop pool. And for fans of hyper-local drink names, try the Camelback Sunset: passion fruit, sparkling wine, apertivo, and orange zest. Seating is first-come, first-serve, and reservations can be made for the furniture clusters — upscale patio furniture fancy enough to make you feel like you're in an old Pier 1 Imports commercial. 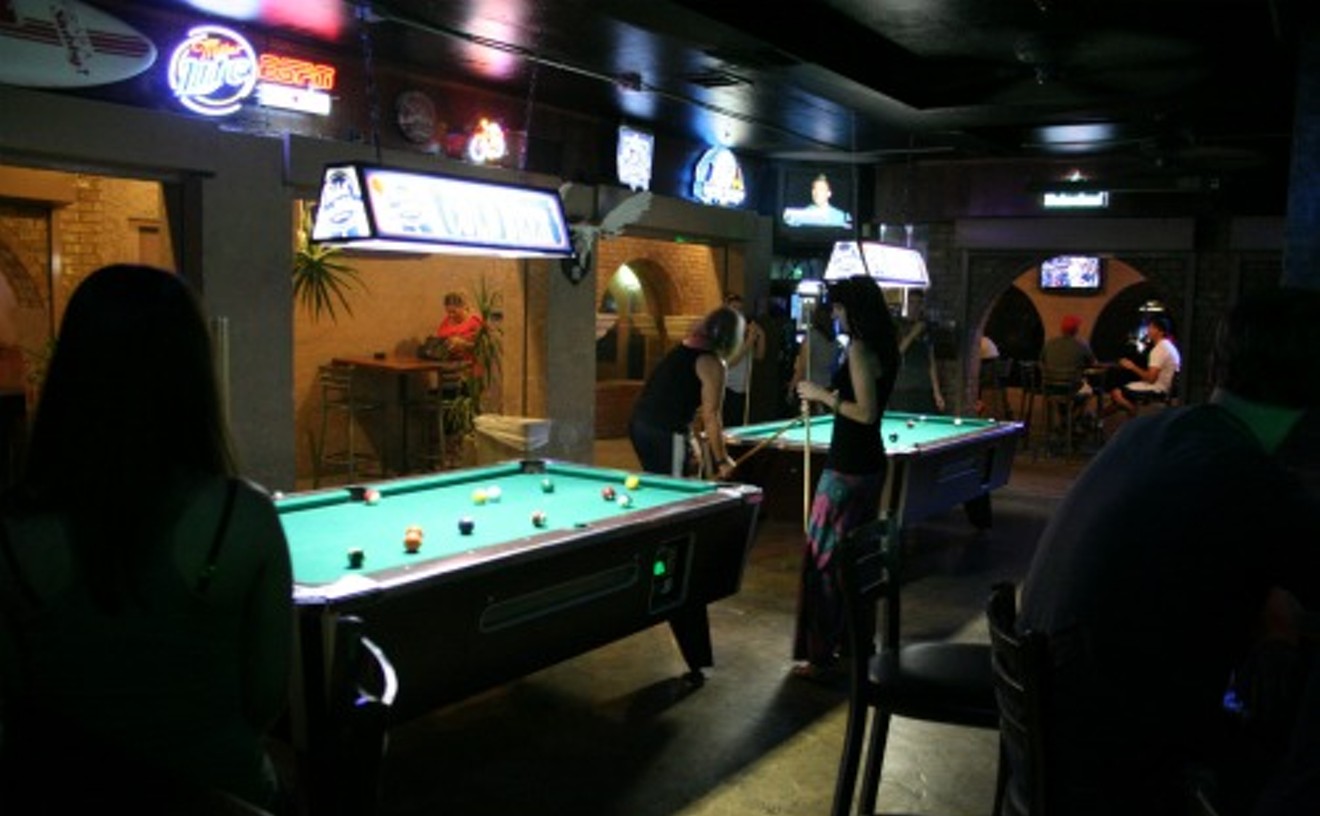 How many dive bars let you smoke a cigarette? From how many can you see stars? The ceiling at Ernie's is partly open, making both possible. And that's just where things start to get good at this north Scottsdale watering hole. A low-key, zero-judgment crowd kicks it at Ernie's until 2 a.m. every night of the week. Pool balls clack, karaoke voices howl, and people keep an eye on sports on high TVs, discussing (and half-forgetting) life while the drinks flow. Miller and well drinks are the norm. The menu doesn't fuck around, offering tuna melts and club sandwiches. A proper dive so far north in Scottsdale almost seems like a myth at this point, but that's part of Ernie's charm. 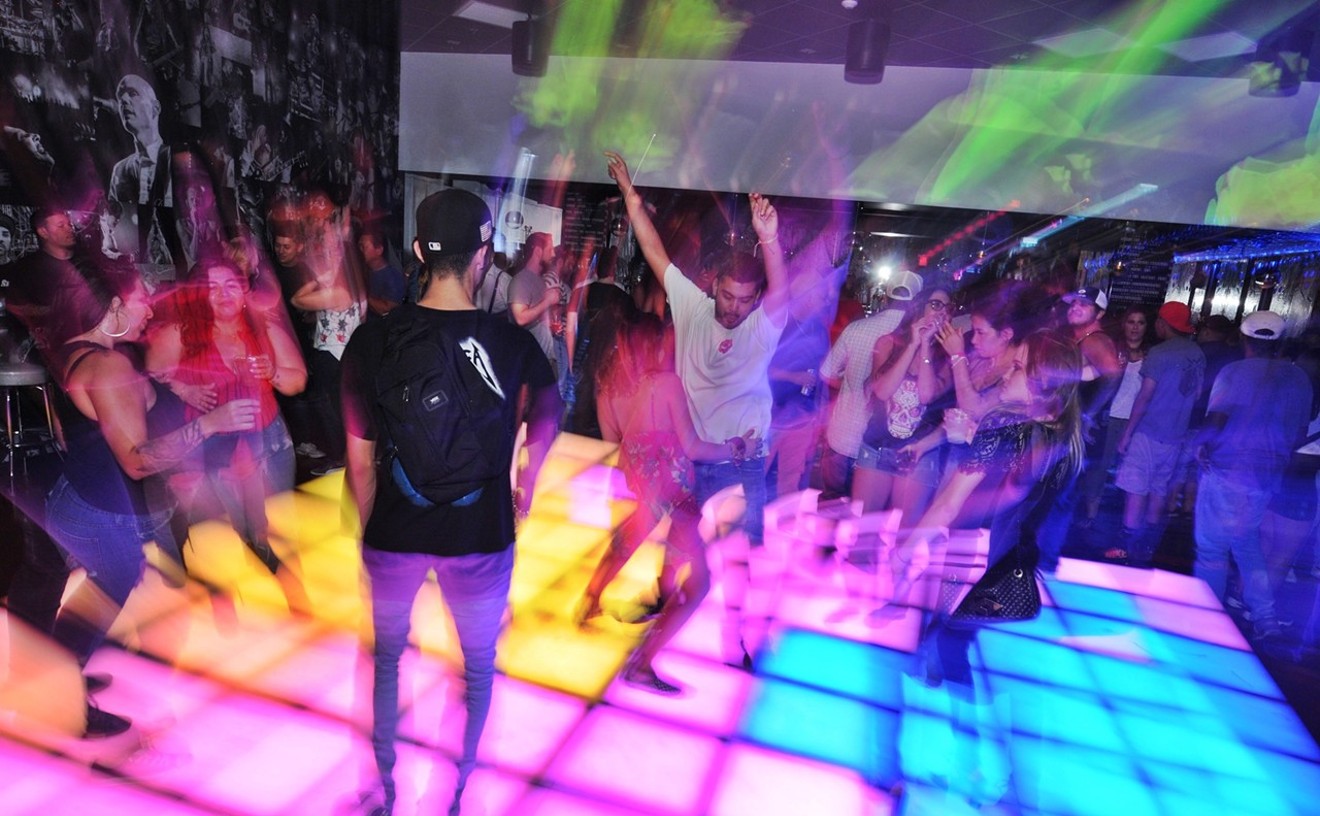 Ziggy's Magic Pizza Shop in downtown Phoenix uses some sleight of hand when it comes to its most unique feature: a secret entrance to Stardust Pinbar, the David Bowie-inspired game bar next door. Stroll into the pizzeria's back room and through a mock-up of a walk-in freezer door, which leads to the glammy lounge with its illuminated dance floor, Bowie-themed art and cocktails, and various pinball games. It's been a pleasant surprise for first-time patrons and went viral on TikTok after co-owner Ariel Bracamonte posted a video of the entrance in October 2020. One female viewer called it her "new favorite thing." Same, girl. Same.

In the 2010s, American cocktail bars were obsessed with the Prohibition-era aesthetic. All those suspenders and vests. Lots of ice blocks being clubbed with big wooden mallets. Handlebar mustaches. Rough Rider, which opened this summer in the basement of the Ten-O-One building, has a whiff of that vibe, but it draws its inspiration from even farther back in time. It's named after the Rough Riders, the ragtag cavalry of cowboys Teddy Roosevelt led during the Spanish-American War in the late 19th century. Cocktail-wise, the menu's split into four sections, two of which are very old-timey: cobblers (which include jam) and punch (made with tea). The place is properly dim and does a nice job evoking Teddy's era, with caskets jutting out of the walls, built-in bookshelves, ornate woodwork (including in the elevator), and a lovely white marble bar top. (The team behind Rough Rider also is involved in The Whining Pig and Pigtails Downtown.) The place looks built to last, like much of the stuff produced in this proud American era. Here's hoping the bar is, too. 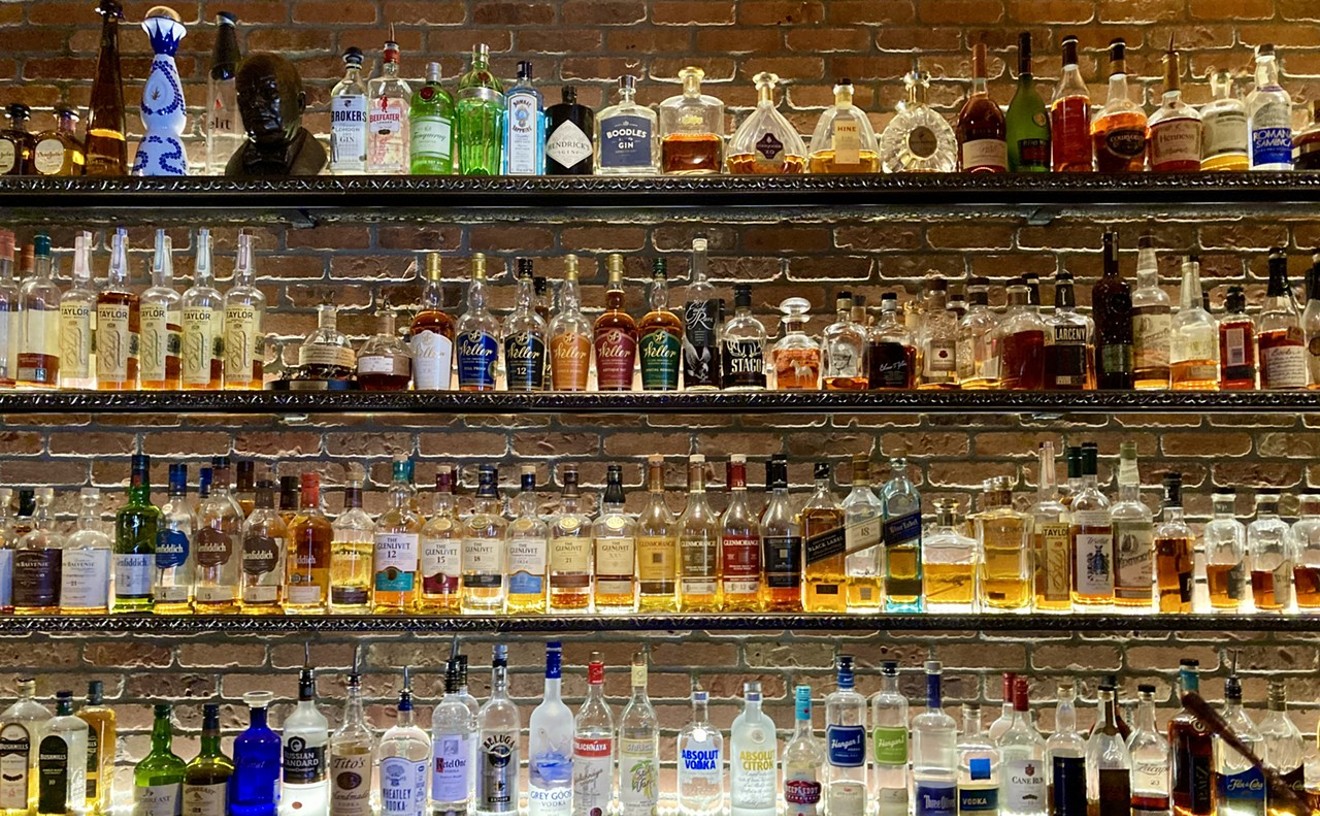 We didn't think that cigar bars were our thing — until we visited Churchill's. The intimate space in Arcadia isn't as big as other cigar bars in town, but what it lacks in size, it makes up for in class. The walk-in humidor has a well-curated selection of stogies, and the wood floors and club chairs make the space both cozy and elegant. There are three Churchill's locations in town, but only the 44th Street outpost has Winston's, a full bar with an emphasis on single-malt Scotch, bourbon, and rum (although they make a mean lemon drop, too). A top-quality filtration system means that even people who don't dig the cigar smell can hang out comfortably, so everyone is able to come and get the full Churchill's experience.

First things first: Go to The White Rabbit's website and sign up for emails. That's how you get the monthly password to this east Valley speakeasy, which is located underground in Gilbert's Heritage District. Once you give the password and find the secret entrance (we'll let you figure that one out yourself), you'll find yourself in another world, one that's dark, intriguing, and intimate. There's a limited menu of appetizers and desserts, but the drinks are really the draw here: Cocktails are inventive and intricate, and we've spent many a night taking sips from our friends' glasses, the better to try as many concoctions as possible. The White Rabbit isn't the place to have a rager; it's a spot to dress up for, soak up the old-school atmosphere, and imbibe in good company.

The indoor fun center — a place where people can hide from the sun while eating, drinking, and entertaining themselves in a variety of ways — is a popular destination in our desert climate. There are lots of choices around town, but we're currently delighted with Mill's Modern Social at the corner of Mill Avenue and Broadway Road, which opened earlier this year. The first thing you'll notice about Mill's Modern Social is the sleek, on-trend decor — it's bougie, but not in a bad way. There are games like cornhole, giant Jenga, and table tennis; an arcade room with darts, Guitar Hero, and Super Mario Bros. (arcade games are free on Wednesdays after 3); and an impressive number of pool tables. The food and drinks are pretty standard (burgers, flatbreads, appetizers), but they hit the spot. We find ourselves returning to Mill's Modern Social again and again for fun and food in a stylish atmosphere.