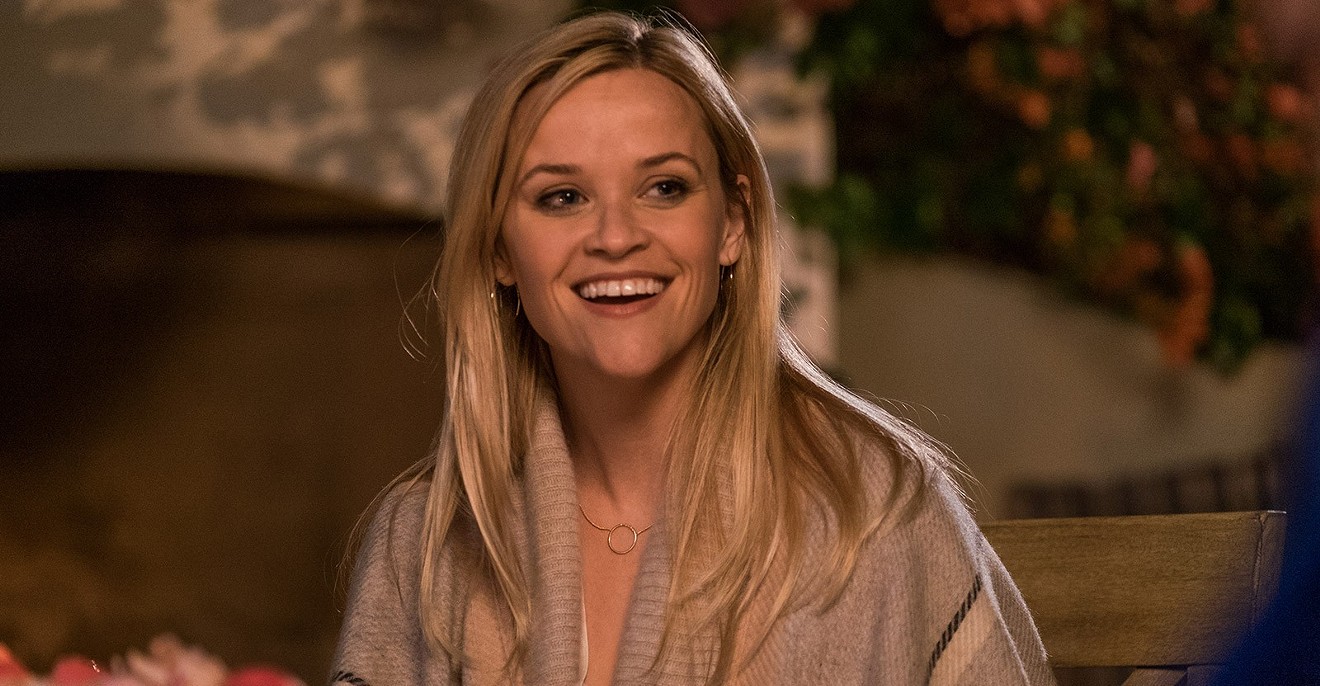 Reese unleashed. Open Road Films
Is there a more telling symptom of the sickness afflicting studio filmmaking right now than the fact that there aren't more good Reese Witherspoon comedies out there? In eras past, a hit could be built more years than not around a star like her. Sunny yet tart, she's a romantic lead with the comic chops of a scene-stealing character actor, one adept at playing just uptight enough that it's funny when her characters’ lives get upended. A tack-sharp motormouth, Witherspoon doesn't dial back her intelligence, but she still somehow always convinces us that the women she plays have learned something in their stories’ final moments. A beauty whose grin is wicked but whose smile, when it comes, is sweet as Southern tea, she's still always “relatable,” a term that industry types and political consultants use to mean that you could imagine her relating to you, dishing with you over drinks about the everyday hassles that she faces, too.

Her best work, lately, has been as producer or on the small screen, where HBO’s Big Little Lies showcased the range of her gifts — for anxious comedy, romantic melodrama and everyday ensemble chatter. Now she’s back in theaters in her first comedy since the 2015 bomb Hot Pursuit, and the news, I’m happy to report, is good: Hallie Meyers-Shyer’s cheeringly low-key debut, Home Again, offers proof that someone making movies understands what Hollywood has in Reese Witherspoon. I hope this star and this new writer-director make a habit of pairing up.

In its bright, canned look, Home Again resembles many breezy romantic comedies. Witherspoon stars as Alice, a mother who has settled in Los Angeles with her young daughters after separating from her husband. In L.A., she stumbles into a surprising hookup with an unlikely man and then must sort through her options and desires. (Should she maybe give the husband one more chance?) But beneath its commercial gloss, Home Again quickly credits its heroine with more radical options/desires than you might expect. First, her new fling is with a man at least 13 years younger than her, 27-year-old hunk/wannabe actor Harry (Pico Alexander), who has moved out west to make a movie with his brother and their best friend, a screenwriter. Meyers-Shyer wrings honest laughs from the age difference; the morning after, Alice, a maternal dynamo, washes and dries Harry’s clothes before he comes to. “You’re so maternal, Alice, that you should be a mom,” he says, not yet knowing the basics of the life of the woman whose bed he has slept in. But even after Harry meets Alice’s daughters, Home Again never for a moment suggests that it’s odd that younger men would be bewitched by her. In fact, rivalry flares among the boys. Turns out George (Jon Rudnitsky), the trio’s screenwriter, is smitten, too.

This being a movie, the lads all move into Alice’s guest house while they try to land their studio deal. (Her character is the daughter of a Cassavetes-like filmmaker, and she’s set up in his old home.) They charm Alice’s kids, whip up dinners and outdoor movie nights, and quickly ingratiate themselves into her life sitcom-style, where any of them can walk into her home at any time. It’s all quick and silly, but mostly played straight: Meyers-Shyer writes scenes rather than gag lines, and the movie only once slumps into the contemporary-comedy mode of setting up an awkward situation and then just letting the leads make faces. But I laughed through much of it, at barbed supporting turns from Lake Bell and Candice Bergen, and especially at young Harry’s cornball stabs at seduction. Alice always has to fight off a laugh when he starts, as he reels guilelessly through romantic words like he thinks any one of them might be the CAPTCHA code to unlock her, but then her eyes will quaver in mid-roll: She’s wooed by the effort rather than the poetry.

Witherspoon, all petered out.
Open Road Films
Witherspoon has always excelled at wised-up screwball romance, at seeming to fall in uncertain love, but here it’s never in doubt that Alice is in charge, even as, in the moment, she permits herself the loss of control. Here’s a mainstream romantic comedy where the romance isn’t that important and where the woman makes all of the decisions — both in front of and behind the camera. Meyers-Shyer is the daughter of Nancy Meyers (It’s Complicated, The Intern), who produces. Her film shares a look and a bop-along efficiency with her mother’s work, as well as a somewhat blinkered understanding of socio-economic reality. (Also, the only non-white character with dialogue is a disappointingly stereotyped Indian motel manager.) In addition, Meyers-Shyer exhibits an insistence in occasionally making a point about things. When Alice expresses reluctance about bringing her new lover to a dinner party, her friend observes, “All the single guys we know date women that age, and they’re not self-conscious.”

Home Again offers several small revelations, some so sneaky that you may not notice the movie has thwarted every expectation of its genre save one. All romantic comedies, at some point, spin a crisis of time management; it’s one of the few ways in which they’re like actual romances. Meyers-Shyer twice forces characters to choose between conflicting obligations — one more career-boosting round of drinks with a producer, or a bougie soirée with the new lover? It’s entirely understandable that the young man picks the former, and it’s just as understandable that Alice blows up at him. But then, unlike so many characters in less thoughtful rom-coms, she quickly gets over it and gets on with her life. Alice has no time for bullshit, just as Reese Witherspoon has none for roles that are beneath her. Home Again lets both reach for more.