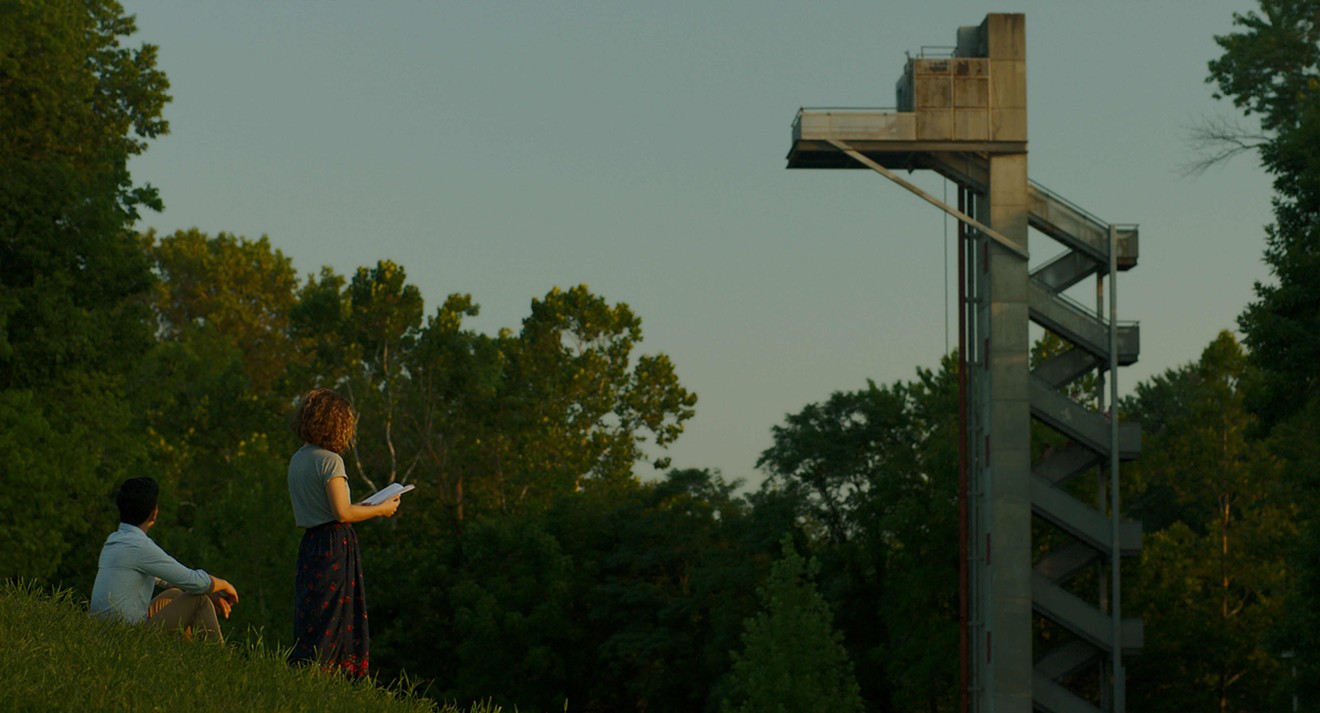 The modernist Midwest: Haley Lu Richardson and John Cho. Elisha Christian/Superlative Films and Depth of Field
In Columbus, architecture takes the place of emotions, to sometimes startling effect. An outwardly chilly, resolutely static film that nevertheless finds poignancy in the most surprising places, Kogonada’s directorial debut does a couple of important things so well that I can’t help but forgive the things it doesn’t. (Kogonada, by the way, is the name the Korean-born filmmaker likes to go by. We don’t know his given name, but he’s not exactly an unknown figure: He’s been posting fascinating video essays about cinema for some time online.)
The story is whisper-thin, and that’s mostly a good thing: When his legendary professor father winds up in a coma, Jin (John Cho) comes to the small town of Columbus, Indiana — a real-life cornucopia of modernist architecture, its landscape dotted with buildings designed by the likes of Eero Saarinen and Harry Weese — to help care for him. One day, over a cigarette, he meets recent high school grad Casey (Haley Lu Richardson), an architecture buff who works at a library branch designed by I.M. Pei. They bond, both bound to this Midwestern town for family reasons: Casey worries about what leaving for college would mean for her mom, a recovering addict, while duty and tradition compel Jin to stay by his father’s side.

But the drama isn’t so much in Jin and Casey’s interactions as it is in the unlikely and unreal backdrop against which they connect. Kogonada transforms his film’s spaces into expressive elements. The huge red-brick library where Casey works becomes a place of repetition and entrapment. The gleaming and immense central tower of an otherworldly suspension bridge feels like a transmitter to the divine. The façade of Columbus City Hall, which features two cantilevered walls that approach each other but never quite meet, creates a bewitching opening that, through Kogonada’s camera, conveys a sense of unreachable metaphysical yearning.

It’s not just these big-name modernist achievements that the director uses so effectively. There’s also the plush, carefully cluttered interior of Jin’s hotel, which should be inviting but feels forbidding. There’s the modest house that Casey lives in, which seems to be lit dramatically differently every time we see it. And there’s the narrow alleyway that seems to say something new every time the camera returns to it. It doesn’t matter if it was built by someone famous or if it’s just an accident of city planning — through the eyes of this director, it’s all emotional architecture, the angles and interruptions of longing and grief.

But while this novel, mesmerizing approach to space might be Columbus’ most notable or most immediately interesting element, it’s the lovely performance by Richardson that grounds the movie. She gives this bright, confused, gentle girl presence and depth that you sense from the film’s opening scene, as Casey asks her work crush (Rory Culkin) if he wants to go to a movie that night. The interplay of casualness and tenderness on her face is transfixing and totally natural. It’d be easy to overplay a moment like that, to completely disrupt the balance and rhythm of the scene, but Richardson doesn’t. She eschews acting tics or look-at-me indication. The feelings are there if you want to see them. (You could say the same about architecture.)

Columbus is so good in filling its blank spaces, in imbuing throwaway moments and silent gestures with depth, that it loses steam whenever it gives us dialogue scenes or mundane bits of story business. Casey and Jin’s conversations tend to be awkwardly written, spelling out too much of what we already know from the filmmaking and the performances. There’s even a part when they talk about the emotional valence of modernist architecture, just in case you really haven’t been paying attention.

The actors do what they can with their lines, but it’s not their delivery that moves us; it’s their glances and their physicality, and the graphic contrast between Casey’s soft features and Jin’s hard, angular face, with his sharp chin and high cheekbones and nearly square hair. (Cho does wonders with the character’s reserve, though he ultimately cedes the spotlight — as he must — to his co-star.) I realize that in asking for less talk, I’m asking for this already rather arty and beautiful film to be even more arty, and possibly even a little alienating. But the power of what does work in Columbus tells me that Kogonada and his cast could achieve such a thing. These two leads create their own ecosystem whenever they’re together, one that renders words meaningless.