Nora en Pure is scheduled to perform on Friday, December 8, at Maya Day & Nightclub in Scottsdale. Courtesy of MFM Booking

For a 25-year-old who waited until after she finished her undergraduate studies before really diving into the dance music scene, the intuitive Daniela Niederer (better known as indie dance producer Nora En Pure) may still be green, but she's quickly carved out her own summery, melodic house niche in the ever-evolving, often overly dark electronic music realm, and it's currently taking her all over the world, from Coachella later this year to club gigs around the world.

Her 2013 breakout hit "Come With Me" introduced the world to her refreshing brand of deep indie-house and spent seven months in the Beatport Top 100. Fresh off the release of her Morning Dew EP, a warm, forward-moving double track textured with piano-driven melodies and airy guitar riffs, Nora has enjoyed a surge in popularity over the past couple of years as the EDM craze has shifted gears from big-room bangers to a more toned-down, tropical house sound. Falyn Freyman

Alice Cooper is a giver. The man could simply tour and play the hits with no frills, but the Valley-based shock rocker insists on presenting an elaborate stage show every single time. Dragging a full-sized guillotine across the country would be more trouble than it’s worth for most people, but Alice isn’t one to leave the naughty kids out there hanging. He makes sure people get what they want — especially on the holidays.

For the last 15 years, he has traded in his straitjacket for a Santa suit and hosted Christmas Pudding. These charity concerts usually feature a who-who’s of classic rock royalty, putting on a big show to benefit Alice Cooper’s Solid Rock Teen Center, a faith-based nonprofit organization devoted to helping at-risk local children and teens.

But Christmas Pudding doesn’t just benefit Arizona’s kids, it’s also an opportunity for them to shine onstage. The Solid Rock Dancers will get a chance to perform — as will Amelia and Mariachi Juvenil De Mi Tierra, the winners of this year’s Proof is in the Pudding Musical Talent Search. The American Idol-style musical contest is open to teens, and it’s another way that No More Mr. Nice Guy gives back to the community.

For this year’s 16th annual benefit, Alice is bringing out the big guns. Joining the blood-soaked MC onstage will be fellow hard rock icons Slash, Edgar Winter, KISS guitarist Ace Frehley, and Judas Priest singer Rob Halford. The bill also will include Filter, Nita Strauss and Glen Sobel, SIXWIRE, David Ellefson, and the comedy and music of Gary Mule Deer. There will also be actual Christmas pudding for sale at the event.

Since it’s his shindig, Cooper will also deck the halls with his Grand Guignol rock songs. Considering his taste for the theatrical, he might have some holiday-themed mayhem in store for us. Perhaps he’ll take the angel off the top of the Christmas tree and replace it with his severed head, or lead the crowd in a singalong to “Only Reindeer Bleed.” Whatever Alice is gonna do, it’s sure to make any Grinch’s heart grow three sizes that night. Ashley Naftule 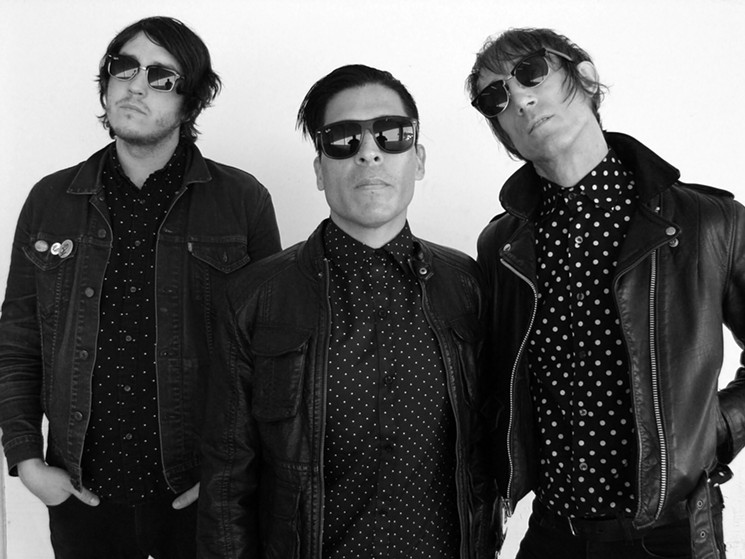 The disco-hybrid style of bands like Franz Ferdinand and Bloc Party — sometimes also called “dance-punk” — never quite got enough traction to qualify as a Big Rock Moment, but it was at least more exciting than other passing turn-of-the-millennium trends.

Among the groups that formed in the early 2000s and remain active, Moving Units may have had the most interesting trajectory. Known for songs like “Between Us & Them” and “X and Y,” the L.A. trio re-emerged from a nine-year recording break — during which time frontman Blake Miller became a successful DJ who scored with remixes of Le Castle Vania and Steve Aoki tracks — with last year’s Damage With Care (Metropolis).

Their latest release, Collision With Joy Division (RSRCH), is an exceedingly faithful, album-length tribute to one of Moving Units’ primary influences, the proto-goths and New Order precursors whom many would also call the original dance-punks. Their current tour, which stops at Valley Bar on December 9, is along the same lines, featuring a full set of Joy Division covers from the album. They’ll follow it up with a a set of Moving Unit songs. Chris Gray

Elements of industrial music, bluegrass, and Americana meet in unique ways with this Phoenix group. Noting what each member plays helps paint a picture that there’s nothing typical going on here. You’ve got Pete Petrisko – the conductor – playing shortwave radios, typewriter, and noisemakers. Joining him are Jim Dustan on guitar, bass, banjo, and live sound engineering, and Jocelyn Ruiz Dustan on clarinet, percussion, flute, and found objects. Erik Hunter handles drums and percussion, while Vic Void makes noise on instruments made from salvaged materials. The Dustans and Hunter are also in the local American band World Class Thugs.

The eclectic group creates soundtracks that accompany silent films, often performing live at screening events as well as local music venues. During screening events, RPM Orchestra brings films to life in new ways, as you watch the interplay between the two media.

It’s cerebral and generates a bit of fun cognitive dissonance as you think about the choices the band makes to mirror the on-screen action. It’s subtle enough, though, that you don’t lose sight of the film. For Petrisko, the best part is "the overwhelming positive response of audiences to our often wordless music."

This weekend, RPM Orchestra will celebrate the release of their new CD, Stepwise, during a performance at The Lost Leaf that will include live-scoring some modern and vintage silent film shorts that will be screened at the venue. Amy Young

Local rocker Ryan Rousseau is a connoisseur of unusual, experimental, fantastical, and out-there sounds. Just check out one of his sets around town as DJ Gila Man, which sees the Destruction Unit drummer spinning all-vinyl sets that include all manner of odd and eclectic selections of plucked from his extensive record collection. “i spin mostly cool old school shit i find at thrift stores or dollar bins like Tata Box Inhibitors, Seven Deadly Sins, dome, etc.,” Rousseau says.

This weekend, he’ll be doing just that at Valley Bar along with some friends during Brainwave! A Psychedelic Dance Party. Rousseau and his cohorts Jock Club and Deep Pill will serve up “tripped out sounds” inside of Valley Bar’s music hall, including techno, cosmic synth, minimal wave, acid, disco, funk, and space grooves starting at 10 p.m.

According to Rousseau, he and Jock Club will specifically playing old-school techno, hardshit, dub, grime, and hip-hop. (You might also hear Rousseau bust out with some “weird shit.”) Meanwhile, Deep Pill will perform a live techno set, which will help open your mind and get your body moving. Admission is free. Benjamin Leatherman

Country Music Hall of Fame inductee Ronnie Milsap has sung so many hits, he could fill his entire set this weekend at the Ovations Live! Showroom at Wild Horse Pass with with No. 1 country singles alone. The 74-year-old North Carolina native and country icon has won enough Grammys and CMAs to fill the top of a Steinway, and sent many of those smooth-sailing songs into Billboard's Adult Contemporary and Hot 100 charts as well.

His more recent efforts are nothing to sniff at either. Milsap earned strong reviews for 2015's Summer No. 17, a collection of pop and R&B covers spanning the '50s through the '70s and concluding with his 1985 classic "Lost In the Fifties Tonight." Jeff Balke